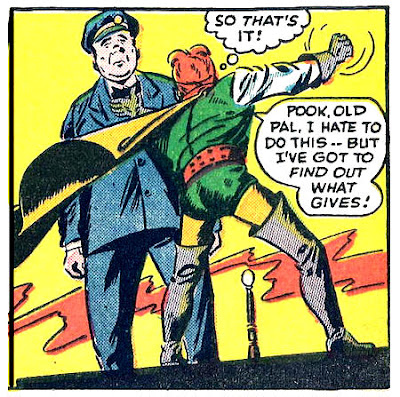 A common trope in 1940s superhero comics is a juvenile in costume teamed up with an adult, like Batman and Robin. The older costumed character gives orders to the younger. With Crash Kid it is the other way around. Rusty Adams dresses as Crash Kid and orders around an adult taxi driver named Pook. Crash Kid not only puts on a mask and cape, but as copy boy Rusty Adams he pretends to be a reporter on The Daily Herald. As “state psychiatrist” Franz Salzmann meets Rusty, making that claim of being a reporter, Salzmann says, “You! A reporter! Must be the manpower shortage.” (The war was still on when this published.) So if an adult — one with a medical doctor degree, no less — is fooled, then Rusty’s superpower is being a persuasive, believable liar.

No lie: Crash Kid only appeared in the two issues of Cannonball Comics, both published in 1945.

Cannonball Comics was published by Rural Home, which gave its address as 420 De Soto Ave., St. Louis, Missouri. I checked, and that address was of the World Color Press, which printed comic books. The contents were done by the same people who were doing mainstream comic books like Thrilling Comics, Black Terror, Giggle Comics, etc., edited by future Herbie Popnecker creator, Richard E. Hughes.

Artist and writer are not credited by Grand Comics Database. From Cannonball Comics #2 (1945): 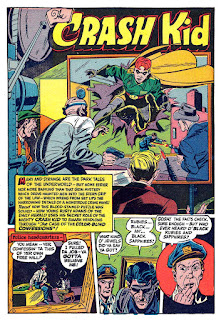 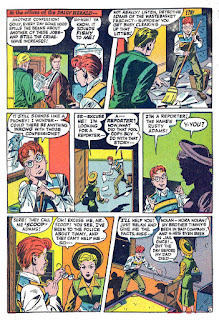 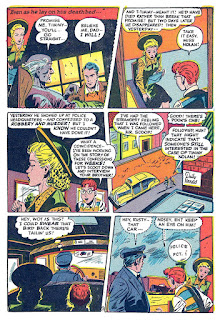 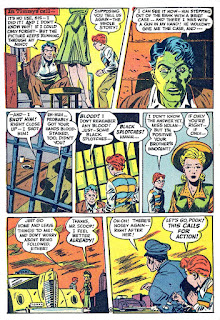 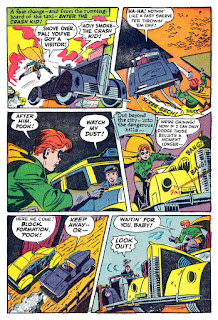 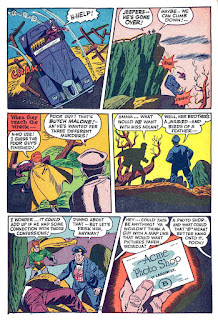 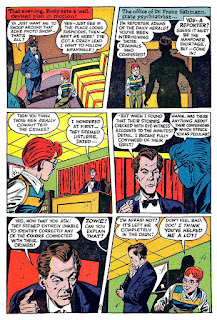 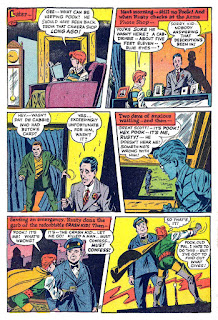 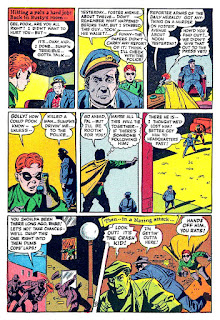 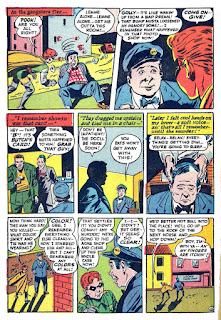 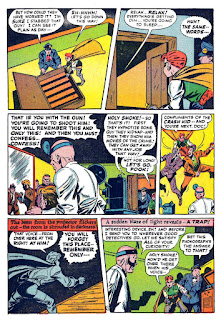 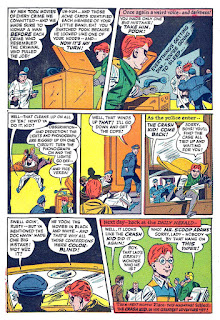 The basic story here is pretty good. The delivery falls apart at the point that the room is plunged into darkness; the event is so poorly shown that the audience must be told.

There is also the problem that, in real life, some people are not readily hypnotized. That's because hypnotism involves rôle-playing, which is why the behavior of those hypnotized has evolved dramatically as expectations about the effects of hypnotism have evolved radically. Some people would readily rôle-play as criminals, others would discernibly resist, and still others would just play-along only until they could talk to the authorities.

Daniel, if you don't mind another story from my boring life, my brother-in-law, Dave, told me of an incident when he was in the Army at Ft Dix, New Jersey. The troops were invited to a show by a hypnotist. After setting them up with whatever hypnotists do to hypnotize crowds, he told them to put their hands together, and they would not be able to pull them apart. He said, "Okay, now try to pull your hands apart," and those who were not hypnotized pulled them apart, but the hypnotized could not (my brother-in-law.) He was given a command that at a certain word he would stand up and in his loudest voice call the hypnotist a fraud. Sometime later the hypnotist said the word and Dave jumped up and screamed at the hypnotist, "You're a fake!" then sat down, wondering why he did it. Naturally, his actions got a big laugh, yet he wasn't embarrassed about it, even when he told me the story. At that point, since we were in a restaurant, I attempted to hypnotize him into paying for lunch, but it did not work due to my poor technique, no doubt.

Pappy, this was really fantastic. I'm ashamed I'd never heard of The Crash Kid- perhaps his two single appearances kept him from appearing in Jeff Rovin's 'The Encyclopedia of Super-Heroes'- but this is a very charming Golden Age story that actually reminded me quite a bit of contemporary MLJ stories. Great storytelling and layouts, to boot. It'd be fantastic if we could retcon Crash Kid somehow becoming Herbie Popnecker's father, as implausible as it would be! Clearly he changed his name after 1945 due to his mystery man exploits and because he was such a bullet dodging wunderkind in his teenage years, THAT'S why he's so verbally abusive to Herbie! You can have this idea for free, lol.

And Pappy, your life ain't boring!

Unknown, I'm not sure why Crash Kid would make a good dad for Herbie. Herbie's dad, Pincus Popnecker, is a verbally abusive father, so perhaps Crash Kid would be an improvement.