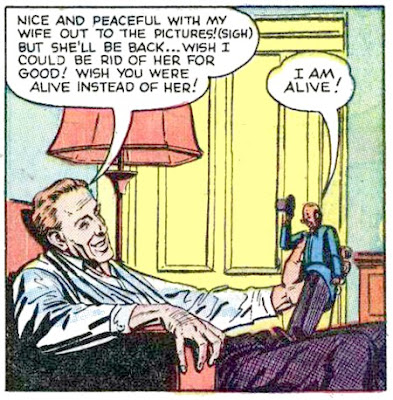 Dick Rockwell was an artist who worked in comic books after World War II. I have seen his work in Charles Biro’s crime and Western comics. He apparently stopped at Atlas/ Marvel long enough to do some work, including this story, “The Little Men.” Biographies of Rockwell always mention that he was the nephew of Norman Rockwell, one of the best known American illustrators of the 20th century.

In “The Little Men” Dick Rockwell used his uncle’s working method, taking photographs as the basis for his drawings. The story is fantasy, not a horror story, and features a nagging wife, one of the clichés of days gone by. My sympathies are with the wife in this story.

The last work I saw from Dick Rockwell was when he took over the Steve Canyon comic strip after Milton Caniff’s death. I found out he had been Caniff’s assistant for 35 years. Telling a story on his famous uncle, he said Norman Rockwell didn’t mind him so much working for Milton Caniff, but Uncle Norman had a problem with Caniff signing drawings that Dick Rockwell did. Alas, that is the nature of the comic strip business. Dick Rockwell also did courtroom sketches for years. I assume he got credit for them. 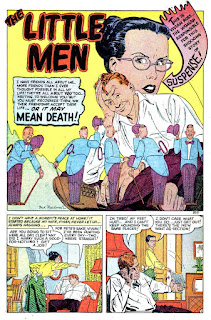 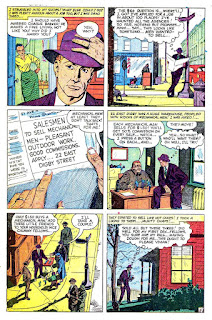 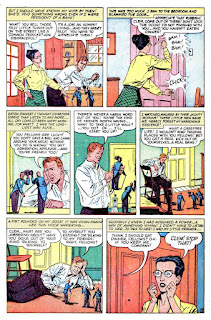 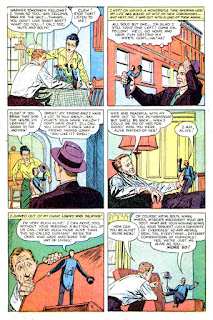 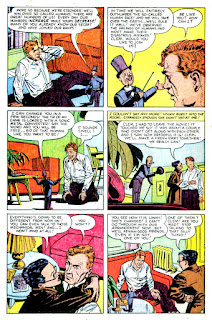 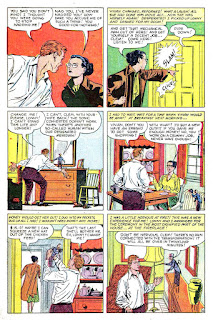 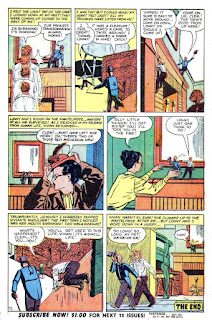 Elsewhere quite recently, when someone claimed that robots could not be moral agents, I made a similar point to that made by the mechanical man in 4:6; though I wouldn't claim that robots would somehow be more alive, any physicalist argument against their possible agency could be likewise directed against that of H. sapiens.

I imagine that one reason that the cliché of the nagging wife was so often used in popular fiction was that producers of that fiction were often found to be less-than-satisfactory partners by their girl-friends and wives.

(Fun Facts: The word “stereotype” originally referred to a method of mass printing, and “cliché” was in imitation of the sound made in quenching a metal plate created for such printing.)

This particular story would in one way have a greater currency now, when so many men prize collections of things once seen as for children.

Daniel, I was a printer in the early '70s, but don't remember stereotype being from that trade. Or maybe I just forgot. (More likely, that.)

I love the word cliché, and generally like words with accent marks because it makes me look more smarter.