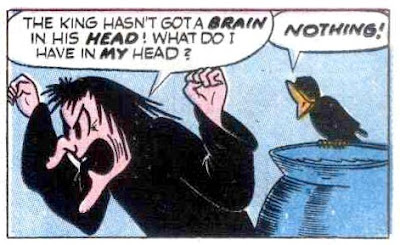 A few weeks ago I had three stories about witches for a Halloween posting. I originally intended to show a Witch Hazel story from Little Lulu also, but here it is, late.

John Stanley wrote the story for Little Lulu and Her Special Friends #3, a Dell 100-page giant comic from 1955. In the series featuring Witch Hazel. Stanley carefully crafted stories that are told on the spur of the moment by Lulu for the neighbor kid, Alvin. Of course Lulu makes herself the heroine, although as a “poor little girl” living with her mother in dire poverty. Trust Stanley to make a dreadful situation funny. Lulu is a middle-class American kid living in the suburbs with her mom and dad; the same world as I, old Pappy, grew up in. I wish my own world had been as interesting as Lulu’s.

Finished artwork is by Irving Tripp, from rough layouts by Stanley. 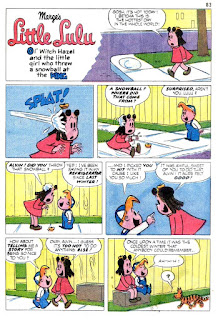 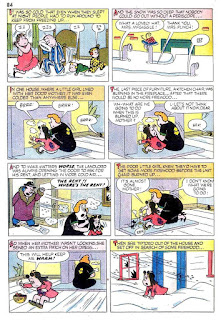 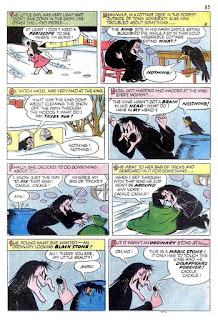 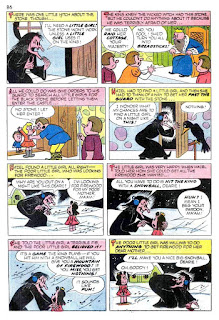 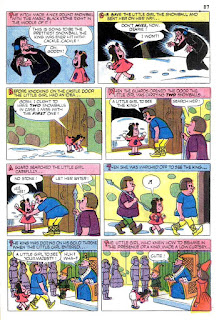 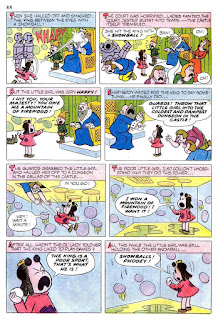 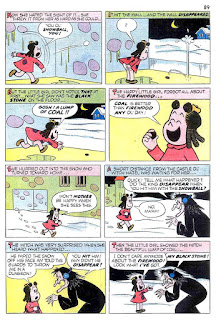 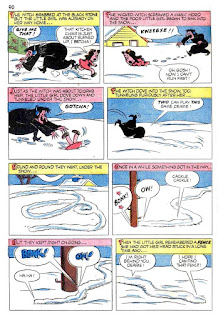 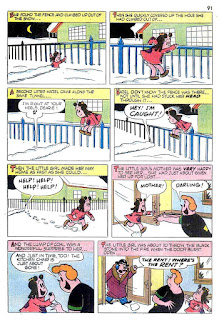 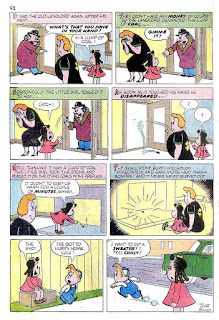 Actually, I'm a bit surprised that the undertones of the story weren't darker.

In any case, the story reads like a script for an animated cartoon from the same era. One could imagine it delivered in the style of Famous Studios, of Terrytoons, or perhaps of UPA.

Had Stanley been a bit more conversant in physics, he might have made a reference to black-body radiation at the conclusion to the tale-within-the-tale. Indeed, had the story been written much later, then the black stone might have been reïmagined as a captured black hole, both effecting disappearances and emitting Hawking radiation.

A great story from John Stanley. I was a little worried for Alvin for a while. I was worried Lulu hadn't really appreciated being hit with the snowball & the snowball WITH A ROCK IN IT was telegraphing an act of revenge, but luckily no.

Daniel, I like the black hole idea...but I think, had Stanley known of black holes, that it would involve Tubby. His life sometimes was a living fantasy, rather than Lulu's storytelling fantasies.

(Sorry, can't read your name), Lulu was a forgiving type of character. The kids around her could be mean or stupid or annoying (like Alvin), but she never seemed to be angry.

When I ventured beyond superhero comics to humor during my childhood -- or perhaps you could say humor/adventure -- it was always to characters familiar to me from Saturday-morning cartoons and the like. Gold Key had Disney, Warner Bros., Hanna-Barbera, and other Saturday-morning-TV licenses; I wasn't even sure if Little Lulu was published during the '70s, reprint or otherwise, until checking the GCD just now. Coming across her stories in my adult years, they're delightful, and I see why they -- John Stanley's in particular -- have been favorites of readers of a slightly older vintage.