Number 2472: The man with the magnetic personality 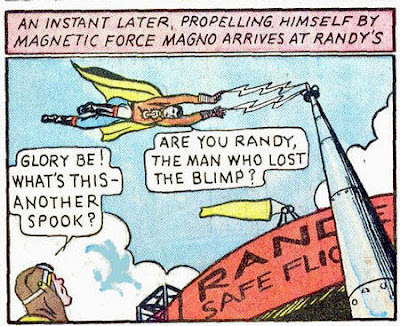 I imagine a 1940 Ace Publishing Company editorial conference on the creation of Super-Mystery Comics. Men smoking cigars, jackets off, wearing white shirts and suspenders to hold up their pants are kicking around ideas for superheroes. Someone says “a magnetic guy.” But what would be his origin? How did he get those magnetic powers? Well, who cares? It's a comic book, and they are flooding the market so let's get it out now and worry about the details later.

That is just from my imagination, but what I understand from Toonopedia is that Paul Chadwick, who created and wrote Secret Agent X pulp stories, also wrote the story of Magno, the Magnetic Man. Chadwick used as its basis a story he wrote in 1934 called “The Octopus of Crime,” starring Secret Agent X.

In future issues Magno got a boy named Davey to help him. In this first story Magno is alone, yet up to the task. The artist on the story is unidentified. 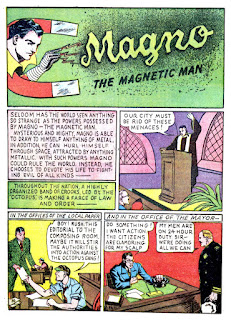 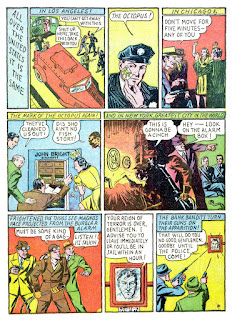 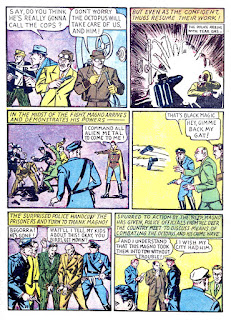 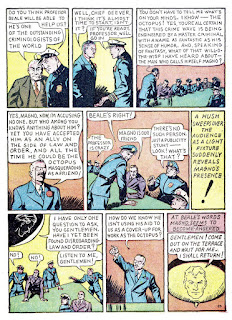 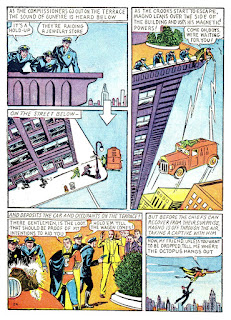 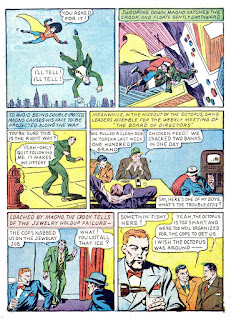 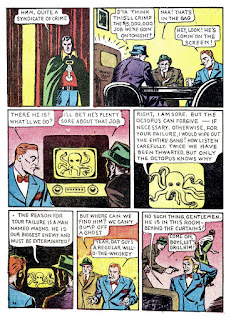 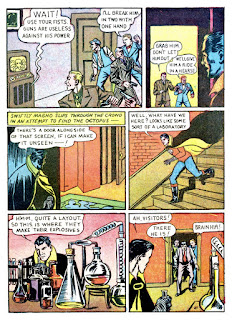 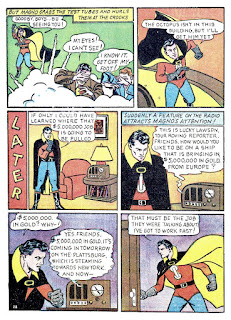 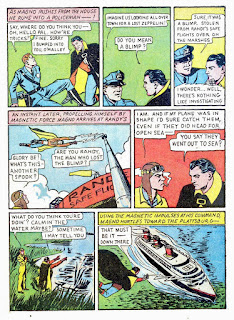 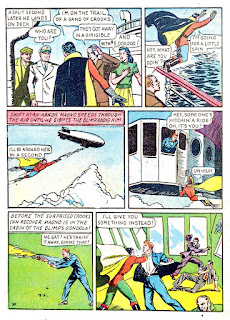 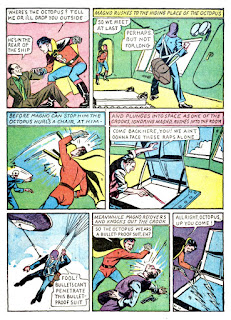 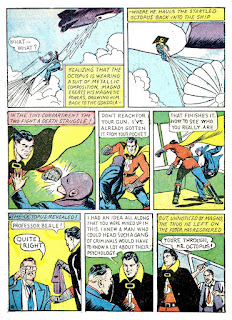 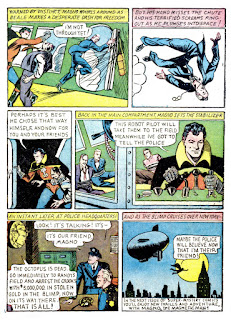 Well, Professor Beale was still wearing that bullet-proof suit, so it seems that Magno chose to let Beale fall to his death.

Magno is, in this story, yet another pre-war superhero who behaves as if regarding himself not only as being superior but as a Master of Men. By the time that I started reading comic books, most of the heroes had quit that bit, though Jack Kirby hadn't kicked the habit of cranking them out that way and Stan Lee would go along.

Fun(?) Facts: Blimps and zepplins are both dirigibles; the former lack rigid framing for the receptacles of gas. Goodyear has replaced its blimps with zepplins, but still calls them “blimps”!

Sorry I haven't been around lately!

I love the "mummy" hands. It's one of those things an artist thinks is cool and then instantly regrets every new panel, and I also love how he seems to be sitting around his house in his costume, and then basically has a conversation with the radio!

Unlike a lot of 40s heroes, this guys power is pretty well defined and nothing outside that powerset happens, which is pretty refreshing, though the power is still treated pretty god-like.

Good action art for the 40s!

Brian, thanks for the note. Always nice to hear from a longtime reader like you.

Your comment on the artist made me realize I forgot to list him; art is credited by the Grand Comics Database to Louis Ferstadt, or more likely his art shop, which did a lot of stuff for Ace Publications in the forties.

Daniel, I can imagine having a super power would give one an exalted view of one's self, doesn't one agree?

I have ways of crushing my fantasies of having super powers by thinking, if it was given to me, above all other humans, why could it not be taken away also?

I imagine myself flying and having that power suddenly go away. Look out below...SPLAT!

I think that ruined fantasy may have come to me from real life, years ago, when my usually reliable car died in the middle of a busy intersection. I got it started and got out of the intersection, at which time it quit again. I would not be so fortunate with a major super power like flying suddenly quitting.

My problem with these heroes is the underlying narcissism of the stories; the heroes cannot merely be magnificent or think themselves magnificent; the other characters must recognize and acknowledge that magnificence or Pay the Price!

Yeah, my human powers sometimes cut-out on me in painful ways, and I'd be afraid of falling from the sky or being crushed by your stalled car after lifting it over my head.

Daniel, it was a Mustang, so at least it wasn't a big car you'd have to lift.