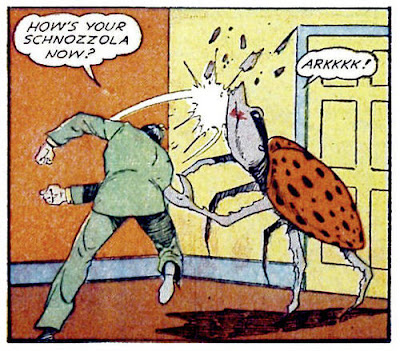 It is the American Thanksgiving Day, where the traditional bird of choice to eat is a turkey. A turkey is not very intelligent, so I have named my annual award the Thanksgiving Turkey Award. It gives me a chance to show what I consider the worst/most unusual/weird or whatever-it-is comic book story chosen for the year.

This one is definitely one or all of those. It has a mad scientist who sends huge bugs to kill children, and a couple of killings are shown in graphic detail.

Dan Hastings, according to Public Domain Super Heroes, is a copy of Flash Gordon, which was not unusual at all in early comic books. It explains why he wears a gaudy costume yet uses his real name. Dan has a Dr Zarkov-like friend, Dr Carter. Dan and Dr Carter’s daughter, Gloria, are a couple. After the gruesome beginning of the story, it turns into another mad scientist story, with the girlfriend of the hero, in a bondage scene, being threatened with death. The anonymous comic book writer in 1942 had a disturbing imagination.

The story is from Scoop Comics #2, and skeletons of bug-stabbed infants earn this story three and a half turkeys.

No writer or artist is credited by the Grand Comics Database. 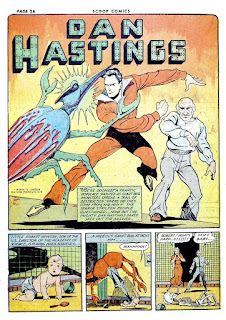 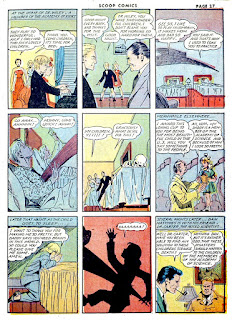 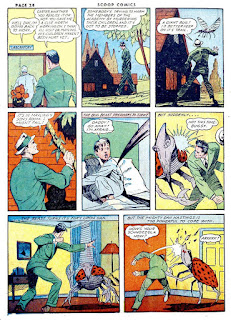 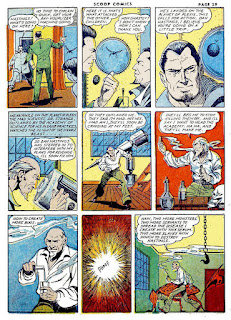 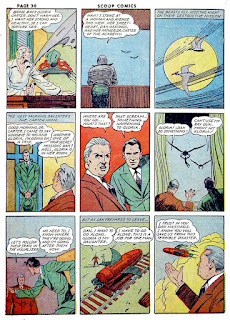 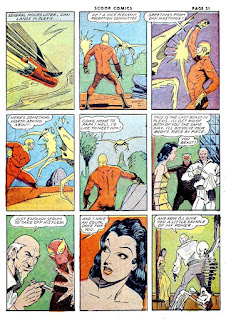 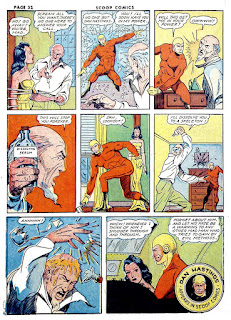 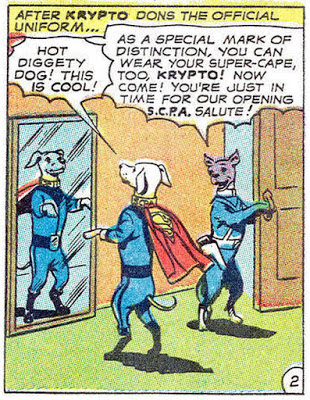 Ye gods. And I thought Fletcher Hanks' stuff was messed up! As with the two young men who have their throats torn out in that nasty Crimebuster/Iron Jaw story you covered a little while ago, the author spends a surprising amount of time building the characters of these victims before summarily slaughtering them; the bit in which the Shirley Temple knockoff prays for "brains" seems particularly mean-spirited. Somebody had...problems.

I think that we're once again looking at work in which Charles Sultan had a very able hand. He was working for Chesler at the time, and did some of the covers for Scoop Comics.

I've been infuriated with other alleged scientists, but I've never considered dissolving the soft tissues of their children. Somehow, it seems … well, wrong.

https://www.comics.org/issue/1967/#1153491 reveals there was a text story in the same issue which was the last appearance of both Dan and Dr. Strange.

I'm late to the thanksgiving party, all that is left is a couple turkey bones. Wait, those aren't turkey bones!

I love how strangely grisly this is ... yet ... can't be consistent in method. Why not just have the giant bugs stab them? Somehow, they carry around the skin dissolving chemical (how) to turn them into perfect little skeletons. And who was the other person tied up? It's a mad house, I tell you!

I actually like the art in this, it's very competent for the time.