Number 2409: A Kirby Killer: the story of the Tri-State Terror 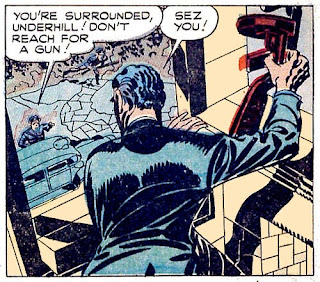 Wilbur Underhill was, as the story says, a real person. He was a crook, ex-convict who escaped prison twice, a gangster who was wanted for various criminal acts in the early '30s. That was a golden age of crooks in cars, going from town to town robbing banks, shooting people...you know, all the usual psychopathic behavior. Underhill was known, among other nicknames, as the Tri-State Terror. I was surprised reading this Jack Kirby version of Wilbur’s story because while it compressed his story, it actually ends with the real story of Underhill’s death-by-cop; he was shot many times but got away from police and died on a bed in a furniture store.

I have been reading The Jack Kirby Collector #16 (1997), with a look at Kirby and Simon’s crime stories. Kirby liked drawing stories about gangsters. As writer Tom Field quotes Mark Evanier, speaking of Kirby’s crime stories from In the Days of the Mob from 1971, for DC: “‘He was a fan of that stuff. He had met a lot of people who knew the gangsters.’ Although Evanier and Kirby’s other assistant, Steve Sherman, did a lot of research on gangsters and the Depression to help enrich Kirby’s historical fiction, Evanier concedes, ‘Jack probably could have done these stories from memory and they wouldn’t have been much different.’”

In the Days of the Mob wasn’t given a chance to succeed, unlike the comic books Simon and Kirby were creating in the forties for Hillman and Prize, when crime comics were being produced to much notoriety and big sales.

“The Trail of the Gun-Loving Killer” is from Real Clue Crime Stories Vol. 2 No. 4 (number 16, 1947), and is credited to Jack Kirby as penciler, and partially inked by Joe Simon. Kirby is credited by the Grand Comics Database as inking pages 1, 2, 5 and 7. No writer is credited. 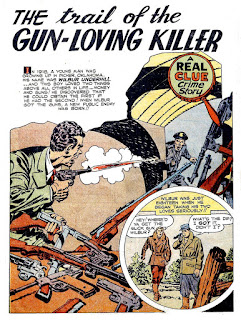 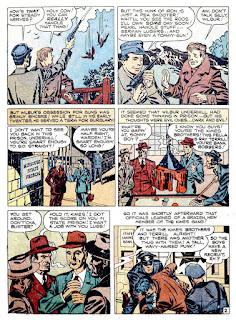 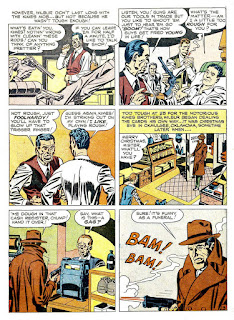 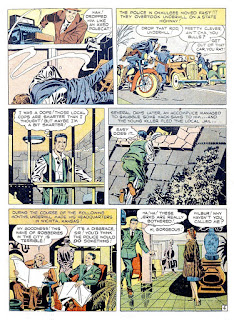 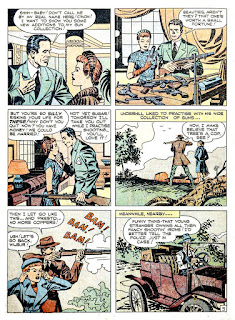 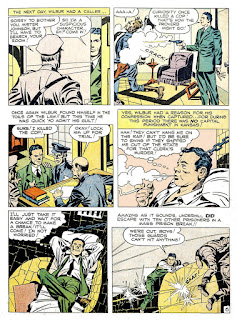 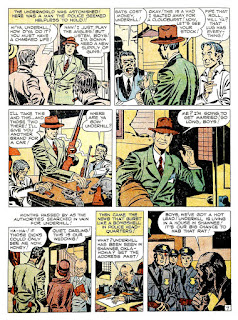 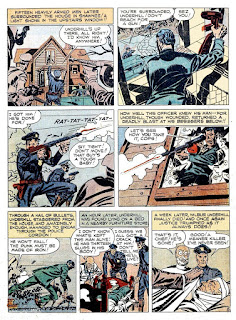 A bit more than two-and-half years ago, you offered us a different telling of this story.

I always love to go to wikipedia after reading these. The most interesting change is wikipedia says he was shot 5 times (so the max # of slugs in him would have been 5) and the comic says 13 slugs!

I can believe somebody making it after being shot 5 times depending on the place, but at 13 I doubt you'd be doing anything but dying quickly!

Daniel, there are so many different versions of stories about famous gangsters that it is like reading about a different guy with each version. That is why it doesn't bother me to "repeat" like that.

It's when I show the same story a couple of years or less after running it for the first time that I kick myself. I have taken to checking to make sure I don't commit such a fubar, but sometimes they slip by me.


Brian, the version of the Underhill story that Daniel is linking to also says 13 bullets in him.

If it were five bullets then I can see some, if not all, missing vital organs. Depends on how good a shot the cops were. I don't know what caliber pistols the cops were using at the time. I agree with you that 13 seems like an awful lot, and odds are some would enter a vital organ or two. But both versions of the story say that Wilbur Underhill lived a week after being shot. Going to the Wikipedia entry, as you did, I see that there were local police and federal agents in on the attempt to capture Underhill. Were the feds firing machine guns as Kirby shows in one panel? Maybe. Underhill was shot on December 26, and died in hospital on January 6, which is 12 days, so it's probably safe to say that whether shot with five bullets or 13, he didn't survive his trip to the hospital.

The 13 bullets story might have been concocted to make it seem better. With a bunch of cops and feds firing at him, it could have been considered embarrassing to admit they hit him only five times.