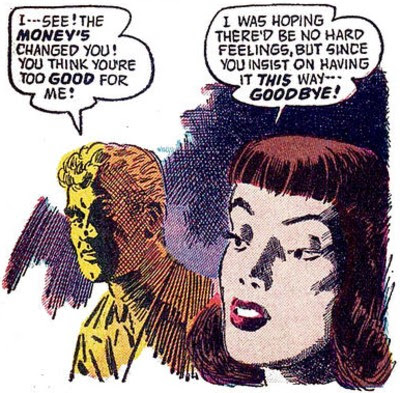 The course of true love never did run smooth, as the Bard said. It is not only true in plays, but in every love story I have ever read, seen in a movie, or personally lived through in my life. Love comics are easy to understand because they are almost always about a young woman being loved by a fellow she rejects for another fellow, who turns out to be no good for her. She goes back to the first fellow. The stories always end with an embrace and kiss. Ah, love.

So “Black Gold, Broken Hearts” is a typical story, but has our girl Millie’s struggling ma and pa suddenly rich from the discovery of oil on their property! Millie can get rid of Tom Barrow, who loves her, and go to college. It seems her main interest in college is not a degree, but to learn to act snooty and put on airs to match the other rich gals. Doing that attracts Stanton Forsyte who appears to be as ritzy as his name implies. It all gets sorted out, of course, but in these love stories I notice the nice guy usually wins and doesn’t hold it against the girl, so he is a noble swain, after all.

Before reading the story, though, Romantic Adventures, which is the source, used to also include a page or two on how girls can avoid losing their love once they find each other. The pages I have included aren’t credited for writers, so I don’t know if they were written by a woman or a man. I opt for a man because of the whiffs of male dominance, but on the other hand, such things were taught to girls in days gone by. 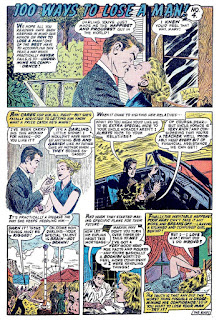 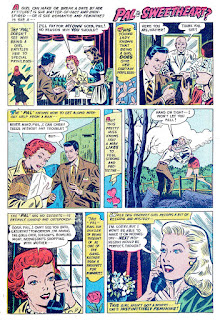 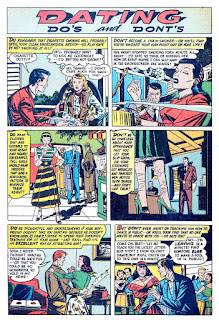 “Black Gold and Broken Hearts” is from Romantic Adventures #58 (1958). No writer is listed by Grand Comics Database, but Kenneth Landau did the artwork, as well as the page, “100 Ways to Lose a Man,” above. No writers or artists are listed for the one-page advice fillers from Romantic Comics #14 (1951), “Pal or Sweetheart?” or “Dating Do’s and Don’ts.” 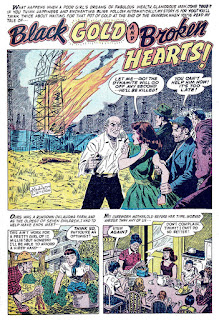 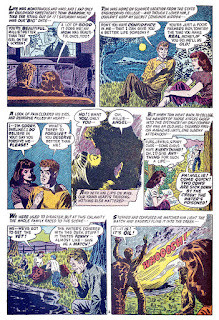 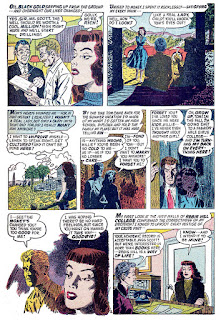 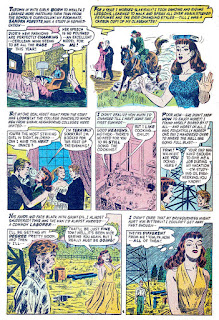 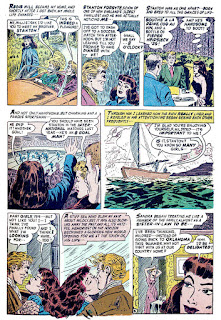 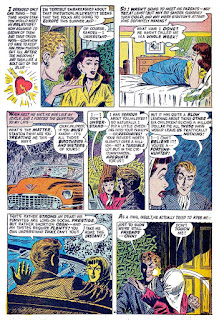 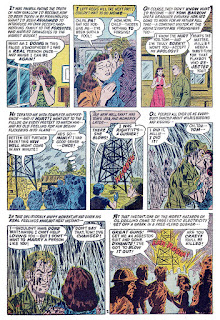 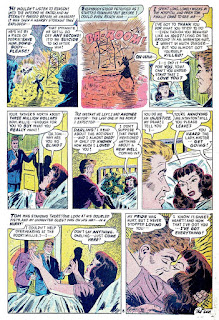 A man who lost a woman because she didn't value him might have no hope of her returning for any reason other than that she learned that the alternatives to him were worse than she'd imagined. But what a pathetic situation that would be for everyone.

Still more pathetic would be a case in which she hadn't really learned that, but had been so wounded by one experience that she couldn't bring herself to try again, and sought to return to the man whom she had left.

This appeal of this story to some men is understandable. Sometimes, it's hard to stop loving even when one realizes that the other person values the wrong things and thus should not him- or herself be so valued. Even setting aside love, it can be hard to find oneself not valued. And most guys are not going to be able to demonstrate that they had some great, previously unrevealed virtue. But it's just not healthy to hope for Millie to get hurt and return with her tail tucked between her legs.

Since Millie didn't get much of a fling with Stanton, and he didn't seem to find much desirable about her other than her father's money, any appeal to female readers would be somewhat mysterious.

And though I wouldn't argue the story wasn't sticking to tried & true plots, I don't think he was exactly a pushover in that she did have to prove she had changed.

That's nice art from Kenneth Landau, too. You don't usually think of artists who were good at horror and good at romance, though--thinking as I write--Bill Everett definitely was one.

バーンズ エリック, During my time on this blog I found an artist like Ken Landau to be interesting because his style was so distinctive. It helped that he distinguished his artwork from that of others with his crosshatching and pen lines. Oh, yeah...he also signed his name, which I have mentioned before. It takes away the guesswork as to who drew it.

Daniel, maybe we could say that at the time comics was mostly a man's world. I don't know who wrote it, but based on your observation of a lack of female appeal it was likely a man, perpetuating stereotypes of the era.