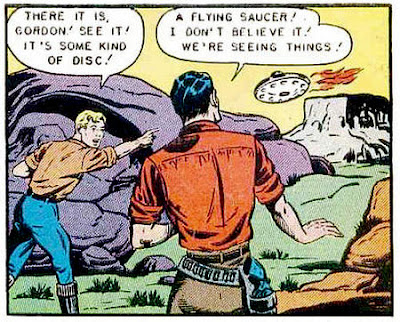 Captain Science and his young pal chase down a flying saucer sighting, and find not only a crashed saucer, but an almost-dead alien, who tells them why he is on Earth. For me the story is interesting because not only does it sound like the Roswell crash story (supposedly taking place in 1947, three years before Captain Science #1, from 1950), but it shows an early conception of what a flying saucer might look like. Like commercial and military aircraft the public were used to in those days, it has rivets.

The Grand Comics Database lists no writer, but credits Gustav Schrotter for pencils and inks.. 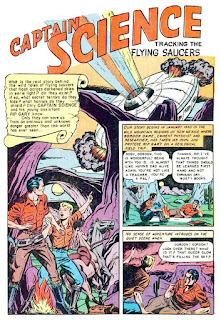 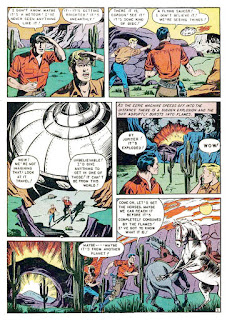 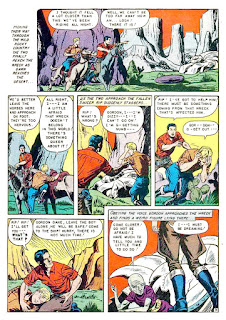 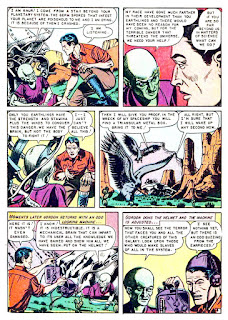 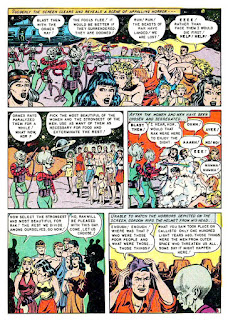 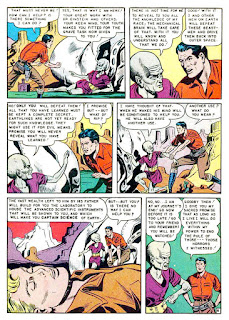 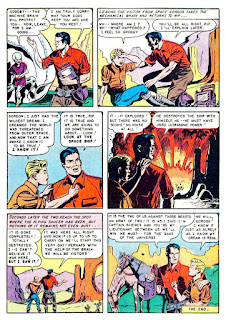 Captain Science is more famous for featuring early artwork by Wallace Wood, also published in the first issue. Just click on the thumbnail. 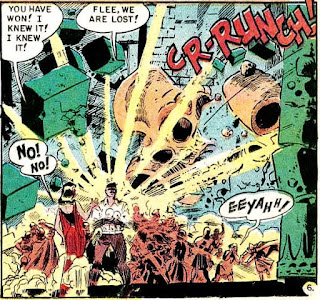 As I've probably noted in a comment to another entry in this 'blog, it's possible to measure time with units of distance. But the conversion factor is the reciprocal of the speed of light, so that, if time is measured in light-years, 1 light-year is the equivalent of 1 year, making the practice silly.

Captain Science seems to be a low-rent version of Curt Newton, a.k.a. “Captain Future”, a.k.a. “the Wizard of Science”, a character created by Mort Weisinger for the pulps (with much of the actual writing by Edmond Hamilton). Curt Newton was a significant fictional rôle model for me as a child. He did not have a boy sidekick, but instead had a support team of a robot, a synthetic humanoid, and a brain-in-a-box. (I never desired such teammates.)

I have intelligent friends who believe that some very advanced technology is behind stories of flying saucers; but I don't. I don't imagine aliens travelling enormous distances or across a fifth dimension only to have a look and pull a few pranks. I don't believe that, 70 to 75 years ago, there were some great scientific leap sponsored and kept generally secret by people of the sort who ruled and rule us. I find it a stretch even to believe that the matter is political theater. I could believe that a mindless, little understood geophysical phenomenon were involved, with no actual craft darting about.

Your remark about rivets touches upon on of the sources of my disbelief. Descriptions of supposèd craft have evolved with expectations. Around the turn of the previous century, they were like dirigibles. In the middle of the century, they were shiny saucers. Later, as Star Wars had an effect, they could be black or grey, with mostly planar surfaces.