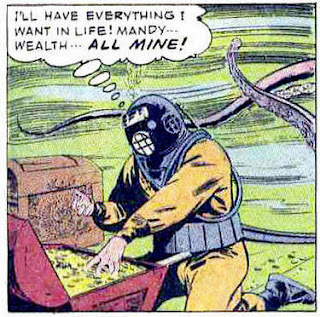 Johnny Craig came back to comics a few years after leaving the field in the mid-fifties. But happy as I was to see his work, it wasn’t the same to me as what I was used to in his time with EC. In the case of “The Treasure of Bad Luck Point,” from Unknown Worlds #47 (1966), I wondered what Craig, a writer himself, thought of this story by ACG editor/writer Richard E. Hughes. The backstory of the pirates takes 7 pages, and the hero of the tale doesn’t appear until page 8. It’s another of Hughes’s underdog stories, which asks the question, can a poor tugboat owner win a rich girl? Well, no. He has the girl’s love, but does not have permission from her father to marry her. That took me back. The story takes place in modern days, and in 1966 that attitude was a few decades old, at least. Dad could express his displeasure, but he could not keep her from marrying anyone. Yet his daughter doesn’t fight for her boyfriend. I am sure, like her dad, she was thinking of a lower standard of living if she did marry the guy. She also might have thought she’d earn the nickname of Tugboat Annie.* [SPOILER ALERT: It’s only when, despite being guarded by a ghost,  he finds the pirate treasure, that her dad agrees to her marriage. Avarice wins again! [END SPOILER]

That pseudonym of Craig’s, “Jay Taycee” didn’t fool me, but in 1966 I didn’t think of the reason behind it. Craig’s day job was in an advertising agency. Coming back to the comic book industry, and then not wanting to put his real name on his work, showed there was still a stigma attached to being a comic book artist.

The copy of Unknown Worlds #47 which I found online, is missing pages 4 and 5. I found a copy of a blackline Australian reprint from 1970, Tales of Torment #1, to fill in the missing pages.

*If you don’t know who Tugboat Annie is, look here. 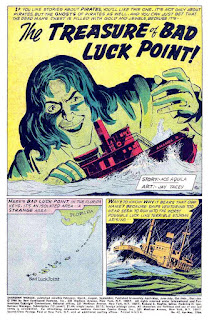 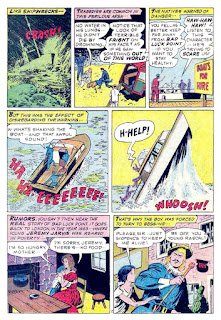 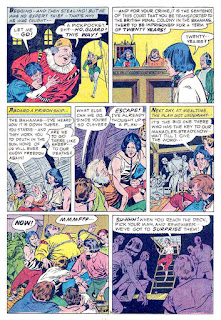 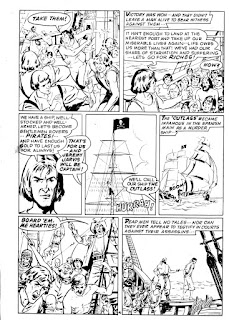 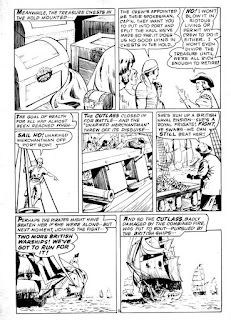 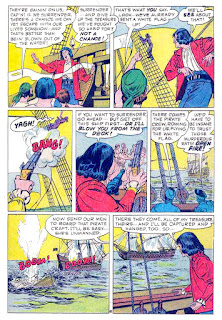 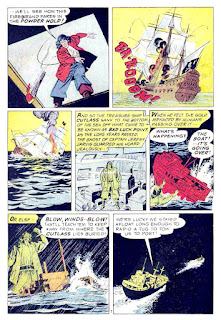 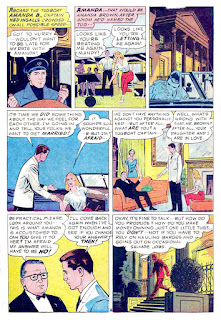 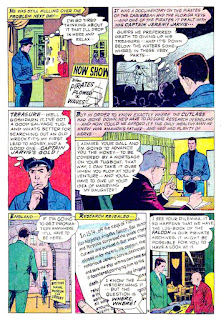 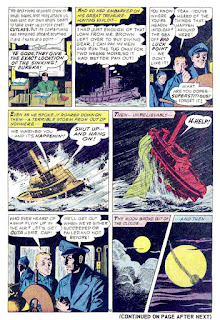 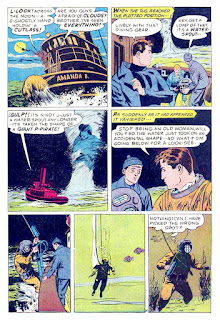 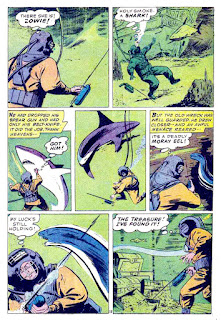 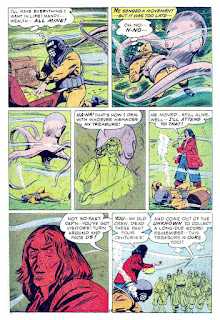 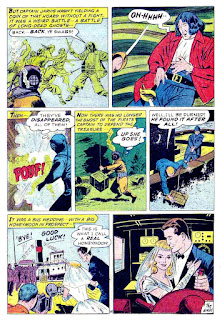 Uh, yeah… No one else thought to look at the old records, the pirate crew appeared just in time, and then for some reason they just vanished.

For what it's worth, my parents used to be scuba divers, and my mother was bitten on the hand by a moray, which probably mistook her diving glove for a small cephalopod. But, unlike the underseas attacks in so many comic-book stories, this attack wasn't part of a series involving a shark, an octopus, a giant clam, Baron Barracuda, and a Nazi submarine. So my mother survived, albeit with some lasting nerve damage.

(Were I writing a story for you, Pappy, then the series would include a gorilla in a diving suit, perhaps as an assailant, perhaps as a rescuer.)

I had a roommate who fell for a woman of a different religion. Her parents announced that she would be denied a fund that had been set aside for her, if she married my roommate. They parted ways. If a woman overtly rejected me for financial reasons, then I might seek to get rich in response, but I surely wouldn't want to marry her afterwards.

When I was in graduate school, I told one of my classmates that he would become rich, and that the tragedy of his life would be that he would thereafter wonder whether any woman who were interested in him would have been interested were he not rich. At the time, he was not rich, and insisted that he never would be, that he'd just be a professor somewhere; when last I knew, he was a banker of some prominence. I hope that the remainder of my prediction were wrong, but….

Craig did a small run on Iron Man in the late 60s, with his real name. Stan and the editors didn't feel it was a good fit and Craig was ... as always ... too slow and unable to meet deadlines. Kirby really moved the needle on how fast artists should be. I liked his Iron Man work. Wally Wood did some of the all time great work on his short run of Daredevil.

As for this story, eh, it's lesser Craig, it looks like he did it faster (which is weird for Craig) but it still shows Craig's great skill.

Craig did a bit of Warren work under the Jay name.

I have to say, this is by far one of my absolute favorite sites on the internet. Thanks for all the shares of these comics that would be far too costly to track down. I can't even afford most of the Plastic Man reprint tomes that DC put out in hardcover, but it's great that there's access to all of this stuff.

Daniel, maybe some men might wonder whether their wives love them for their money, but many of them might just be more inclined to marry the most beautiful woman whether they were truly "loved" for their looks or personality, or their bank account. That old trophy wife thing we see so often with the rich and powerful is real.

In many cultures parents picked out spouses for their children. Like Tina Turner sang, what's love got to do with it?

Except for Herbie, I never hold out high expectations for stories by Richard E. Hughes.

Brian, the Warren magazines were where I first saw Craig's sixties work. He also had work in a couple of paperback originals. For the most part I ignored his Marvel Comics work. I just didn't think of him as a fit for their style and apparently neither did they. Maybe when he came back to comics he should have gone to Charlton where he would have made less money, but could have written and drawn his own stories.

I believe the atmosphere at EC Comics during their prime years was competitive. Craig admired Jack Davis, for instance, and I think it was a case where the artists were trying to do their best to fit in with their peers.

Josh, thanks for your note. I am also very happy that so much of the history of comics is available on the Internet, and without it there would be no Pappy's! I could never afford the actual comics that are available online, and am very appreciative of those who take the time (and chance of causing damage to precious collectables) to scan their comic books.

I have mixed feelings about those archive editions that DC put out. I love the Plastic Man volumes (which I scrimped and saved to own) that you mention, but many of the series I looked at and because of their cost I made a choice not to try to own them all.