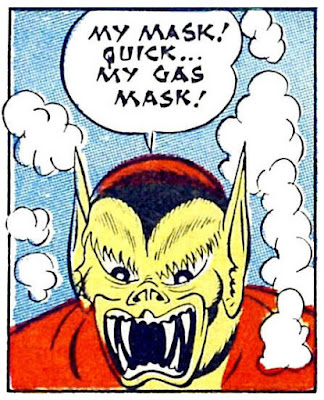 By request, the follow-up to the Claw story I presented last month in Pappy’s Number 2204. The Claw continues his rampage in America, and we find out something about the monstrously large villain (as in the preceding story, misspelled “villian”): his huge lungs need 50 times the amount of oxygen that us regular-size people need. Maybe that is how he keeps going, by sucking all the air out of the room.

The story is from Daredevil Comics #3 (1941), published by Lev Gleason, and edited by Charles Biro, who kept his own readers breathless from all of the action and activity of these early comic books. The story is signed by Bob Wood, who became his co-editor on titles like Boy Comics and Crime Does Not Pay. 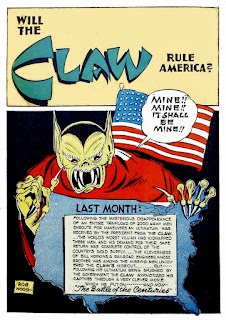 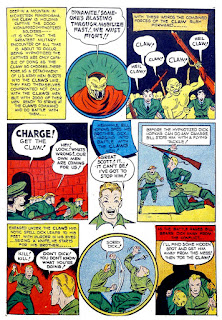 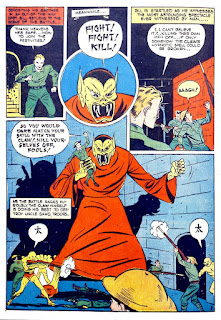 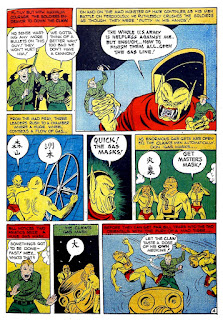 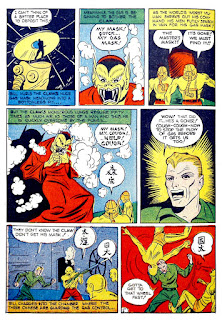 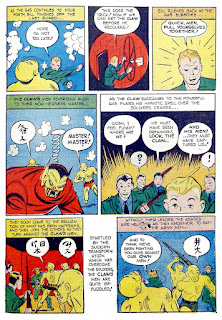 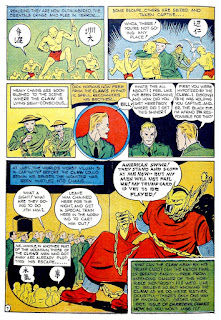 Not a bad second part! Some good action, and relatively clever defeat, and somehow somebody had giant manacles laying around!

I wonder if the Chinese symbols are just artist imagination, or really picked up from a source.

I love the CLAW stories. The idea of an Asian villain who can grow as big as Godzilla is one of the charmingly crazy notions of the Golden Age.

Brian, I have wondered about the writing, also. Since I do not speak or write the language I just don't know, but maybe someone out there reading this can tell us.

Charlie Horse: Daredevil fought the Claw first of all in Silver Streak #7. This is from Don Marksteins' Toonopedia: "Daredevil had been a minor hero from Silver Streak's back pages. Cole revamped him and pitted him against The Claw, in a five-issue story that wound up making stars of them both. Six months later, when Daredevil took on Hitler himself, The Claw was there as well (as were Dickie Dean, Lance Hale, The Pirate Prince and other Lev Gleason heroes, making it the closest the publisher ever came to its own version of The Justice Society of America)."

Claw had a variety of nemeses; my favorite had to be The Ghost, the pilot of a super-plane who wore a hilarious mask and costume for no discernible reason. He just kind of disappeared when a two-part story never finished up.