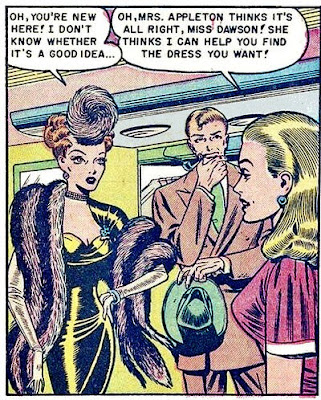 As a child Frances Wells traveled around with her dad to foreign lands and also around America. Daddy was a card sharp and confidence man, and so he’d get caught, leave Frances with a relative, or even in boarding school while he does time in prison. You would think young Fran would have had daddy issues with a father like that. And apparently she does: as an adult she still loves the old crook!

Before you get to thinking, as I did, that they had some sort of unhealthy relationship, Fran becomes interested in Cary, the biggest catch in town. Of course, being a love comic, there has to be conflict, and besides Dad being in the background, the conflict is with Doris, who also has her eye on Cary. Cary’s family hire a private detective to check up on Fran’s old man. Do two negatives make a positive? Cary’s family has its own problems, which cancel out the problems with Mr Wells. It is a lot to take in, especially for a love comic with a limited number of pages to get to the nitty-gritty. It appeared in Quality’s Love Scandals #1 (1950), a provocative title for a love comic. Despite the purity of Frances, there is an undercurrent of criminality running throughout the story. Of course, it is conquered in the quest for true love. Sigh. If only true life could be so easy!

Grand Comics Database doesn’t give any credits for writing or artwork, but my eyeballs tell me Bill Ward had something to do with it. Those females are Ward’s, either in the penciling or inking stage. The image of Doris, from the teaser panel on top of this page, is pure Ward. 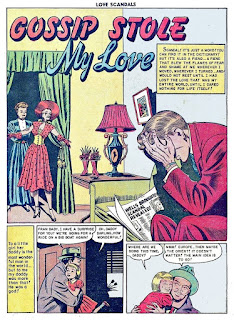 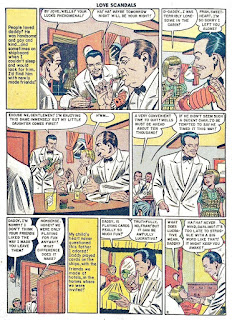 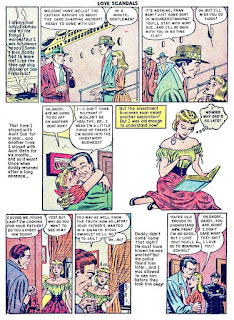 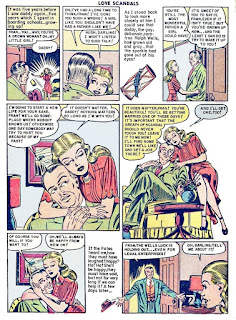 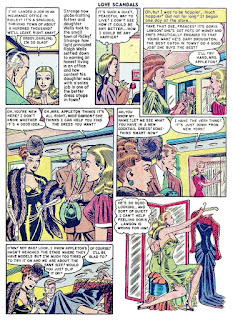 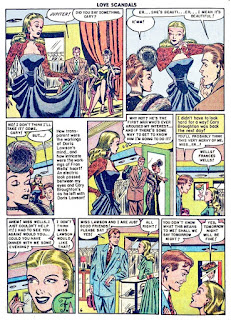 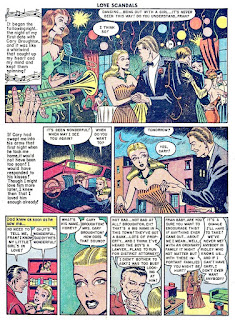 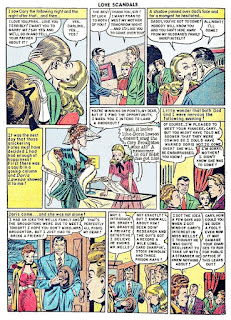 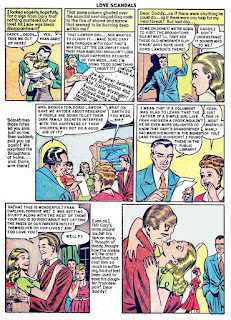 Bwhahahahahahaha! Of course it would not occur to a spiteful Miss Lawson to scorch all the earth around her by revealing the Broughton family skeletons!

I was once asked by a friend to help get his computer working again. In the process, I encountered some kinky illustrations. I didn't want to embarrass my friend, and I recognized the style, so I just said “Oh, Ward.” and kept moving.

I'm going to second you on the Ward thing ... pages 4 & 5 specifically have some panels that have a real Ward feel to them, though the shoe fetish seems to be toned down!

Brian, that would nail down Ward's identity for sure, should he have drawn 5" spike heeled shoes on a girl who can keep perfect balance and even run while wearing them.

Daniel, I'm sure I first encountered Bill Ward's art in those little 25¢ cartoon/joke/pinup digest magazines that the publisher of Marvel Comics put out. There was a huge magazine store with the comic books on full display in the back of the store, so a kid like me, age 12, could stand there looking at comic books, and also at those humor rags which were stacked right next to the comics.

I still believe, and not just because of the stirrings of youthful horniness, that Ward was the best artist for that type of drawing I have seen, and over the years I've seen a bunch of 'em.