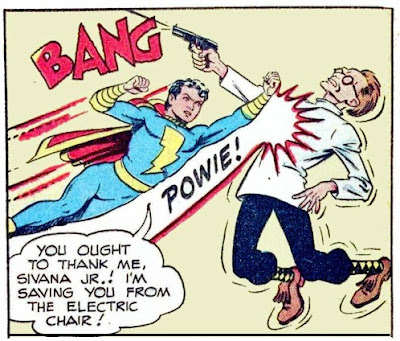 Maybe he just likes to talk about himself in the third person.

The story, from Master Comics #98 (1948) is well illustrated by Kurt Schaffenberger, and written by Bill Woolfolk.

*And by the way, what does Captain Marvel Jr do with Freddy’s crutch when he transforms? 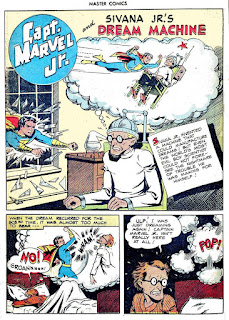 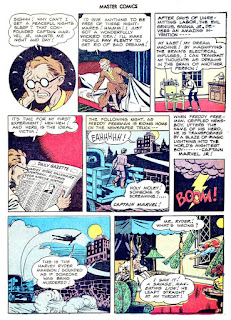 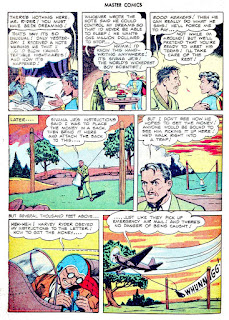 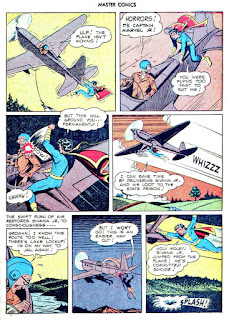 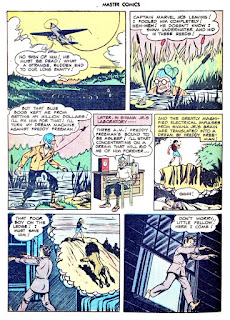 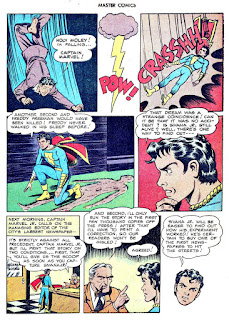 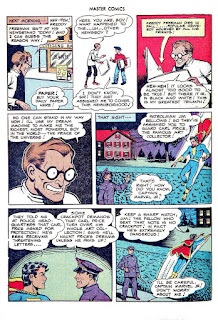 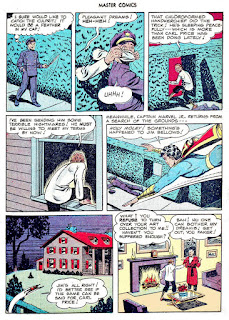 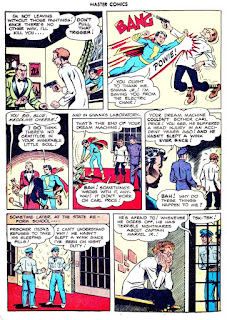 Clark Kent simply is Superman and Matt Murdoch simply is Daredevil. But Rick Jones wasn't Mar-Vell. Some characters seem to be hosts to other characters, as with Bruce Gordon and Eclipso. Bruce Banner may have been a host to the Hulk, or perhaps Banner was the Hulk, one person suffering from dissociative identity disorder (as part of a condition with other symptoms).

Originally, the Spectre simply was Jim Corrigan (a dead man); but it wasn't clear why this one person should ever again present himself as Corrigan. (After his death, he ditched his fiancée.) In this context, the stories began to treat the Spectre as a person distinct from Corrigan. I think that the writers, perhaps by choice, set aside the principle that Corrigan were the Spectre in order to hold onto Corrigan continuing to present himself sometimes as Corrigan. Later, in the context of that separation, when they wanted to discard Corrigan, they had to send him away. (They couldn't very well kill him off; someone might have been caused to remember that he were already dead.)

I think that, in the beginning, Fawcett's Captain Marvel was supposed to be the same person as Billy Batson. But, if he really was Billy Batson, then there wasn't a good reason of internal logic for him to return to the form of a child. He returned to the form of a child for reasons of external logic; the writers wanted the readers (still children) to imagine themselves as able to become Captain Marvel. So, as with the Spectre, the writers lost sight of the identity of the character (albeït less overtly than with the Spectre), and Captain Marvel became a person distinct from Billy Batson.

Most of the time, Freddy seems simply to be Jr, and Mary Bromfield seems simply to be Mary Marvel. But there's an even greater problem with the internal logic, because their appearances don't change, giving them even less reason to become other than Marvels; if there's a good reason for them to look as once they did, then they should just do as did Kal-El and change clothing and accessories. Perhaps that very tension is why, in this story, the character of Freddy seems to pulling apart from that of Jr; or perhaps the writer were just thoughtlessly following the pattern of Captain Marvel (Sr).

In hindsight, we can see that perhaps the Marvels should have faced constraints as with Leonard Brown and the Thunderbelt.

That said, modern comics certainly show their super-heroes as geniuses, too, so I guess it evens out.

Was there ever a world famous newspaper boy?

And Jr. can punch a tank into scrap metal, should he really be slugging children like Silva Jr?

Other questions: why is Cap Jr drawn in a realistic style? Why does he even have a secret identity? Why don’t he and Mary M. become adults?

The powers being magic-based, I think Freddy's crutch (and leg brace - Mac Raboy always drew it so you could see the metal bars on either side of his shoe running to the heel, and he may wear one still in the New 52 and movie trailer but it'd be the molded plastic kind that would slip inside a normal shoe and only be visible if he's wearing shorts) simply...disappear, and rematerialize when and where they were needed again).

Waaaait, Freddy needs a crutch just to STAND. How does he walk to the window? Is his injury psychosomatic?

Sure, TODAY Captain Mar--I mean, Shazam (ugh) is just Billy made big, but back then the Big Red Cheese was a distinctly different character than Billy. In one story, Cap was being seduced into marriage by a witch and Billy was revolted by Cap's gullibility; in another--and in one of those cases where a character sports a power that is never seen again--Billy whispers the magic word to bring Cap into a simultaneous-yet-invisible co-existence with him...to help him cheat on a test! (It was for a good cause.)

Guys, I think I were Billy or Freddy (or even Mary) I would have chosen to live as a super-powered individual, just from the amount of conks on the head they took in the stories. I imagine Billy Batson in later life with dementia from concussions, not remembering to say "Shazam!" and turn back into his super-self.

As for Freddy, in those days many kids were afflicted with polio and would have yearned for the power to step out of their disabled bodies and become powerful people with full mobility. A perfect fantasy for them, and they might have wondered the same thing: why would they want to change back? The crutch and the leg brace must have looked much different to children of the 1940s than it did to my generation, those of us who were vaccinated and able to ward off that much-dreaded infectious disease.

Something else I noticed - what's with hauling newspapers around in open trucks? I understand print media was bigger business then so it wasn't the matter of delivery people using their personal cars as it is now, but surely something that size would've been a box truck?

Go to "I don't care what you think there will be a black superman",on YouTube.

Update - In the 2019 movie, *the first time* Freddy transforms his crutch falls dramatically to the ground. That's also the only time in the finished movie, but there's a cut scene, that takes place later in the show's internal timeline, where it disappears like usual. So, apparently it's a learned skill.