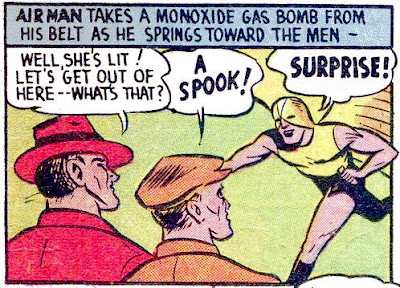 Despite how many comics with many characters I have read in my time, I have still missed a lot of them. That includes Air Man. created by the team of George Kapitan and Harry Sahle. Like Hawkman, Air Man has wings and can fly, but with the help of helium. Like other non-super heroes with gimmicks, he can land a punch, too, which is handy when taking on a whole gang of killers, as he does here.

Air Man was short-lived, appearing in only two issues of Centaur’s Keen Detective Funnies and two of Detective Eye. Centaur was also short-lived, being the first comic book company to go out of business. Sadly enough, Harry Sahle was short-lived. He went on during the 1940s to do a lot of features, including what was a knack for teenage humor. He drew Candy for Quality Comics, and even Archie for MLJ/Archie Comics, then died in 1954 at age 41. Sahle was a journeyman comic book guy, drawing all sorts of comics, including superheroes for MLJ after Centaur went bust. 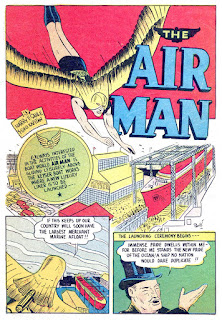 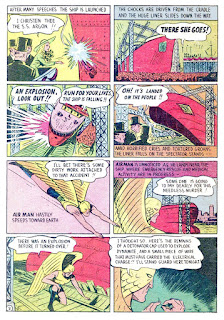 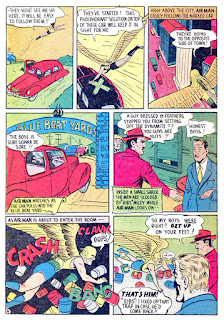 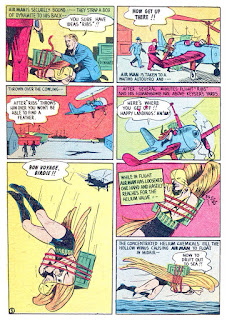 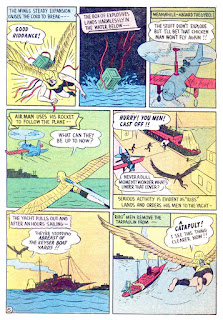 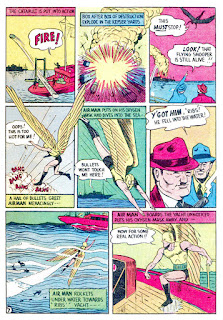 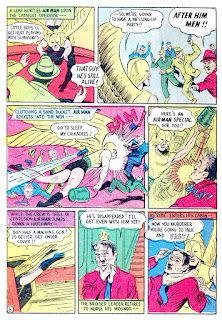 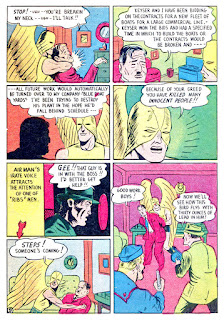 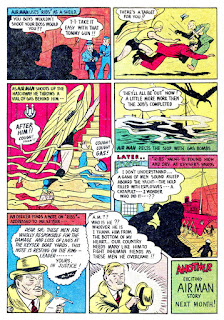 How many times did I yell "SHOOT HIM!" at this comic! These bad guys deserve to be in jail until they die, then resurrected, and put in jail again!

Welllll… There's a great deal of not doing things. Only the Air Man actually investigates the explosion as such. The bad guys don't simply shoot the Air Man when they first encounter him, nor when they next capture him, nor when he boards the yacht. The Air Man doesn't use his gas bombs to stop the use of the catapult.

Many early comic book stories seem, in one of two ways, to be childhood writ large. In some, the conflict seems fairly genuine, but it is very much like that which occurs amongst children — the villains are simply neighborhood bullies. In others, as here, the story is like something that would result from the ad hoc play of children, in which some pretend to be heroes and others pretend to be villains; the stories are games of super-cops-and-robbers, or of super-cops-and-super-robbers.

Daniel, interesting observation. I don't know if your idea was on the minds of anyone writing these comics or if they just were bashing them out without thinking the action through, then collecting whatever page rate they were paid.

I don't think the people publishing these comics had much respect for their readers, which they were aiming at very young people.

This story does seem more like the playtime scenarios my friends and I, ages 6 or 7, would make up after watching Superman on TV.

Bloodthirsty Brian: Yeah, shoot everybody! Then the comics would only be a page long!