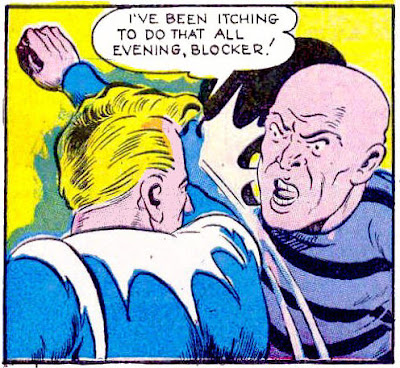 A few days ago we had another story of a costumed hero who had no secret identity...or at least none revealed. That holds true for Dr Frost, also, who can shoot ice out of his fingertips due to his “freezing powers.” People know where he lives, also. While Dr Frost is attempting to sit down, relax and read the newspaper to rest those freezing powers, a lady shows up at his door. She is begging him to help her son who is wanted for murder. You’d think he’d do like some people do, hide in the basement or refuse to answer the door, but no; he is a helpful, albeit really, really cold guy.

Maurice Gutwirth signed the story in the upper right corner. Grand Comics Database credits Ben Thompson with pencils and inks. Thompson may have had something to do with it, but Gutwirth is the primary artist. Gutwirth often drew elongated chins, and several panels have characters with the Gutwirth jawline in them. Gutwirth has also been confused with another elongated chin comic artist, Paul Gattuso, and I plead guilty of that, myself. 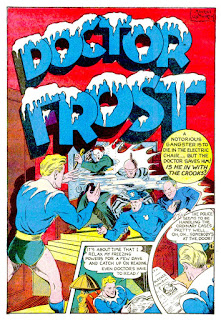 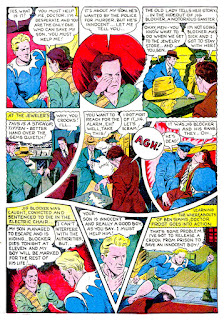 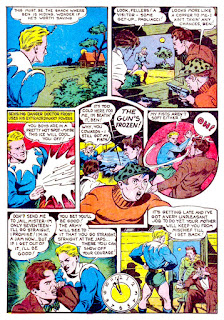 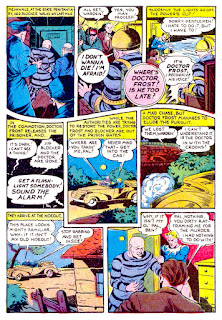 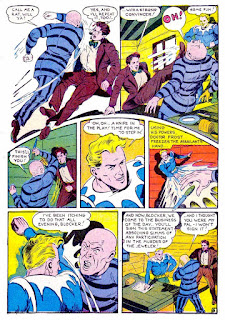 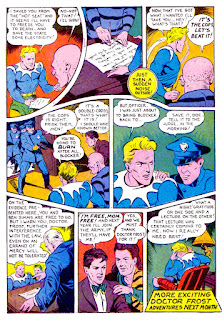 Dr. Frost is kind of a jerk! There had to be 20 easier ways to go about this! And that confession was under duress, it's not going to hold up in court!

BTW, I like how the kid is going to be set straight by sending him to the Pacific theater, the place of gruesome relentless island by island battle against a powerful enemy that would fight to their very last breath. Setting him straight would be an understatement!