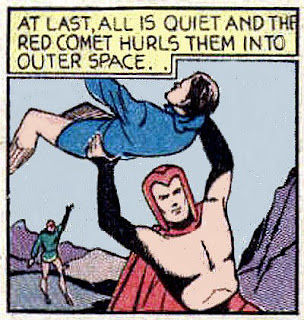 The Red Comet is a character from early issues of Planet Comics. He has “magical abilities,” which, to me, is any power the writer can think up for a particular story to combat villains. As stated in the Public Domain Superheroes website: “His powers include telekinesis, super-strength, extrasensory crime detection, the ability to shrink to the size of an insect or grow to over 5 miles tall (using an intra-atomic space adjuster), and the ability to make things explode with his mind. He flew a ship that could travel over 660 million miles per hour. ”

I would like to learn the trick of making things explode with my mind. It sounds like a handy super power.

Fortunately for criminals, in this entry from Planet Comics #5 (1940), he doesn't use that super power. But Red Comet is able to stop crime for two weeks. He has rounded up all the criminals, and is depositing them one-by-one to “inhabitable planets.” Then he takes some war profiteers and flings them into space. While the artwork is credited to Don Rico by the Grand Comics Database, the story has the fingerprints of Fletcher Hanks, or someone using Hanks's techniques for getting rid of bad guys. Hurling them into space is a real dire punishment, and next to it making the war profiteers explode through the power of his mind might have been considered merciful. 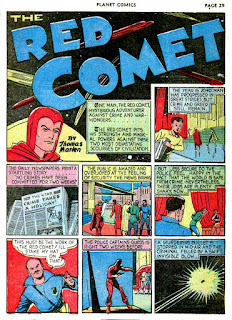 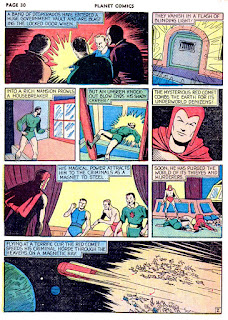 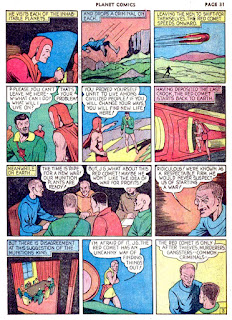 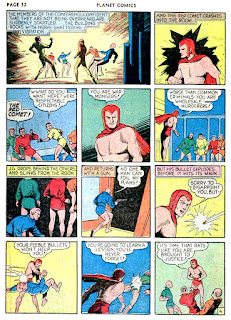 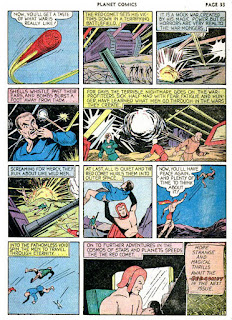 One thing I notice about these futuristic or interplanetary tales is that the men don't wear pants. This was especially so in the Adam Strange adventures where Alanna's father was shown wearing a short tunic and noting else. Is there some sort of subtext here?

I like a lot of speculative fiction that questions our everyday metaphysics. And, while I'm not much of a fan of science fantasy that tosses-in something such as the Force of Star Wars, I'm okay with it until someone sermonizes.

But if one is going simply to have a character or characters who have what amount to fairy-tale abilities, then there seems little point in having elements of science fiction in the story.

With the stories of ostensible science fiction by Fletcher Hanks, one is distracted from that absurd combination by various other deviancies. You rightly note to how this story has other resemblances to a tale by Hanks, but it's just not the full Hanks treatment. It's a childish power fantasy, whereas Hanks seemed to move between contemptuous indifference and rage as he assembled his stories. For example, the villains here are banal and imagine themselves as conforming to accepted convention, whereas Hanks would have made them creatures driven by hate, treating homicide as in itself a source of pleasure, and looking like trolls.

Daniel, good observation. It looks more inspired by than written by, but having someone actually try to emulate Hanks when he was still current would have been cool in itself. (I believe Hanks was trying to emulate Wolverton's art style, but that's just my opinion.)

EG-Markus, you are correct; not only no pants, but their shorts look like underwear, or those panties that superheroes put on over the tights. The difference is these guys don't wear the tights. I think the no-pants was a "style" that began in Flash Gordon by Alex Raymond and other artists followed his lead. Or, since you mention subtext, perhaps the artists had fantasies about guys walking around without pants.

Just to follow up on Daniel's comment: Hanks also would've spent quite a bit of time on the horrible, nightmarish and inexplicably bizarre fates of the bad guys. It wasn't enough for Stardust the Super Wizard to chuck a villain into space; he had to reduce the guy to a living head, carry him to the other side of the galaxy and toss him to a headless giant which would then absorb the head into its torso...the bad guy screaming wild-eyed for mercy the entire time.

Red Comet's foes got off easy.