Number 2116: Stormy Foster was a jerk 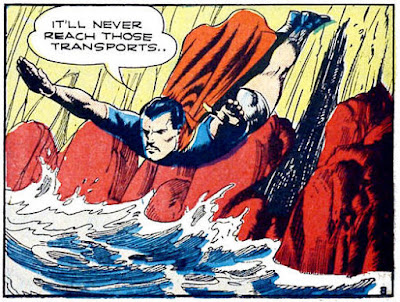 Stormy Foster the Great Defender may have had one of the longest superhero names, but his run was of short duration. He appeared in Quality’s Hit Comics from issues #18-#34 (1942-44). Stormy, in his civilian identity, was a soda jerk in a drug store. For those of you unfamiliar with the term, a soda jerk was a person who prepared ice cream confections for customers of pharmacies, many of which featured that service in days gone past. Long past, I might add. I had experienced them a time or two in my youth, and my youth is as long gone as those soda fountains. Enough said about that.

Stormy found a “supervitamin” which gave him the strength of 10 men for a limited period of time. Some kind of super steroid, perhaps? Stormy should have turned that “vitamin” over to the War Department for the sake of national defense, but he kept it to himself. Even patriotism has its limits, I suppose.

He was also a grown man with another minor child as a sidekick. In this case it was Ah Choo, a Chinese youngster. The Public Domain Superheroes website, from which I am taking this information on Stormy, calls Ah Choo “horribly stereotypical,” yet if compared to Blackhawk’s hideous teammate, Chop Chop, at least Ah Choo looks human. (A note for my readers in non-English speaking countries: “Ah choo” is a sound effect many comics used for a sneeze, so Ah Choo’s name is a lowbrow pun.) And speaking of lowbrow, Stormy’s costume looks incomplete. He forgot to put on his pants. Stormy wears white briefs along with his white socks and slip-on shoes. 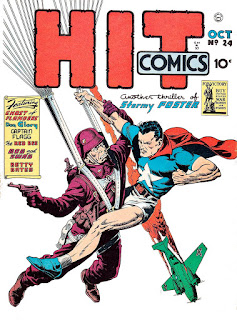 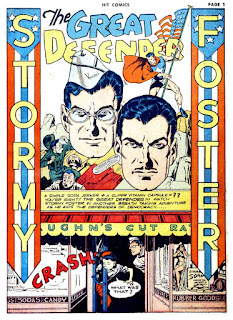 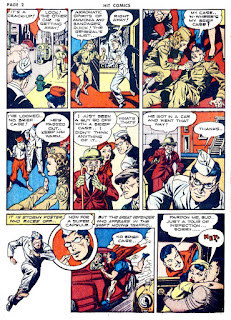 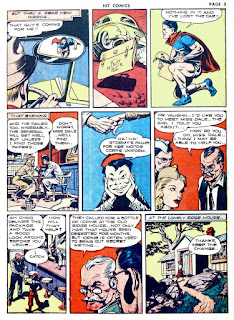 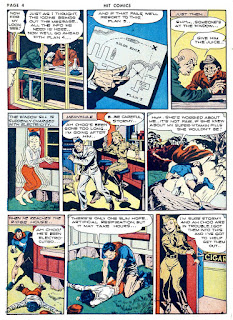 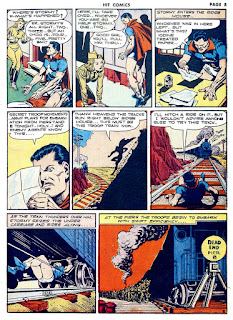 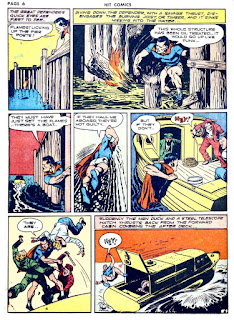 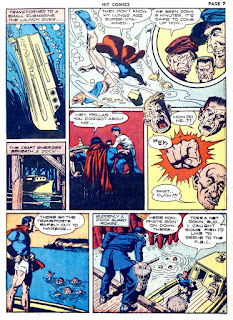 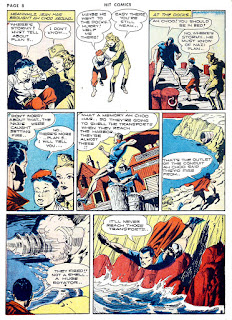 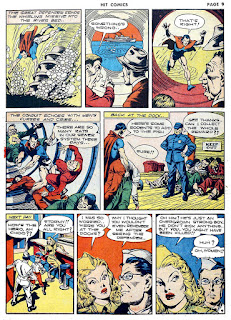 The original person called “the Great Pretender” was a claimant to a kingship, the sense of “pretense” not necessarily entailing falsehood. Now-a-days, though, all but a very few people know only of the song written by Samuel (“Buck”) Ram, manager of the Platters, for whom it was a commercial success in 1955; or of things named or otherwise called in reference to that song.

Another superhero of this era with a super-vitamin was the Blue Bee'le. Super-vitamins always seem absurd to me. But, had Stormy released it to the US, then samples would have found their way to the Axis Powers, causing a general cancelling-out of advantage. (As it was, the German state basically kept its soldiers running on amphetamines!)

I like the idea of Dale caring more about the Stormy persona than about the superhero persona. But she really ought to have noticed that Stormy was just a mustache and a Doll-Man costume away from looking exactly like the GD. And she ought to have wondered how the Draft Board considered that Stormy (who looked and behaved quite able-bodied) were better serving state interest by serving rootbeer floats than by being conscripted.

Pat Morita played a character named Ah Chew on Sanford and Son. Wonder if the idea came from this comic.

Ha! That costume's the best. You are totally right, Pappy. I don't think I would have likened Stormy's shorts to tighty-whities if it weren't for those socks. As it is, I like the idea of a man who changes into a superhero when he takes his pants off, just like the rest of us.

Re: Soda fountains. I guess you aren't southern. I frequented soda fountains at lunch counters in drug and department stores well into my teenage years (in the mid-eighties) around central North Carolina. You could still get the works: Malteds, root beer floats, orangeades, egg creams, phosphates. They made burp water the old fashioned way, with a seltzer can. After the last downtown lunch counters closed, the practice still stuck around in ice cream parlors and greasy spoon diners (I worked in a fancy gelato store in the early nineties); and, as I type, retro soda counters are enjoying a lucrative kind of hip resurgence.

Back when coffee shops were finally opening all over the east coast in the mid-nineties, before the term "barista" was declared universal for this new category of snack worker, we *all* referred to them as "coffee jerks", a term I still prefer to this day.

I haven't seen a lot of Elkin's art, but he never demonstrated that level of skill in manipulating the figure. I'm pretty sure we're looking at Reed Crandall here.

I think Reed Crandall with pencil in hand was hanging around the drawing board when this story was being created.

Russ and Mike. My cop-out is I didn't check Max Elkan's artwork elsewhere, so I can't remember what it looks like. My response should have been that I believe it was probably done by more than one artist, and contributions by Crandall are apparent.

Cavin, I'm sure the last time I visited a soda fountain in a drug store was circa 1963, when I sat in a drugstore with my cousins in their rural town in the middle of Utah.

My memory is of lunch counters in Kress, F.W. Woolworth, etc., which may have served sodas, but I don't remember.

In my teen years my friends and I had our own versions of Pop's Chok'lit Shoppe (from Archie), where we sat for a couple of hours listening to the jukebox and spent about 50¢ each for Coke's and/or ice cream cones. Wow, nowadays it seems so square...yet we thought we were hip and cool.

Here's some background on Elkan, including some Stormy Foster pages signed by him for comparison. It's quite possible Elkan inked Crandall on your example. But notice how different the old drugstore guy looks. According to notes in my old slipcased Weird Fantasy, Elkan was a cousin to Gil Kane. https://www.pulpartists.com/Elkan.html