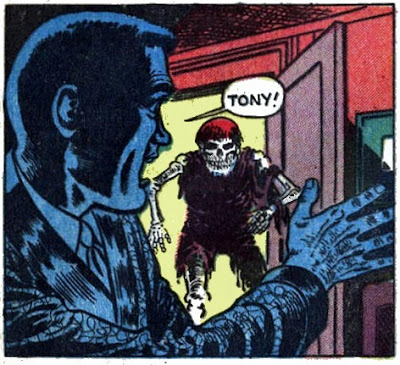 Halloween is next week. I’d better stock up on candy for the trick-or-treaters, and hope this year I don’t eat it all before the kids show up at my door. At least with a Halloween tale or three before Halloween I don’t rot my teeth...just my mind, already long rotted to the consistency of melted nougat.

I have planned horror stories for posts today through Monday, beginning with “Terror of the Burning Corpse.” It is at least well drawn, if totally lacking in a plot with any credibility of all. But that is my assessment. I leave it to you to decide if you can accept a man taking on the looks and persona of a rival to the woman he loves. After killing him, of course. And we all know what happens when someone is murdered in a horror comic...they find a way back from the dead to wreak their own revenge.

Grand Comics Database doesn’t guess who wrote it, but they think Hy Fleishman (with question mark) drew it. It is from Dark Mysteries #18 (1954): 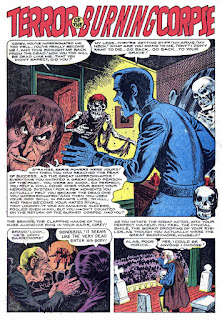 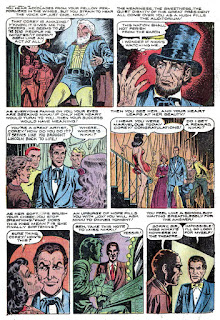 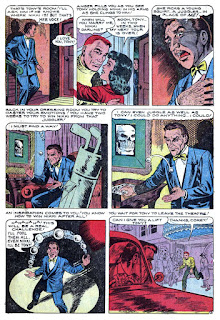 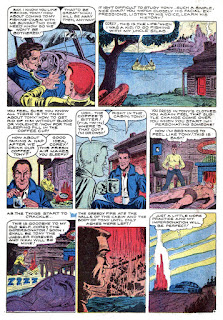 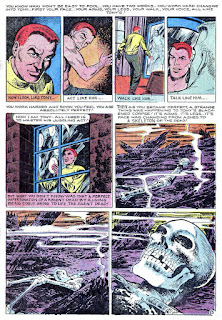 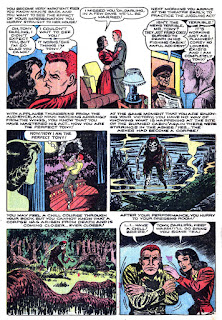 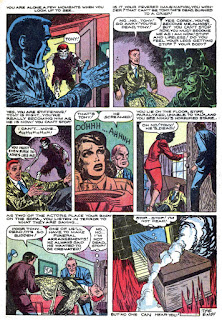 Well, as you recently expressed some apparent concern about a death such as that visited upon Corey, I am forced to conclude that you're not Pappy at all, but some sociopathic impersonator who murdered Pappy in order to steal Mrs Pappy from him. (She must be quite the woman!)

This story seems rather like an attempt to add a twist to Man Overboard, by Marion Crawford. In that story, a twin allows his brother to die, then impersonates him in order to marry a woman who loved the deceased. Obviously, such an impersonation is more plausible than the one in this story.

As you say, there's no credibility to this story. One could object to many things. I'll confine my carping to the first cremation and to its partial reversal.

A fire would have to be astonishingly hot to reduce bone to ash. In ordinary cremation, the soft tissue is reduced to ash, and then the bone is mechanically chopped and pulverized. If bone were simply reduced to ash, the absence of anything that could be identified as remains should have caused authorities to treat Corey as missing but not necessarily dead. And I'm not sure why only some of the ash should be reconstituted, nor why Tony arose with a tattered shirt and pants when he was incinerated wearing nothing but trunks (and perhaps socks) — except of course that a more fully reässembled Tony would just look like a dude from the swim team.

At Hallowe'en, rather than give candy, I give 1:64-scale toy cars. If bought in bunches, they are not more expensive than candy, and kids get more persisting pleasure from them.

I am very upset -- every year you tell us how horrible you are going to be to trick-r-treaters and now we find out that their only danger is you might eat all the candy first? Is Pappy softening up, like Nikki in this story? I'm shocked, I tell you, shocked!

As they say in comics: GASP!

I like the ash turning back into a skeleton, that's actually relatively unique. The story is also slightly unique, which is a high hurdle to climb for horror comics of the period. Still, it's written a bit like a fever dream and strains credibility to it's utter breaking point.

Daniel, I have decided when it is my time to have my mortal remains burned and pulverized.

My brother has chosen the same. I don't care what my survivors do with my remains, but my brother wants his ashes spread on his ex-wife's white couch.

I have known a few sets of identical twins, and for the most part once familiar with them I could tell them apart. There were two guys, when I was in high school, that I invariably called by the wrong names. "I'm not Josh, I'm John," one would say. "No, I'm Josh, not John," the other might say. One night, not too many years ago when awakened in the early morning hours and ruminating, the thought suddenly struck me that what if those guys were messing with my mind? Maybe I was calling them the right names after all, and they were making me the butt of a private joke! I'd go hunt them up and demand to know the answer but I can't remember their last name.

I like the idea of the little cars for kids. No cavities, just dad stepping on it in his bare feet when he gets up in the night to go to the loo. I am speaking from personal experience.

Brian, I thought I'd softened up the past few years in my comments about trick or treat kids.

I buy enough candy for the early ones, the real little kids with mom and dad right behind them. Then Mrs Pappy and I go to dinner, so we miss the teenagers with no costumes and pillow cases full of 50 lbs of candy they have bummed from generous folks.

Not me. If a kid comes to my door and he has a real beard longer than mine he doesn't get anything but a door slammed in his face.