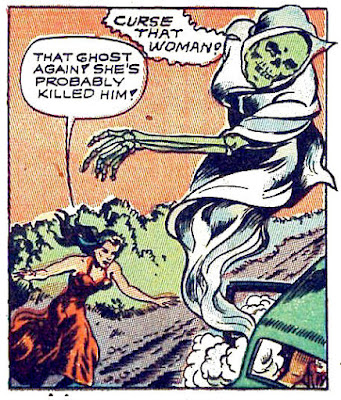 “Grimm, Ghost Spotter” appeared in the four issues of Bomber Comics, from 1944. But this episode is a reprint of a story that appeared a couple of months earlier in Harvey’s War Victory Comics #3 (Winter, 1943). I am not sure how all of this happened, but the contents of Bomber #1 appear to be reprinted from various sources, with the indicia listing the publisher as “Elliott Publishing Co.” I believe it may have been a company formed to print some comic books using a willing third party’s paper ration. To compound confusion, the Grand Comics Database lists the story as it appeared in War Victory as having art by Rudy Palais with a ? after his name, to show they aren’t sure. For Bomber Comics they list the artist as just ?

I am used to seeing comic book stories by Rudy Palais having characters dripping sweat. I don’t see sweat, but I think it may be a comic book sweatshop job with various artists working on it.

I like that Grimm goes to work carrying a ghost disintegrator, which in his line of work would be a handy device to have. But the unknown writer* must not have consulted the Monster Manual. Grimm says the countess is a zombie, but she doesn’t cast a reflection in the mirror. I thought it was vampires who don’t have reflections. Well, neither do I, but that's because I close my eyes when I look into a mirror so I don’t have to see myself. 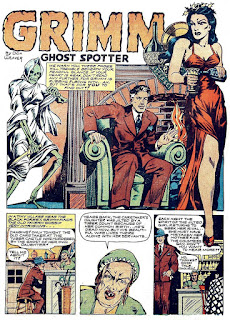 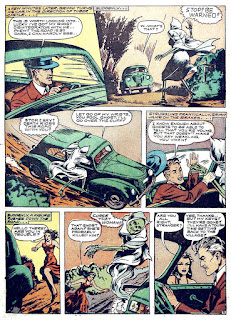 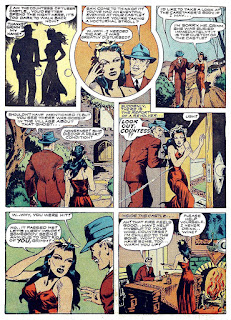 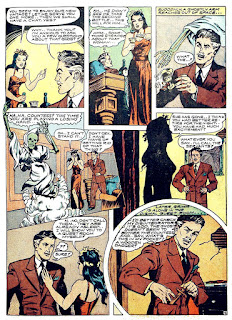 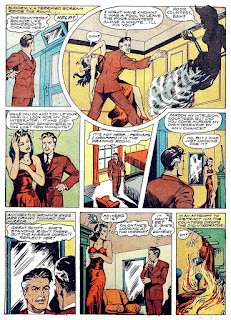 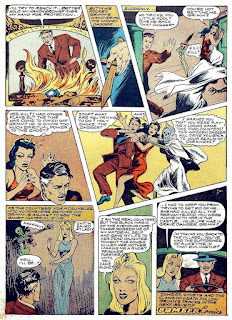 I've a Chinese friend who classifies both disembodied spirits and soulless zombies as “ghosts”. It seems as if the comic books of the '30s and of the '40s used “zombie” similarly to refer to something that was dead yet efficacious.

I'm fascinated with how the notion of the zombie evolved in the 20th Century. Until sometime in the '30s or in the '40s, zombies were living persons brought to a death-like state by drugs, by hypnosis, or by a combination of the two, and then animated but robbed of volition. By sometime in the '40s, they the reanimated corpses, again without volition. In the late '60s, they began to be reanimated, somewhat feeble cadavers with a desire for soft human tissue. But, with time, they have developed speed and strength. And they alternately began to be imagined not as corpses but as people transformed by microbial contagion.

Zombies also began ever more to resemble those amongst the homeless who are impaired by severe schizophrenia or by substance abuse. They have become a metaphor for such people, an expression of an everyday anxiety.

That is one confusing story, but I like the art, it's dynamic and that's one sexy zombie. It's amazing how many times in my life I've seen sexy zombies, I guess it tells you a lot about the human condition with regards to death!

It has that one thing a lot of 40s story have -- and suffer -- from. The uber quick resolution. Stuff happens, then suddenly a lot happens and you get a text dump of information. Another story where the ghost at the beginning could solve everything by just explaining it to our hero, but instead tries to push his car off the road.

I love that the ghost disintegrator turns out to be unused. That's a bit more clever writing then you'd suppose in work like this.

I like the art, but that is some of the worst writing I've ever read. Just right for a 10 year old, though.

Danny, I think even today's 10-year-olds might think it was badly written. Thanks for the note.

Daniel, for some reason those walking dead, flesh-eating creatures are called zombies, and yet when George Romero created that specific creature for his movie, Night of the Living Dead, he referred to them as "ghouls," because they were flesh-eaters (his original title was Night of the Flesh Eaters).

I assume the shambling walk is what reminds people of zombies from the past.

I had experience with a coworker who was so medicated for his mental problems that he had a zombie-like gait and had to be directed to do each task by a person assigned to him. So "zombies" do exist...many are on heavy drugs.