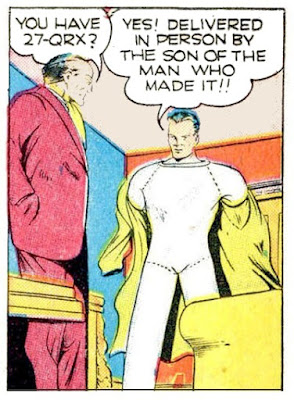 The Human Bomb (Roy Lincoln, a scientist helping his dad develop a super explosive for national defense) debuted in Police Comics #1, in 1941. Roy has another of those superhero origins, where what does not kill him gives him powers. In his case, he can blow things up with his touch. (I think of him as a suicide bomber who doesn’t blow himself up with his targets.) I don't remember ever reading a Human Bomb story before. Probably because his bomb suit is visually uninteresting to me, although the artwork by Paul Gustavson (as Paul Carroll) is dynamic and well drawn. Those early Quality Comics under the aegis of the Eisner and Iger shop were noticeably better drawn, not to mention more colorful* than most of the competition.

Creator Gustavson was born in Finland, and at age five came with his family to the U.S. He did several successful comic book features over the years, but in later life did what a couple of other artists I have mentioned before did. He went to work for the government. In his case as a surveyor and civil engineer for New York State. Gustavson, born in 1916, died in 1977 at age 60.

*Quality publisher, Everett “Busy” Arnold, although color blind, insisted on a lot of color in his comics. Later on they toned down the vibrant hues, but those early Quality Comics had a scorched eyeball effect. 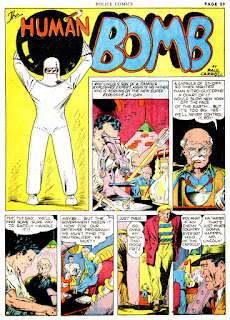 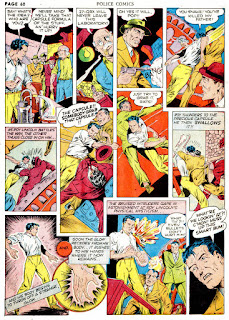 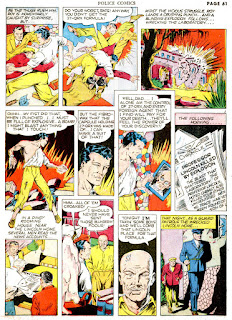 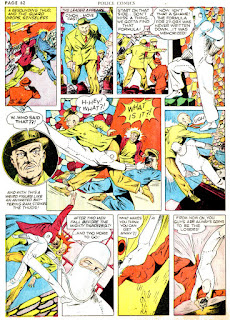 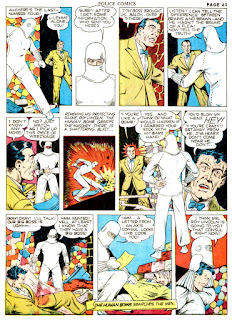 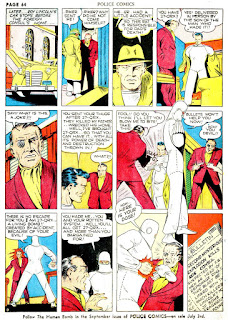 Perhaps I'm a philistine, but I have always liked the coloring of these comic books, when it was applied to work of the sort that was being done by the artists of the Eisner-Iger shop.

But the Human Bomb has always seemed a poor character. He's a one-trick pony in an indeed very boring costume.

None-the-less, I wish that I'd been the one to see how Nietzsche's formula could be applied to the origins of some superheroes!

What, they didn't show the evil spy being blown to bits? That why I read these rags!

As you said, the costume is a really bad idea. It's bulky, you can't show expressions very well, and the pure white is just eye jarring. It's actually an interesting power (and I assume he's bullet proof because the bullets explode when they contact with him, though I don't remember them explaining that.) That said, he doesn't really use it in an interesting way, he only threatens and kills with it. It's a clever power, but no cleverness in the story!

At some point, Roy's explosion-powers were concentrated into his hands, freeing him from the "fibro-wax" suit. He had to wear gloves all the time, slipping them off when he wanted to punch someone/something.

Even the Human Bomb got one of those silly sidekicks that almost all Golden Age heroes had (if they weren't flitting about with a young boy). Pathetic wimp Hustace Throckmorton received an emergency blood transfusion from Roy and subsequently gained identical powers; however, Throckmorton's explosive force generated specifically from his feet. (Hustace was replaced for two issues by the Bombardiers, a trio of young folks with similar powers. It was never explained how they got those powers, nor did we find out why they disappeared.)

The hit manga/anime My Hero Academia features many characters clearly inspired by DC/Marvel superheroes and amazingly the Human Bomb is among them; perpetually-angry Katsuki Bakugo secretes a "nitroglycerin-like substance in his palms" which he can detonate at will with desired force from a series of sparks to a burst powerful enough to level a building. He can even propel himself through the air in this fashion. Apparently he was born tough enough to not be reduced to a deaf, blind, mindless puddle of flesh-soup by his lifelong use (and abuse) of this talent without any protection whatsoever. One wonders why Roy's ears didn't even ring.

IMO the Human Bomb is one of those characters where the author was just blue-skying his ideas, and not really giving much thought as to how the ideas would work in a regular series.

As the series wears on it gets more and more comic in tone. It's never a million laughs, but it has a few loony moments.