Number 2109: Taking a Whiz into the future 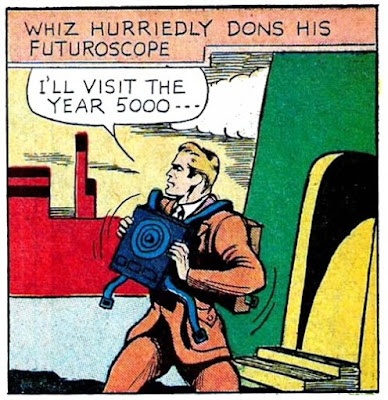 Whiz Wilson doesn’t appear to have a first name other than Whiz. At least the website, Public Domain Superheroes credits him with that name. Whiz lives up to his name by whizzing into the future, which he did in a handful of adventures in early Sure-Fire Comics and Lightning Comics.

I mentioned in a Whiz Wilson posting from 2014 why I would be shy about visiting the future. You can see that by using the link below.

From Lightning Comics Vol. 2 Number 2 (1941). The Grand Comics Database has no guesses for the writer and artist. 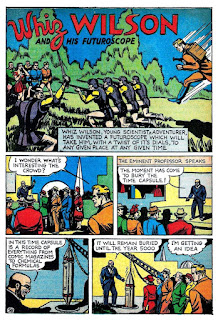 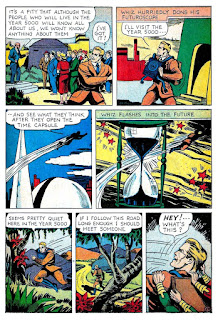 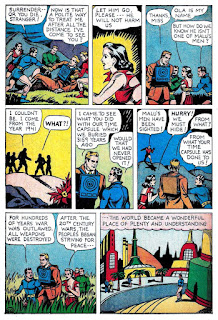 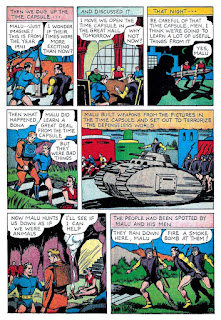 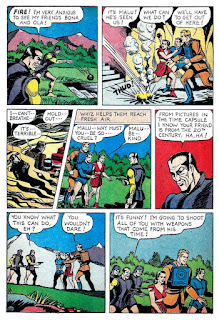 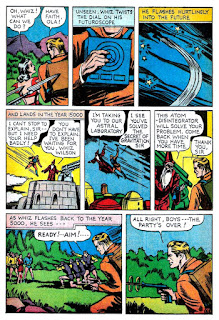 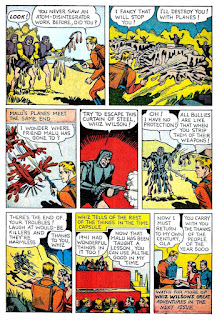 In year 6000 Whiz Wilson has a dictator sign an eternal peace treaty! Just click on the thumbnail. 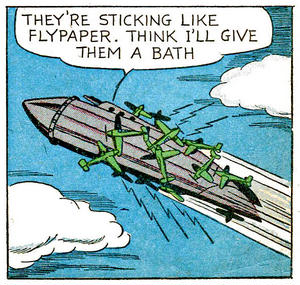 I don't know why so many folk maul “wiz”, from “wizard”, into “whiz”; especially as “wizard” is not pronounced /ˈhwɪzəɹd/.

The reduced size of the people of the futute invites comparison to the Eloi. But there seems to have been no explanation offered here.

I suppose that Wilson went to 15000 because changing 1941 would seem to invite paradox, but 5000 was well in the past by 15000. And atomic disintegrators are even more dire weapons than are those that were known in 1941.

Without paradox and without unleashing new technologies, Wilson could have made successive leaps a few seconds into the future, clobbering opponents at each appearance.

One wonders how not only had knowledge of weaponry been lost but its independent reïnvention had not occurred.

I've a theory about how most people imagine when they will die. As for me, at times I'd be glad to know, as it would simply the associated optimization problem.

Hi Pappy! What a great premise — using a time capsule to learn about weapons from the past! What are the odds that anyone will ever find the 1939 and 1964 worlds fairs time capsules or being able to understand what’s in them?

Daniel, well, I'm afraid I live half in denial of death, and half in shuddering anticipation of the event.

On the other hand, there are business decisions to be made in the event of my death, and I have unwisely put them off. That is the half of me that is in denial.

I also tend to grasp at straws...a thought ran through my head a while ago, "If Keith Richards and Mick Jagger can abuse their bodies and survive as long as they have, surely I will do much better than them!" But they are anomalies. Most people who have lived such a debauched existence die young, so they are no measuring sticks to judge how much time one has left.

But, back to the story. As much as I love time travel I don't believe it is science fiction, but fantasy. That is despite YouTube videos that purport to show time travelers. In fantasy one can do anything.