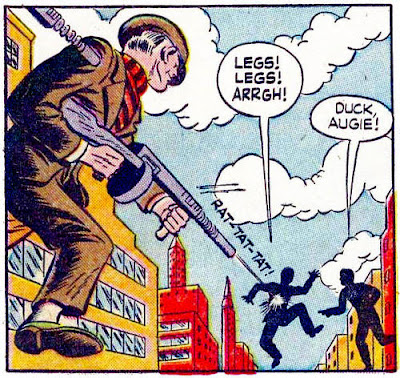 Jack “Legs” Diamond, infamous Prohibition-era gangster, was the target of killers four separate times. In the first three attempts at rubbing him out, Legs got a total of ten bullets in him. He survived each of those attacks. He might have felt invincible. But he ran with a rough crowd, and he did not survive the last attack in 1931, when a couple of goons put two bullets in his head. Goodbye, Legs!

Legs had a girlfriend, Marion “Kiki” Roberts. In this crime comics version of Legs’s life and career, Kiki becomes “Diki.” The editors would do that sometimes when the person they were referring to was still alive. Kiki, who had been a Ziegfeld Follies showgirl, went on the road with her newfound notoriety, after Legs was safely dead. 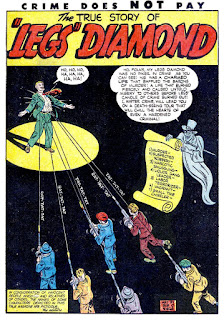 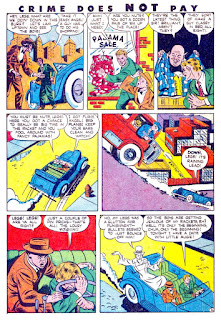 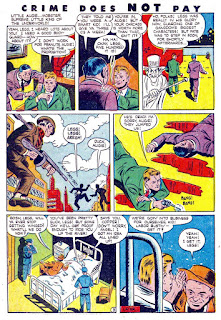 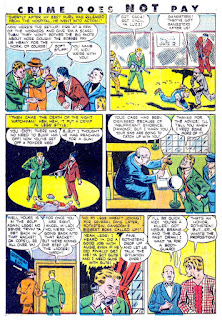 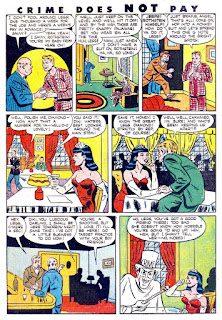 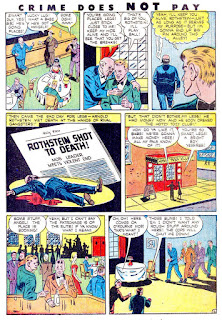 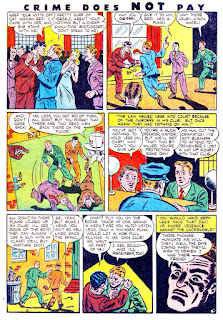 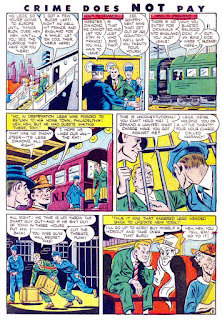 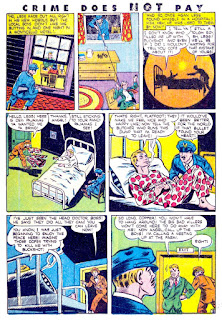 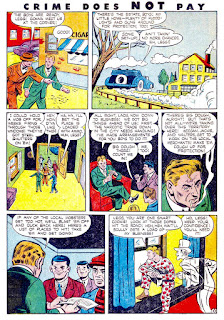 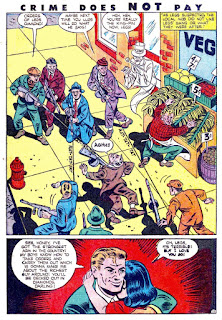 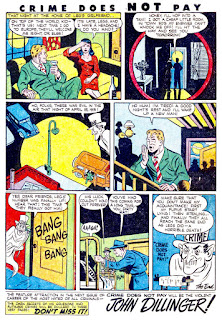 With this issue of Crime Does Not Pay, a 16-page rotogravure section was included with the comic book. It was done in standard detective magazine style, with lurid text articles like “The Riddle of the Bludgeoned Beauty!” and “‘That’s the Killer!’ Shrieked the Parrot!” The section included little fillers called “It’s the Truth” with things every young crime comics reader should know about hanging, the gas chamber, and accidental death by firearms. Also, an informational bit for young murderers: how not to make the mistake of placing a gun in a dead man’s hand, to make it look as if he used it on himself. 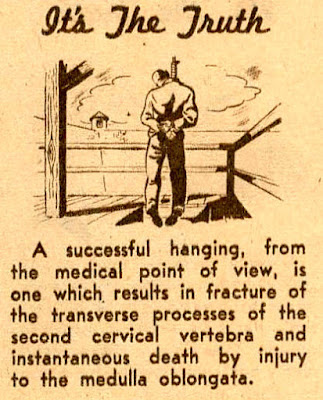 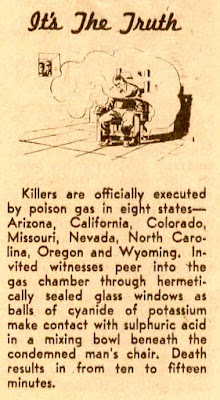 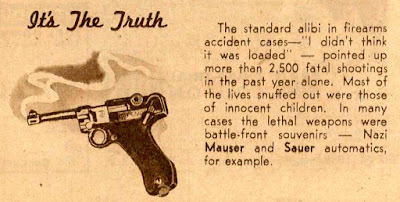 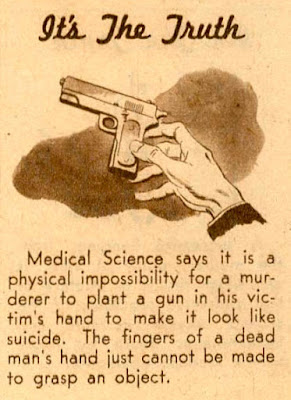 As much as people might like to believe that breaking a neck results in instantaneous death, the actual result is paralysis and unconsciousness. The person hanged still asphyxiates over a matter of minutes.

Forgetting the violence, I wonder if that line about the pajamas angered the anti-comic book people - "They make a guy look classy in bed."

I don't think I've ever mentioned just how great a visual Mister Crime is. Always hanging around, being catty, with that razor-toothed skull like visage. His weird bipolar attitude towards his "students" (he loves them, but can't wait for them to get turned into bloody chunks of meat.) You could make a point about it representing that crime can take you far but is never your friend, but it's really nothing more than a narrative trick.

Unless I missed it, Marion “Kiki” Roberts doesn't have her own wikipedia page, so gangster moll only gets you so far, it seems!

Brian, I don't know who came first, Mr Crime or Mr Coffee Nerves. I used to see the latter in ads for Postum non-caffeinated wheat drink in my Sunday funnies. Mr Coffee Nerves was also a guy who hung around, wraith-like, making comments about what a jerk someone is because they get on caffeine jags from drinking too much coffee.

In Crime Does Not Pay Mr Crime could maybe even root for the bad guy, but knew how criminals wind up. When the inevitable happened Mr Crime could say, "I told you so."

Grant, in that way I agree with Legs, even if I couldn't look classy in bed even if I wore an Armani suit.

Sometimes lines like this just slipped by (as it did to me), and I wonder if anyone caught it. Maybe back in those days pajamas meant a sign of affluence or class for the wearer, with sex meaning a secondary meaning. They sure beat torn underwear for sleeping apparel.

Daniel, I decided long ago that hanging would not be a good way to die for those reasons you mention. Various methods of state-sponsored death were sold as humane, electric chair a good example, right up to lethal injection. I wouldn't choose any of them for myself.

We'd have to understand the brain better than we do to know whether any of the methods in present or recent use cause suffering. Our only way of being assured that a method were humane would be if it caused truly immediate obliteration of the brain. Such a method would be socially unacceptable because people don't want a physical mess. They'd rather risk that the person suffer than have a mess.

The best idea that we've had for you execution has been to crush you with a falling stack of memorabilia while your back is turned and you are distracted by a copy of the little-known collaborative work between Harvey Kutrzman and Matt Baker.

Not a bad way to go, actually, but I think the dust might choke me to death before I succumbed to brain damage by falling objects.

I've had a few surgeries in my time, and I like the way they put me to sleep, where they could cut me open without me feeling anything. That's how I'd like to go: become unconscious and not be aware of anything else that happens to me, including being sent down the conveyor belt to the flames of the crematorium. If I were to wake up in the middle of that ride into the fire I'd surely think I was the punch line in an EC horror comic, and wonder what I did to deserve it.

But did the anæsthesia keep you from feeling pain, or did it instead just prevent formation of memories of the experience?

Daniel, if all the anesthesia did was prevent the memory of pain, then what's the difference? Since I have no memory of pain then for me I was not in pain.

If you die an excruciating death, presumably you will have no memory of that, either.

My point is that we cannot infer that a method of execution is relatively painless simply because it is administered under anæsthesia. We'd really need an instantaneous obliteration of the brain.