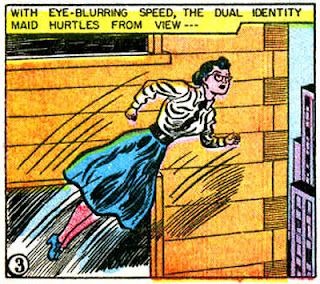 I don’t know if there was a legal arrangement made after Wonder Woman’s creator, William Moulton Marston, died in 1948. H. G. Peter, who was 61 when he began drawing Wonder Woman in 1941, continued as artist until his retirement in 1957 at age 77. (See link below for Peter’s last job as Wonder Woman’s artist, which appeared in 1958.) For some time when Wonder Woman was a big seller Peter had a studio where assistants were employed to help him with the artwork. I don’t know if he was still using assistants when Robert Kanigher took over editing and writing chores.

Peter’s distinctive artwork seemed more quaint as time went on. “The Dream Dooms” was published in Wonder Woman #81 (1956), the same year the Silver Age was born, with the revival of the Flash in Showcase #4, cover dated October, 1956. Kanigher may have been obliged to use Peter for the art chores until Peter chose to quit, but he chose a more contemporary style for the covers. The cover of #81* was drawn by Irv Novick.

Kanigher used two of Marston’s original characters, Paula Von Gunther, and the Duke of Deception, in this story. 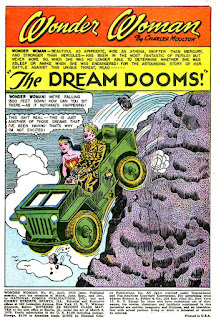 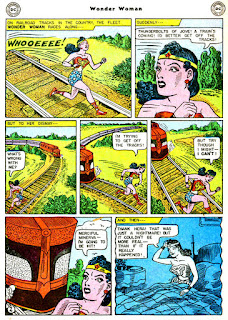 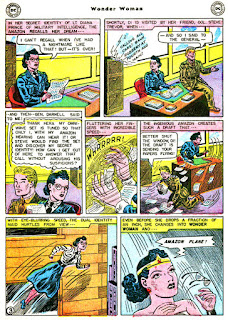 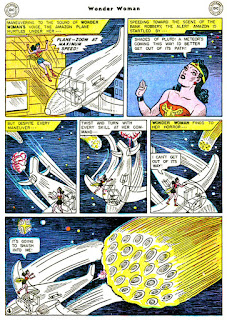 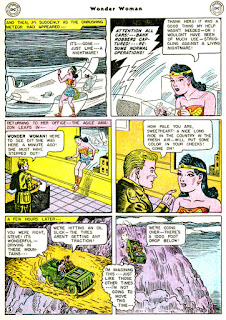 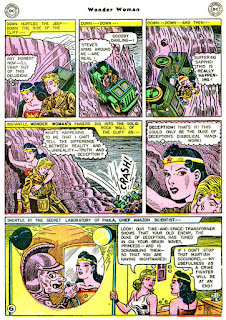 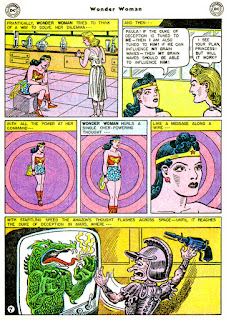 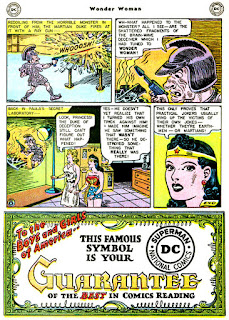 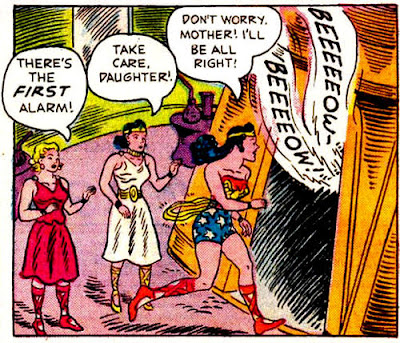 Indeed, Peter's work looked quaint, while much of the other line-up at DC had become more polished. But some of the work on Batman was also quite primitive — albeït not as primitive as was that on Wonder Woman — until the “New Look” of 1964, and the Giant-Size Batman issues were nothing but old look material for some years afterwards.

I'd like to know what the sales figures were. If Wonder Woman was thought to be selling well, then they may have feared to tamper greatly with the formula. Batman's “New Look” was introduced at a time that DC was contemplating perhaps cancelling Batman (I suppose that Detective could have been retasked.)

The story here isn't particularly satisfying. The Duke was given a scare, and tricked into destroying the weapon that he was using against Wonder Woman; but he received no other come-uppence. Steve got clobbered (or did he just faint?), and the taxpayer was on-the-hook for another Jeep. There isn't even a convincing reason that the Duke wouldn't simply build another brain-wave deceiver and use it with more caution or against more vulnerable targets.

Yup, in agreement on Peters. He has a charm that worked well for the early days, but in 56, this art is very dated. The meteors, that cliff face which looks like heavy pores on dead, gray skin probably aren't cutting it!

I can't get enough of the scene where she's sleeping in her full Wonder Woman costume, tiara and all.

The sense of humor and fun in the early WW stories were among my favorite parts; that's something no writer of the subsequent eras managed to capture. In fact, they may not have even tried: Wonder Woman became an overly serious warrior goddess, probably in order to earn her place next to Batman and Superman as DC's Trinity. As a result (I think), sales for her have never been what they were in the Golden Age; while Bats' and Supie's main titles have continued essentially unbroken since their debuts, WW's lone book has been rebooted several times now.

Speaking of Peter's art style (as you did, Pap), I'll agree that it must have been really quaint and out of place by the Silver Age, since it already was when the series started. Peter had always drawn in that creaky (though charming) manner, and I guess Marston didn't see any reason to have him change it (or go with a different artist).

I need to mention WW's secret identity here. I always thought it was a cute bit, naming herself "Prince," since she was a princess. But when I started reading the Golden Age tales, I discovered that she'd borrowed the name from a lookalike woman, also named Diana! Why the convolution? They simplified that on the 70s TV show, having her create the secret identity herself.

Here's another issue: the plane. That damn invisible plane that doesn't make the people inside invisible. What the hell is the point? And why would the Amazons, who never left their island, build a plane, especially an invisible one? While I'm at it, I've got an additional question: why make Paula von Gunther a "good guy"? She was a vile villain, but she was interesting and a worthy nemesis for Diana.

In the end, Diana decided that the Duke's mental influence was just a practical joke?? Boy, she's really forgiving. But, then, she was all about love and peace, wasn't she?

Daniel, well, he was the Duke of DECEPTION after all, so yes, he could have done just what you said.

What turned me off about Batman before they gave the character to Julius Schwartz to revive wasn't the artwork (which I was used to, but not in love with), but the bad science fiction plots.

In those days I got a thrill when I saw a Batman story illustrated by Dick Sprang, an artist far ahead of Sheldon Moldoff, ghosting for Bob Kane. As I later found out, Sheldon Moldoff using his own style was quite a bit better than the stuff he showed with Batman, but that could have been to disguise the fact that Bob Kane was not drawing the stories. (I'm sure that didn't fool the editors, who would have been total idiots not to know.)

I guess Diana wearing her WW costume to bed made her ready to go if duty called, although she seemed to get out of her Diana Prince uniform and into her skimpy Wonder Woman costume easily enough.

Or maybe there was something they left out. Maybe her boyfriend, Steve, would visit in the middle of the night and — heh, heh — he liked her in her WW garb.

Ryan, somewhere in my files is a story on the origin of the invisible plane, so if I can find it I'll show it in time.

(I also wondered if Lynda Carter's beautiful body in such a tiny costume caused problems for the network. As it was, I worked with a bunch of guys who were avid followers of the show, but I believe I was the only one who knew Wonder Woman came from comic books.)

As for Peter's artwork, I have seen his cartoons going back to the twenties, so he was a seasoned pro — at age 60! — when he was hired as Wonder Woman's artist. There was some sort of legal tie of the Marston family to the character, because they sometimes complained about the handling of WW after Kanigher took over. They may have felt strongly about her artist, and demanded that he stay on until he decided to quit. I have read the books about Wonder Woman, but I can't remember if I read something about it or if I'm just supposin', so if someone knows I hope they will tell me.

HG Peter's Wonder Woman is really the only Wonder Woman, I dislike everything Ross Andru or even George Perez did afterward, as talented as those guys were. I agree with the late CC Beck that comics should be comics, not illustrated fiction. Everything after Peter is revisionist remakes of Wonder Woman, it's not "Wonder Woman." It's "Neo-Wonder Woman," it can't be anything more. Same with Neal Adams' Batman, Green Lantern/Green Arrow, "Smallville," "Riverdale," etc. Superman after Joe Schuster is neo-Superman, where they took more ideas from the radio show ("Kryptonite," Jimmy Olsen) than they took from Jerry Seigel.

For better or worse, it is what it is.

I dont want to be near CC Beck's grave on the day the Marvel "Captain Marvel" movie comes out, he's likely to be spinning so hard he'll cause a cave-in or earthquake.

Applying the modern, soulless, anti-art philosophy of corporate comics to the world of ACTUAL comic books that existed back then does not work.

Peter, you have said succinctly what would have taken me several paragraphs (or pages) to say about the original comics being the true versions of the characters. Furthermore, I mostly ignore the superhero movies because I think the people who make them have missed the point of the comic books. I haven't watched all of them, and there are a couple I actually like as movies, but for the most part I find them overbearing, overproduced and over serious. Some of these movies treat the characters with near religious reverence, as if they are biblical. No sense of humor!

As for the "new" Captain Marvel, I would like to levy a curse. Years ago when I saw that Captain Marvel had become a Marvel Comics character I tossed that first issue in the trash and never looked at it again. Now I understand there are even more changes that have been made, so it might be time to get out my old voodoo doll (it has served me well, but I must use it wisely), even if it means resurrecting C.C. Beck to go after the perpetrators and scare the shazam outta them.