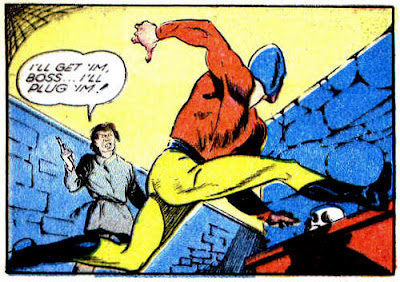 Here we go again: another story of a face-blind parent, who doesn’t recognize his own daughter while she is in her super heroine identity. And she doesn’t wear a mask, just a metal bullet-head helmet. Truly, it is easier to believe someone has super powers than they are unrecognizable to a parent or loved one.

Enough about that. At least the stories in Bulletman #1 (1941) were well drawn by Charles Sultan, a former pulp magazine artist, who went into comics in the late thirties. He continued in comics for years after the war, but eventually became a publisher of men's magazines. As David Saunders notes in his biography of Sultan, he may have been a front man for an organization needing someone with a clean record to go on record as being the publisher of magazines with sexual content.

Whatever. He had art talent. Sultan had excellent training from some top illustrators of the era, and for its time his comic art captures the sophisticated styling of artists such as Lou Fine and Reed Crandall. 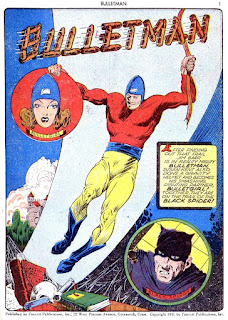 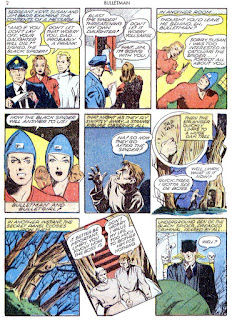 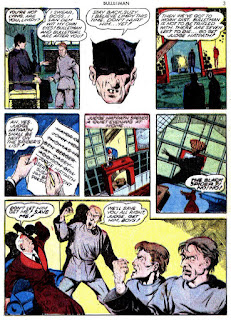 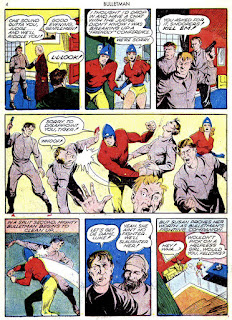 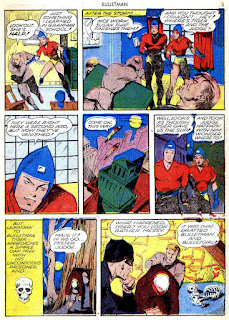 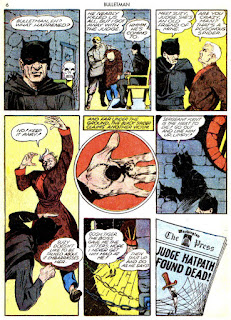 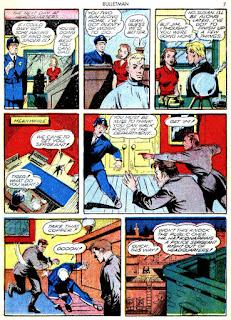 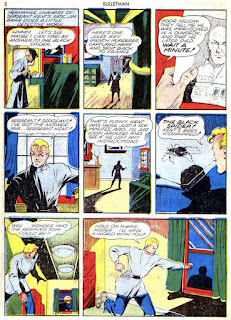 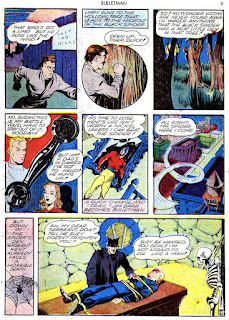 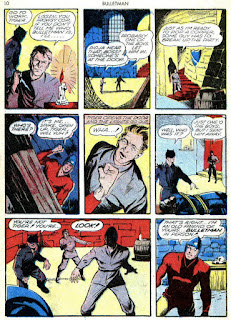 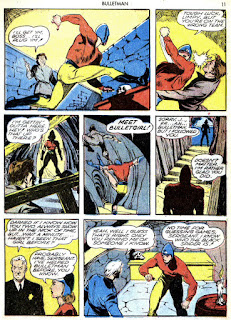 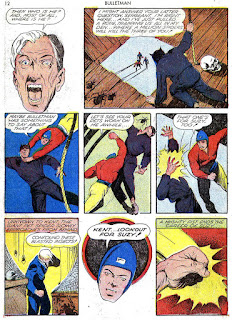 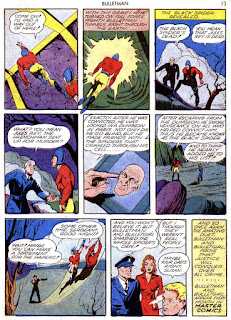 In general, this is one of those stories that are so thrown-together that it seems pointless to engage in a systematic critique. So I'll just note a few things:

• Because of the scaling issues that I have previously noted, larger spiders are far more easily hurt by falls that small spiders. I don't think that Suzy could have lasted very long as Rey's … er … henchspider.

• Bulletman seems to have punched the Black Spider to death!

• It probably would have been easier for the three protagonists to leave the villain's lair by the same route that they had entered.

Daniel, yes, you have mentioned it before, but I have not told you that I find your answer reassuring. My wife would not watch the movie Eight-Legged Freaks because of her fear of spiders, and I assured her that, "My friend Daniel says that spiders can not grow that big because they have an exoskeleton." She thanks you for the relief she gets knowing a garden spider won't get large enough to break down our front door, but she still won't watch the movie. (Based on it not being a great movie, maybe she's better off.)

Eh, Sergeant Kent not recognizing Susan under the helmet doesn't bother me that much. To me, it's strange that the Silver Age Jim Gordon could figure out Batgirl was his daughter but the New 52 one doesn't. (There was a story where he told Batman he could figure out who all of the Bat Family were, but didn't want to, so there's that).
Pappy, I hope your wife doesn't find out about the bird-eating spider. That's plenty big enough to creep me out ...