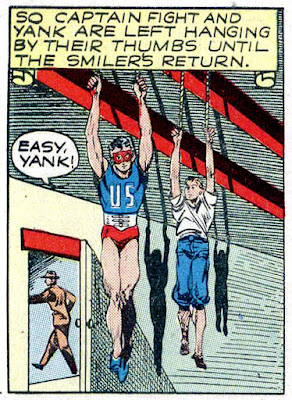 Fiction House, like most comic book publishers of the early forties, had some superheroes. Fight Comics, one of their main titles, featured Super-American, whom we have shown in this blog, and for a short time a second patriotic hero, Captain Fight. The patriotic Captain Fight lasted just four issues (Fight Comics #16-#19). I don’t see a lot of originality in the first story, but the art, credited to Rudy Palais, is action-packed. The artist poured a lot into his work.

Captain Fight was a high school athletic coach, Jeff Crockett, and what’s this? He was recognized by one of his students, Yank Adams, who became his sidekick. We have spoken before of comic book characters who don’t recognize their friends or relations in a flimsy mask (even no mask), and I have questioned if they have face blindness. Yank sees right through Jeff’s mask! Yank is a smart guy. Along with great powers of observation, he even has a ham radio license.

We learn in the story that "Murder is fashionable in Freeville," and not only murder, but torture. The Nazis string both Captain Fight and Yank up by their thumbs. Based on the benign expressions on their faces they must have really strong thumbs. I would be shrieking with pain before passing out, mostly from the knowledge I'd never be able to again hold a soup spoon. Jeff and Yank, though, are heroes, and apparently impervious to torture.

Despite this Captain Fight being short-lived, Fiction House introduced another Captain Fight in issue #44. He was a buccaneer who lasted though issue #69. 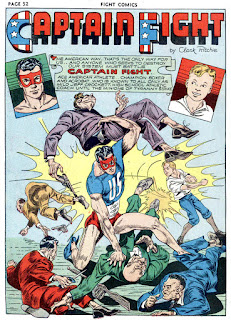 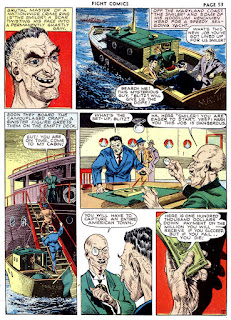 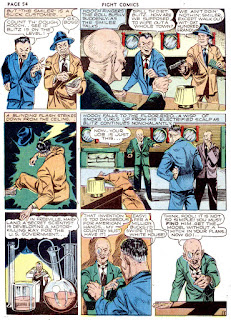 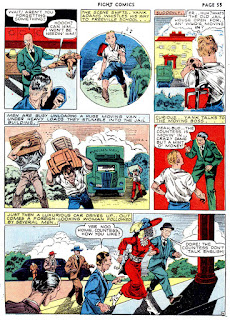 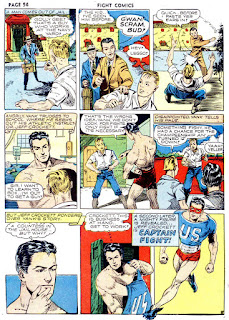 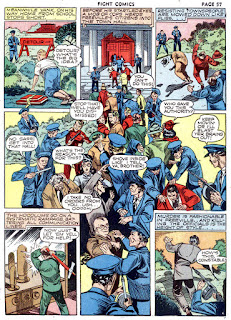 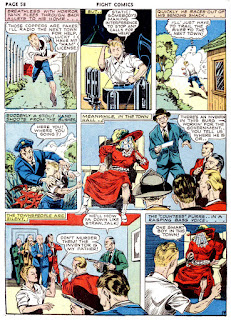 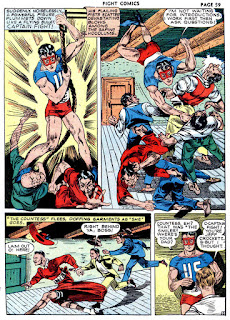 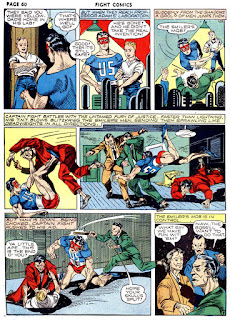 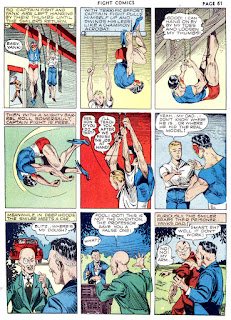 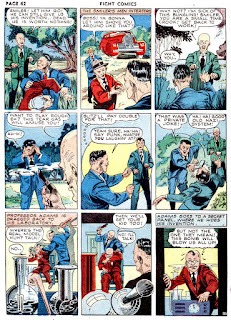 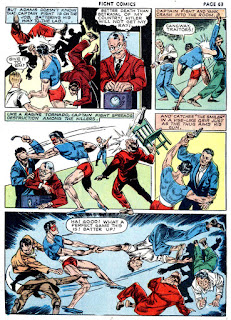 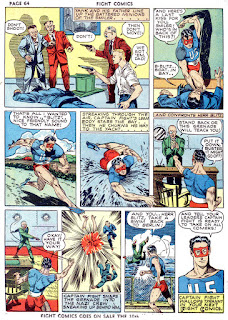 Good luck getting a young sidekick these days. A superfellow would be in court facing charges of reckless endangerment, suspected molestation and multiple counts of breaking child welfare laws as they pertain to the workplace.

That's the kind of defeats that should happen to Nazis ... getting trounced by a guy in THAT costume!

There's a bit of Simon/Kirby in there, all that was around the same year or so (if memory serves me.) Very dynamic, as you say.

Two things I love about this: (1) completely unexplained lightning bolt in the ship. What? (2) a ray -- that can stop engines -- that even the Nazis know about -- isn't being worked on in a secure location.

I'm reminded of Bob & Ray's signoff: "Write if you get work... and hang by your thumbs!"