Number 2017: Hitler with a handlebar 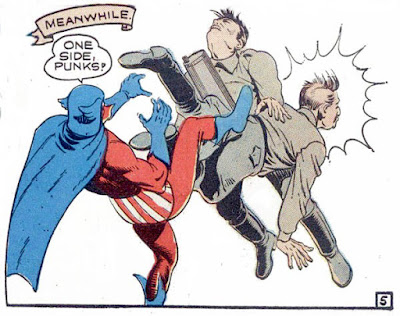 Before America formally declared war against the Axis powers, some comic publishers seemed wary of involving their heroes in direct action against the Nazis. The German-American Bund in the U.S. was pro-Nazi, and obviously didn’t care for their countrymen being caricatured in the comics. In this Super-American tale from Fight Comics #16, the Nazis are so thinly disguised they do not fool anyone, but at least the Bund* couldn’t say they went after Hitler directly. In this story, “Hitler” is a leader called Vultro who combs his hair to the other side, and a handlebar mustache instead of the familiar Charlie Chaplin nose-brush of the real-life Führer.

This episode, the second Super-American story,** is a sock-bam-pow fest from first panel to last. The action is drawn very well by Dan Zolnerowich, with an assist on the inks by Lee J. Ames, according to the Grand Comics Database. 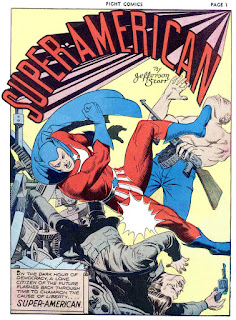 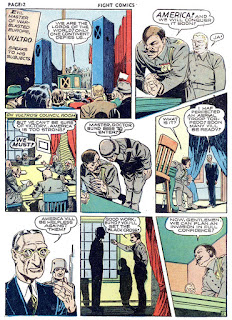 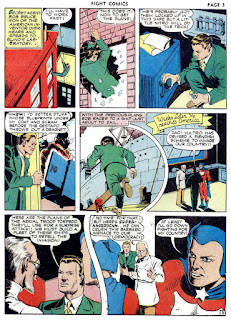 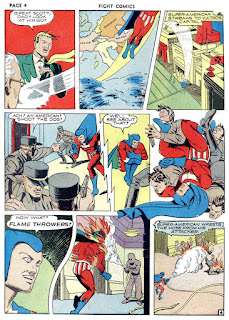 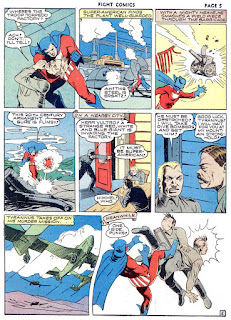 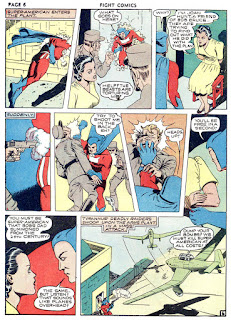 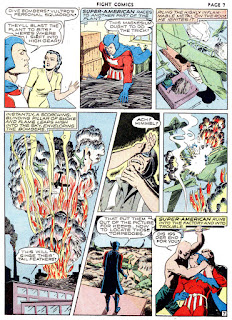 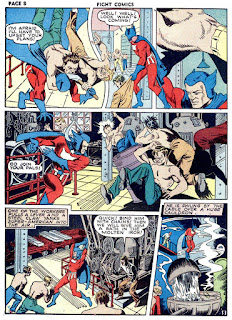 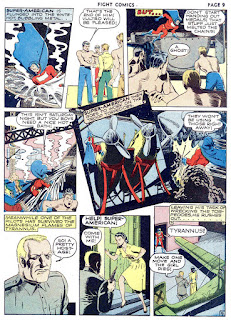 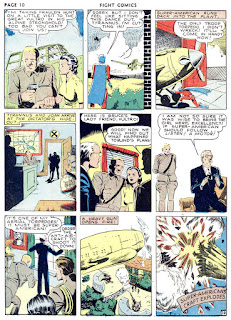 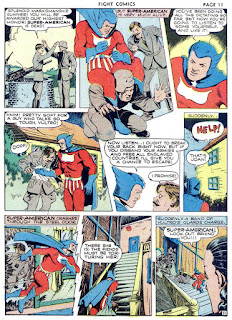 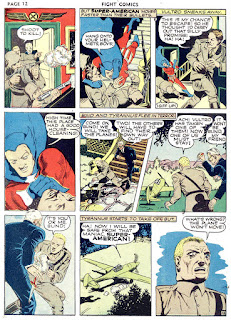 *One of the faux-Hitler henchmen in the story is inexplicably named Bund, a word meaning “alliance.”

There's a great deal of silliness and inconsistency to the story, but what most sticks-out for me is the mysterious chaining of Super-American that somehow takes place between 8:5 and 8:6. It's like an inversion of Jack Armstrong's escape from the pit.

The “aerial troop torpedo” seems to have been imagined as something like a relatively small, propeller-driver troop-transport vehicle. It would perhaps have worked better as a device for executing one's own soldiers than for invading another nation. If they'd instead imagined these things as packed with explosives, then they'd have anticipated the V-1.

For the most part, the art is quite attractive, but the depiction of the faces is comparatively weak — and weaker than in the previous Super-American story. To me, that weakness seems odd, because most illustrators focus on drawing the head more than the body, though I certainly know of exceptions.

Okay, I didn't buy this from Page One. This dude is from the future, which means he knows the "European dictators" (as they're called in S.A.'s origin story) lost the war, or at least they must have since America is still a democracy in the 24th century. So why would he bother going back in time to involve himself in the fight? Isn't messing with history one of those no-no's of time travel? Or did the history of his own time say that the war's outcome would be influenced by one fist-throwing fella in a silly outfit that includes little wings on the cowl?

Regarding S.A.'s powers: He's obviously invulnerable (though there's no explanation why), which takes any suspense out of this story, because he's undefeatable. At no time is he in real danger; all the bad guys can do is slow him down a little, which is more an annoyance than anything else. And why does it sometimes seem like he can fly or at least defy gravity to some extent, but he needs an aircraft for the climax?

Beyond introducing the plot, what's the point of Bob Bruce? He could actually have been the star of his own secret-agent strip, but here he's just a third wheel kept out of most of the action. Notice his expression when Joan says that S.A. is wonderful?

It certainly was an action-packed yarn, but the art was too good for the script.

Unlike many early 40s superhero comics, the art is anything but static, it's dynamic and flowing. Yet the paneling is atrocious! For instance, the bad guys have the flame thrower, but then next panel, which nothing but a caption for explanation, our hero has it! That deserved a couple panels. The writer really let the artist down who did an amazing job for what he was handed.

Why, BTW, was Super-American avoiding bullets at the end? He took one, point blank, in the back, and laughed it off. He was dunked in molten metal, and came out joking! Somebody (or, everybody in the 40s, it seems) has a really indeterminate power set! The magnesium bit was clever, though.