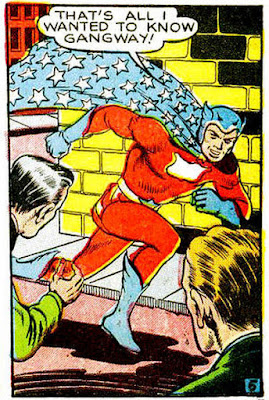 Super-American was a short-lived patriotic superhero feature for Fiction House’s Fight Comics. He lasted four issues, numbers 15 through 18, in 1941. In this origin story he volunteers to come back in time from a far-future America where the President of the United States wears tight underwear and hangs out with other men in underwear.

This is one of those headache-inducing (for me, anyway) stories about time travel. If Super-American had saved America from invasion by hordes of fifth columnists in 1941, then Allen Bruce, inventor, would not have had to call on him in the future through the Chronopticon, because it would have already been done. (I can feel the throbbing in my head already. Rather than risk a stroke I shall change the subject.)

Dan Zolnerowich, a really fine artist/illustrator working in comic books in those early days, did the story. And the story is outrageous: ruthless dictator takes over, forces Congress to change laws, which causes Super-American to proclaim, “This seems a trifle unconstitutional!” Well, yeah...and more than a trifle. 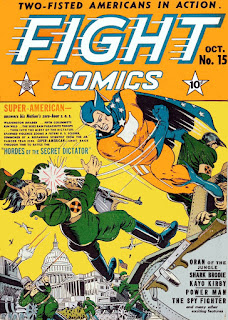 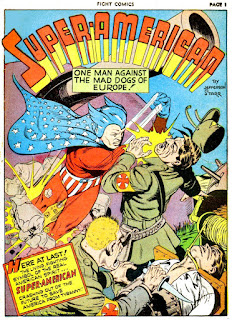 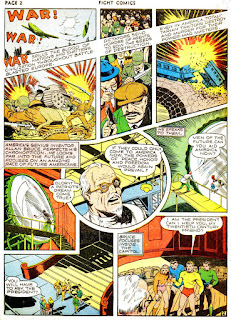 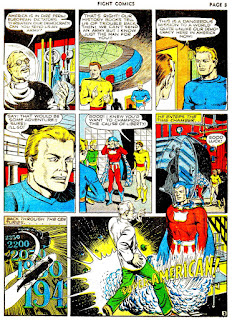 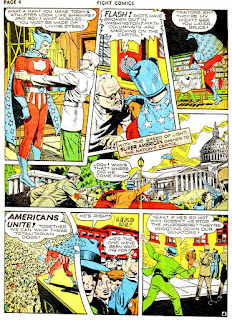 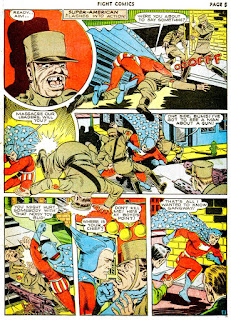 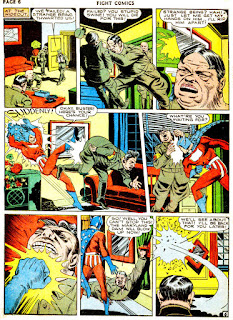 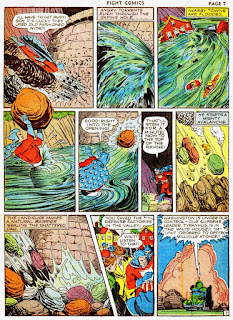 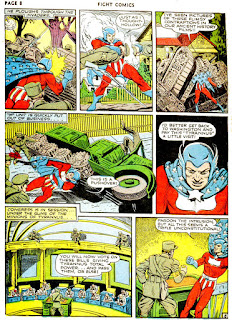 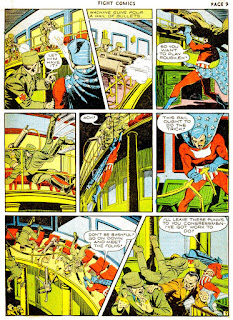 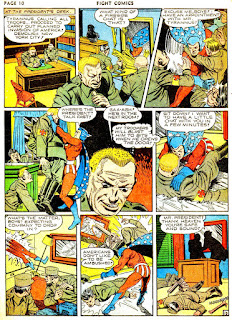 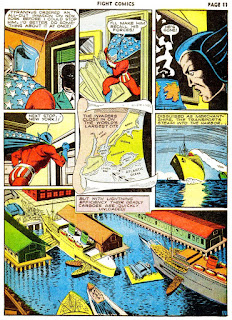 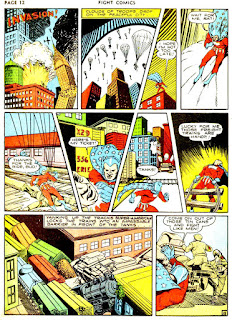 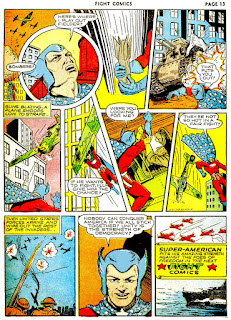 WOW Super American OMG!!!!!!!!! This blows my mind Pappy OMG Deb is gonna flip! Is he pubic domane enuff 4 us 2 hire him? I wunderer

Across those four issues, the stories grow increasingly hysterical until the final one (by "Jefferson Starr") gives us a drooling, fanged hunchbacked evil Nazi genius flying around in Super-American's outfit, cackling "So ends the dream of America!"

There's also some moderately nasty scenes of the villain torturing an American, from an era when patriotic Americans insisted they found the very idea repellent.

OMG this is tha like GR8EREST supity hero of all times yo OMG!

Alicia, Debbie, yep, Super-American is in public domain. Free to use.

But I'll bet he wouldn't mind getting scratched behind those blue kitty kat ears by either or both of you.

BillyWitchDoctor, wow! Thanks for the preview. I look forward to the ugly evil Nazi hunchbacked genius. In comic book parlance, ugly equals evil. We know now that evil wears many forms...some of them very handsome.

There are very few things that make me as squeamish as torture. I am curious about that sequence, though. I appreciate the heads-up.

That president of the future looks awfully buff. All those CURRENT presidents who make sure the cameras catch them JOGGING now look even more comical.

Grant, all part of a public relations campaign to make citizens think their president is physically fit. That seems comparatively new to me...can you imagine Ronald Reagan or Richard Nixon jogging? Not to mention LBJ, JFK, Ike or Truman.