Number 1959: Ravin' about the Raven Sisters 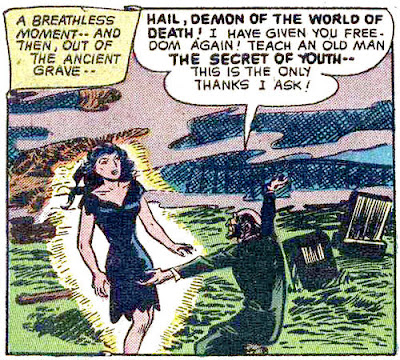 It is day two of our ACG Week.

The publisher was prolific with comic books based on the supernatural. Beginning with Adventures Into the Unknown, followed by Forbidden Worlds — both surviving until ACG shut down in 1967 — and then added Out of the Night and Skeleton Hand, and even The Clutching Hand, a one-shot, which were gone by the time the Comics Code was implemented.

The supernaturals usually involved a young couple facing some horrible unearthly menace, yet winning out in the end. It was a formula that worked, because they used it a lot. So it is with “The Raven Sisters” from Out of the Night #3 (1952). Most of the eight pages are backstory, telling us that 300 years ago the Raven Sisters were evil vampire witches who could become ravens (not bats). It also shows the hero, Larry, is very handy with sharpened wooden stakes, using them as javelins against the sisters. Just another day in the life of an American Comics Group supernatural, showing that despite the threatening evil, love conquers all!*

Karswell showed this story in his blog, The Horrors of it All, in 2008. The Grand Comics Database tells us that Pete Riss did the artwork, and Norman Fruman the script. Riss was a journeyman comic book artist who worked for several publishers during the forties and fifties. 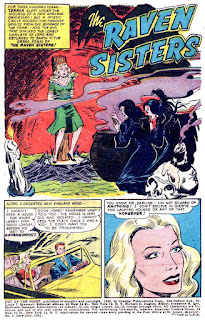 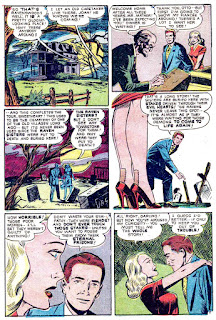 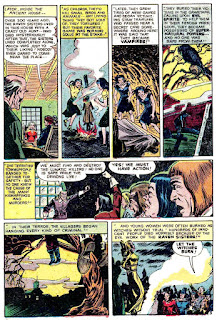 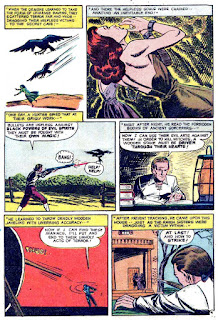 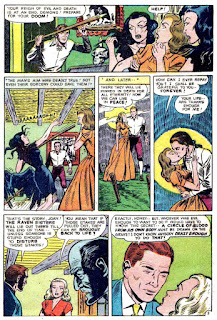 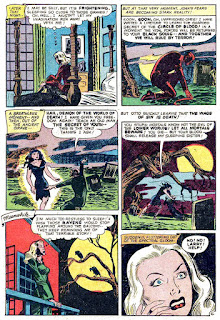 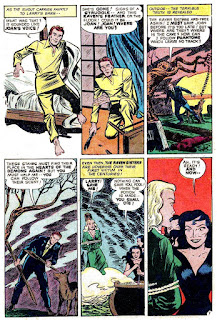 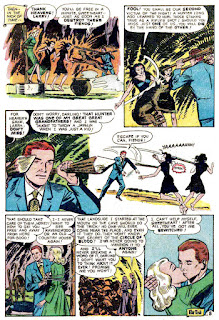 *Notice the burning candle on the left side of the splash panel. If it wasn’t a deliberate joke by the artist, then it was Freudian.
Posted by Pappy at 12:01 AM

I love this nutty Out of the Night spooker. And that's because I love any story in which there's a dismissed checklist of fatal don'ts ("I don't want you to be frightened of the family farm, honey; just remember not to pull any of the raven-pecked lighting rods out of those cursed psychopaths in shallow graves behind the house. We cool?") that lead to a rampage by some easily-overcome evil ("We're ancient immortal witch-pires, hell-bent on spree-killing... oh drat, foiled by a city slicker with a stick!"). I kind of want to read the same story from the POV of that plucky dog.

Thanks for an excellent theme week, Pappy!