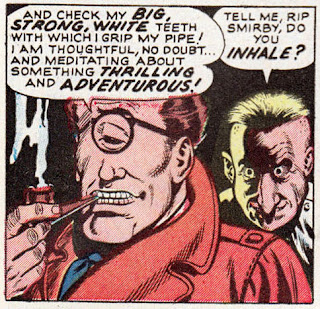 Nuts! was published by the small publisher, Premier Magazines of Wilmington, Delaware (only 42 individual comic books published, according to the GCD). It was yet another Mad imitator. Issue #1 was published in 1954, and featured this totally whack story, “Marvin’s Monster.” Among the chopping off of body parts (without blood...must remember, good taste always!) it has a (loose) caricature of Alex Raymond’s Rip Kirby. I guess the cyclopean eyed character is because “Rip Smirby” is a private eye? Oh, the satire...oh, the guffaws...oh, the what the f----?!

Hy Fleishman did the artwork. Fleishman was an excellent comic book artist whose work seems mostly confined to those smaller publishers. I showed more by Fleishman in 2013, in a Dick Tracy satire from the last issue of Nuts! See the link below. In that posting I brought up John Benson and Jay Lynch’s book on the Mad imitators, The Sincerest Form of Parody, a book I still recommend to anyone interested in the subject. “Marvin’s Monster” is also reprinted in that book. 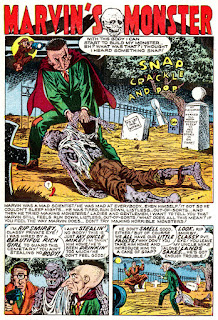 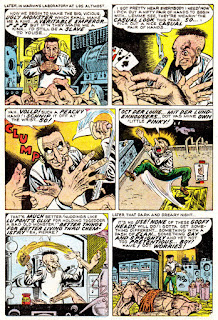 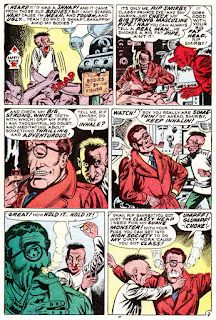 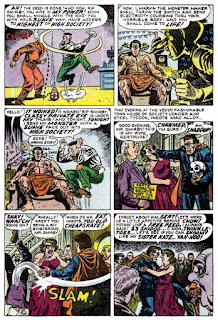 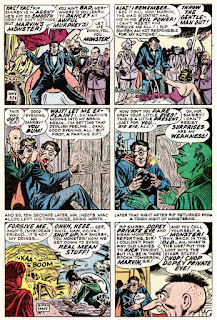 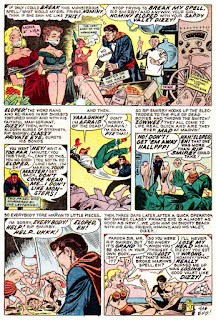 As promised, here is the link to Nuts! #4. Just click on the thumbnail. 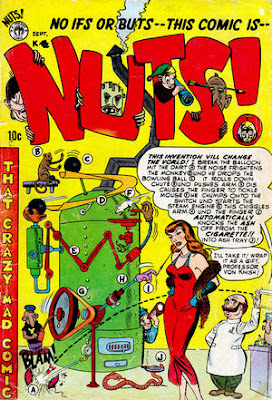 Let me also recommend "The Sincerest Form of Parody," it's a great book, and there were certainly mad imitators in it that are worth some chuckles.

I think the final panel "Water on the knee" joke is kind of indicative of a lot of the imitators, that all you really needed was a visual pun, funny or not. I do like the following "panel killed by lettering" though!

One really never knows what one will get from you, Pappy. From supernatural suspense to silly superhero to wild parody, it's always a surprise, and I wouldn't have it any other way. This choice, though, has its problems. When I was a kid, I loved the Mad and Cracked movie parodies, but there were always jokes I just didn't get because they were too "adult" for me. "Marvin's Monster" is definitely a story for its time, full of dated comedy and references.

Some of the background elements (a takeoff on Will Elder's brilliant Mad jokes?) and dialogue I understood--Snap, Crackle, and Pop; 23 Skidoo; Burma Shave; The (Very) Last of the Mohicans--but other stuff is obviously meant for readers who were alive in '54, or else who have wider cultural knowledge than I. Who's the guy sitting in the sky in the splash panel? What is "Bodies by Fisher"? Who's the bald guy behind the curtain on Page 4, Panel 3? Outer Mongolia? Also, are the folks in the background at the party supposed to be famous people, such as the cowboy? And is that Richard Nixon (Page 5, Panel 1)??

Basically, Fleishman's art is good, but I would've enjoyed this selection more had I been more "in the know." Ya know?

Brian, I agree about The Sincerest Form of Parody. I still believe, though, that most of the Mad imitations had a problem because they looked at the external things the artists did in Mad, the little signs, etc., and seemed to think that was what was funny. They didn't match Kurtzman's creativity. But even Kurtzman couldn't always keep up. Some of his own parodies were kind of flat, but when he was good, he was great.

Ryan...you are correct, sir! Many of the references are of their era, and even though I lived through it I don't recognize all of them. I lived in the West, and some of them are New York-centric. (My first exposure to Yiddish slang was from Mad.)

Body by Fisher was the slogan used by General Motors. Fisher Body built the bodies on GM cars, after GM got controlling interest of their stock in the twenties. Fisher made car bodies and going back, even carriages in the pre-auto era. That slogan was promoted heavily by GM.