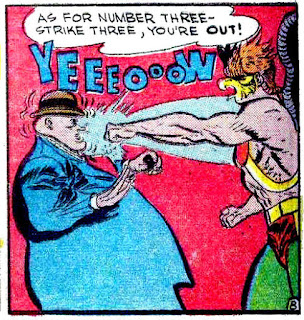 Joe Kubert was very young when he drew “The Man With the Amazing Nose” for Flash Comics #70 (1946). He was born August, 1926, so I figure he was 19 when he drew this story. He used a technique in some of the panels I haven’t seen before. Some of the figures’ lower bodies are outlined (see the teaser panel above), with no detail, just color fill-in. Hmmm. It’s a bit too technique-y, if you know what I mean. Even the callow Kubert was good enough he did not need to resort to such tricks.

Gardner Fox, credited by the GCD for writing the story, resorted to a trick I also have not seen before, having a perfume-smelling character (“Proboscis Jones”) take on different personalities through sense of smell. (The kids who read the story and opened a dictionary learned a word, “proboscis.”)*

I am bothered by the false advertising represented by the cover. I got excited seeing a gorilla in boxing regalia, only to find out it was a symbolic cover. That would have been an editorial decision. As we know, the powers-that-be at DC Comics knew even then that putting an ape or gorilla on a cover meant higher sales. Oh well...good early Kubert cover art, anyway, even if I turned up my proboscis at such base deception. 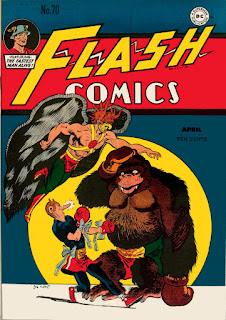 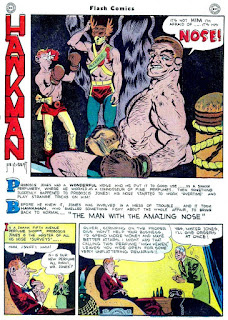 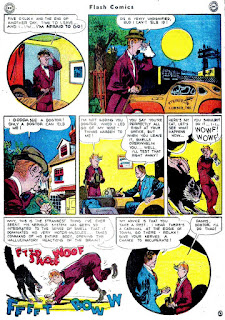 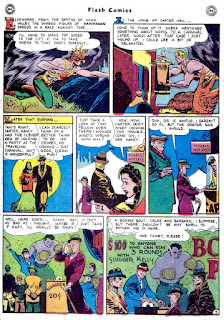 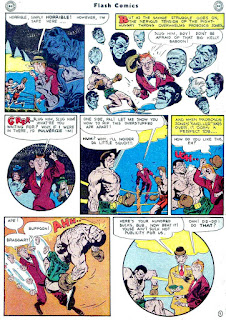 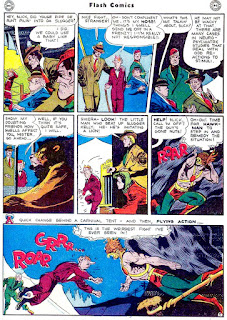 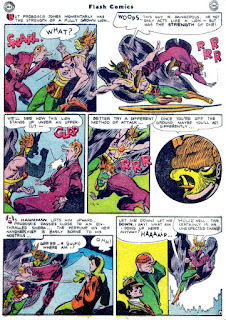 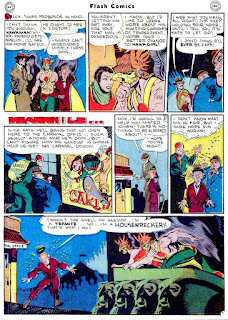 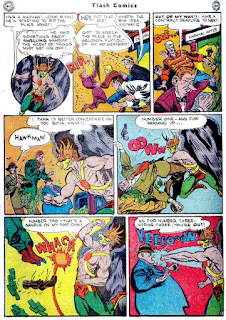 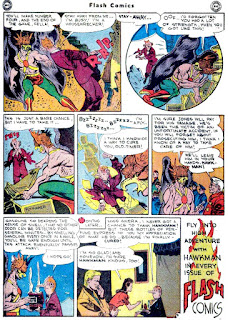 *KIDS! DO NOT TRY THIS AT HOME! Do not try sniffing gasoline as Hawkman has Proboscis Jones do at the end of the story. As an Internet site warns us: Gasoline contains methane and benzene, which are dangerous hydrocarbons. Can do harm to your lungs when inhaling fumes.
Posted by Pappy at 12:01 AM

While I wouldn't discount the lung damage, huffing gasoline can also cause damage to the brain or heart attack, and increases one's chances of developing leukemia.

The sense of smell truly is particularly likely to trigger strong psychological responses.

Considering the gorilla-cover fetish, I wonder why DC never thought to give Congorilla his own book during the Silver Age, or at least a shot in Brave and the Bold?

I always had one weird problem with Hawkman (and granted I wasn't a DC kid, but a Marvel zombie) -- the wings. They are so dark and big they always take a prominent part of the panel, leaving big splotches of dark color all over the page.

It's not so much the wings themselves, but their gray color and box-y shape. And you always have to position your character in such a way to get the wings out of the action.

The 19 year old Kubert already had most of his recognizable style in place here.

Brian, I believe that comic artists paint themselves into a corner when designing costumes or characters that are hard to draw for just the reasons you mention. I thought Kubert was as good as can be expected when he drew Hawkman, especially the Silver Age revival.

Another character's costume I would hate to draw is Spider-Man's. That webbing, ugh.