Plastic Man: No cats were harmed or killed 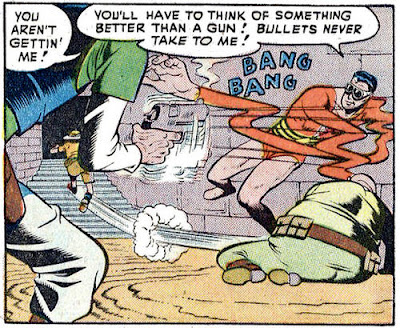 Looks like you readers get a bonus today...this was set to appear on May 11, but due to Pappy's fumbling fingers hitting the wrong key it popped up today. So, out of sequence or not, here it is.

Plastic Man punches a cat in this story, so before I get readers boycotting me for showing animal cruelty, let me make it clear that even though it is a comic book, I do not condone kitty-kicking in any form. A spoiler is the cat is not a cat. That's that!

(P.S. I love cats. We have a spoiled cat named Ramses, whose name sounds perfect for the theme of our story today. Here is a picture of Ramses, a stately-looking feline fellow.) 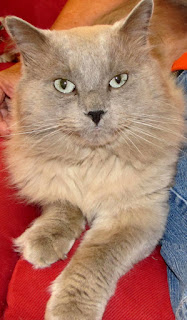 Mummy stories are always popular, stories taking place in Egypt, in pyramids...curses on tombs and ancient pharaohs* and such. And this is such a tale. It is from Police Comics #72 (1947). Although unsigned, the Grand Comics Database gives credit for art and inking to Jack Cole. Cole gets credit for the writing, too. I was wondering as I read it if it was common for Cole to use the exclamations "GRAWK!" and "YAWP!" from his characters.

*"Pharaoh” is spelled wrong throughout the story. 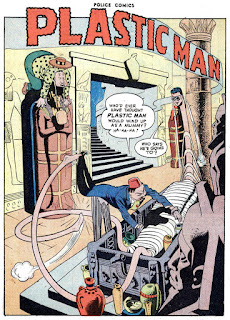 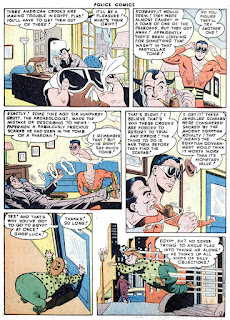 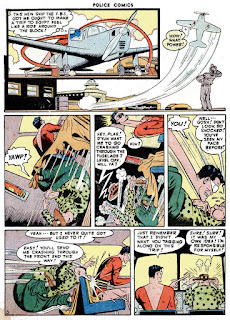 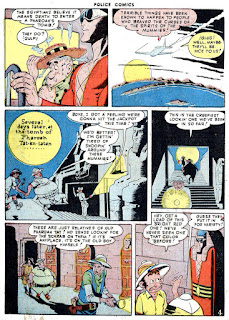 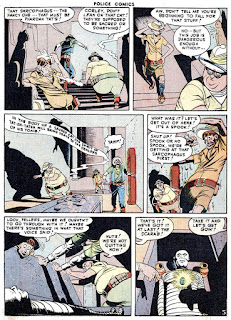 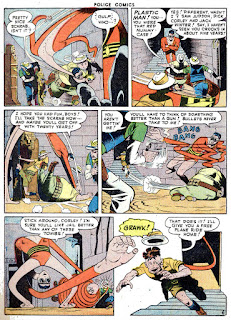 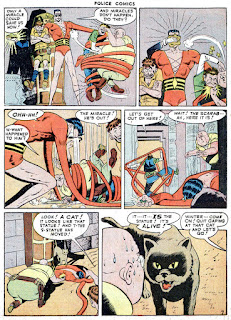 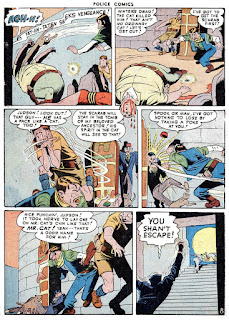 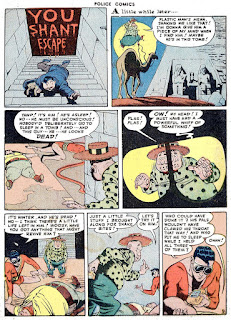 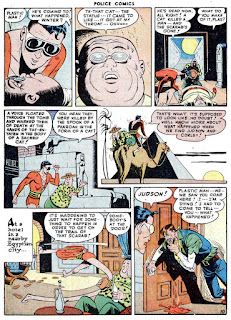 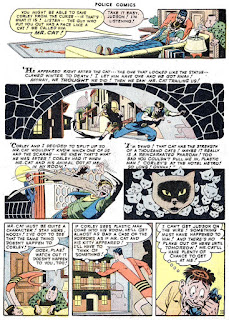 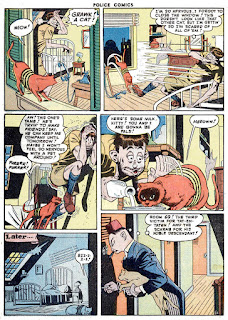 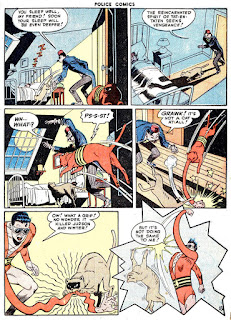 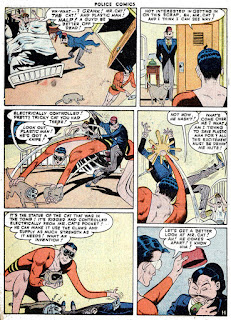 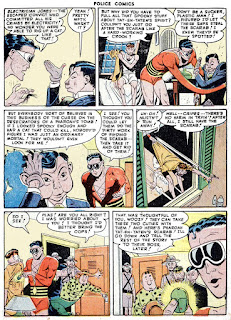 Obviously beautiful work by Cole, and I'm no expert but I wouldn't think this was anybody else but Cole.

There's a lot going on in this story, it's pretty well crafted and gives a lot of chances of crazy characters with distinct looks. But maybe a little too much fat guy butt, I think Cole kind of grinds that one into the ground :) Woozy's sequence in the plane is a real joy, that's a great piece of comic art.

BTW, something I never actually noticed to my detriment, and maybe Cole is upping his game here, but the backgrounds in places are just fabulous. There's a good bit of how Eisner did backgrounds in there.

Ramses is one beautiful cat, Pappy.
they come and go, you know.

I mean, cats. Last one, i found in November, poor little thing, was just a stray black kitten with his head stuck in a hole, crying for help.
Now I'll have to... er... operate on him, else he'll be a problem for his female friends we've gathered in our house, and for our furniture.
Five of them on second floor, and currently, four are black (Lovecraft would be pleased).
Some of them crippled, some one-eyed or diabetics, etc.
Fifteen in the whole colony, and darn proud of them. :D

Anyway, Cole's art is great, as usual. Page 6 made me think: "Eat your heart out, Mr. Fantastic!"

Brian, you know that Cole worked on the Spirit when Eisner was drafted. and I believe that artists working for Eisner probably did some work at Quality, also. I have nothing to back that up, it's just that the two businesses were joined at the hip.

Cole did draw a lot of fat butts, didn't he? And why was Woozy fat in the first place? I guess Cole just thought it was funny.

J D, I take care of three strays, of which Ramses was one. We have a female Siamese and her son, and Ramses is an opportunist who dropped in one day, saw that he could get fed, and became the cat who came to dinner.

Are you running a veterinary in your house? A city ordinance where I live forbids more than three cats or three dogs per household.

We think Ramses's striking coloring is some Russian Blue mixed into his lineage. And although my son won't admit it, I believe he named Ramses after a brand of condoms.

Although I'm not a cat person, I've had two cats now, each named “Joe” by other persons. The most recent one died on the morning of 22 March; fortunately, I was awake and with him at the time.

Plastic Man needed to see Woozy's presence not as a problem, but as a condition of existence — the difference being that problems have solutions.

I don't know why Plastic Man couldn't save Judson, and perhaps Winter. Plastic Man should have been able to form something like the perfect bandage for their wounds!

Judson's desire that Corley be saved was somewhat endearing.

Visually, I was most struck by 4:2, which exaggerates the curvature of the Earth to very good effect, uses the Sun to imply direction of travel, and renders the plane elegantly.

"A city ordinance where I live forbids more than three cats or three dogs per household."

Lovecraft would NOT be pleased with that. We got nothing like that.

Veterinary, no, just an "hobby" I took from my mother.

Daniel, sorry you lost your cat, Joe. I don't know how many I have had die in nearly 50 years. I didn't think I was a cat person until I got married, and my wife was. I became a cat person out of necessity, but I like it except for the inevitable sad parts.

That panel that struck you struck me too. The story is very well designed, and shows Cole, and whomever else might have worked on it with him, at the top of their skills.

J D, anyone who takes care of animals is a good person in my estimation. So, keep doing what you are doing.

The new profile photo is recent, to replace the 2008 picture I have been using for quite a while.