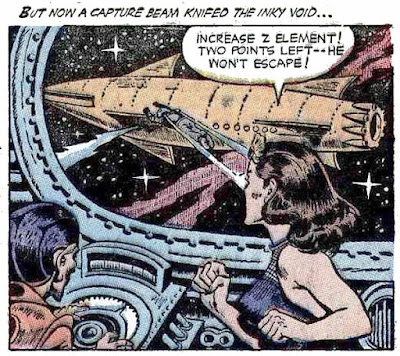 This is the second in our science fiction theme week, Otherworldly Tales. In this six-page story set in a vessel somewhere between Mars and Earth, a captured Earth crew is given a mind-reading treatment by a queen and her crew. Toward the end of the Fiction House comics line the forties style was passé, so in their single science-fiction magazine, Planet Comics, they went to a more traditional science fiction anthology format.

[SPOILER] I’m not sure what the snap ending of this story has to do with the rest of it, but in similar circumstances I would advise Captain Lance Rawley to lay down a big bet on the New York Giants in the 1954 World Series. That year the Cleveland Indians were heavily favored, yet the Giants took the series in four games. After all, Captain Rawley is now stuck in the past, and his job doesn’t exist. [END SPOILER] 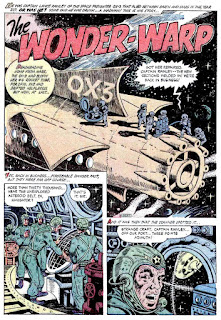 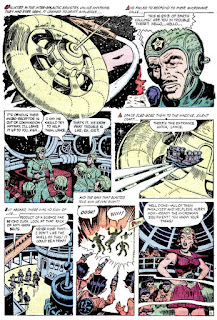 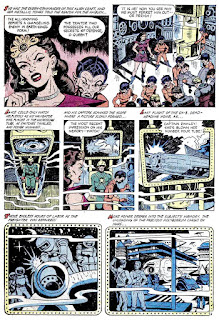 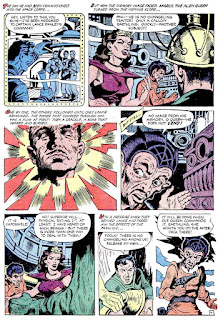 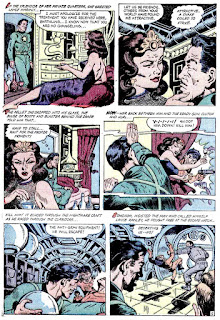 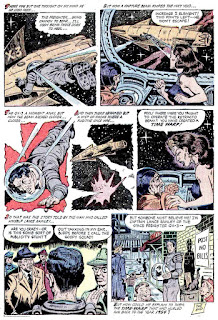 Uhhhh… okay. That was all pretty ad hoc. We don't get an revelation of what the All-Knowing is. There's an unexplained term “Earth-king”. (Somebody misread “Earthling”?) The aliens try to drug the captain by trickery, instead of just doing it while he were physically restrained. A time-warp is introduced ex machina. And a man who's supposedly of a superior sort cannot quickly accept that those around him have no good reason for believing his story.

Albert seems to have lost track of whom he was drawing where in 5:6, and that just adds to the sense of incoherence.

I wouldn't be prepared with a knowledge of what sporting bets to place if hurdled back to 1853 (or to 1954). I carry a fair amount of technological information in my head, but I'd fret about the ethics of using it, as I'd basically be plagiarizing. (Starting from 1954, I could make a fortune with the laser, but then the inventor of the laser wouldn't!) Maybe I'd just invest; it'd be insider trading, but there'd be no associated agency problem. (Likewise for betting on the Giants, actually.)

Daniel, to my knowledge no one has invented time travel yet. But who knows about the future? Time travelers could be here now collecting information for their history books about our unusual 2016 election cycle.

Despite worrying about stepping on a butterfly and changing the history of the world, I think minor things could be done that would not cause chaos in the time stream, like making investments on sure things, as long as one didn't get greedy. For me, if suddenly warped into 1954, I'd be looking for things like old comic books and pulp magazines in second-hand shops. What I'd do with them I don't know. Hope I'd get yanked back into my own time, I suppose, so I could sell them.

Well, here's one of those sci-fi stories that relies on "fake" science--"molybderum," "z element," tractor beams that open time warps. Fantasy, an amateur scripter, or just lazy writing? Obviously, the worst part was that ending. Was that supposed to be some sort of twist? It felt more like a cliffhanger--the beginning of the next part of the tale.

Daniel's comments reminded me of one of my favorite cheesy sci-fi/action flicks, Timecop starring Jean-Claude Van Damme. The plot involves a corrupt senator sending agents back through time to make money for his presidential campaign--either through outright theft or investment in "sure thing" stocks and such.

Personally, I'd probably do kind of like you, Pappy: I'd go back to April 1938 and buy a bunch of 10-cent copies of Action Comics #1. It would be an easy, low-risk way to make millions in the present, and have a copy left over for me to display. Seriously, they didn't all sell out at the time, so the chances of a ripple effect are almost nil, right?

Yes, the story develops in quite a silly way, yet some premises are intriguing.
For instance, the Captain is undoubtedly different from the rest of the crew, and his "strong will" is poor explanation.
The Queen says "I've heard of such creatures", and this makes me think he could be a mutant of sorts, like the "Psychics" in Babylon 5, maybe.
That evil Mr. Cechov, remember?
Then the clumsy little guy mis-operates [is that a correct word?] the Tracto-Ray and he gets stranded in the 50's...
Would have worked better if the Captain WAS the chamgeling, maybe.
Nice art.

“Is Time Travel Impossible? A Financial Proof” by Marc Reinganum in The Journal of Portfolio Management v3 (1986) #1

Daniel, what can I say except I agree with the writer of the article that time travel does not exist. I believe in time travel in the sense that in our lives we are moving ahead in time second by second. It doesn't stop me from having fantasies of traveling back in time to correct my own mistakes, but if I could do that I wouldn't have the satisfaction of looking back on how mistakes have given me experience and taught me what not to do.

There has been some great science fiction, and I love a good time travel story. Dinosaur Beach by Keith Laumer springs immediately to mind. There have been others, but I don't have (heh-heh) the time to think of them right now.

J D, somehow I managed to miss Babylon 5, but I will take your word for it.

Yes, misoperates is a word. According to the first definition that popped up on Google it is a verb, the "third-person singular simple present indicative form of misoperate."

Ryan, the story is guilty on all those counts you mention.

One of the reasons I showed it is because it was so obviously different from the kind of space opera that made Planet Comics what it was during its heyday. Instead of transposing a pirate story or Western into space, it was actually an attempt at a science fiction story, and because of its brevity (or laziness, as you mention) it didn't make a lot of sense.

Perhaps someone should write a story about how comic-book collectors went back into the past, saved golden-age comic books from the paper drives of World War II, and thereby disrupted the packing of supplies, ultimately leading to Axis victory.

Daniel, that would be a butterfly effect event. Unless in reality the people at he recycle plants were saving comic books and pulp magazines to read, and recycling newspapers and more traditional magazines, instead. Who can say?