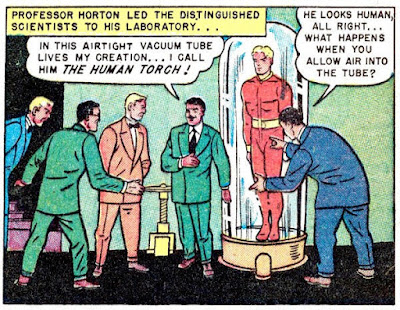 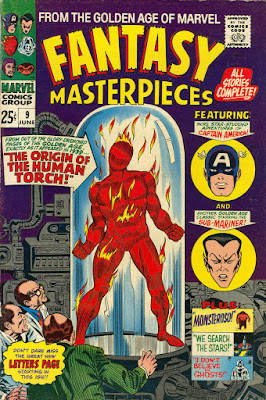 Over the years there have been several more reprints of Marvel Comics #1, which is one of the keystones of any major comic book collection. I give Marvel credit for making an attempt to show fans in the sixties what the previous generation saw in those early days of comic book history.

Looking in the Grand Comics Database I don’t see any reprints listed for the version of the Human Torch origin I am showing today. It appeared in 1948 in Marvel Mystery Comics #92. Despite what it says at the bottom of the last panel, the promised stories of the early days of the Torch didn’t happen because the book was canceled. The Torch, Sub-Mariner and Captain America had a later revival in the fifties, which was short-lived.

Neither Atlas Tales or GCD list credits for this story. 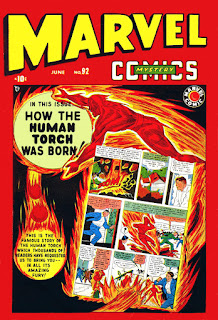 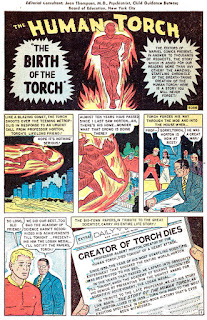 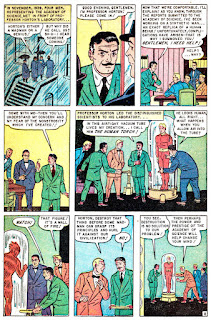 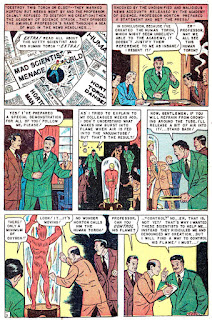 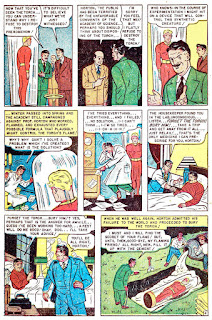 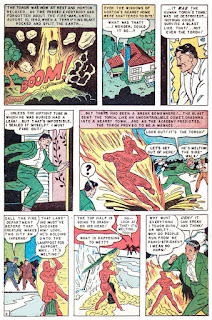 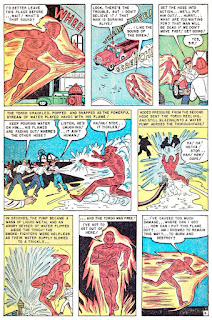 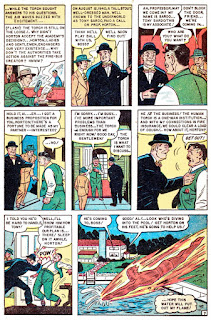 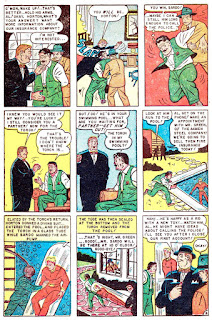 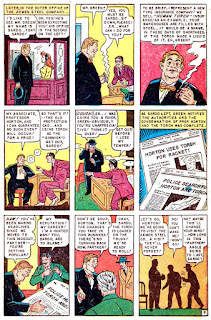 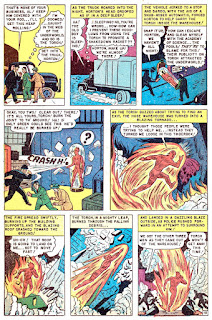 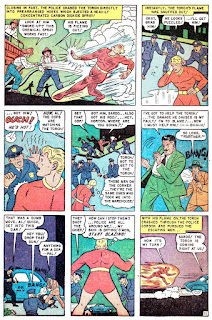 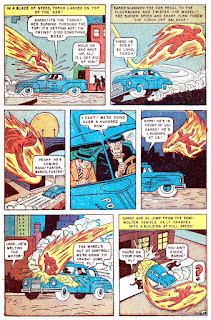 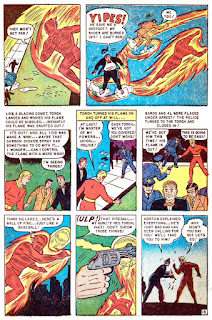 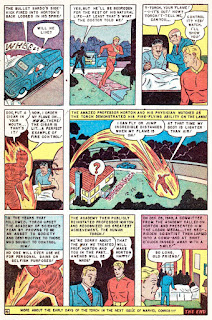 The issues of Fantasy Masterpieces in which Marvel reprinted the golden-age material were quite the revelation for me, and I prized each one. (Some years later, I got copies of the earlier issues, which as you surely know were of speculative fiction not involving superheroes.) I was saddened when they were discontinued. (I woudl not have been consoled had I known that they were replaced by Marvel Super-Heroes.) Perhaps that were in part because so much of the more interesting golden-age material would run afoul of the Comics Code Authority; I know that some of the reprints were at least skirting the boundaries.

I suppose that the first presentation of the story were considered too primitive in 1948; but in '67 we wanted to see the original stuff, as crude as it might be! (But, like eleventy zillion other guys, I noticed how much better the Sub-Mariner art looked.)

Daniel, reprints of Golden Age material in those days was scarce, so even inferior reprints like those from Marvel were exciting for me.

In 1948 when that retelling of the Human Torch must've been exciting, but ultimately disappointing if they believed there would be more, only to meet with...nothing.

"The most exciting spectacle in comic-book history" reads like Stan Lee hyperbole. I got so immune to it in the '60s that my eyes just skipped over it, and even when I read it I didn't really "see" it.

Pappy, thanks so much for reprinting this story. I've had to cease supporting Marvel's Golden Age Reprints- when there are any- simply because the digital recoloring process is so atrocious I feel it "strips" the pages of 'weight'. This was a fantastic re-telling and I was always curious about this story based upon the cover. I fondly remember Christmas, 1989- I was 10 years old, so I'm a little younger than you guys- and receiving the then-50th Anniversary hardcover reprint of Marvel Comics #1 and being fascinated by the original Human Torch especially (along with the crudeness of the art).

I don't have my doorstopper of a volume that collected the early issues of Marvel (Mystery) Comics, but I'm pretty sure this retelling was somewhat different from Carl Burgos' original. I don't remember the stuff about the science academy and Horton becoming bedridden. Maybe those were deleted scenes from Marvel Comics #1, and #92 is the director's cut that restores them.

The art on the Golden Age Torch was almost supernaturally awful, but the Human Torch was such an inspired and original creation that the series seemed to survive on the sheer momentum generated by the concept, even as the stories became increasingly conventional with the Torch, originally an uncontrollable monster, getting a kid sidekick and joining the police force. Those wartime covers by Alex Schomburg show how awesome the Torch could've been, but Burgos was entitled to it because his was the original vision and was one of the great brainstorms of the era.

This is one fine example of my point of view, about american literature:
comics, as the latest (and maybe last) form of western myth's creation:
"The Torch" has a history, and its/his history develops into new literary creations (Simon Williams / The Vision, etc.). You think I'm over the top on this?

"Why? Why can't I solve a problem that I've created? What is the solution?"

You call this kid stuff?

J D, you make an interesting point about Western myth creation. I think of superheroes as being in a long tradition of introducing godlike characters to either guide, reward or punish mortals. I hadn't thought of them as myths, but thinking back on movies made from these characters, especially Superman, Christian beliefs are commingled with the fantasy to make a God/Savior-fantasy out of the character.

What I have noticed about these American characters is their traditional, stereotyped Americanness, even jingoism. Many of the most popular came from Jewish-American creators, fairly recent emigrants, during a time when Jews were being persecuted and murdered in parts of Europe, and during a time there was a push to keep America isolated from the problems of the rest of the world. We couldn't and didn't, and after the war the characters who survived the vicissitudes of popularity and sales have gone through a whole lot of hands, adding to their mythology. But in their purest form, closest to their 1930's creation by their original artists, writers, editors and publishers. they were startling concepts to suddenly appear at such a troubled time in world history

Russ, I remember the quotes from Burgos' daughter of her father's disappointment and anger at losing any rights to his character from the corporation, because of the old way of doing business. What a shame.

William, I am with you, and I don't support the digital re-coloring.

When I mentioned to Daniel that I bought the Fantasy Masterpieces reprints in the sixties even though they were inferior, I did not realize how inferior until I looked at some of them again recently. Hooboy, they would have been smart to use the techniques (by Jack Adler? Is my recollection right?) that were developed to do the stories for Feiffer's The Great Comic Book Heroes, and later for some very fine reproductions in the seventies at DC Comics.

Ryan, I refer back to my comments to J D about these original characters passing through many hands. Everyone has their own vision, and is trying to "improve" the originals.

Right now, to get a break from the computer monitor, I am going through my old Batman and Detective Comics from the forties and fifties. When I look at Batman graphic novels on store shelves and my public library, the many changes have been made to a relatively simple concept over the years by fleets of writers, artists and editors, I know why my interest dried up.

I understand and defend the rights of today's talent to do what they want, because Batman is a character now known around the world. And it is a changed world, at that. But for me (and the closed Pappy universe of comic books printed on pulp paper) the definitive Batman will always be that character developed during those years the vision was conceived and controlled by a relatively few people who were there at the beginning.

"A perfect example of fire control!"

I luv this art, if u find out who drew it pls let me no, we mite wanna hire him or her yo OMG!!

Alicia, I hope we find out who drew it. We have at least a couple of readers who are expert art spotters, and I'm sure the request coming from you will do a lot to prompt them to respond.

I believe it is pencils by Alan Bellman with inks by Chris Rule.