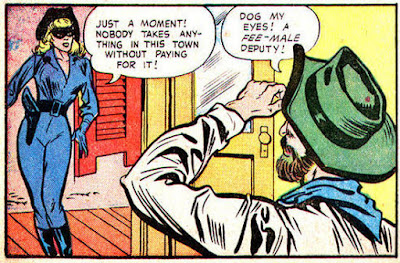 The Black Phantom, with her form-fitting outfit and Jane Russell chest, reminds me the line, “If they’d had girls like this, the Wild West would’ve been a lot wilder!” (Harvey Kurtzman, “Cowboy!” Mad #20.)

Black Phantom normally appeared as a backup feature. She got a one-shot issue in 1954 from Magazine Enterprises, from which this story is taken. The so-called “Unholy Three” owlhoots had no chance against her smoking six-gun in this sharply illustrated tale drawn by Frank Bolle. It is written by Gardner Fox.

This story has been reprinted a couple of times in the past couple of years; these are scans from the original issue. Despite her anachronistic costume, or more likely because of it, she still holds an appeal to those of us with an eye for such beauty. 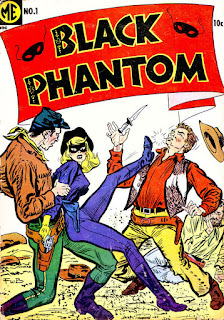 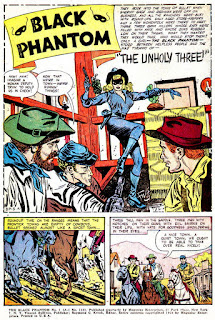 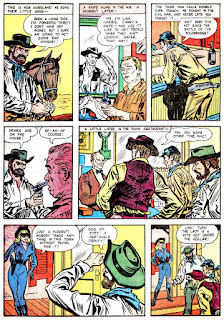 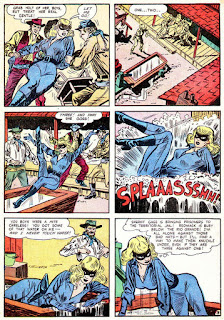 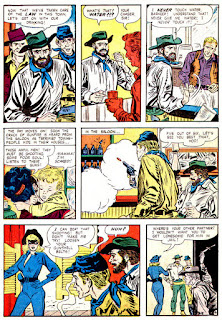 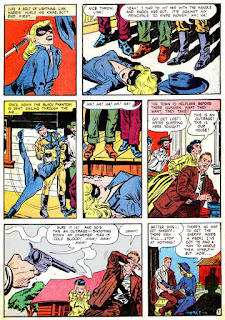 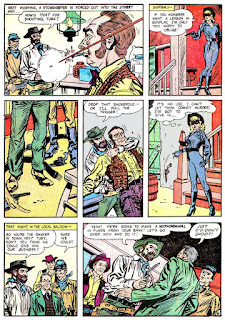 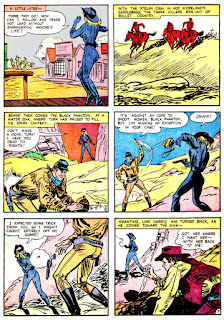 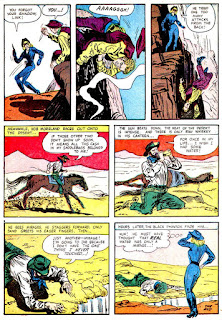 I think that it's somewhat interesting to have a protagonist who's relatively ineffectual, yet keeps plugging away until she succeeds. But, unless written for comedic effect, costumed heroes are conventionally supposed to be super-heroes, with greater than normal efficacy. And I don't think that there has ever been a market for a male superhero who is routinely humiliated by three rather ordinary thugs. (“Look! It's Try-Try-Again-Man!”)

There are, of course, two twists to this story. The first is of a person who has made a practice of avoiding something finding himself in desperate need of it. The second is of that person (apparently) dying because, repeatedly fooled by the illusion of salvation, he does not believe in it when it is within reach. The principal problem is that these twists are both delivered in the last three panels of a forty-nine panel story. Neither twist is particularly moving. The mirage-twist isn't even set-up until the 48th panel, and the Black Phantom has to make quite an inferential leap to clarify that Moreland died thus (as opposed just to running out of energy inches away from the water).

More generally, the story itself is one of the Black Phantom sort of flopping around until the last two pages, in which the thugs leave town and she is suddenly more efficacious.

But, yeah, she's a dame in a cowgirl catsuit, doing a lot of posing as if being photographed or drawn for a '50s girly magazine — which I guess that she were.

That Hod (or Hob) Moreland must've really stunk since he never touched water.

I've got a lot of respect for Gardner Fox as a writer, but did he think he didn't need to write a decent tale here because the hero was a woman? It reminded me of a Don Knotts film, more comedy than suspenseful Western, since Black Phantom kept getting her shapely ass handed to her in humiliating fashion by three rogues who didn't come off as terribly competent. Also, the story was rather stiff and clunky, almost episodic, and the pathetic ending played like the creators just ran out of pages.

Funny thing is, I didn't feel like Black Phantom really earned her victory, because the bad guys had several opportunities to kill her and chose not to--she could've easily gotten a knife in the back rather than the hilt to her head. But was she as merciful to them? Nah.

Ryan, Daniel, both of your criticisms are right on, but I'll bet not one reader thought of any of that when it was new. They were probably all young men and boys who liked that cowgirl catsuit (Daniel's apt term), and would have had fantasies of slapping leather with Black Phantom.

That was an absolutely painful story to read.

Thank some god somewhere that she had a great butt because she didn't have anything else going for her. Note that she didn't actually kill two of the bad guys, they did themselves in in the most what-passes-for-irony-around-these-parts sort of ways.

I'll give Fox a bit of credit here in that I don't think this junk yard of a story was there because it was sexist; cowboy comics have this weird problem that everybody is carrying a gun and usually the problems can be solved right off the bat (i.e., just go in guns blazing. Mind you, I'm not advocating this for law enforcement!) So there's a lot of back and forth where the hero keeps getting knocked out or detained in some manner, until the end when the guns come out.

Now it was certainly super sexist in execution, but it's very much a genre type of story.

And the artist certainly traced from 50s girly magazines, as has been noted.

Excellent point, Brian. In real life if everyone is armed it is just who gets their gun out and shoots the other guy first. There is no tapping each other on the noggin or pussyfooting around the situation.

I remember all of those Lone Ranger episodes of my youth where, except for shooting guns out of bad mens' hands, the Lone Ranger didn't use his six-shooters to kill. And then there were the villains' attempts to lay him low by conking him on the cabeza. He took quite a few blows like that. He must have walked around with a permanent headache from the concussions, not to mention dementia when he got older.

Of course, this story is unreal, anyway. Even the "soiled doves" of that era were probably less provocatively dressed than our heroine.