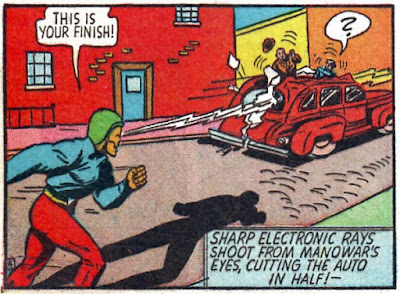 A couple of days ago I showed a retold origin of the Human Torch. The original Human Torch was created by Carl Burgos when he was freelancing with the Funnies, Inc. comic art shop. As comic fans know, the Torch and Sub-Mariner, by Bill Everett, appeared in Marvel Comics #1 (title changed after that first issue to Marvel Mystery Comics) in 1939. Burgos had a long career in comics, but like several other creators, never had a character again that was as popular or long-lasting as the Human Torch. For instance, he also created Manowar, the White Streak, for Target Comics.

Don Markstein’s Toonopedia gives an overview of the history of the double-named superhero, without telling of an origin. So this story, written and drawn by Burgos for Target Comics #5 (1940), is a what-you-see-is-what-you-get tale...it is what Manowar, the White Streak does, kick the asses of “warmongers.” I have to say, despite the confusing name(s) and no origin, I can get behind a superhero whose superpower is used to put down warmongers.

Bill Everett did the dynamic cover illustration featuring the character. 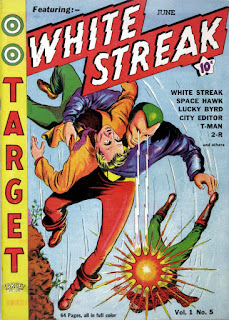 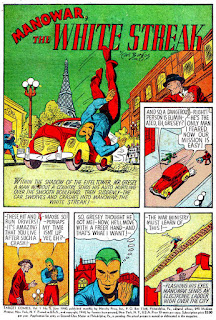 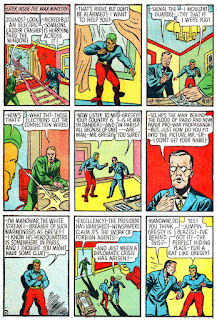 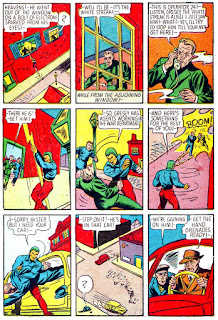 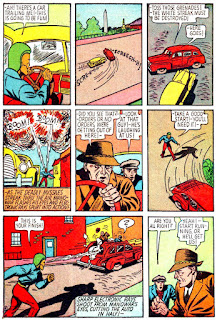 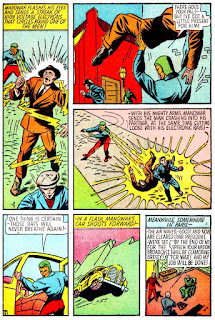 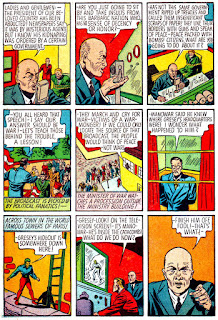 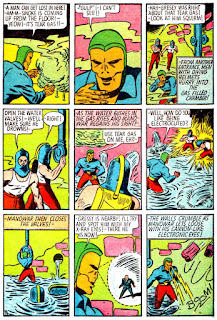 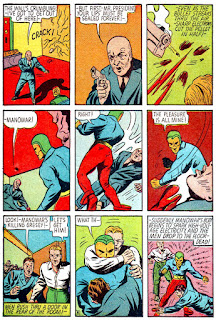 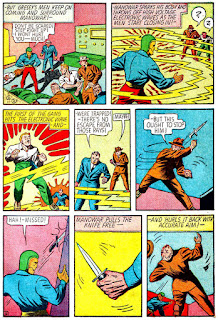 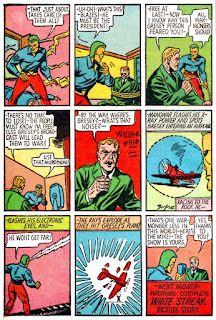 Wow. This comic book was dated for June of 1940, so I infer that it were released in May or perhaps in April. The German state began its invasion of France on 10 May. The idea that France could have stayed out of war in 1940 probably seemed quite foolish even as this magazine were on the racks.

None-the-less, my sympathies tend to lie with the anti-war types. While, at some point, war can be inevitable, there are often earlier points at which rational choices — not choices informed by prophecy, but choices reasoned from evidence available at the time — would have made war extremely unlikely. This was certainly the case with World War II.

And, when I look at the division in golden-age comics between those who fantasized about heroes who would stop the madness and those who preached that the US needed to get into war as soon as it might, my heart is with the former.

Alas, the major parties are now offering us nothing but Presidential candidates who either have already supported ill-considered acts of war (and may be expected to continue doing so), or beat their chests about their willingness or plans to use US military might in contexts that I find grotesque.

This story looks relatively primitive for 1940. On top of Burgos's limitations, there is mostly a 3×3 layout for each page, with the greatest deviation in the top row of page 9 (in which what would be a second cell is divided in half between two panels). There is a two-line border separating narrative panes almost as if they are separate panels (expect in the cases of three panels which have no border separating the narration). Page numbers are all in lower-left corners (except for the number of page 10, which is oddly in the lower-left corner of the bottom-center panel).

Manowar may not be into war, but he's pretty happy killing people. As a consequence, he destroyed at least 14 potential witnesses who might have been useful in identifying and countering the party behind Gresey.

And what's this in 5:5? Manowar stole that car in 3:7, but it's blithely called his car! There ain't no justice!