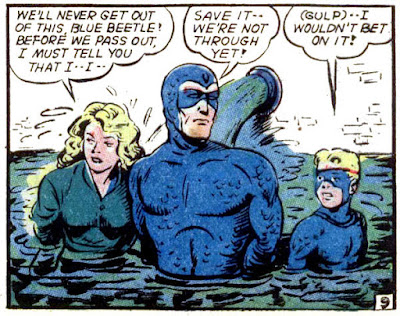 This story, drawn in the first year of America’s combat involvement in World War II, has “Jappies” and “Japanazis” as villains. Madam Fang is supposed to be Japanese, but artist Chas Quinlan apparently didn’t use any reference material for her appearance, and she has a sort of nondescript look. ( Patrolman Mike does describe her as “kind of Chinee (sic) looking, but a fine woman.”) Just another comic book of its time. It’s from Blue Beetle #15 (1942).

For the second time in a week (check out the Supermouse story from March 16), the word “spalpeen” appears in a story. 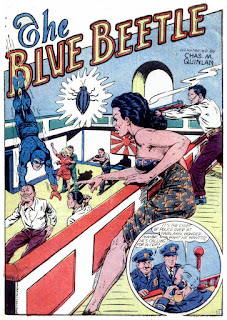 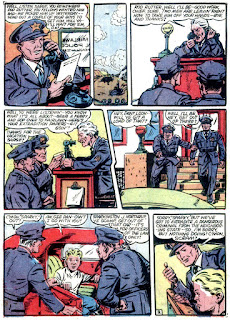 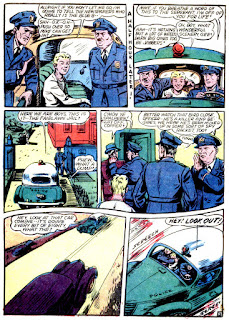 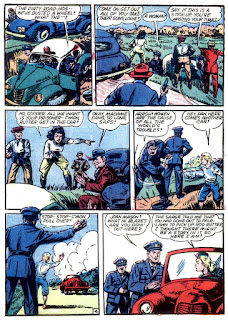 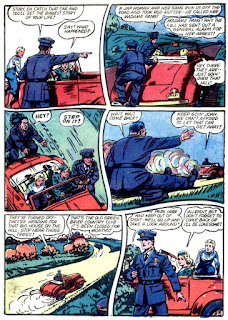 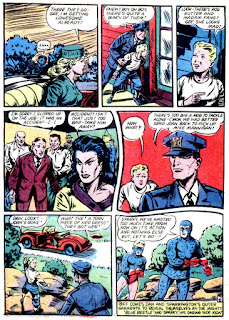 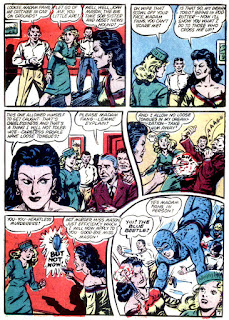 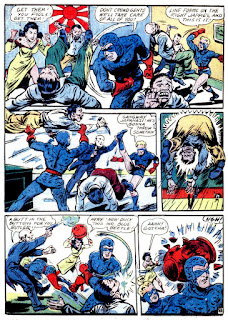 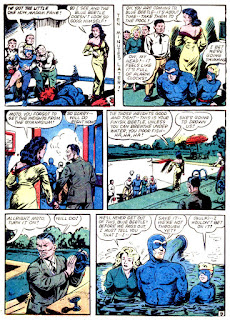 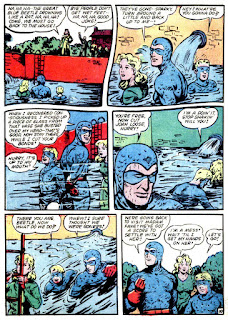 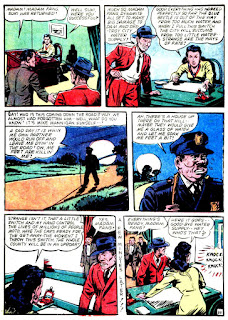 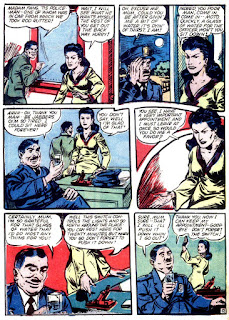 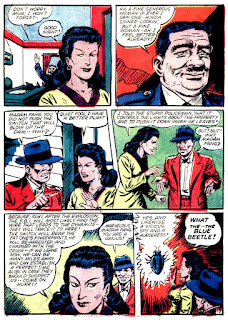 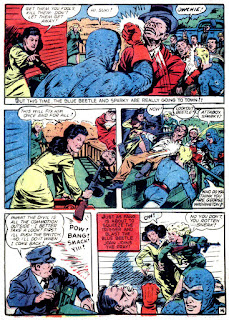 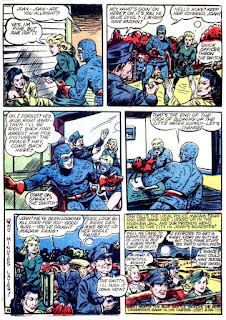 Here is another Blue Beetle story by Quinlan, which I showed in 2014. Just click on the thumbnail: 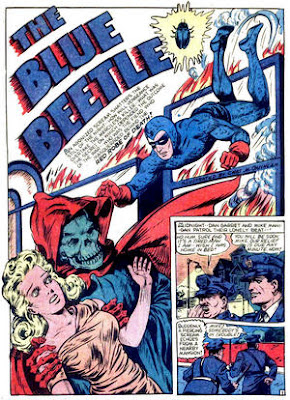 "Okay, I'm going to throw this vase at you, but first I'll warn you by saying, 'Now duck this, Mr. Blue Beetle!' Aw, you were too slow and stupid to duck, even after my warning! Oh, and, officer, now that you know I'm evil, be sure to throw that suspicious-looking switch like I told you to!"

Lemme tell ya, one of my biggest pet peeves about the Golden Age is the frailty of the sidekick secret identity. "Here, Bucky, put on this costume and we'll call you...Bucky!" The Black Terror's poor sidekick didn't even have a hero-worthy name--Tim. And "Sparky" is no better. What's worse is that his distinctive blond hair is visible, so only an idiot (like Mike) would fall for that ruse.

Boy, I want a swimming pool that fills up so fast! It got waste-deep in, like, a minute. The unfortunate side effect was that it turned Joan's green dress (temporarily) blue.

I don't understand the beetle signal, or whatever you call it. Is it supposed to be like Spider-Man's belt-light? Is B.B.'s voice coming out of the beetle? It makes even less sense than the Hangman's little silhouette.

The Asian people originally most demonized by a notion of a Yellow Peril were of course the Chinese. During World War II, efforts were made to redirect that race-hatred towards the Japanese and indeed to intensify it. But, as we see here, the older antipathy abided into the War. Not only is the word “Chinee” used (albeït by a distinctively ignorant character), but Madam(e) Fang has a Chinese name, rather than a Japanese one, because Asians were largely undifferentiated by American popular culture.

(It was only within my own life-time that the Supreme Court ordered an end to race quotas that deliberately limited the number of Asian immigrants in general.)

The standing of Irish immigrants and of Irish-Americans was not nearly so awful by that time; but, into the 20th Century, the Irish and Irish-Americans were amongst those Caucasians not regarded as white; and Mike Mannigan represented yet another ethnic stereotype.

Even setting aside the expressions of racism, the story is so carelessly constructed that it seems pointless to catalogue the problems.

I think the artist was actually trying for a Asian look, but just lacked the skill to pull it off (and the super heavy inking would have erased a lot of that.) Which is sad, because racist Asian art was pretty common place (and easy) to pull off.

Blue Beetle has the most non-descript costume. There's nothing exciting about it.

Also, if we are going with stereotypes, let's not forget "Woman with riding crop pants = evil!" Sexy, but evil!

Ryan, lately I haven't gone into that whole secret identity thing, with disguises that wouldn't fool anyone except those who have the inability to recognize faces, Prosopagnosia.

Dick "Robin" Grayson, Bucky Barnes, Black Terror's pal, Tim...on and on. These sidekicks would give away a hero's secret identity in no time. So beyond putting minors in harm's way, these boy buddies of grown men weren't well thought out. I've heard they were meant for young readers to identify with, but did they achieve their goal? I wanted to be Batman, not Robin. For that reason I think the instant boy-to-man, Captain Marvel-adult identity of underage Billy Batson, was more acceptable to me.

Daniel, going back through American history we find those rules about immigration that would seem to have discouraged all but the most eager to get out of their own country.

I have never asked my own Asian daughter-in-law, who is from Vietnam, exactly why she thought America would be better than her own country. My son is vague about the reason his wife decided it would be a good idea to pull up stakes, leave home and family and come to America. She has been lucky; she hasn't experienced the open racial hatred that would have met her even a few decades ago. Or if she has, neither she nor my son have ever said anything about it.

I believe that immigrants bring something to a society, bits of their culture, that enrich us. Others with whom I have discussed the topic don't feel the same. In this election year of 2016 that kind of resentment is coming out in ugly waves, just as it has many times in American history.

Brian, I have always thought that the Blue Beetle costume was taken from the Phantom. His name was inspired by the Green Hornet. Blue Beetle was just a hero cobbled together from other sources and used the standard elements of costumed heroes, without a whole lot of originality behind him.

So why is Blue Beetle (albeit much changed since this early appearance) still around?

I admit I liked the Ditko Blue Beetle era at Charlton in the sixties the best.

It's not so much that the Blue Bee'le is still with us as that his name is still with us. That name could be got cheaply, and Ditko did interesting things while using it for a character. Dan Garrett existed as a back-story element, dragged along with the brand.

The second Blue Beetle somewhat reinvigorated the brand, but was ultimately kicked to the side-lines, ostensibly in pursuit of diversity, but in the context of a programme that found one rationale or another for replacement (overt or covert) of most of the heroes of the Silver Age who were then owned by DC. Of course, comic books no longer make enough money directly to warrant their publication, yet do seem to serve as infrastructure for lucrative movies and tie-in products; leading to some bizarre product, by writers, artists, and editors who often seem actively to hate their potential customers. :-(

Had the Beetle brand been left simply associated with Dan Garrett, in his original costume or garbed as a chain-mailed Phantom, then he'd probably make no more cameo appearances.

Daniel, I remember a story going around after Warner bought DC, that after looking at the DC comic book line and its declining sales, recommended the comic books be killed. Wiser heads prevailed and the comics were published to keep alive the licensing. When the movies and TV shows and tie-ins, toys and such, stop making money the comics will disappear.

"When the movies and TV shows and tie-ins, toys and such, stop making money the comics will disappear."

Oh my gosh. That's what's going on. I've been seeing comments that newer comics decline but you spell it out frankly. Shows what I know who so rarely even look at a new comic, rarer to buy any.

Our Œconomist, Brian and Ryan all add fine comments. I enjoy reading Pappy's introductions as well as this comments section as much as the comics themselves. Since upgrading my computer's operating system, I haven't been able to access it consistently. I have yet to figure it out. It highlights a big part of why I read this blog. Thanks.

Thank you for your kind words on behalf of me and of the guys who take the time to consistently comment. You have written some interesting notes yourself, and I always appreciate hearing from you.

Your problems upon upgrading your OS are precisely the reason I stick with my tried-and-true, 2003 XP Pro OS. They will have to pry my OS out of my cold, dead fingers!