Number 1871: Carnie Callahan and his gang of special people 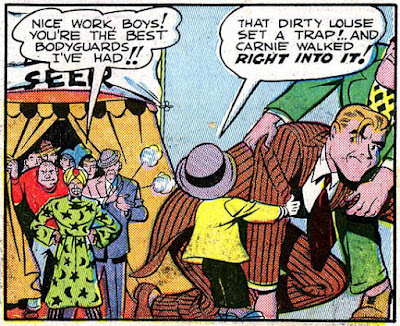 Step right up, ladies and gentlemen, boys and girls! In 1944 for 10¢...a thin dime, the tenth part of a dollar...you could see the origin story of the Barker, the one-and-only Carnie Callahan. Carnie is in charge of a wondrous group of very special and talented human beings, who make up the sideshow of Colonel Lane’s Mammoth Circus.

As a gift to readers encountering this carnival crew here at Pappy’s, we let you in free! You don’t even have to come up with a dime. Is that generous? Is that a gift? Well, sure it is! (We make our money on rigged games of chance and on overpriced concessions in the midway.)

The Barker, for the mid-forties, was a fairly long-running feature. This first story, drawn by the inimitable Jack Cole and written by Joe Millard, appeared in National Comics # 42 (1944), and moved the former cover feature, Uncle Sam, to the back of the book. Uncle Sam would soon be gone, but Carnie and his group would go until the last issue of National, #75 in 1949. Not only that, he would have 15 issues of his own comic book. The reason is probably because artist Jack Cole left the Barker after a couple of issues, to be replaced by another of Quality Comics’ fantastic art talents, Klaus Nordling. Readers had no reason to feel they had been led into the tent by Jack Cole, and then once they had paid, bamboozled by an inferior product.

No need to take my word for it, either. You can link to a story by Nordling posted here nearly six years ago, after you finish reading today’s offering. 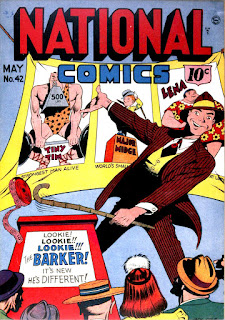 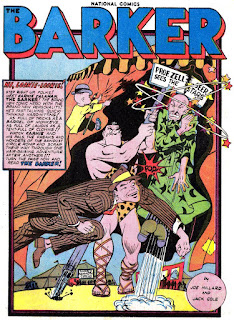 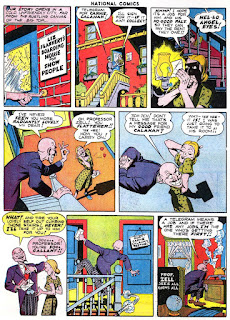 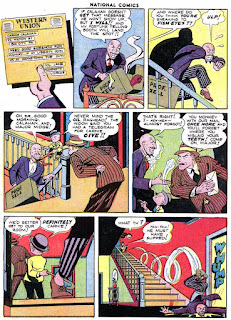 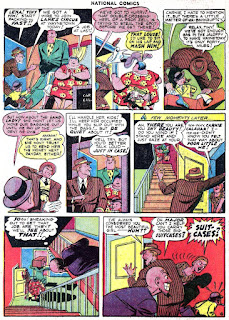 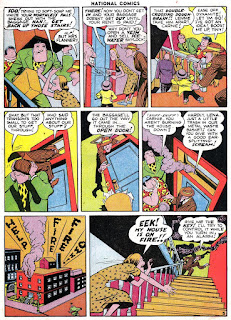 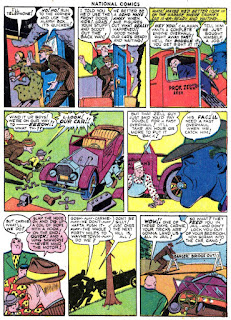 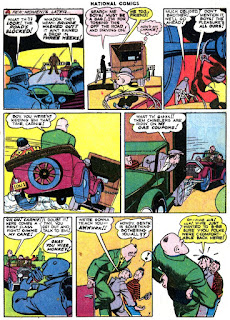 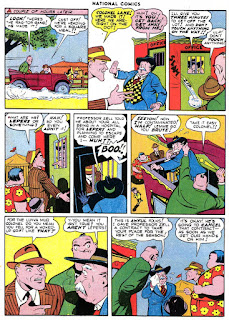 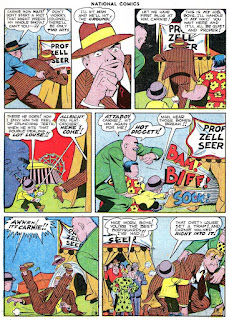 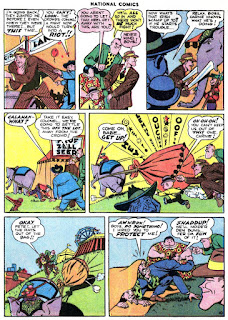 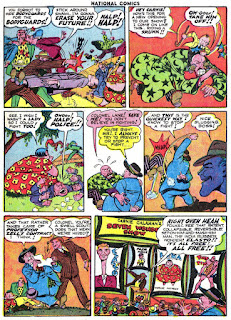 Enter the tent here, for a story from The Barker #5. Just click on the thumbnail. 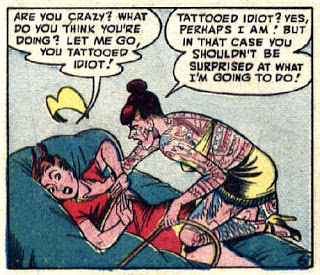 I get the feeling that the circus sideshow was a huge part of the culture back then. I remember reading there were several groups of this type in comics for a while, the main holdover being the Ringmaster and the Circus of Crime. Remember Dell Comics' series by John Stanley and Irving Tripp with the characters from Tod Browning's Freaks? Neither do I; I just made that up.

Lovely example of a story that manages to stand on his feet mostly because of Cole's art, because Millard's writing ... well, maybe its' just me (and besides, this is just Episode One), but it resembles a sequence of Mack Sennett's gags, only rather dull ones.

The story of the Tattooed Lady is definitely better. Nowadays, everybody likes going out with "living art galleries".
The Tattooed Lady is a fascinating figure. Why they did it, if it was considered reprehensible? Someone thinks it was a form of "rebellion":

Sad, sad story. I feel sorry for poor Tallulah. There was even a song by Groucho Marx on tattooed ladies, but I learned it from Kermit as a kid:

Although the frog omits an interesting line: "When she stands, the world gets littler / When she sits, she sits on Hitler".

"Them chiselers are ridin' on my gas coupons". I like this line of dialogue, too. Those coupons were not easy to get in 1944, so I guess that having your car pulled by another one (unwillingly) was like stealing, no kid stuff. "The Public Eye", a film starring Joe Pesci, was based, if I recall, on a gas coupon racket.

Happy Easter to you all.

J D, you know a lot about American culture, pop and otherwise, moreso than most Americans. If I asked 100 of my countrymen about "Lydia the Tattooed Lady" I'd bet 90% would not know the song. I'll bet the same percentage of that hypothetical group would not know what was meant by Mack Sennett comedies.

I have given up complaining about tattoos. At a recent gathering of my wife's family some of the youngsters were showing off new tattoos. I am now one of the family elders, and remember when I entered the family at age 21, what the folks who held that position at the time thought of long hair and beards. (The difference is that long hair and beards are not permanent like tattoos.)

Young people don't realize that the artwork looks better when their skin is young and firm. In the 1960s I met a crusty old long-haul truck driver who had a Betty Boop tat on his forearm. He said he got it when he was in the U.S. Navy in the 1930s. Maybe at that time Betty had all of her perkiness, but when he showed her to me on his leathery skin she had definitely lost her boop-oop-a-doop.

Here's a short blog entry about tats on girls, including a 1936 Life magazine article about people with major tattooing. (And speaking of long hair, wait until you see Apache Harry.)

Russ, wish you could have seen the expression on my face before I read your caveat lector about making up a John Stanley-Irv Tripp "Freaks" for Dell. I am thinking Tripp might not have been the best artist for the project, but Graham Ingels would have done his typical ghastly job. His carnivals were such hellish freakshows.

They were cute little miniature freaks that Tubby encountered after breaking into his parents' liquor cabinet.

That is one cool blog, Pappy.
Thanks for the link

Russ, that's also a good explanation for why Tubby saw those little men from Mars.

J D, you are welcome.