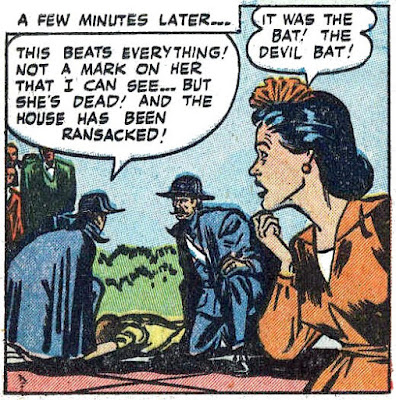 Today we have a crime story; not a traditional crime story, but instead a gang leader who is a hideous human bat.

Drawn by Maurice Del Bourgo, who had a style that complemented such unusual fare. From Wanted Comics #17 (1949). 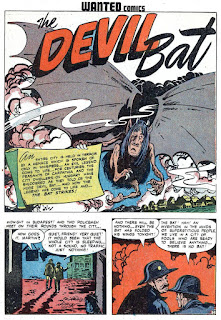 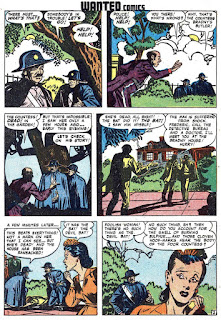 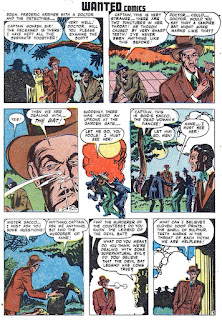 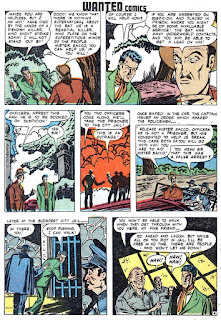 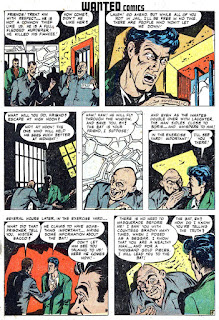 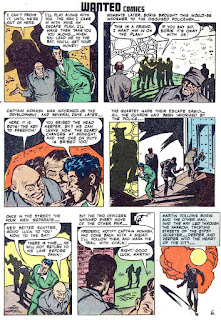 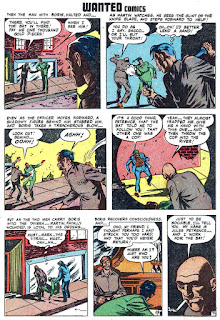 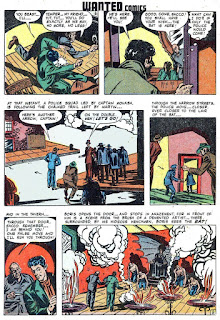 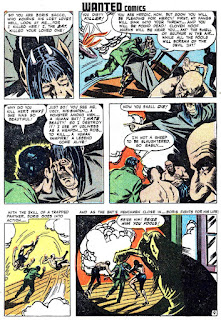 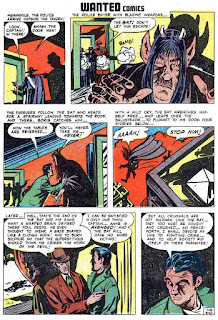 Del Bourgo also drew a version of the Salem witch trials for another issue of Wanted. Just click on the thumbnail. 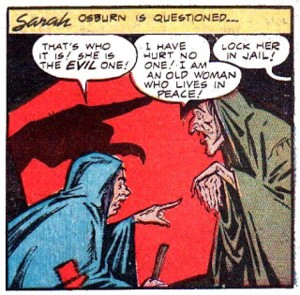 Eh? “the skill of a trapped panther”? Do panthers become more skillful when trapped?

A funny twist to have a man from a position of affluence devote his life to fighting crime because of a killing perpetrated by a bat man.

That ending seemed like it was the kicking off point for further Sacco adventures. But this was a crime anthology with one-off stories, right? Did this character ever appear again? Strange that they'd end it that way, unless it was based on a true story, but...devil bats?

I like the art, a little thick lines in places but a good mix of realistic and cartoon-ish. The bat is a bit more goofy than ugly!

The page with the gun battle and stabbing is very hard to follow, could have used a bit of editing.

Even though there's no super hero in this one, it's very much a 40s super hero story, in a crime comic, without a costume. It's a real miss-match of styles!

Thanks for showing another interesting artist.

I'm checking Del Bourgo's work and I don't think he did many Horror comics, all in all.
That's strange because his art is perfect for horror, with a grotesque touch.
Great splash panel in this story.

Daniel, another instance where an editor's hand was needed. Trapped animals are usually pissed off, but skillful, no. No skill is usually needed by a large cat with large claws and long, sharp teeth.

I personally would not want to put a panther in a cage unless he was anesthetized, and I was wearing armor and had six guys helping me who were actually doing the lifting while I supervised from a distance (like flying safely overhead in a helicopter).

J D, I got an e-mail or comment once from Del Bourgo's stepson, and I can't remember whether I published it or not.

"Del," as he called him, was a communist, and hung out with people who were likely on the FBI's watch list. That didn't stop him from being a fine cartoonist and comic book artist, but I wonder if his politics impeded his career.

He is an artist I respect, and I agree with Brian Barnes' comment about the art being a mix of realistic and cartoonish. That fits in with your observation of it being grotesque.

Ryan, I haven't read all the Wanted Comics issues, so I don't know, but after years of showing criminals doing mundane criminal acts, I like to throw some of the bizarre into the mix.

Ah! I imagine, then, that Del Bourgo's politics were finding some slight expression here!

When I read the name “Sacco”, I naturally thought of Nicola Sacco, one of a pair of left-anarchists who were accused of robbery and homicide perpetrated in 1920. Because of their political beliefs, their accusation, trial, and executions took-on wide-spread political significance, especially (though not exclusively) to those on the political left. (The matter is so involved that any attempt to summarize further is likely to provoke controversy.)

Daniel, the case of Sacco and Vanzetti was a cause célèbre for at least the first few decades of the twenty century, although I think modern readers might be less inclined to think of it unless they studied it in school. I appreciate you mentioning it. I have no idea whether Del Bourgo wrote the story, or whether using the name Sacco was just a coincidence.