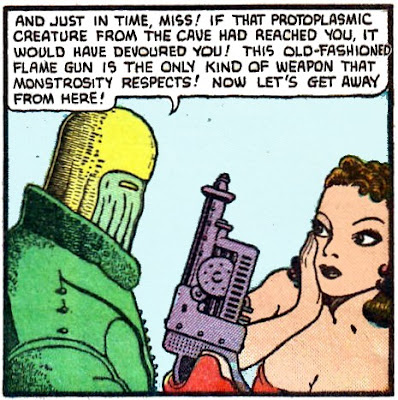 Last Friday I showed you a Carl Burgos story from Target Comics #5, and today the story that makes the issue so valuable. Basil Wolverton’s Spacehawk is introduced.

“The Creeping Death from Neptune” has been reprinted several times (I have three or four of the reprints in my own collection), but these are scans from the original, which appeared on newsstands in mid-1940. Spacehawk’s mask didn’t last for long, and when it was gone readers found Spacehawk to be a guy who looked a lot like many other comic book heroes of the age, even if in the strip in its early days the creatures Spacehawk encountered — besides a few pretty Earth girls — were as alien as Wolverton’s incredible imagination could make them. In its entry on the character, Toonopedia mentions letters to the editor from parents upset by their children seeing such grotesquerie. While Spacehawk eventually was brought to Earth to fight the enemies of America, the aliens Wolverton drew didn’t get any handsomer. 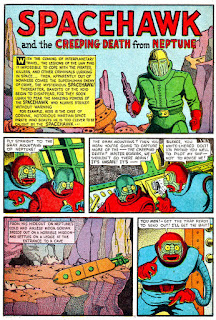 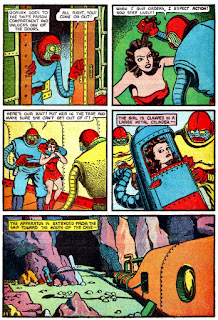 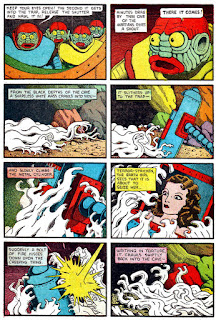 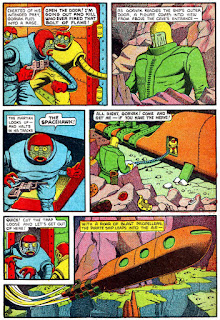 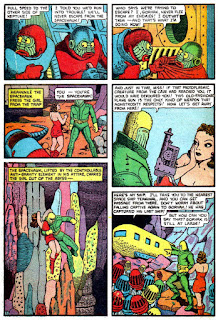 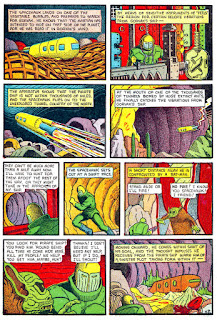 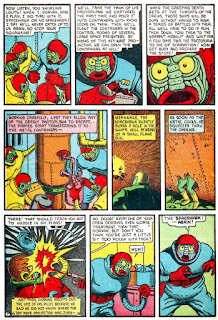 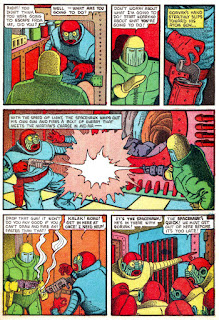 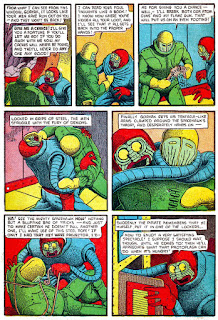 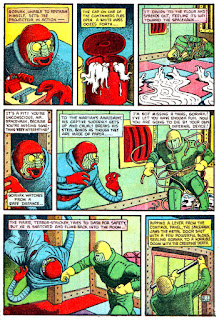 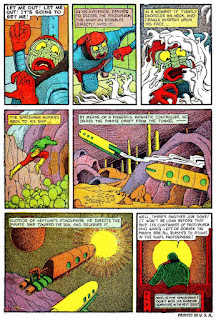 Although the quality of Wolverton's work is very considerably better, there's something of the same flavor to his early non-comedic stories as is found in that of Fletcher Hanks. The narration parallels, rather than complementing, the story-telling. The backgrounds are literally surreal. The principal character can look monstrous, has arbitrary superhuman abilities that remove obstacles, and metes-out bizarre justice. Grotesque creatures are introduced with somewhat superfluous effect on the tale. The conflict with the villain is protracted by strange choices on the part of the protagonist. The villain is destroyed by his own infernal device.

It appears that whoever did the clean-up here did a superlative job.

I have the Dark Horse Comics B&W reprints of some of Spacehawk's adventures, but it's cool to see the first one in color. It was mostly worth it for the unique art, because Spacehawk himself is really too powerful to be very interesting. Still, it was an amusing tale.

Daniel, it has crossed my mind that Hanks might have been inspired by Wolverton, although Hanks would appear to have carried the weirdness further than Basil. I think it may have had something to do with their individual lifestyles.

Ryan, while your comment that Spacehawk is too powerful to be very interesting might be challenged, I think it is more that Basil used the template of the stereotypical heroic figure on Spacehawk, and concentrated on bizarre villains and aliens. As with many other cartoonists, I believe the work of Chester Gould in Dick Tracy was an influence for the grotesque bad guys.

The protoplasm and the flame gun remind me of the doughpots and flame pistols of Weinbaum's "Parasite Planet".

Kitchen Wolf, noted. "Parasite Planet" was published in 1935, and Weinbaum's work during a very short career (died of lung cancer at age 33 in 1935) was influential. I am never surprised by any comic book writer or artist using motifs created by others.

Daniel, it looks like Pappy did some further clean up to my original scans of the book. They do look good. So happy to have this issue, even if my copy is coverless; and even happier that's it been shared so widely.

I absolutely see where people make the comparison between Wolverton and Hanks, but I don't see it so much myself. I think because, while their results actually wind up in a similar place, their methods of getting there were completely opposite from everything I can tell. Hanks got his results largely due to a lucky accident of incompetence, Wolverton was one of the most talented and meticulous creators of the Golden Age.

Eric, I don't often get a chance to thank the person who did the original scanning, but thanks to you for making this incredible book available.

I have scanned a lot of comic books from my own collection, and the old beat-up, coverless books are the best. Scanning is a process that can damage old comics, as I am well aware.