Number 1781: Bound to be popular: the original Wonder Woman 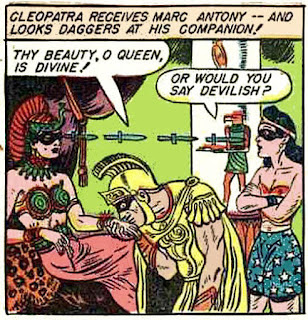 The creation of Wonder Woman was one of the most successful achievements of William Moulton Marston’s career, helped in no small part by the women in his life. Jill Lepore’s excellent book, The Secret Life of Wonder Woman, is an education in the early years of the women’s rights movement, Marston’s polygamous living arrangements with two women and their children, and Marston’s background as a psychologist, inventor, and self-promoting huckster.

As has been mentioned before, Marston was into bondage, domination and submission. It was the key plot element in many of the early Wonder Woman stories. When challenged, he used his psychology training to defend it. He claimed that the chains that held Wonder Woman were symbols: she was being shown breaking the chains with which men had bound women for centuries. He may not have passed his own lie detector test telling that whopper. The old boy liked seeing girls tied up, and used symbolism as an excuse. 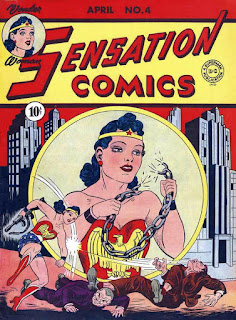 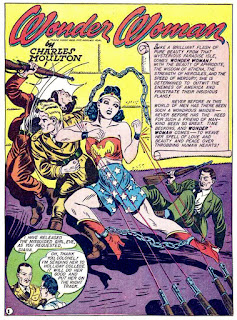 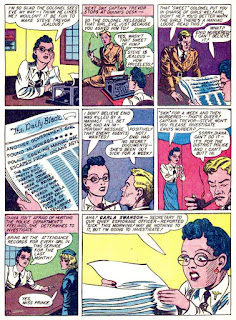 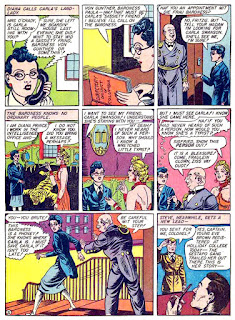 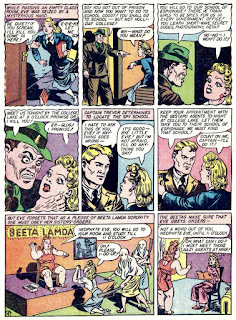 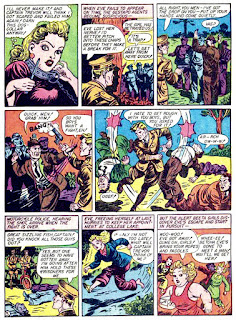 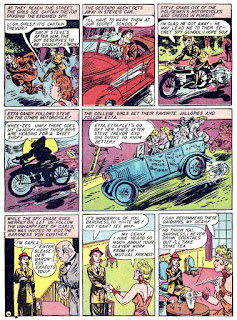 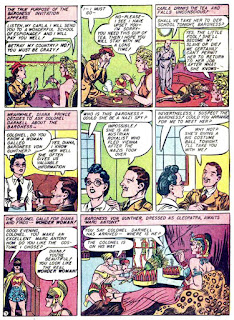 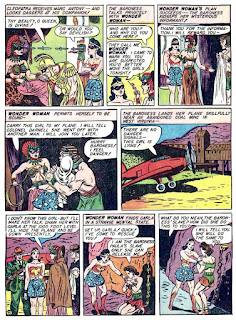 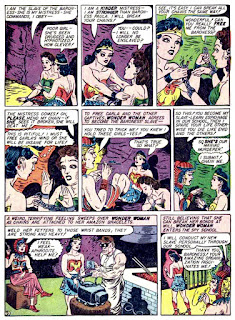 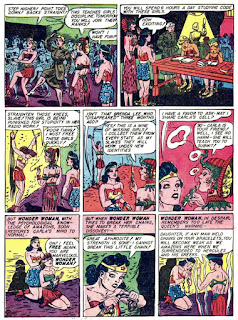 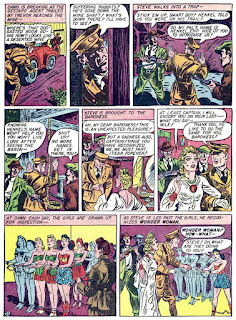 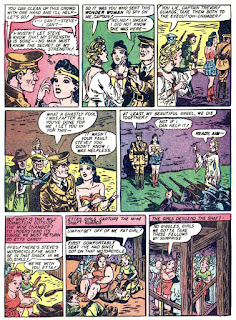 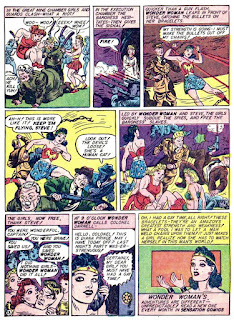 This story was included in DC's series The Wonder Woman Chronicles, a chronological collection of the early WW stuff (there were also series for Superman and Batman and the Silver Age Flash and Green Lantern). Unfortunately, Wondie only got three volumes before DC stopped the whole project, which sucks, because I really enjoyed Marston's version of the Amazing Amazon. It was fun and risque in a way that no subsequent writer ever captured. That may be why WW has had such a spotty publishing history, being constantly restarted and rebooted.

Hi Pappy! Thanks for another fun post! The artwork looks more sophisticated than HG Peters' usual cartoony stuff...could he have had a collaborator ?
I loved Lapore's book, too. Marston's story would make a great movie!

Ok, here we have Nazi cougars, forty's cars, silly costumes and dumb GUYS.
Oh, and a poor girl got paddled as a sorority hazing, some sixty years before Internet.
All in all, we are not so distant from Eneg and his Betty Page, at least in concept. Really, I'm not into this kind of things, though I don't mind to see a nice catfight every now and then. I'm also not into Wonder Woman (hey, that's the place for Steve Trevor :-)), no matter which decade and which interpretation of the her, maybe I just don't like the character.

That Marston was a peculiar man, I knew he was a shrink, but skipped the other... aspects of his personality. Honestly, I can't decide from what I see, if WW has to be considered (as she was) a feminist icon or just a stereotypized embodiment of a man's desires. A coin always has two faces, I guess.

Anyway, if I have to choose, what I like most is the Marlene Dietrich character, Ze Baroness. we had similar characters in certain comics of the 70's we used to trade at school.

Ryan, during the sixties comics fans voted for Alley Awards (named after Alley Oop) for best comic book, best artist, writer, editor, and even worst comic book. As I recall, Wonder Woman got the "honors" for worst comic at least a couple of those years.

I voted Wonder Woman for "worst." Then I saw that later incarnation of WW without her costume...ugh.

For what it's worth, I did like the first season of the television series with Lynda Carter. I have that on DVD.

Timdess, I believe H. G. Peter had assistants, like Bob Kane or Joe Shuster. For a time before his death Marston had a young woman helping him with the writing. It was a big production keeping up with the demand for product.

I would want no part of Marston's alternative family lifestyle. One wife is enough, but at least he had his women to support him during his low-earning years.

J D, your letter reminds me of the Rick Nelson song, "Garden Party":

"You can't please everyone, so you've got to please yourself." Hopefully you will be happier with some of my future choices.

Yes, but I am actually PLEASED with your post. It gave me more hints on WW origins, on Marston etc. And knowing about Marston's peculiarities spawned a stimulating doubt about the "feminist" side of Diana. I'd really like to know what you guys (and girls) think about it. Anything that makes me LEARN or DOUBT about something is welcome.
Sorry if i can't explain myself well, rest assured that I try.

And thanks for the song I didn't know. The Yoko-Walrus line is great. :-)

Saved by Etta Candy. Say what you will about Marston and his fetish-based writing style, but Etta Candy. ETTA CANDY. Yeesh. So embarrassing! I can't even begin to process what's going on whenever we see dumb ol' Etta make the scene. Who's super power is being over-weight and bossy -- neither of which are bad things but played for jokes here, making them bad things. What the heck does that say about Marston?

Lynda Carter is a national treasure. I don't want to hear any gruff about her :)

I'm glad you printed it, FWIW. It's nice to see the Marston/ Peter work celebrated, if for no other reason than for being different from almost everything else in comics back then.

Kenn, but what a superhero, and what breasts!

I wasn't there almost 75 years ago when Wonder Woman first appeared, and the world, at least in those types of kinky sexual matters, was a lot more innocent. It was probably that WW worked on two levels, that which was "seen" by young readers, who would be more concentrating on the heroics and exotic villains, and those seen by older readers, who would understand the fetish elements at the root of many WW stories.

It's perhaps worth pointing out that the other artists and writers who have worked on Wonder Woman over the years have been too savvy to miss the massive amounts of howlingly obvious B&D baggage she started out with, and have always made an in-joke out of it. I forget where it is right now, but I've seen an internet gallery of every WW cover in which she's tied up or otherwise heavily restrained, and there are a LOT more such covers than any other superhero gets, right up to present day, or at least very close to it. Though now that she's been rebooted in the comics as an actual goddess only marginally weaker than Superman in a desperate attempt to make a movie about her plausible, presumably all that naughty forties stuff is officially verboten.

The other thing they've recently rebooted is of course her parentage. The Amazons have always been a society of immortal warrior women who have had nothing whatsoever to do with men for thousands of years (but they're NOT lesbians, honestly, even though in the earliest issues of the comic they explicitly admitted to tying each other up for fun), which makes it a wee bit problematic that our heroine is the only one of the whole lot who really is as young as she looks, owing to her mother Queen Hippolyta's surprisingly un-Amazonian maternal urges. How, exactly, does a woman get pregnant on an island with no men which is sealed off from the outside world by a magical force-field?

The answer is that, in the continuity which applied until very recently, she didn't. Instead, she made a clay model of a baby and prayed to Athena to animate it. Thus WW used to be technically an inanimate object, and specifically a clay golem (though she was in no other way even remotely Jewish). Every so often a very bad writer would remind readers of this by way of a magical curse that would start to cause her to revert to dirt, but the amount of explanation of ridiculous backstory facts everyone had forgotten about this entailed meant that it happened less than once per decade.

Happily, the comic now tells us as gospel that WW's mum went all non-Amazon and heterosexual one crazy night when she was seduced by Zeus. Thus WW is a demigoddess by birth, a goddess by promotion, and NOT Pinnochio's big sister after all. And this has ALWAYS been true because the Universe got rearranged. Or something. Which unfortunately means that the forthcoming movie will basically be Thor in drag, and nowhere near as silly as it might have been. And therefore nowhere near as much fun.