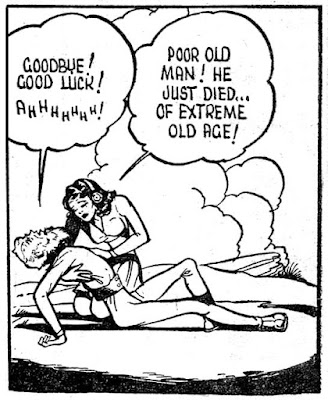 The Crusaders is a from a Canadian comics series, Three Aces Comics, which was combined later with Grand Slam Comics to create Grand Slam Three Aces. At some point they went to four color printing, but this earlier story is printed black line in Three Aces #3 (1945). It is a tale of relativity. People on the planet Kaznol, where the Crusaders have landed to repair their space ship, are aging faster than the Crusaders. It’s because time is whizzing by. According to a handy chart on page 9, we see that one day on Kaznol equals 24 years on Earth. Yikes.

As for the name, The Crusaders, there is a cross in the shield around “The” in the splash panel logo, In the very last panel a glowing cross is floating in space. Jihadists, take note. I am not promoting the Crusades. Other than those symbols, unless I missed something I don’t detect anything overtly Christian in the storyline. 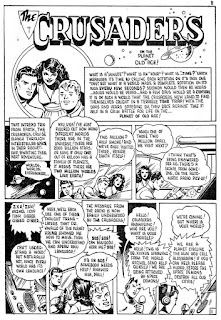 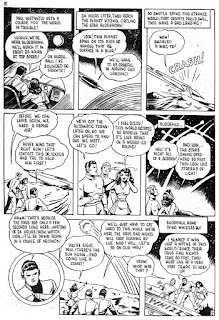 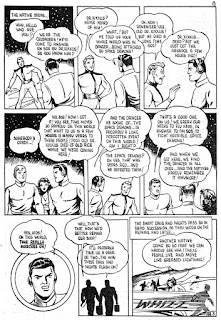 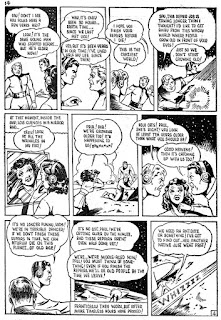 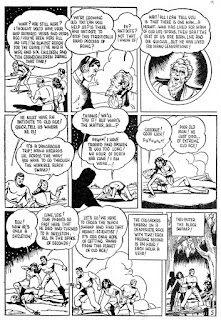 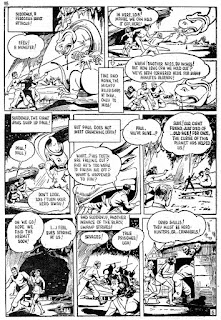 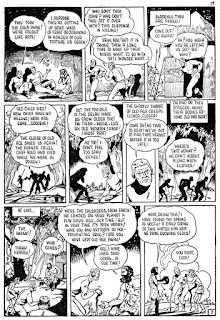 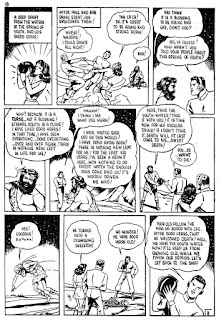 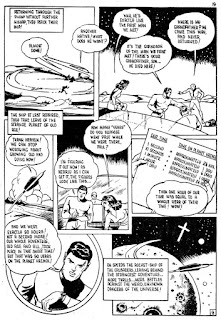 Coincidences happen. In April after I finished preparing the scans for this story, I saw and clipped this newspaper strip, Pardon My Planet, by Vic Lee. Copyright © 2015 Vic Lee.

Here is a color Crusaders story I showed in 2011. Just click on the thumbnail. 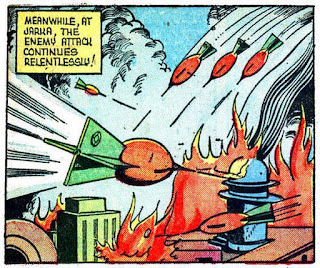 The "quick" and the dead. I love English language and its possibilities!
I'm usually one of the first to comment, guess it's because of the... Time Zone.
Maybe I'll take advantage and be the first to say: "What a wordy story!"... More than just wordy, it's encyclopedic. It seems to summarize every science fiction and fantasy's cliché, from Einstein to Fountain of youth.

I like the art, the dinosaur is lovely. I’m quite in a hurry now, so the link will have to wait. The cross in the last panel is quite annoying. Is it supposed to be a sort of Bat-Signal for the Crusaders? Phah! Makes me think of an old Sci-fi story I read: on a once highly civilized planet devastated by the effect of a Super Nova a scientific expedition from Earth (with a priest in the ship, you never know) finds proof that the exploding sun, that "demon star", was in truth the “holy star” seen on Earth and followed by the Magi to find the Bethlehem Child. Can’t remember the title, but a great little sarcastic gem it was. You’re right, the Crusades were mostly a big, bloody Gold Rush towards the East.

Daniel, eternal youth, hell...I'd like to be in my forties again. I peaked in that decade, and it's been downhill since.

J D, "Time Zone"...good one. You are right...you are about eight hours ahead of me, so you are looking at the latest post while many of us are still nose down in the pillow.

I think the story you may be referring to is "The Star" by Arthur C. Clarke. Read the synopsis in this Wikipedia entry and see if it is what you remember.

Precisely, that's the story, thanks. Another good one on the subject of faith and orthodoxy is "The way of Cross and Dragon" by George R. R. Martin... I used to read those stories as a kid.

Hi Pappy,
I don't remember any of the hermit's recriminations showing up in "Tuck Everlasting" but it's been quite a while since I read it so I might have forgotten. He certainly seems impulsive, deciding to die that day after living 5000 years!
The mechanics of the spring water don't seem to be worked out. Does drinking 1 cup reverse the 24 years' effects that have accumulated over 1 Earth day? Does drinking 1 quart reverse 96 year's effects from 4 Earth days? Did the hermit drink 13 gallons to reverse 5000 years' effects?
The crew didn't seem too concerned with burying the man who stopped to talk with them. Perhaps the custom of burying the dead becomes passe in the future? The crew didn't make any effort to console his grandson. "Your grandad? That's his bones over there..."
I'm pretty sure you're right about "The Star". It won the Hugo award in 1956.
Thanks,
Darci

Darci, you are usually the person with answers, not questions! I assume your questions are rhetorical because I have no answers.

I also thought "...that's his bones over there" was callous, but I assumed it was the writer's way of beating us over the head with the point of the story.

Thanks to you for writing.

Its tha Lutenant Marvels! In Canadia! Is this Pete Costanza or just peeps from Canadia imit8ing CC Beck yo? I mean, "eh?"

You know what, Alicia? Mrs Pappy was in Toronto last weekend with Pappy Jr and his kids, and I asked if anyone said, "eh"! When we visited her relatives many years ago we heard it all the time, eh.

She did say she heard a guy say "aboat," for about which assured her she was truly north of the border.

As for the C C Beck/Pete Costanza imitations, the Captain Marvel comics were popular in Canada before import restrictions came about in World War II. I think when it came time to produce a local product the editors told the artists, "Draw it so it looks aboat like that Captain Marvel, eh?"

Hi Pappy,
There are not many indexed Crusaders stories at the GCD, but Grand Slam Comics #15's story is credited to Les Gilpin and Ed Furness. Sadly, there's not much more information about them at http://canadiancomicsdatabase.wikia.com but they do add that Ed Furness also co-created Freelance and Commander Steel.
Thanks!