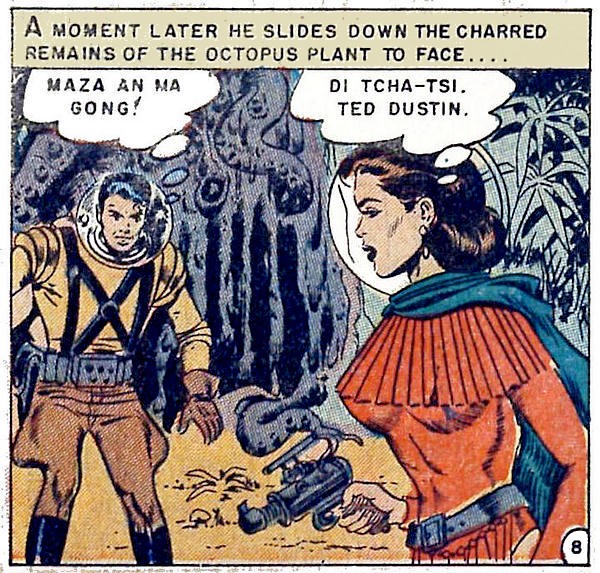 Maza of the Moon, by Otis Adelbert Kline, is the source for Rocket to the Moon, an Avon one-shot comic from 1951. Kline, whose interplanetary novels emulated Edgar Rice Burroughs, was a literary agent in addition to author. Maza was published as a four-part serial in Argosy in 1929, then as a book in 1930.

Kline died in 1946, so he did not see later reprints of his works. Ace Books did a series of them in the early sixties, with attractive covers by the likes of Roy Krenkel and as you can see by the cover of Maza, Frank Frazetta 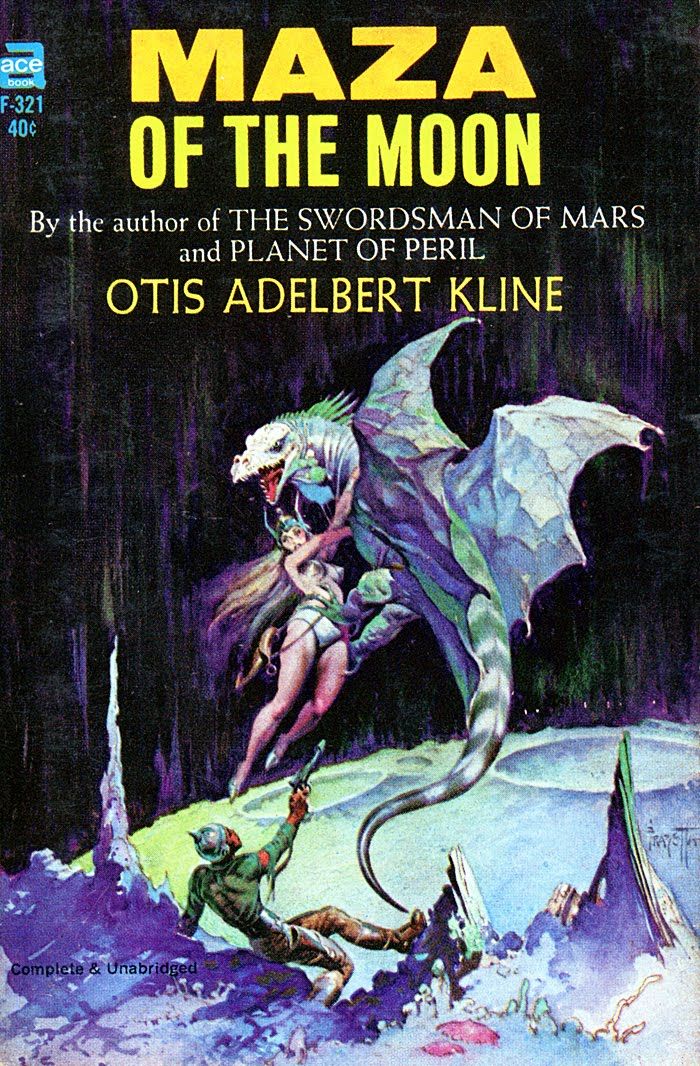 Reading Rocket to the Moon has the genre clichés: earthman on another planet, swordplay, and a beautiful princess...always. The earthman always wins the fight and always gets the princess. Hurrah for earthguys! It was a formula that worked in its day, and still has a certain nostalgic charm.

Unfortunately, comic book readers would not associate Kline’s name with this version, because it is left uncredited. You may remember another one-shot Avon adaptation I showed a few months ago, An Earthman on Venus, which left writer Ralph Milne Farley’s name off the comic book. The artwork for Rocket to the Moon is credited to Joe Orlando. The scans are from the 1964 IW Super Comics reprint, Strange Planets #12. The cover scan, which I found on the Heritage Auctions site, is from the original 1951 publication. 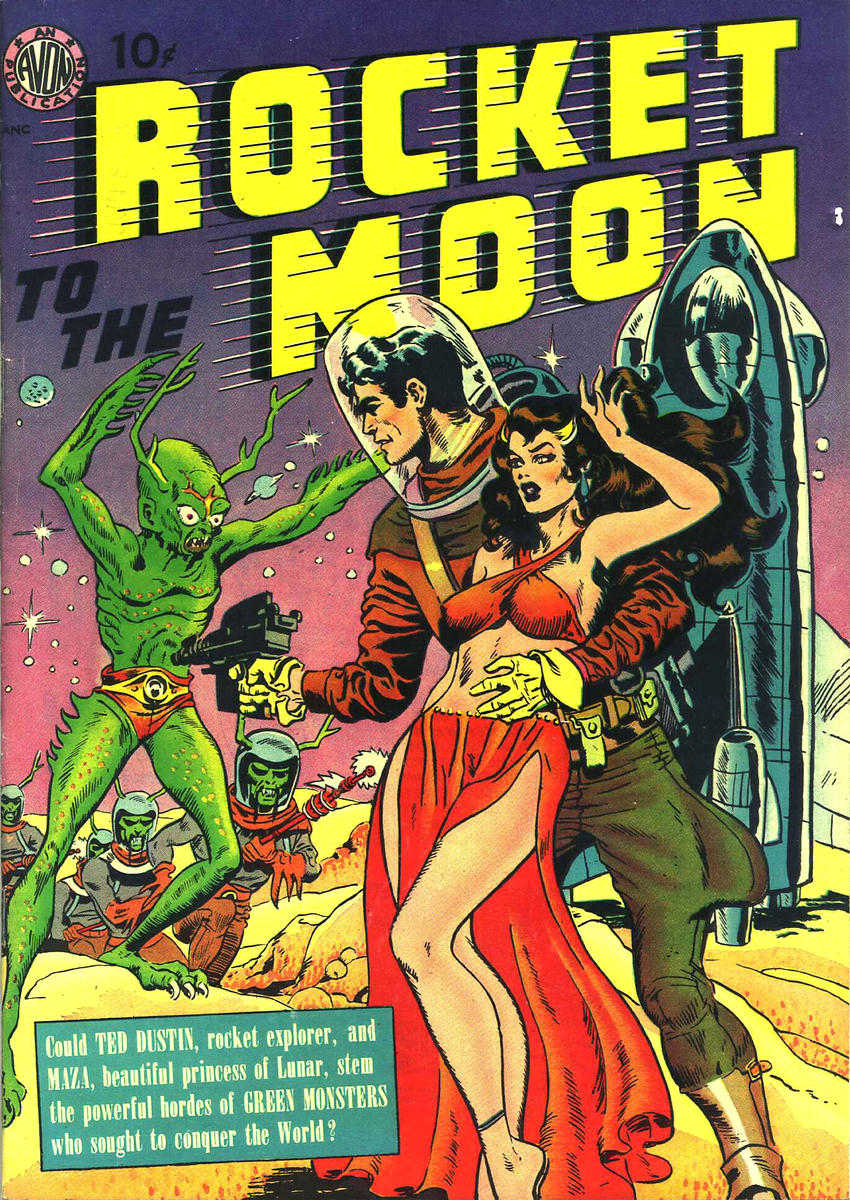 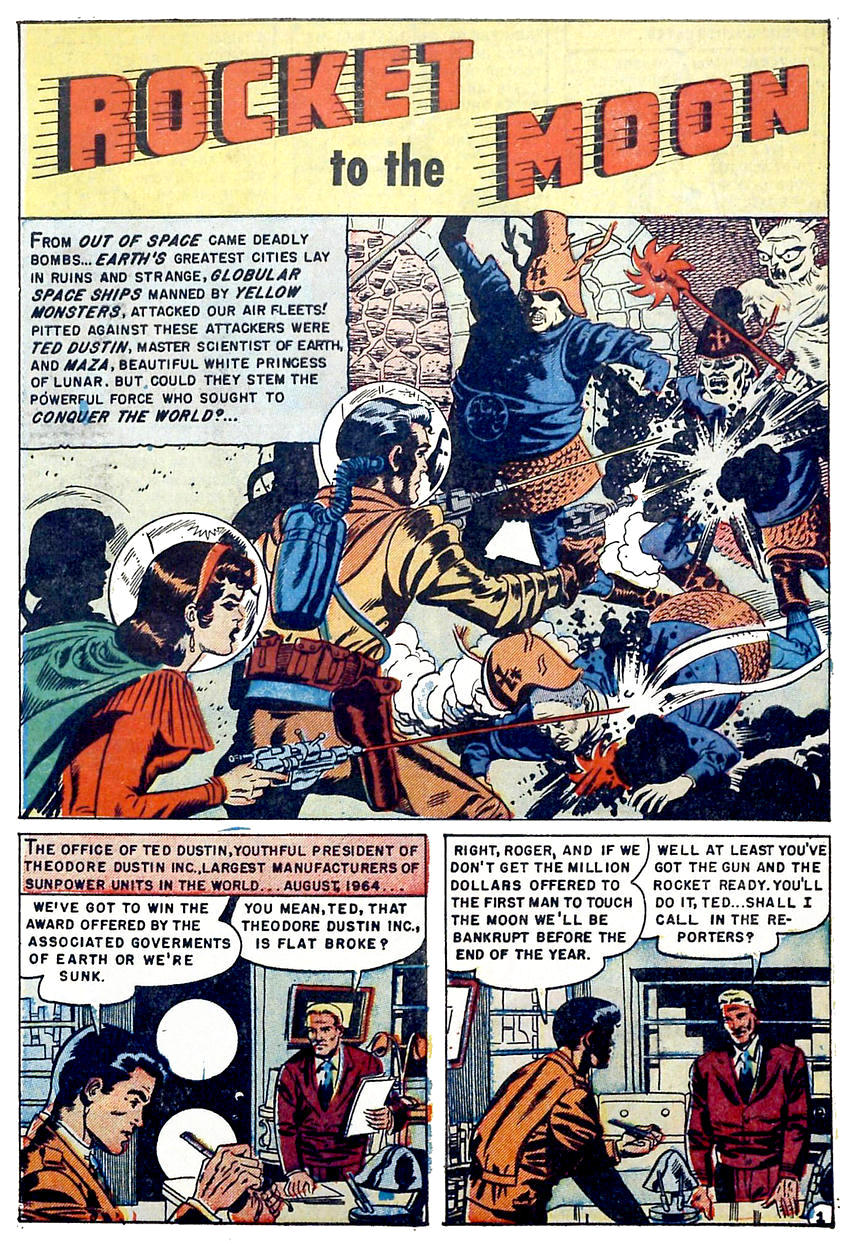 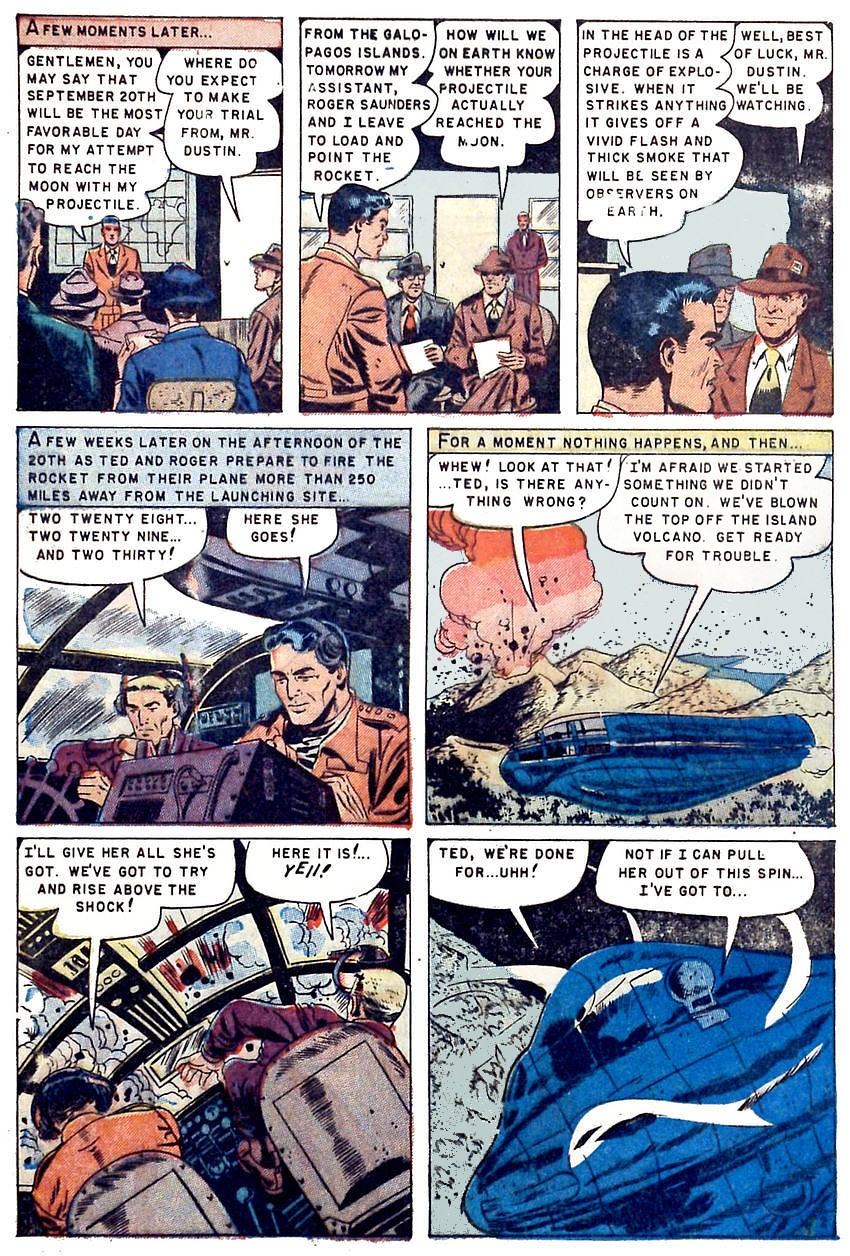 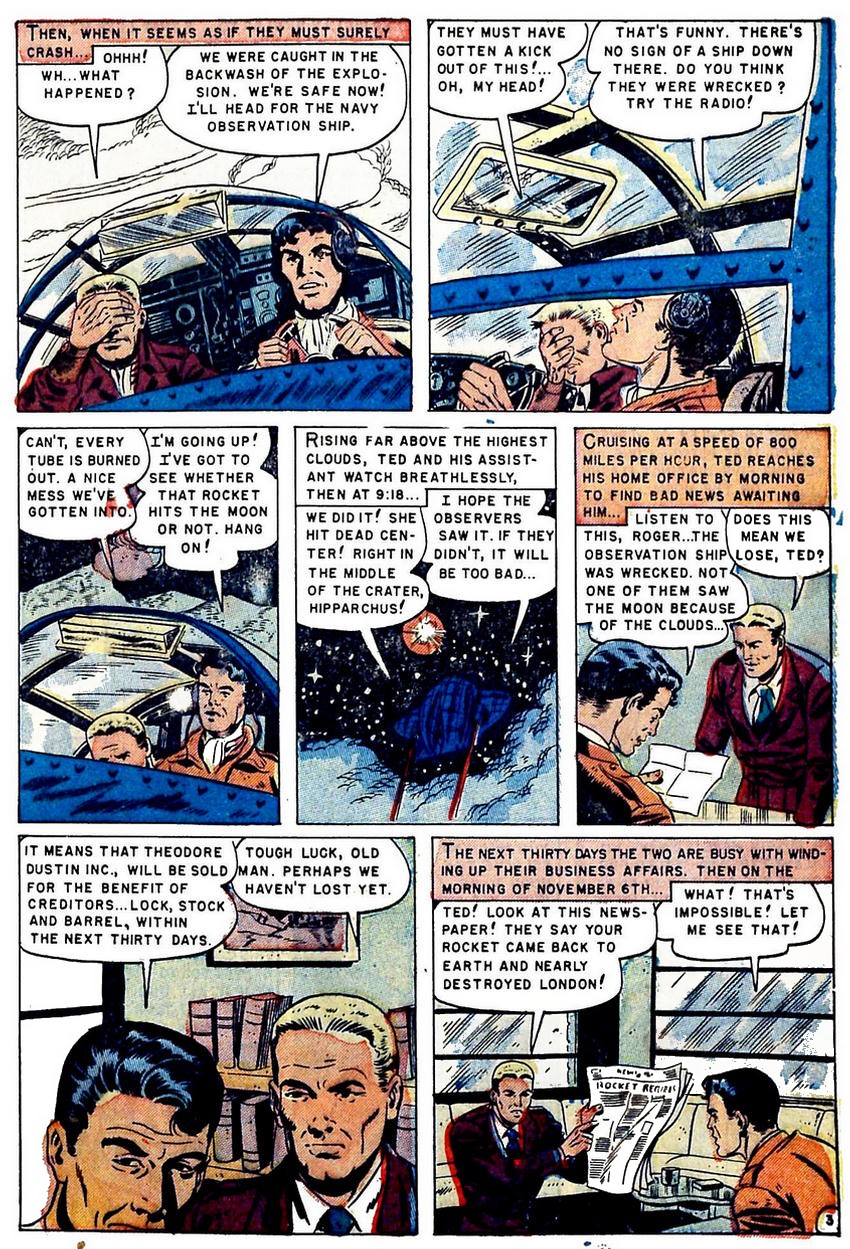 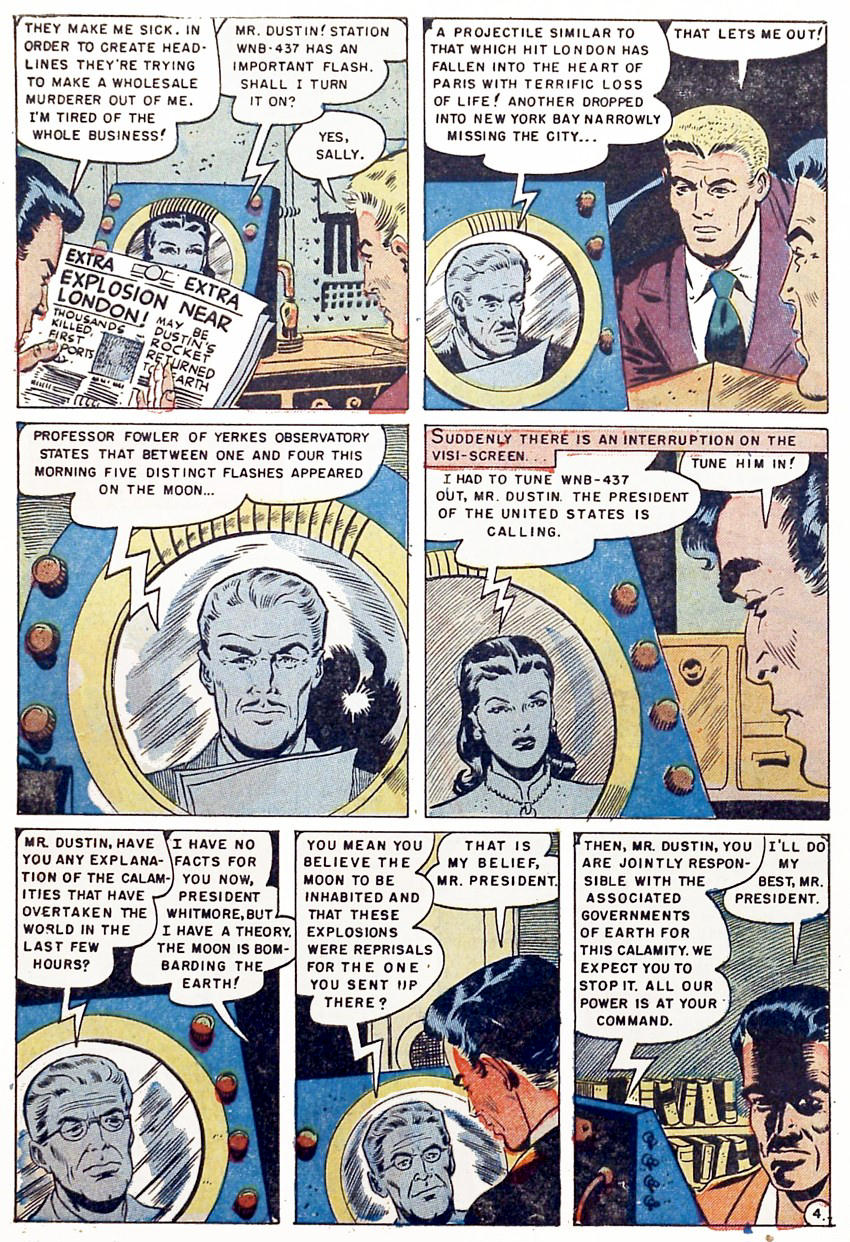 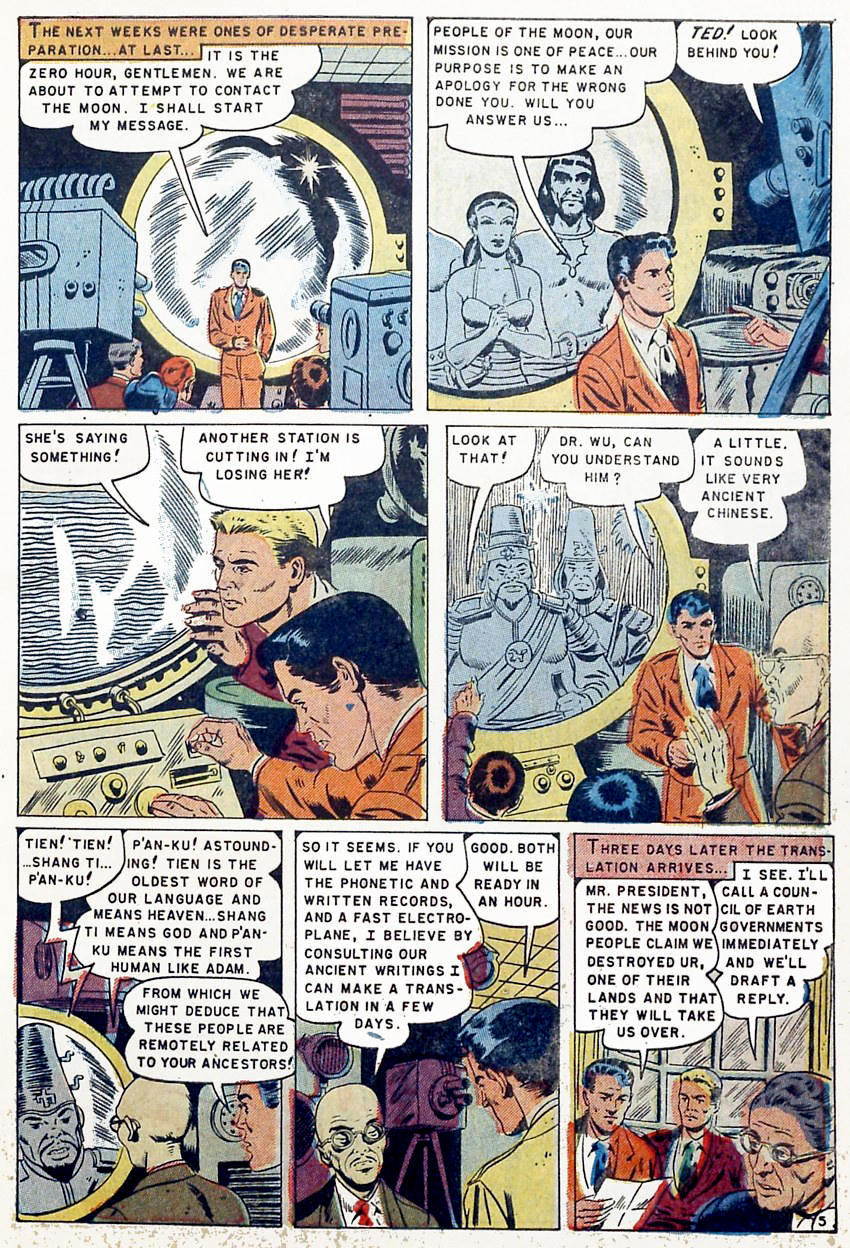 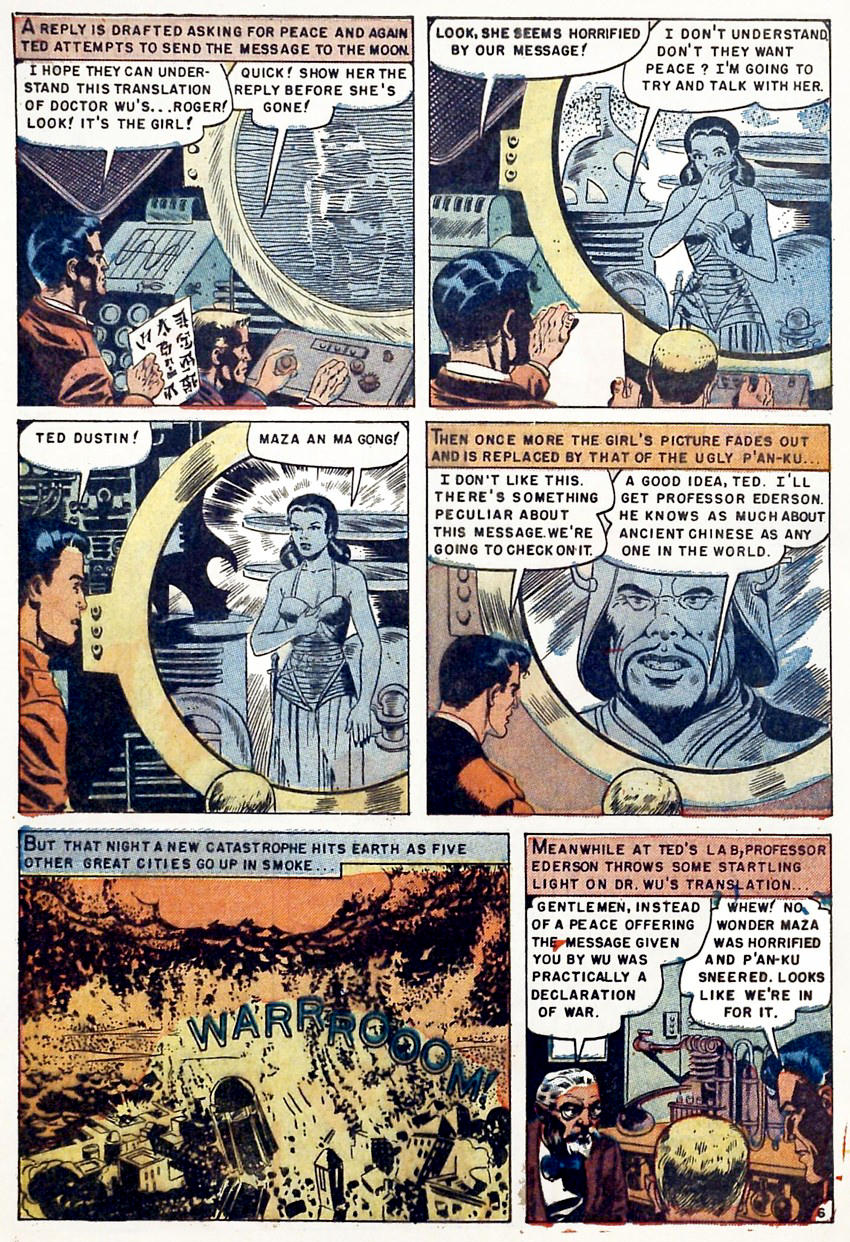 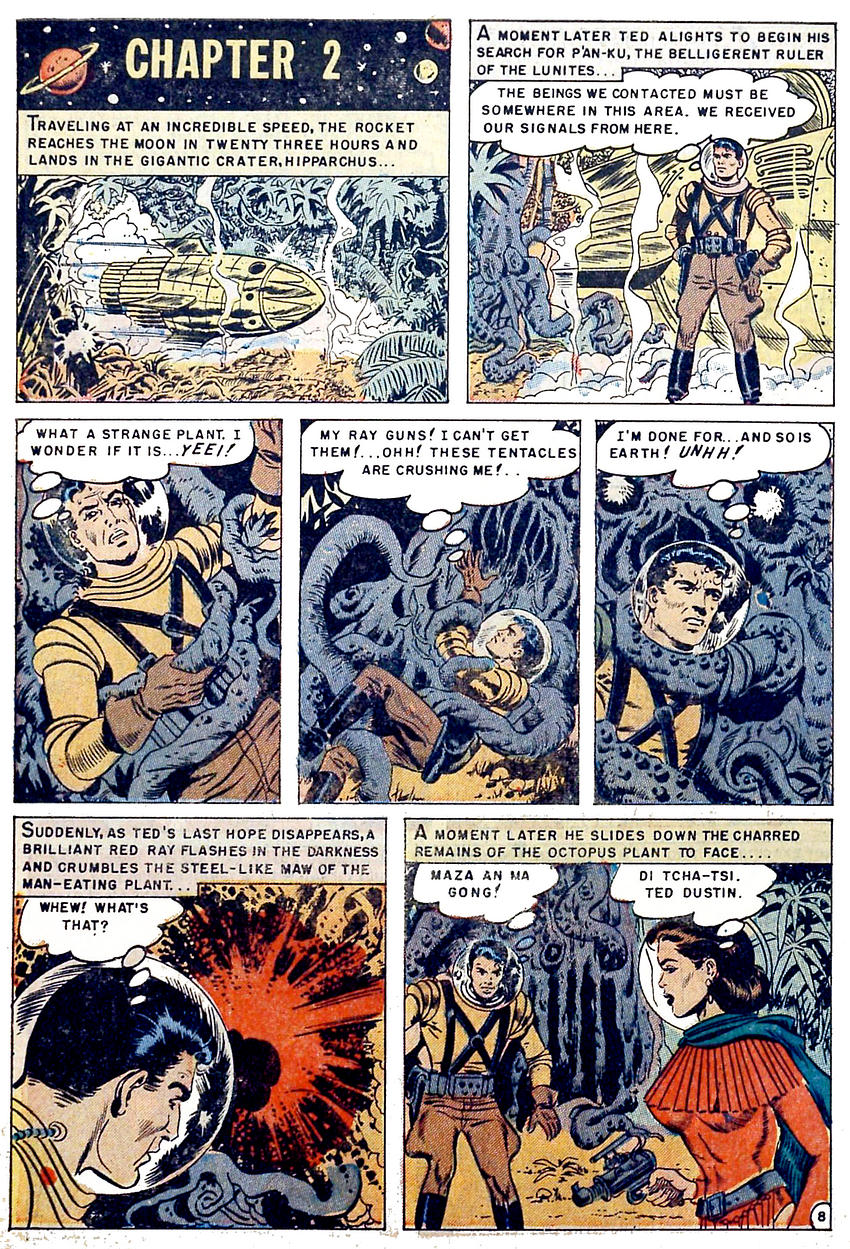 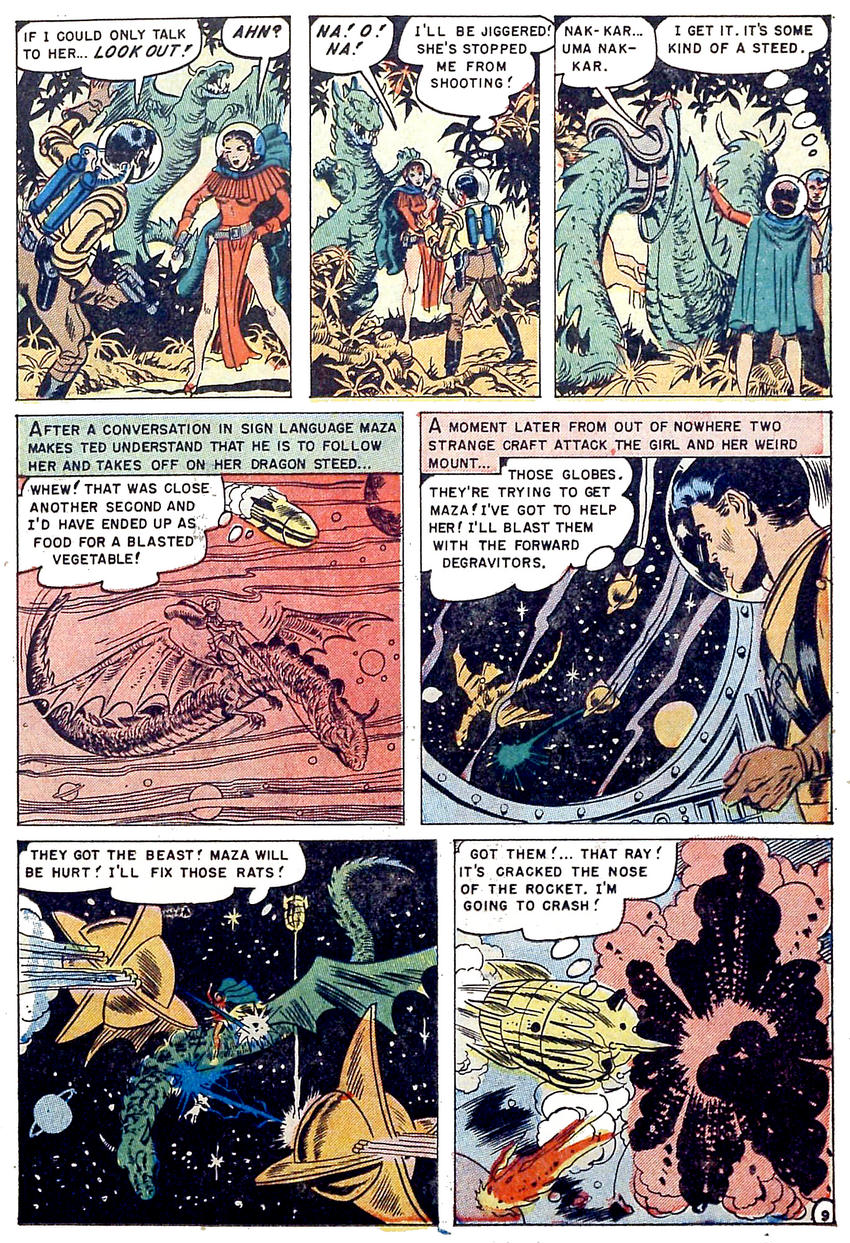 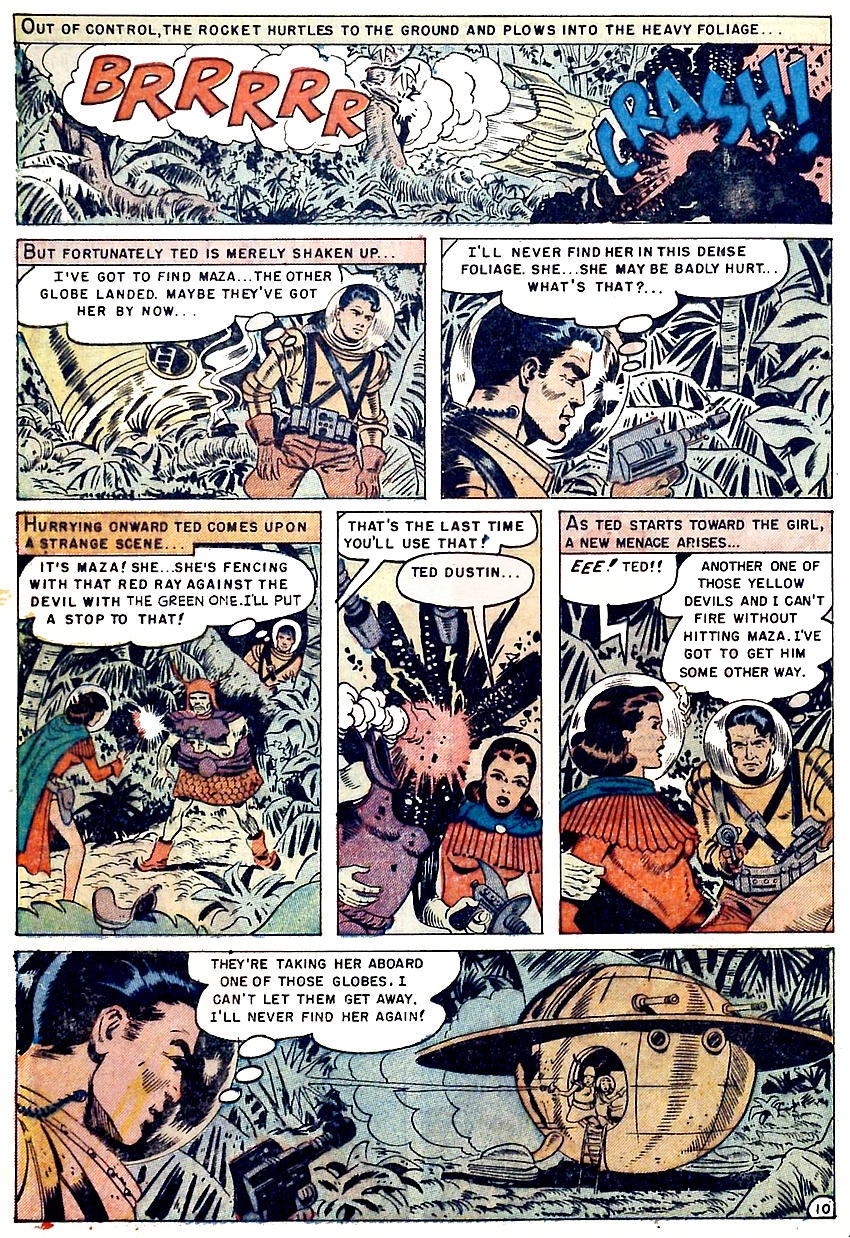 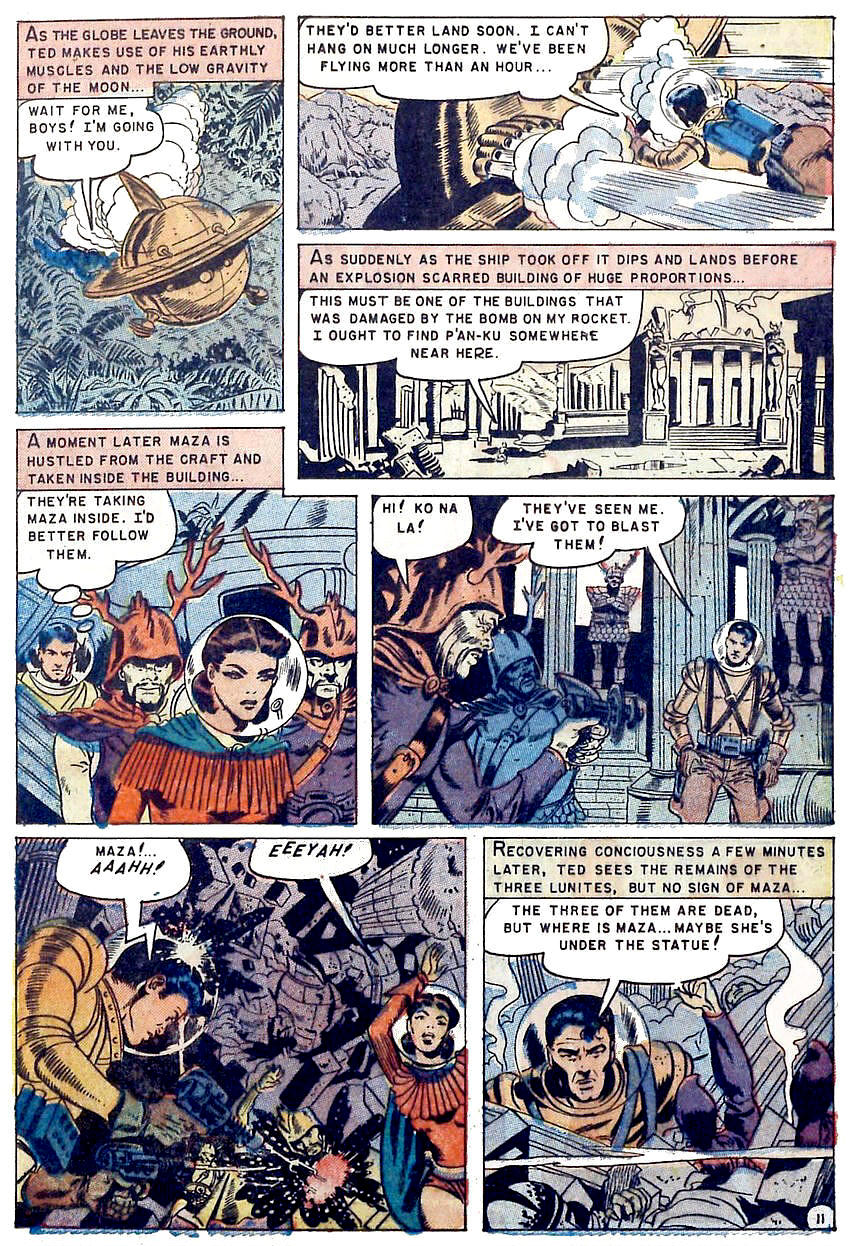 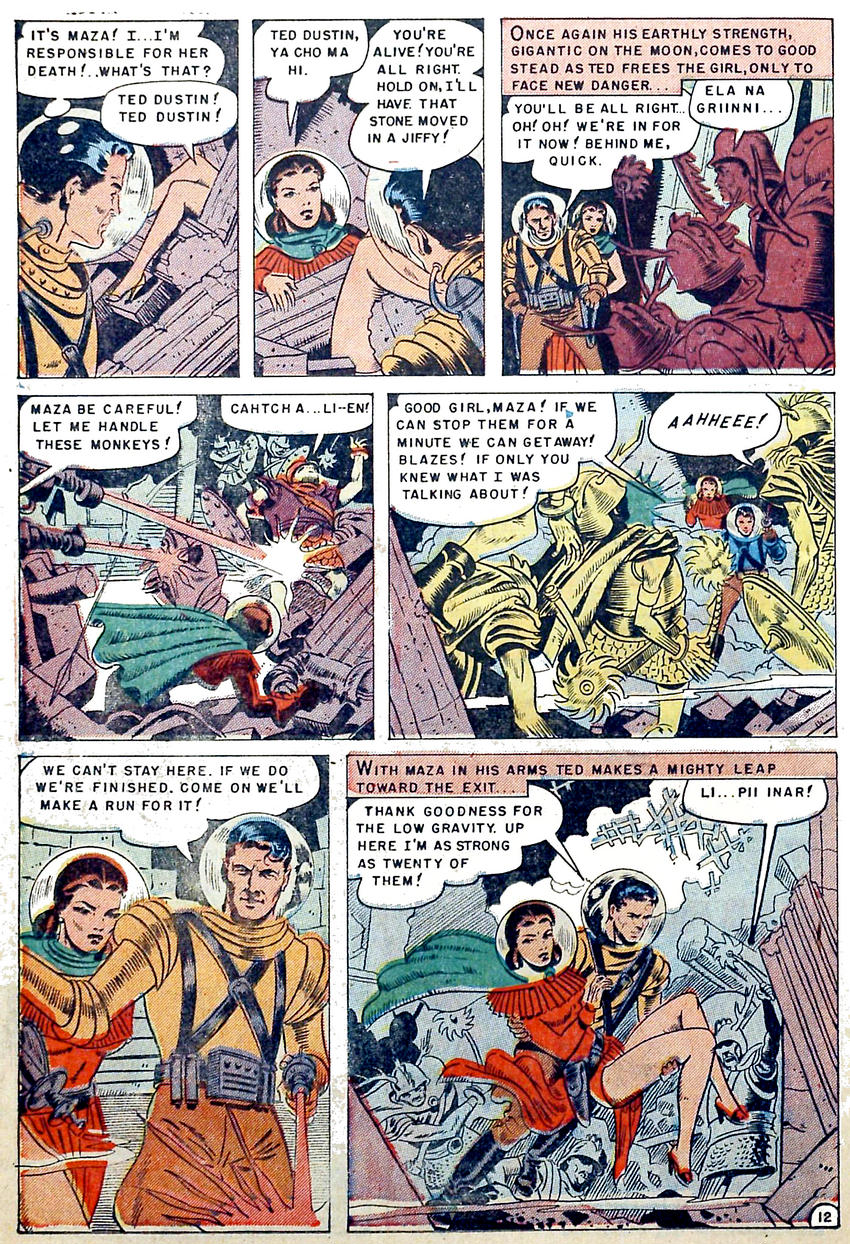 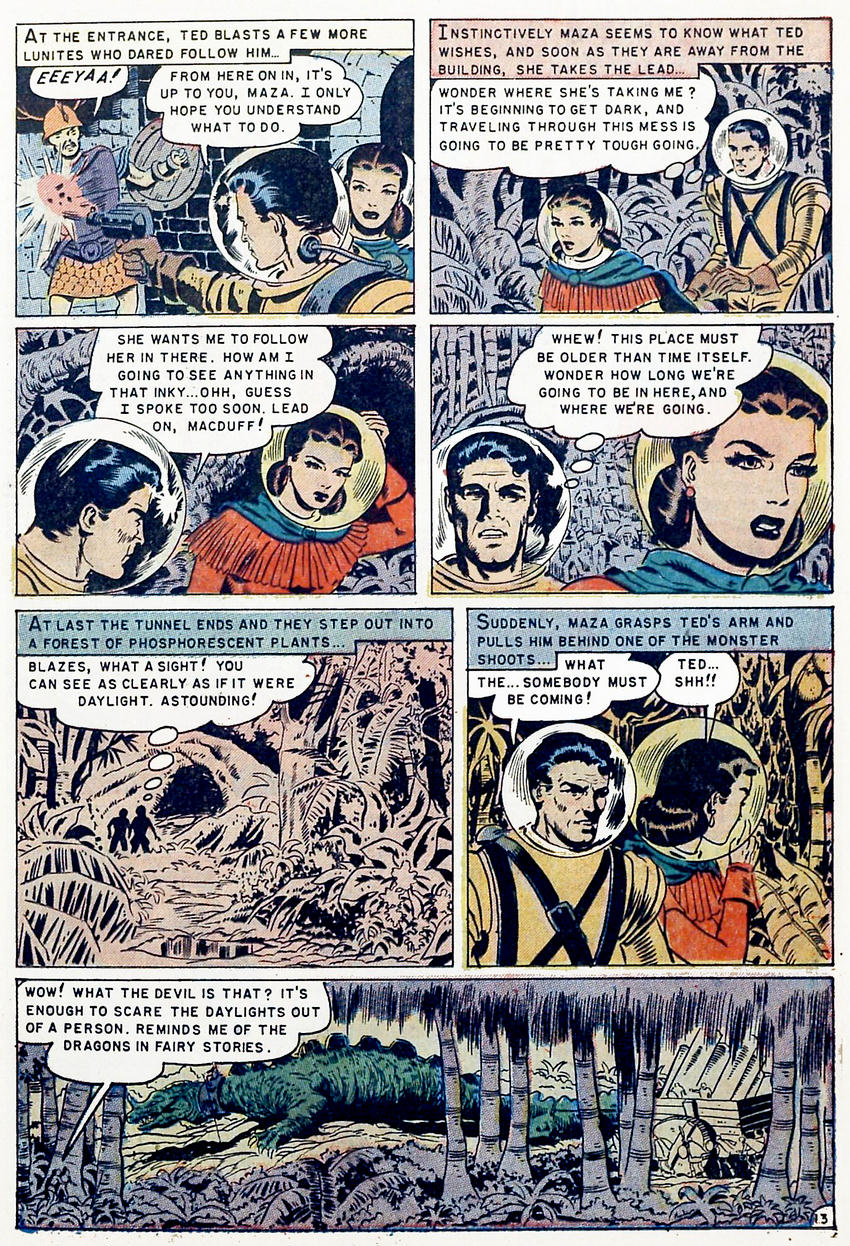 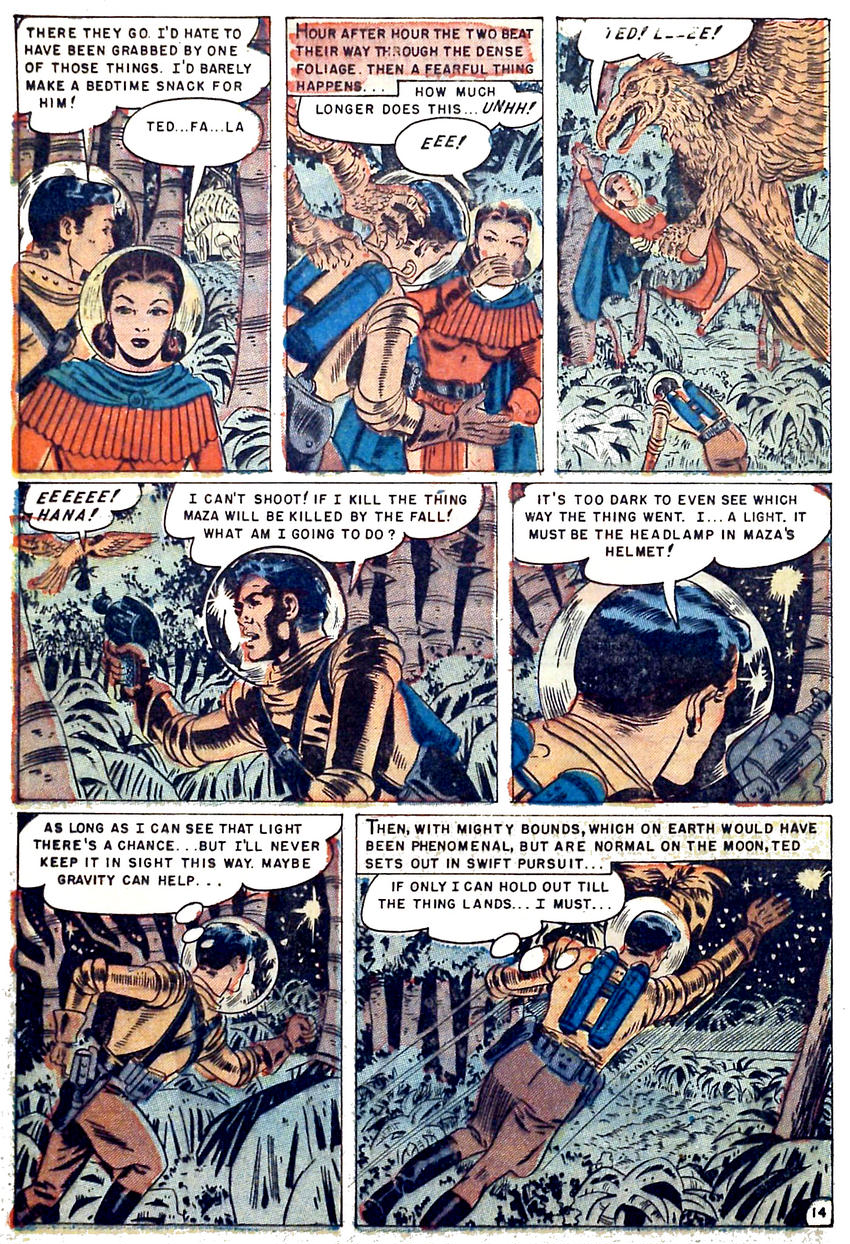 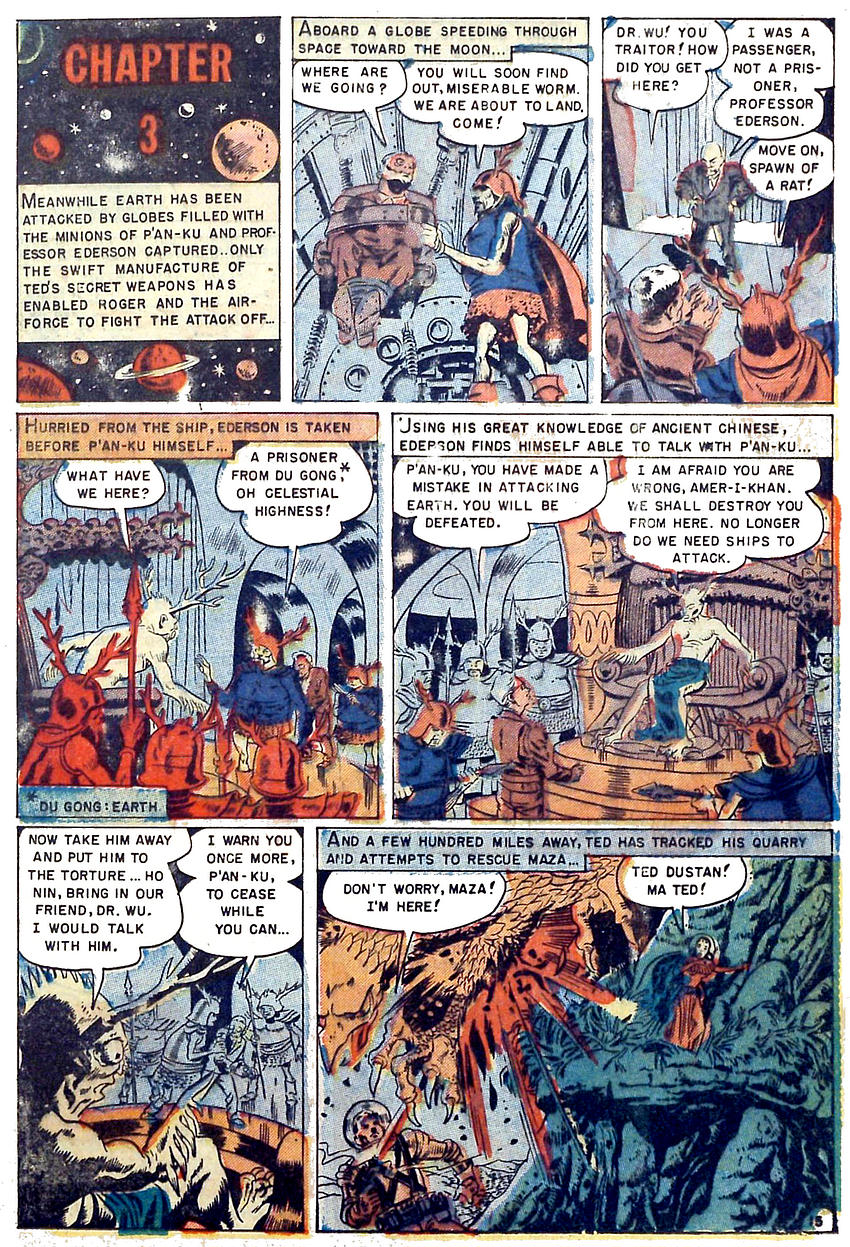 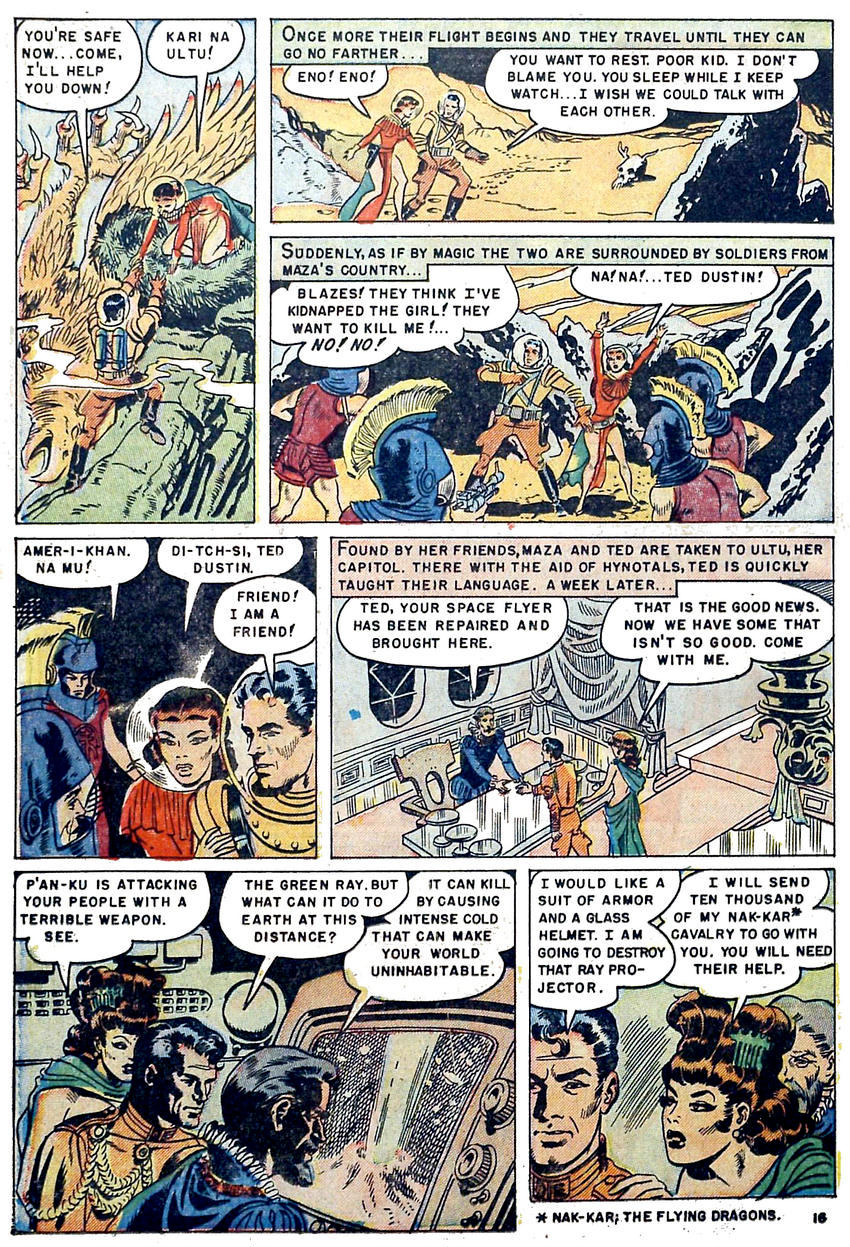 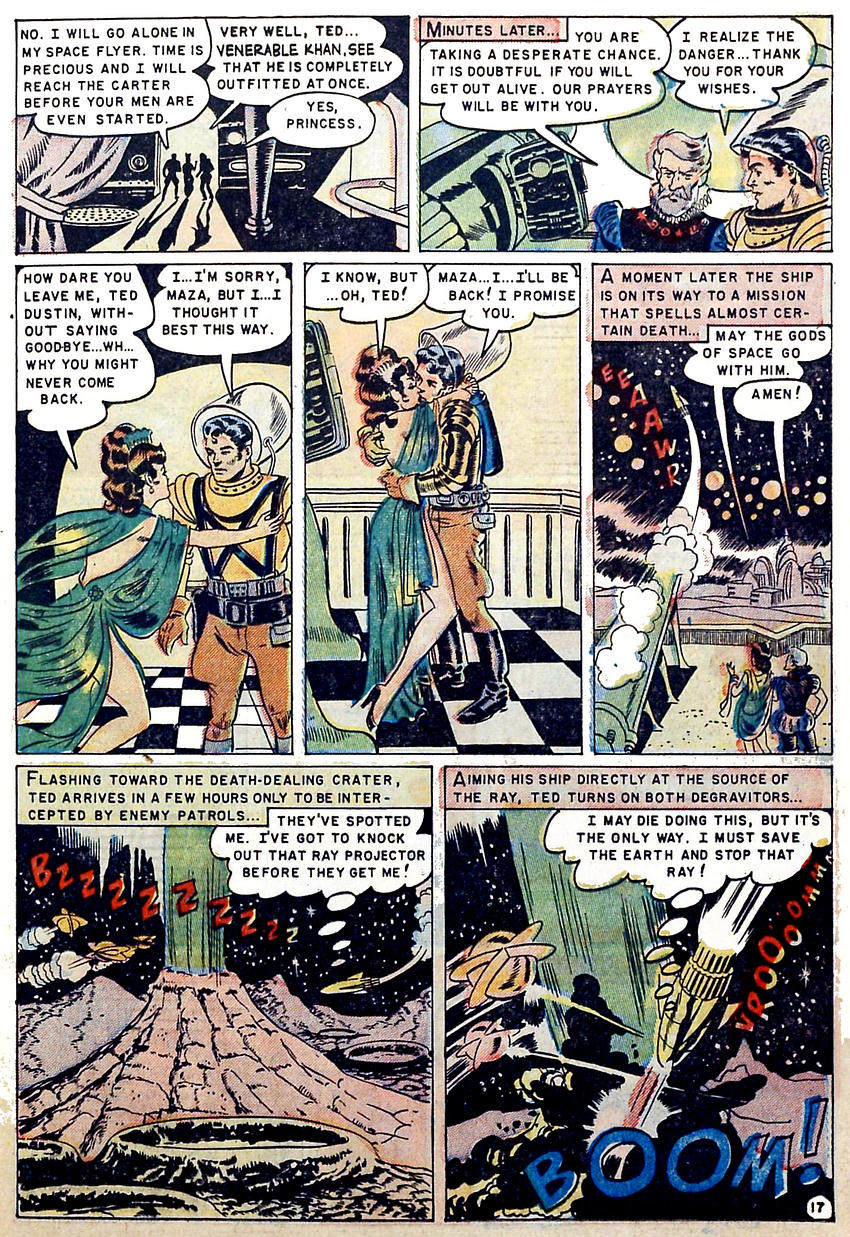 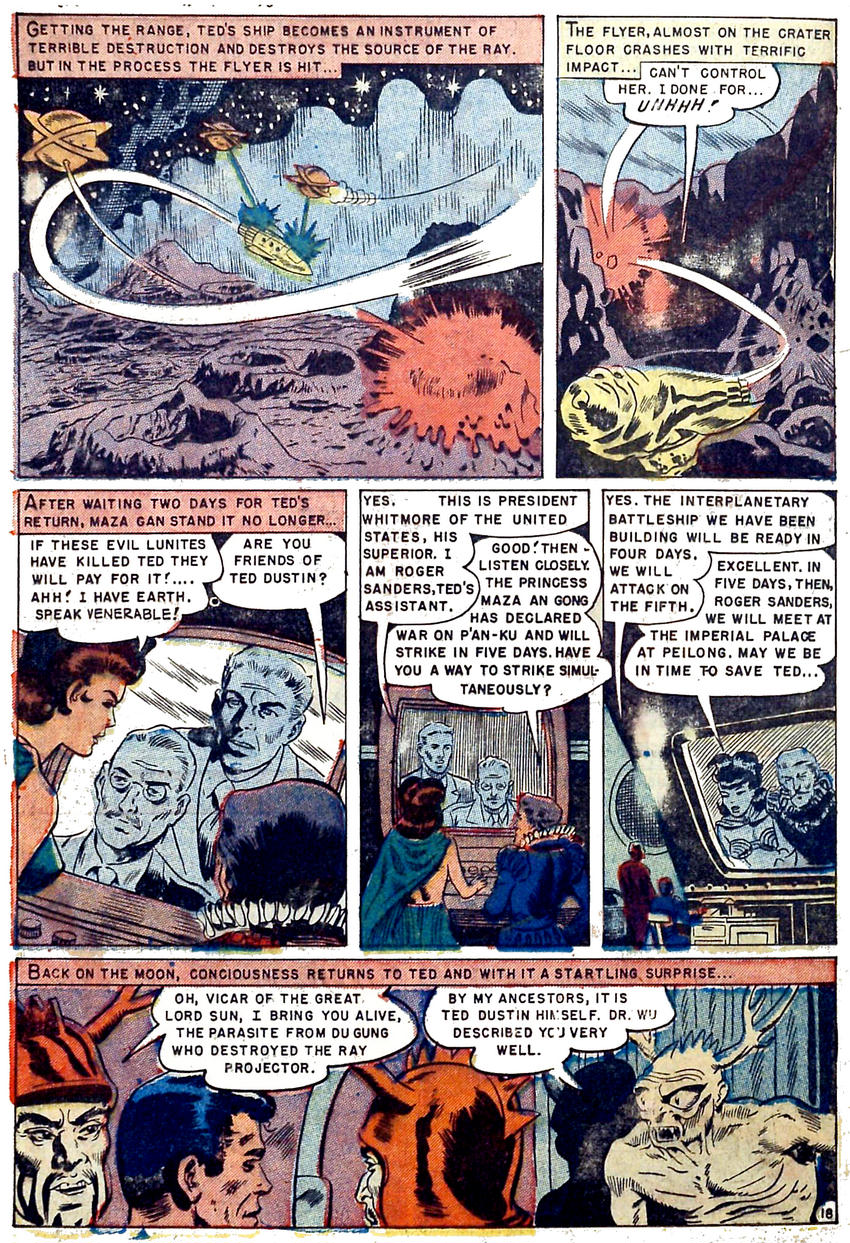 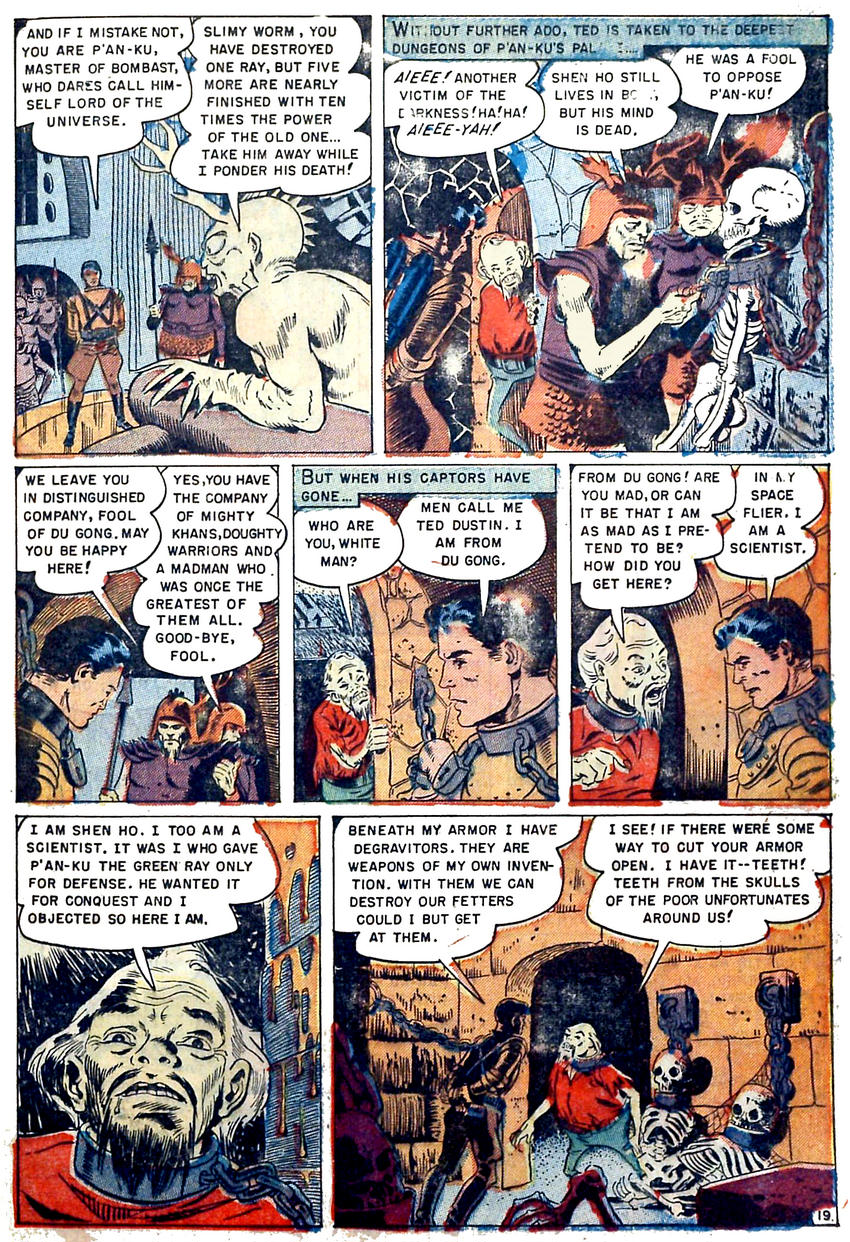 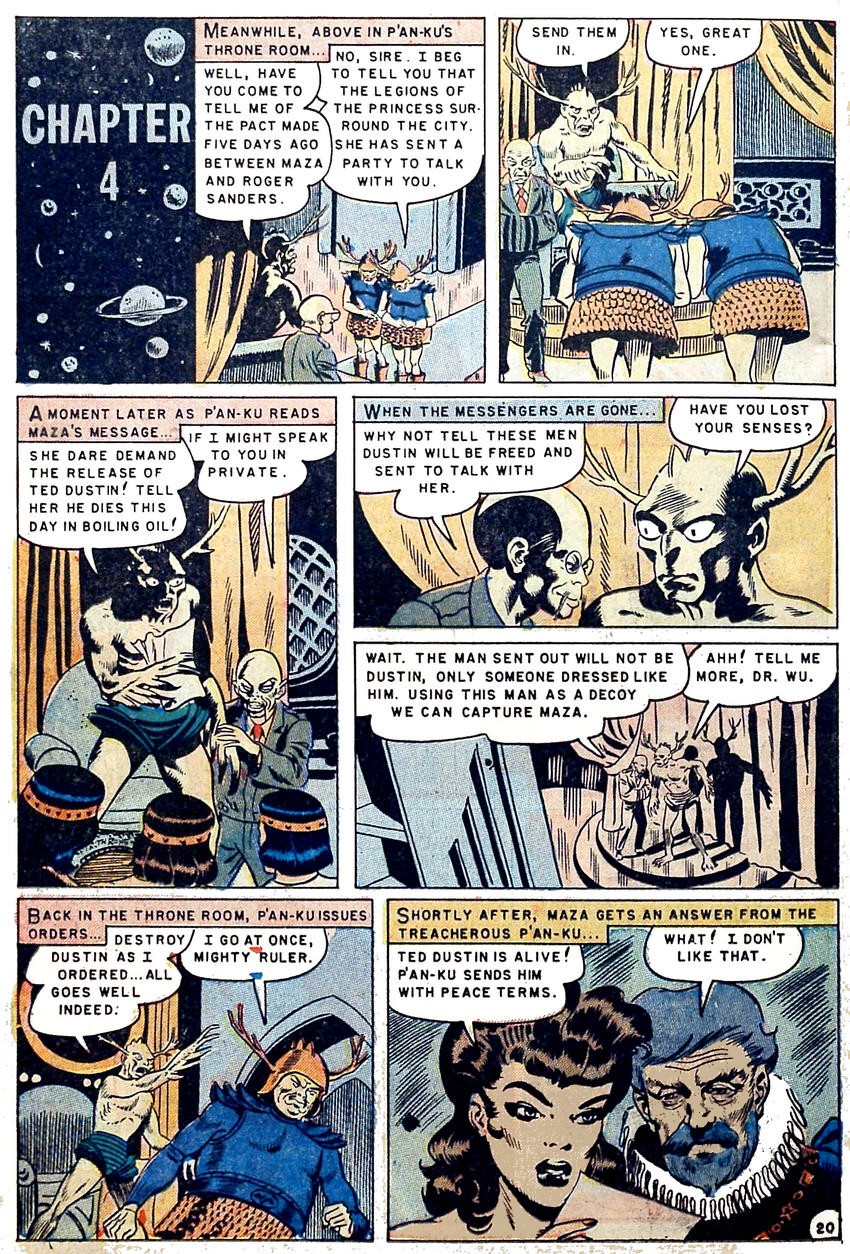 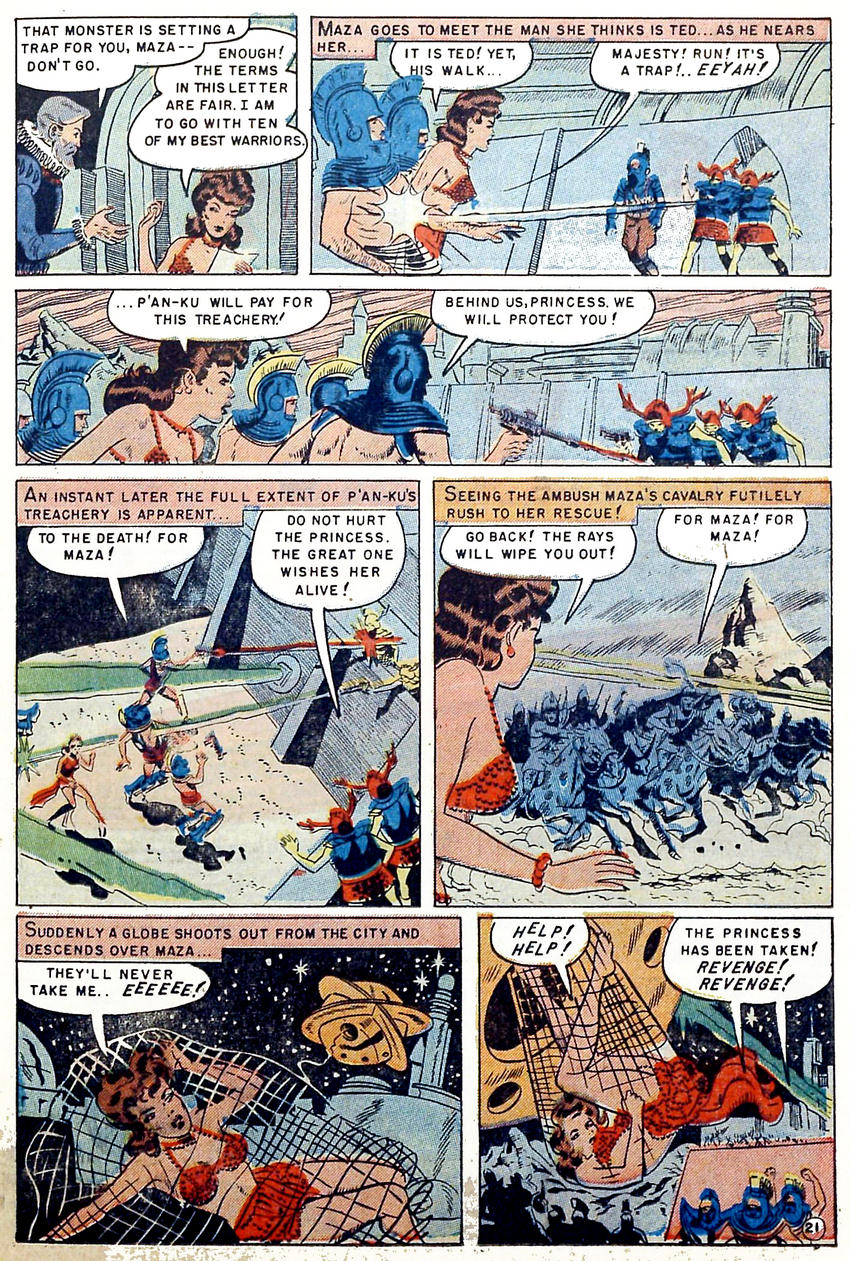 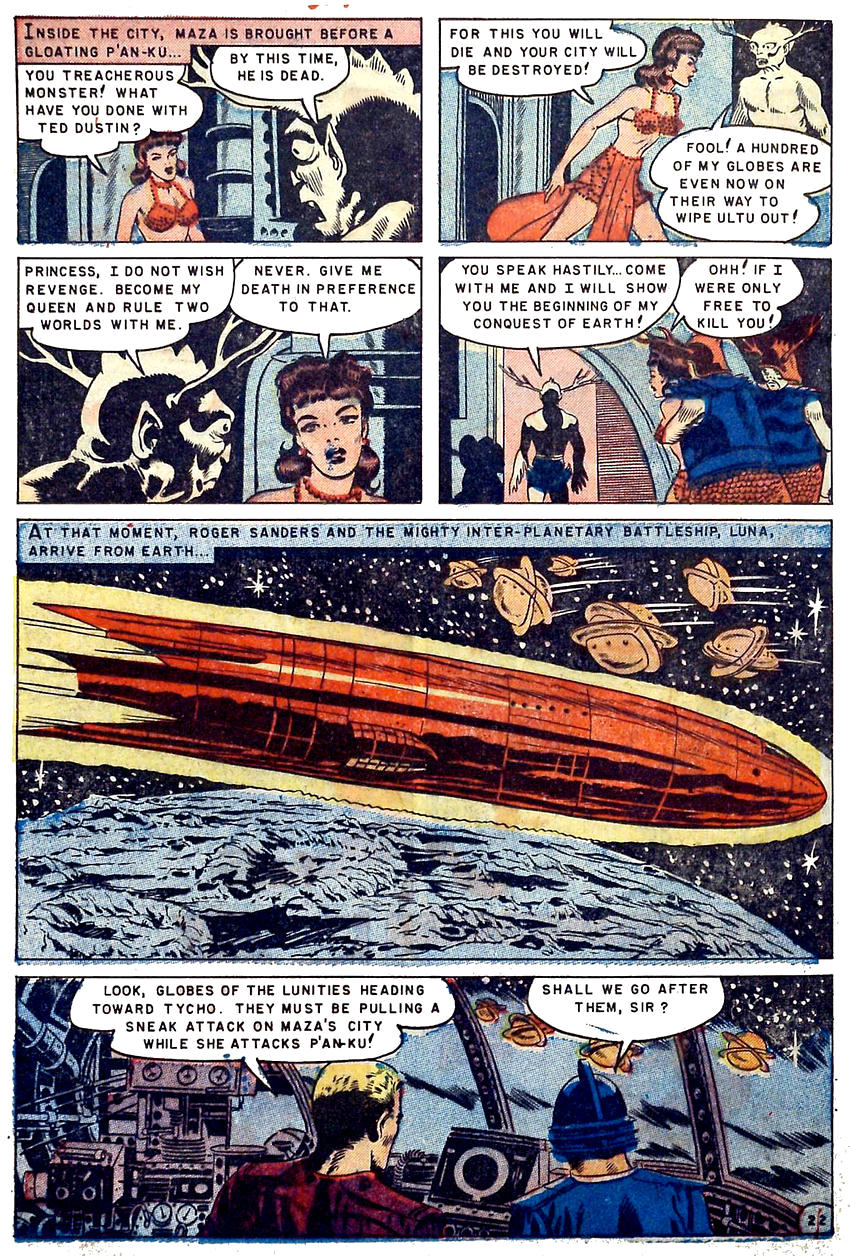 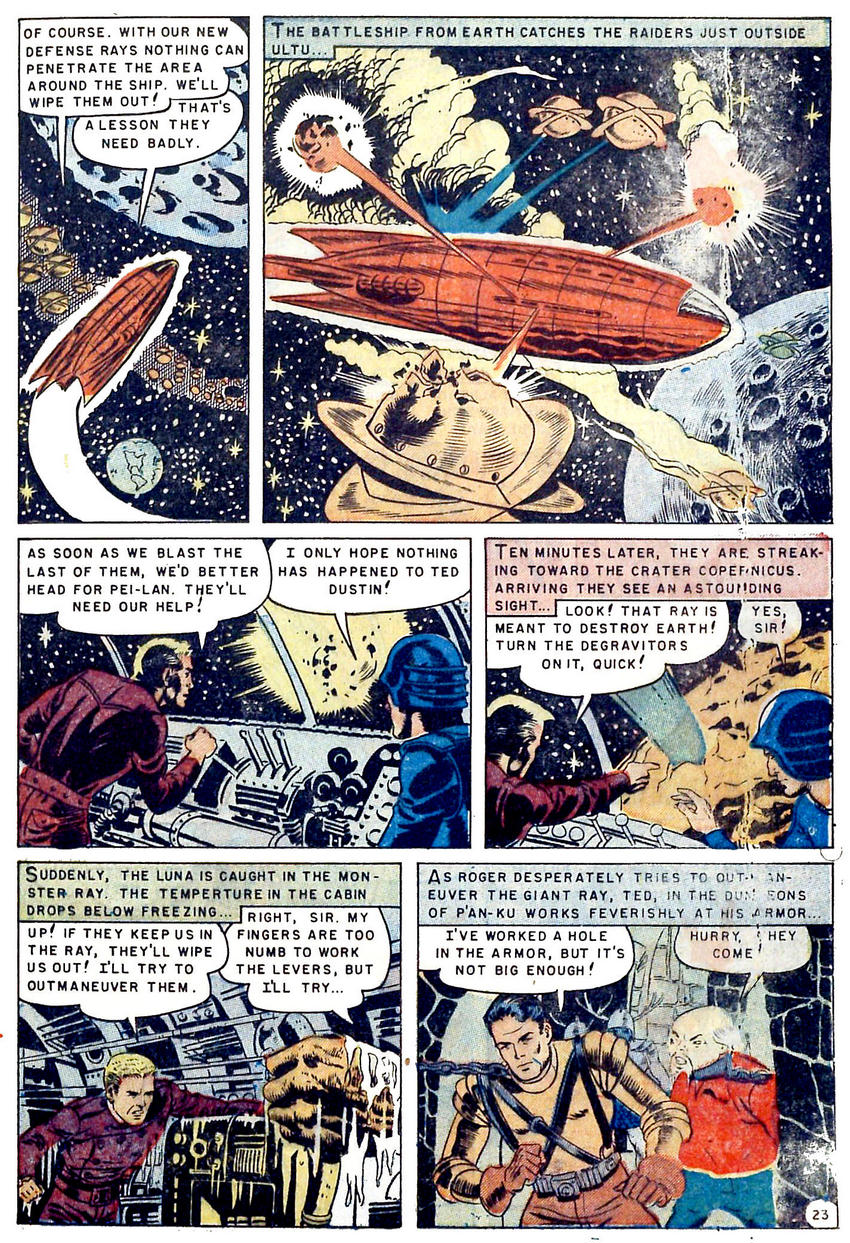 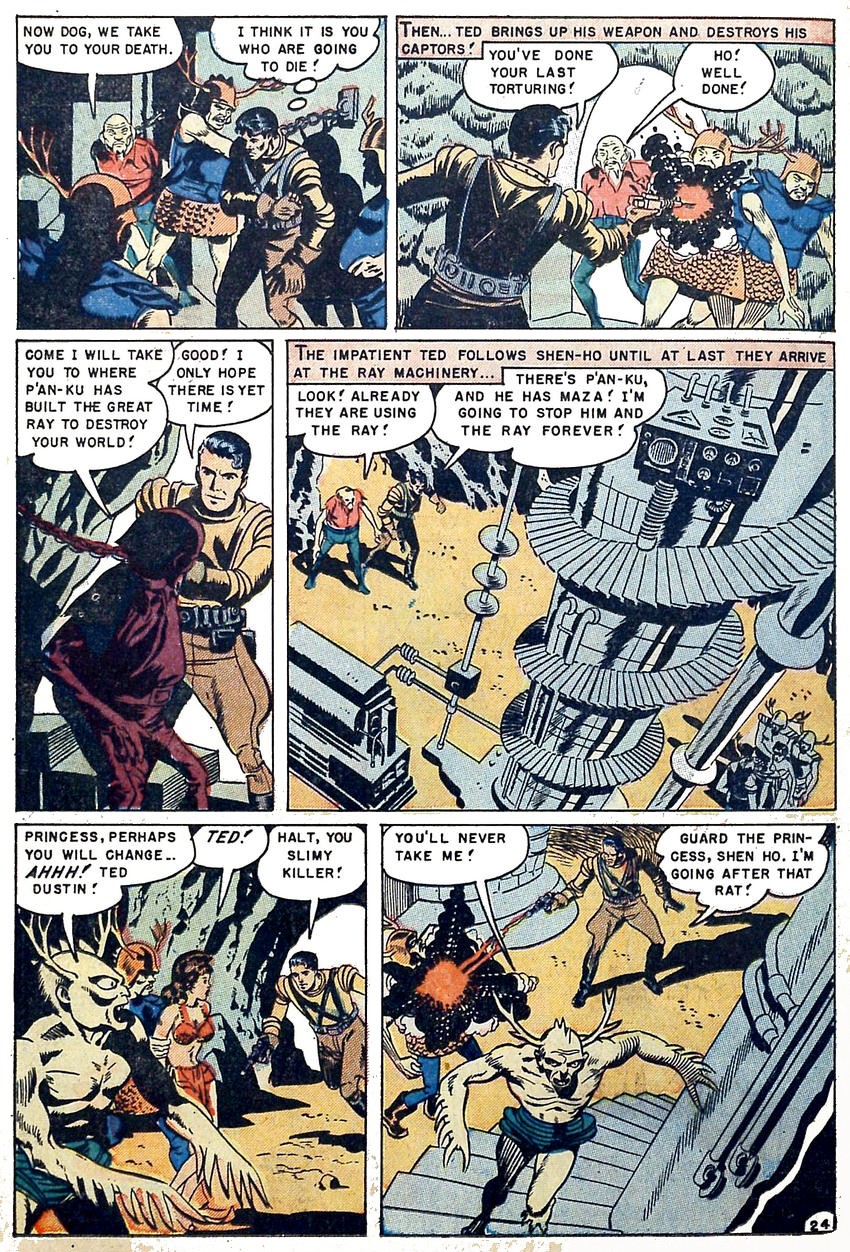 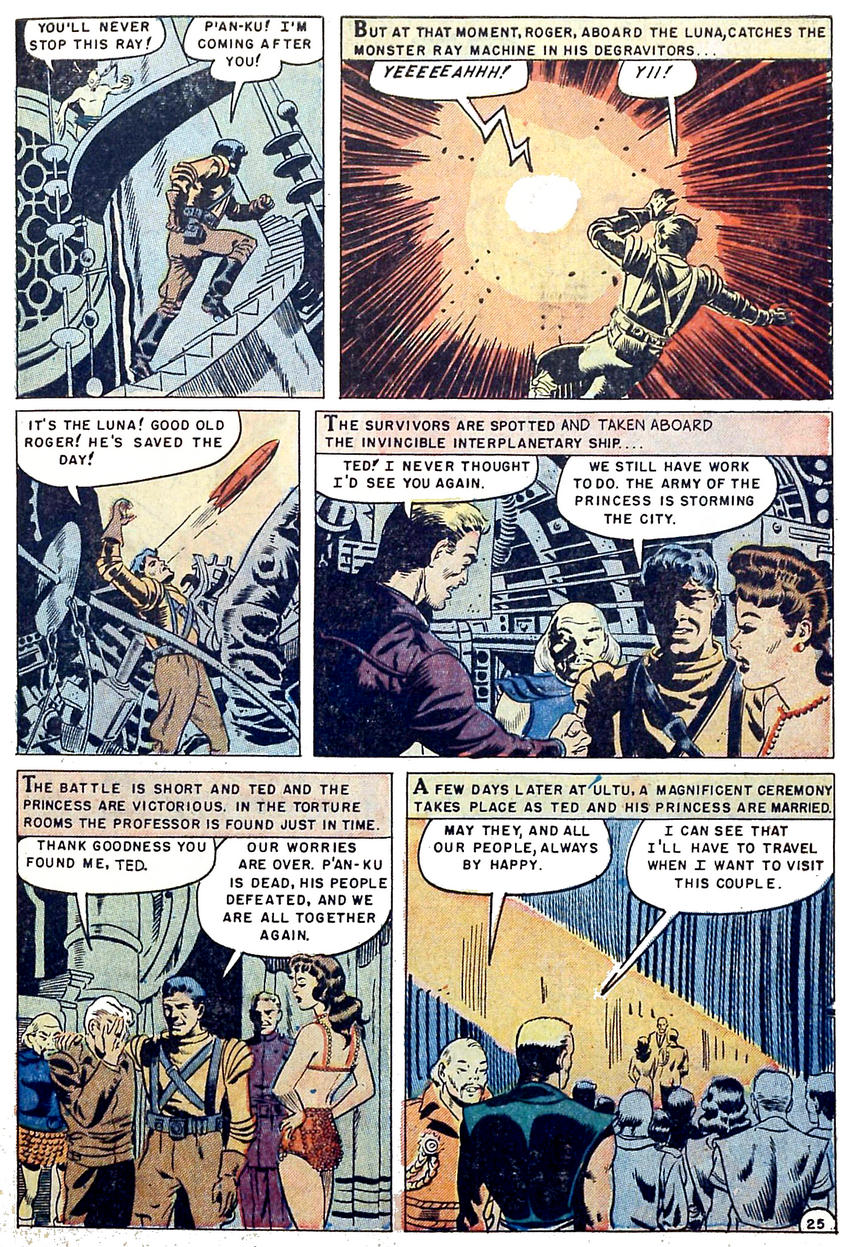 That was entertaining, though mildly racist. The story was as much Alex Raymond as ERB, although, at one point, the word "crater" is spelled "carter." Freudian slip?

Great story. If I remember well, Otis Kline and Burroughs were engaged in a ruthless "war" with their sci-fi stories in a "John Carter" vein. And Kline also did "Tam, son of the Tiger"... But Kline was forced to sell those stories to pulp mags (Weird Tales? I don't recall), while Burroughs at that time had his own publishing company, so he could turn every story into a profit. Burroughs was not only a great writer, but a cunning businessman.

Hurrah for heartguys, Hurrah for alien's legs (and Orlando's art).

Always thought Kline a good writer, and he's best with these science romances. You say Joe Orlando is credited with the art, but it sure looks like Wally Wood did a lot of the heavy lifting.

J D, I think that "war" between Kline and Burroughs was fiction. I don't think ERB had much to worry about from authors who copied him.

I read somewhere that Edgar Rice Burroughs is one of the very authors to make a success out of publishing his own work. In that era it was unusual for a writer to set up his own publishing company. Nowadays there are many self-published works, but to the extent Burroughs did his own publishing, probably still rare.

Ryan, I missed that spelling mistake...since it was lettered by Jimmy Wroten and his mechanical Leroy lettering, probably just a mistake, but as you say, looks Freudian.

Matthew, I know Wood and Orlando had a working relationship, and I believe Wood had something to do with this story. What exactly, I don't know.

The Grand Comics Database credits Orlando with the artwork except for chapter 1, which they credit to Charles Nicholas with a question mark, pencils and inks.

They also credit the script to Walter B. Gibson, prolific writer who did the greater bulk of Shadow pulp novels.