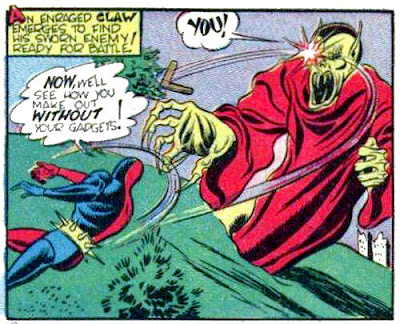 This is a Jack Cole masterpiece of style, which could veer from the placid and bucolic (page 3) to the Seventh Circle of Hell, represented by the depictions of the Claw’s realm on the next two pages. Cole, who was at heart a funny-pictures kind of cartoonist, used that comic exaggeration to great effect, even when it concerned more “serious” subject matter. (I use the word “serious” guardedly...none of this mayhem can be taken seriously.)

Different artists working for the Lev Gleason company drew and wrote the Claw stories for the length of his villainous career within the pages of Silver Streak and later Daredevil Comics. But, in my opinion, none of the artists had the flair for the cartoon-grotesque of such a comic book creation as did Cole. When he applied his considerable creativity to any feature, no one could top him. 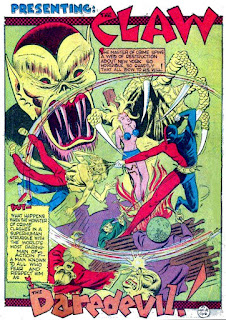 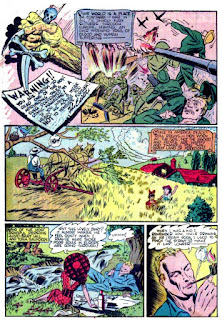 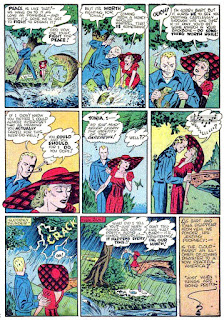 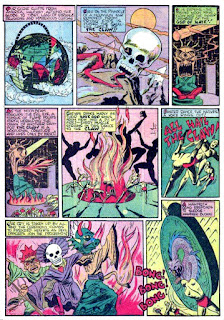 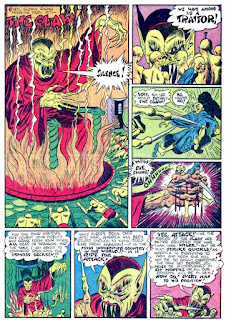 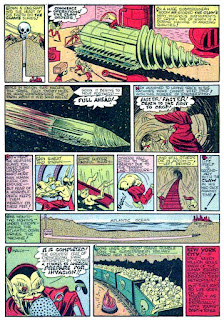 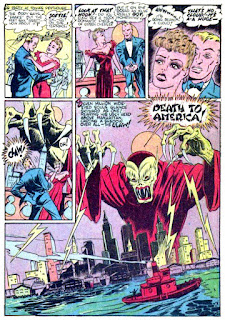 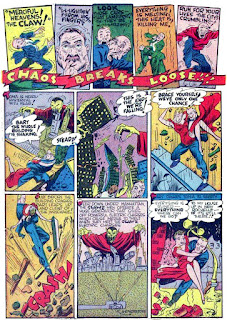 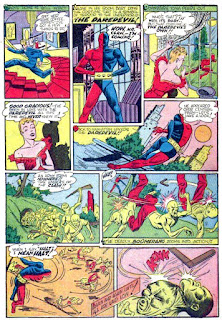 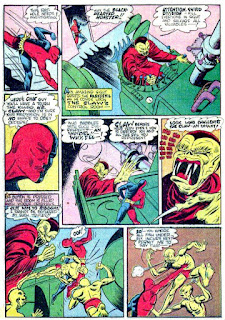 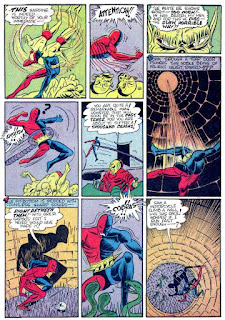 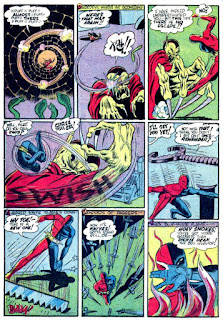 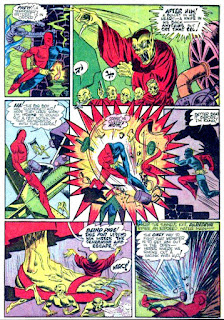 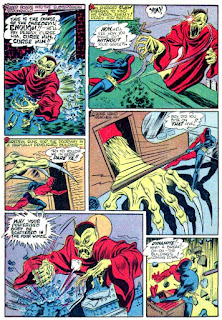 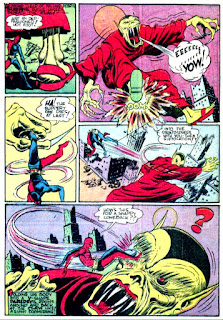 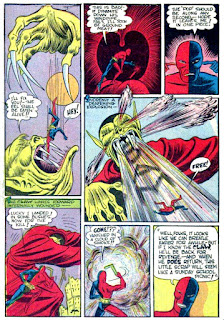 I've already stated months ago my appreciation for Cole's peculiar Grotesque (Demons Dance On Galloway Moor is a good example). The Claw is one of the most impressive villains I ever saw, though its great potential was never fully explored, I think.
As for "this" Daredevil: in the 70' there was a Marvel character (created, methinks, by the omnipresent Roy Thomas), called "3D Man". Maybe his costume was inspired by Daredevil, for there is a strong resemblance in my opinion. The funny thing is that 3D Man (created in the 70's), was in truth a fictitious Golden Age hero. His adventures took place in the 50's and the character itself was quite... ridicolous, in a 50's style. If I remember, he was a crippled guy who could gain super powers (and a part of the spirit of his dead brother) wearing a pair of those silly green and blue 3D glasses used to watch movies and read comics... he had to fight a Skrull conspiration to invade us, if memory serves. Rascally Roy was probably trying to recapture some 50's vibe, including bad commies etc. The result was not so astounding, to say the least.
Gosh, all these lines for some remarks that don't even concern the story! I have your same problem Pappy, I wish I could acquire the synthesis Daniel shows.
But I'm a citizen of Logorrhealm.

This is one of the greatest comic book stories of all time. I try to imagine what it must have been like to be a 10-year-old buying this issue at the newsstand, but I'm not sure that I'm any less enthusiastic reading it now as a geriatric adult.

Gerry, thanks for the comment. I have tried to put myself in that situation, wondering what it would be like to be a 10-year-old buying these comics when they first came out. What I can do is remember what it was like as a 10-year-old buying Batman and Detective Comics, or as a 13-year-old buying the first issues of the Fantastic Four and Amazing Spider-Man. The sense of wonder never seems to go away, although I see the old comics now with a different viewpoint, mainly through the work of the artists and creative people, not from the view of callow youth, which concentrated on the characters and their super powers.

That was fun! Spandex superior hero comics can get tiresome to me rather quickly but this one I enjoyed. The whacky exaggerations in drawing and plot show us comic book creativity all right. Thanks to Daniel œconomist's insight. Whereas I simply wondered what tricks might be hidden in Daredevil's stylish utility belt and how the tunneling gizmo would handle the volcanic Mid-Atlantic Ridge. But comics wouldn't need consider plate tectonics for at least another 25 years, if ever.

J D, Daniel does have a way of getting right to the point. He nails it, as we say in the States.

Say what you want to say, J D. Say it in your own way and don't worry about it being too wordy. I enjoy reading your comments, just as I do reading the opinions and comments of other readers who are kind enough to spend some time writing and sharing their opinions with the rest of us.

This story is simply hysterical with energy.

Did they take out life insurence on all tha heros or sumthing?

I bet all theze L8Ys R realery in on a insurence scam Pappy! It wuld xplane Y so meny of tha heros wer dead by tha 1950s rite?

Russ, well put: "hysterical with energy." I like that description.

Alicia, could it have been something to do with the stories like Double Indemnity, by James M. Cain (and made into a great movie with Barbara Stanwyck as the evil wifey) where the wife seduces the insurance guy into helping her murder her husband? Even in today's world people are still trying that old scam.

I'm not a fighter, but if I went out looking for a fight I'd take Ronda Rousey with me to take are of business.

7f7, what if that tunneler ran into a major earthquake fault? I shudder to think, although I doubt the Claw would care. The more victims the merrier!