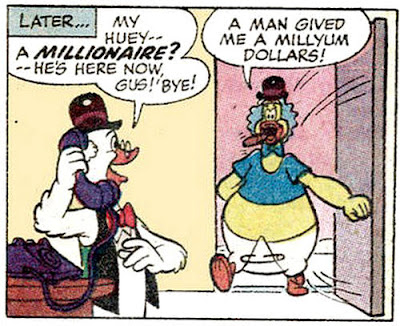 Not long ago I mentioned ignoring Harvey kiddie comics in the 1960s, then catching up to them in the seventies. There is a lot of repetition in those comics, because they were aimed at a young age group, but it does not mean they could not be creative and funny. I recently found three stories I thought were interesting, and funny enough to scan and post.

“The Millyumaire,” starring Baby Huey, satirizes a television show I remember from the fifties. The Grand Comics Database doesn”t list the artist, but based on a panel with “Taras” lettered on a window, I’ll make a guess it’s drawn by talented Marty Taras. It’s from Baby Huey and Papa #4 (1962). “Nightmare in ‘Pre-Hysterics’” is drawn by Howie Post, and “Casper Meets Goldilocks” is by Warren Kremer. Both stories are from Casper and Nightmare #13 (1966). Enjoy. 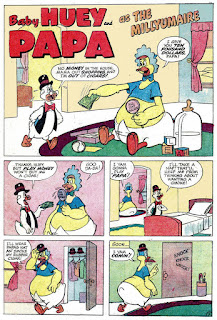 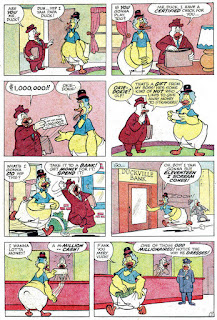 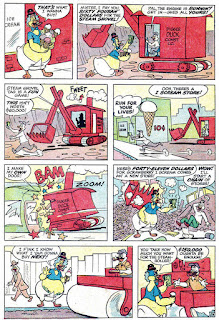 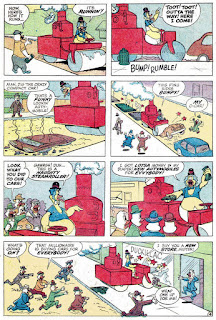 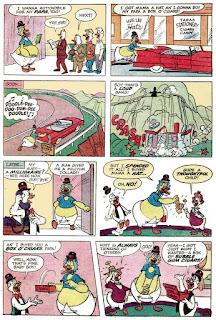 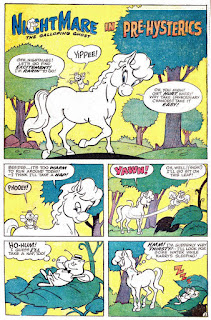 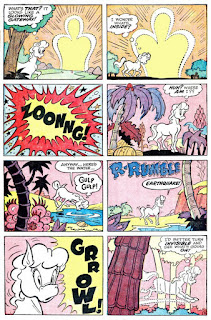 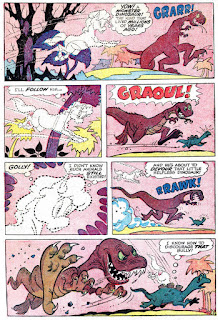 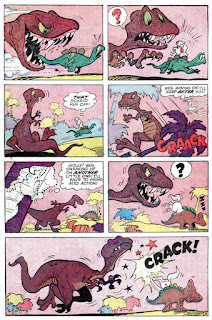 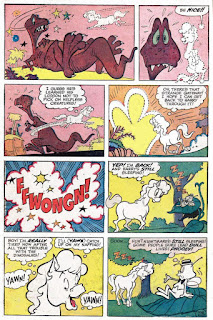 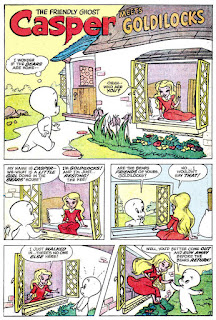 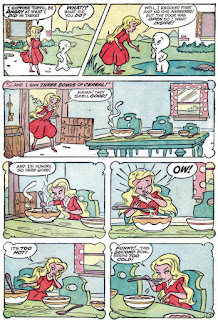 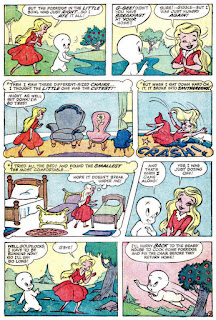 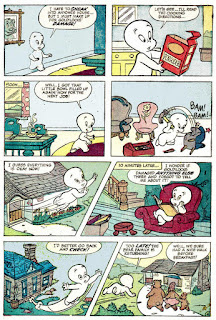 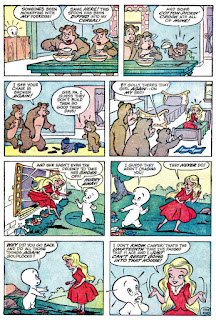 A gracious window to some comics I'm not familiar with. Have you shown these to your kids? We had Casper when I was a kid but it was not my fave, really.
We are also not so familiar with the Goldilocks' tale. Reading this, I thought about a comic version by Errol McCarthy I read in 1979 in an underground magazine... NOT suitable for kids! (but great art).
I'm a fan of "The Dropouts", so it's nice to see Howard Post in the NightMare's story. I like to think this story is a nudge to Walt Kelly's Prehysteria/Pandemonia.
First story: That is one dumb duck! Funny slang. Speaking of underground (of sorts), I guess this is the kind of comic they love in Howard the Duck's homeworld. :-)

F'ank you mery vuch for those nice storees, Pappy!
It's difficult to imagine those comics were meant only for little kids when they use a title like "Pre-Hysterics," with a difficult word and a pun.

OMG theze R so badass Pappy yo OMG thoze dudes drew so well its betterer then computar amination yo srsly How can u tell who is who? Its so perfect like a machine drew em.

Alicia, what you notice about the artwork looking like a machine is probably because of the excellent inking. Inking at Harvey Comics was mostly done by women, and all had worked in animation.

"A guy named Lee Donahue was one of the earliest inkers at Harvey and he set the inking style there. Helen Cason, Ruth Leon, Jacqueline Roettcher, Roberta Edelman and Frank Carin were the main inkers in the 50's, 60's and 70's. Of them, Jacqueline was the best. She might be the "different" one you noticed. Interestingly, they all were inkers at Famous Studios, which is how they came to work for Harvey."

The first time I saw Jacqueline Roettcher's name in a credit was after Harvey folded, and Marvel snapped up some of their artists for their Star Comics line. She was inking Warren Kremer there, also. Even though the artists worked in a house style, their individual artistic characteristics give them away. Just takes a little practice to spot the differences. P.S. artists Kremer and Post are deceased (2003 and 2010 respectively). Kremer also drew crime and horror stories in his younger years. I have a horror story by Kremer during Halloween week.

Right on, Ryan! I don't think they talked down to the kiddies. That might surprise some people. Harvey Comics were produced by adults for children, but they weren't childish.

J D, the Three Bears story is so well known right from the nursery, that even very young children recognize it instantly. There have been endless riffs on it...my personal favorite is from Chuck Jones' Warner Bros cartoon version, and if it hasn't been taken down for copyright reasons, you can find it on YouTube: