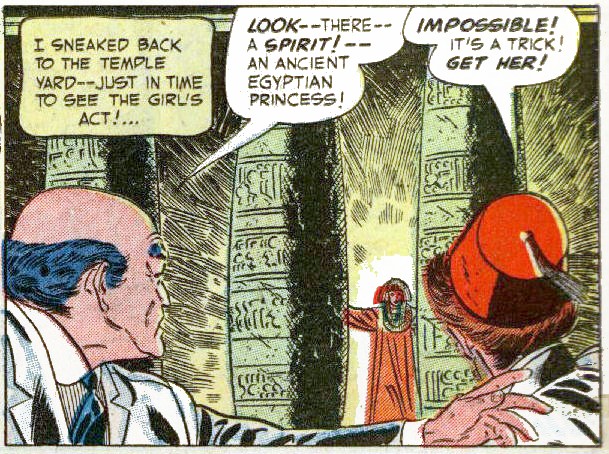 We have our final posting for this theme week, Deceased Comics, presenting stories from comic books DC cancelled many years ago. Our story today is from Danger Trail #5 (1951), the final issue of that title.

Alex Toth and Bernard Sachs did the effective work on this Egyptian adventure amongst the pyramids, when our hero (not named until the last panel, when his new girlfriend tells him her name), falls in with some crooks involved with stolen antiquities. The writer is listed by the Grand Comics Database as David Vern.

As to why Danger Trail was cancelled I don’t know. I have speculated before that editor Julius Schwartz might have been too busy. (See the link below the story.) What throws my spec off is that with issue #5 the title of the comic appeared ready to change, dropping Trail. This half page house ad from the issue, with all of DC’s titles listed, shows just Danger. Also, the title between the DC colophons at the tops of each page is blank. 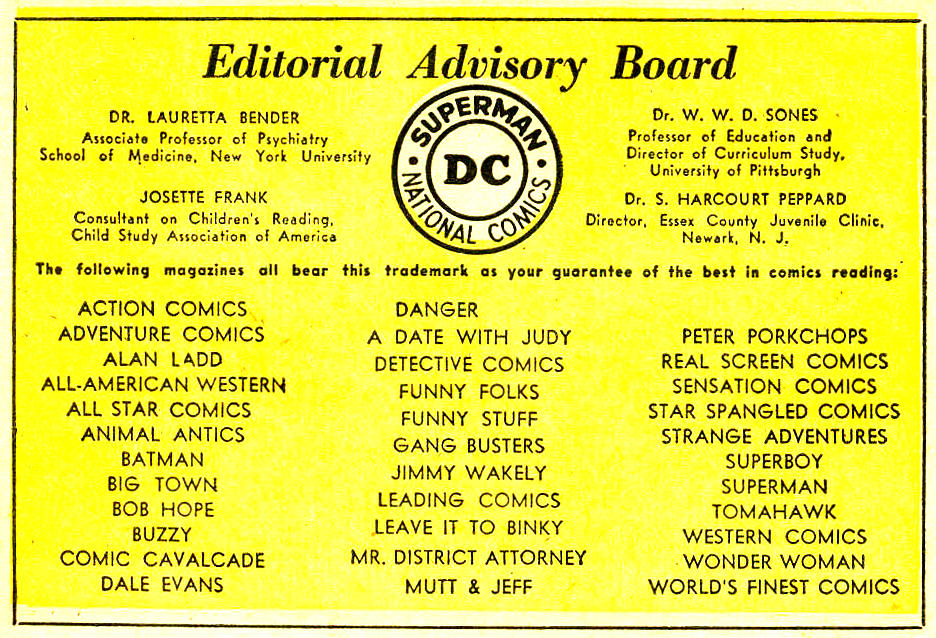 Maybe for a time someone at DC thought the book was worth saving, and that could be done by changing the title. Maybe, as I have also speculated in the past, sales were just bad for a book of stories featuring exotic locales and adventurous characters. It is a bit late for us to know for sure. 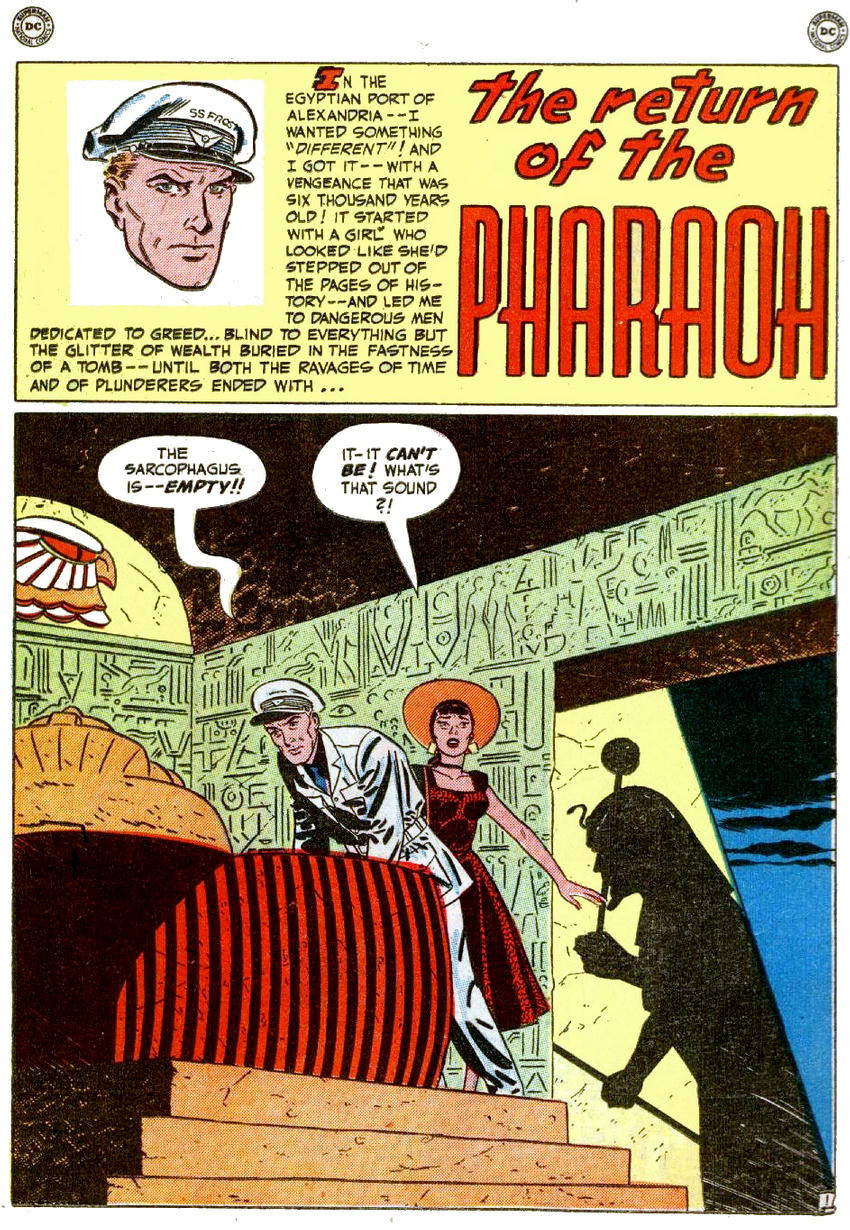 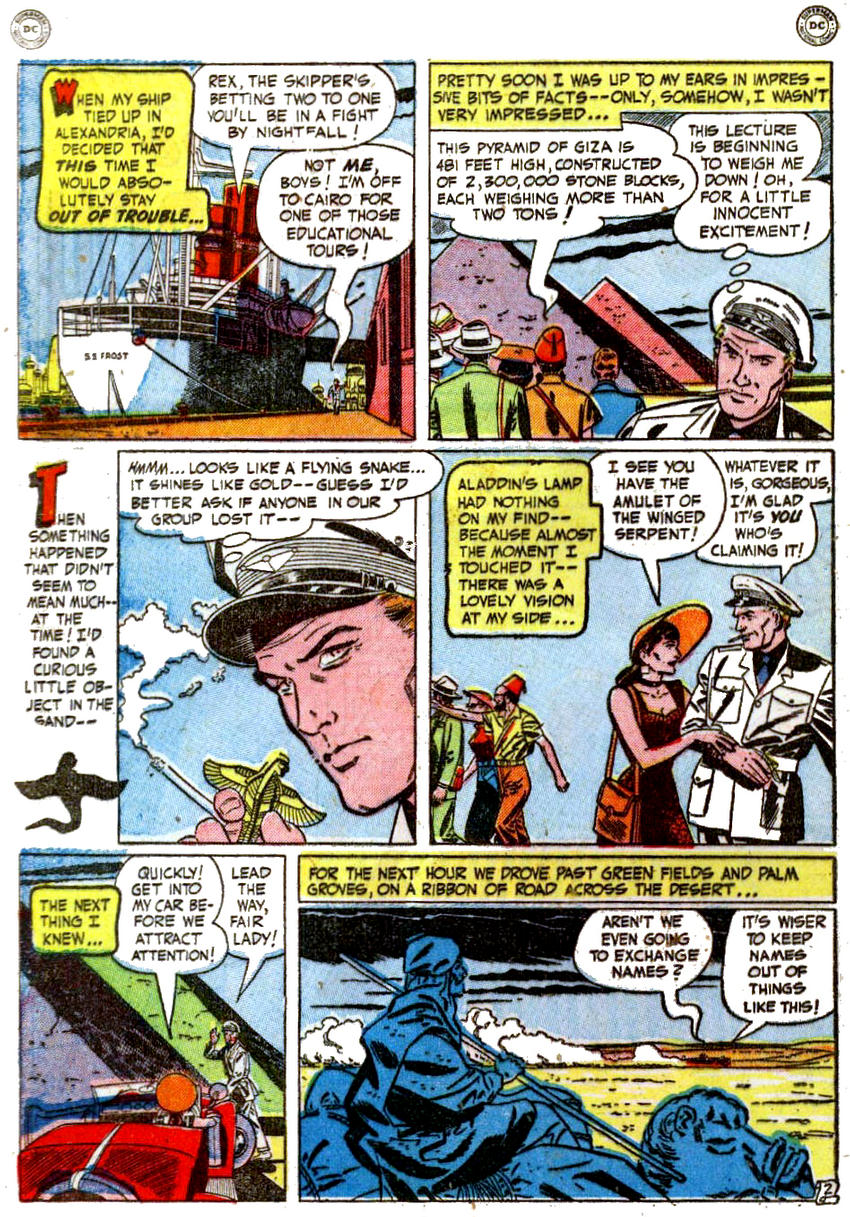 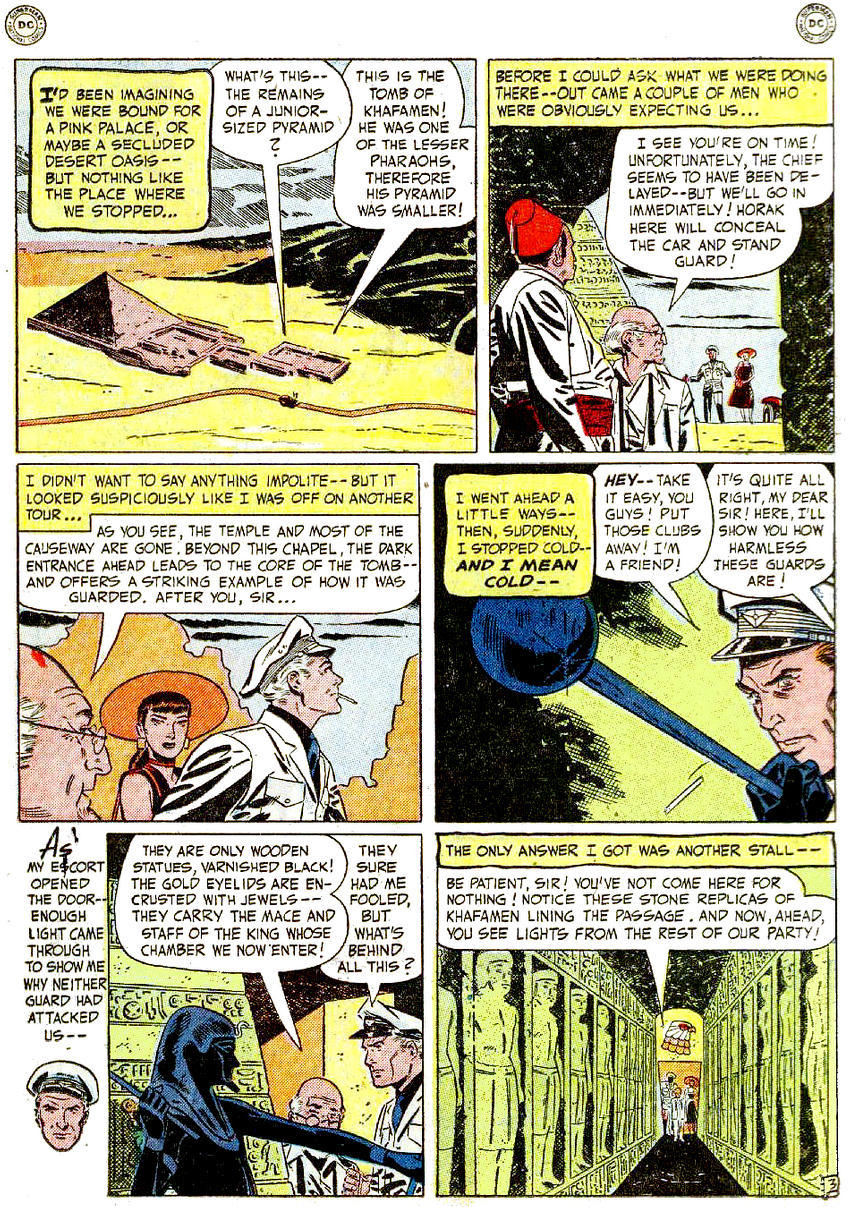 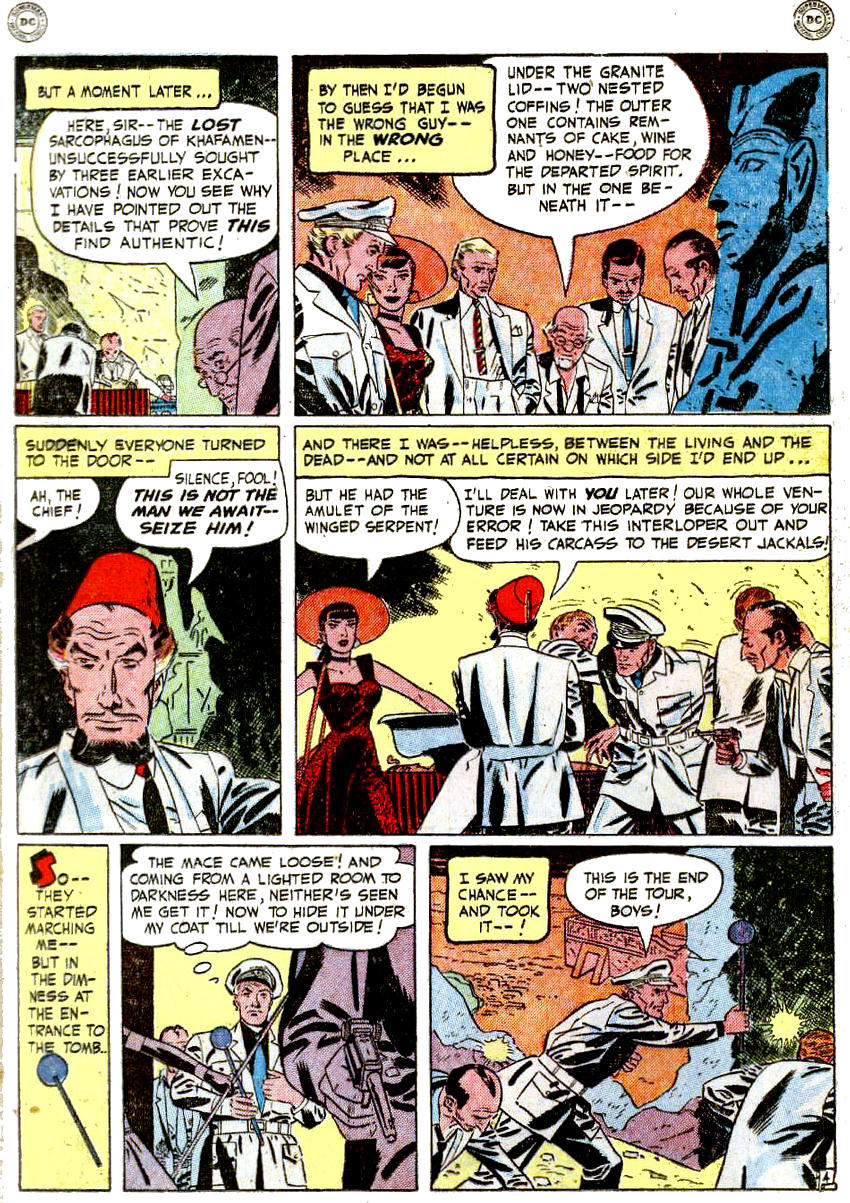 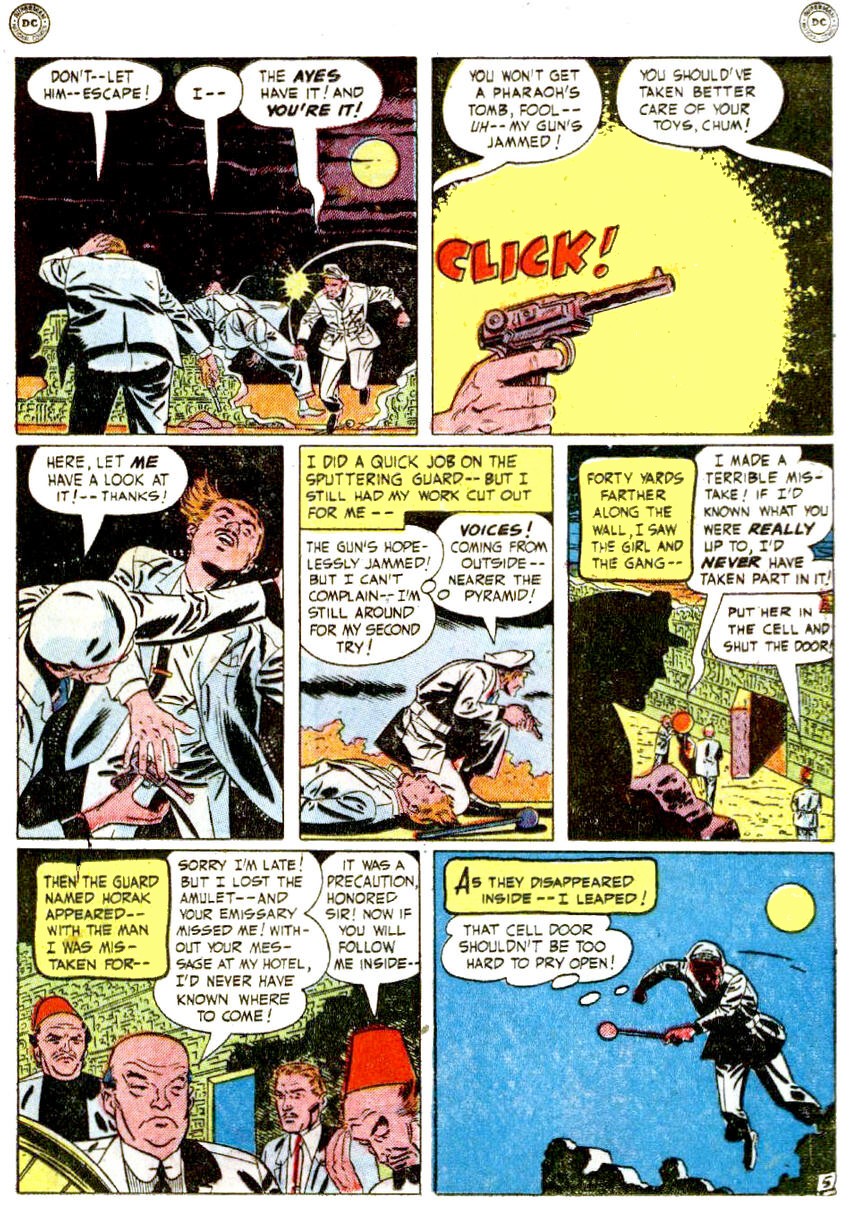 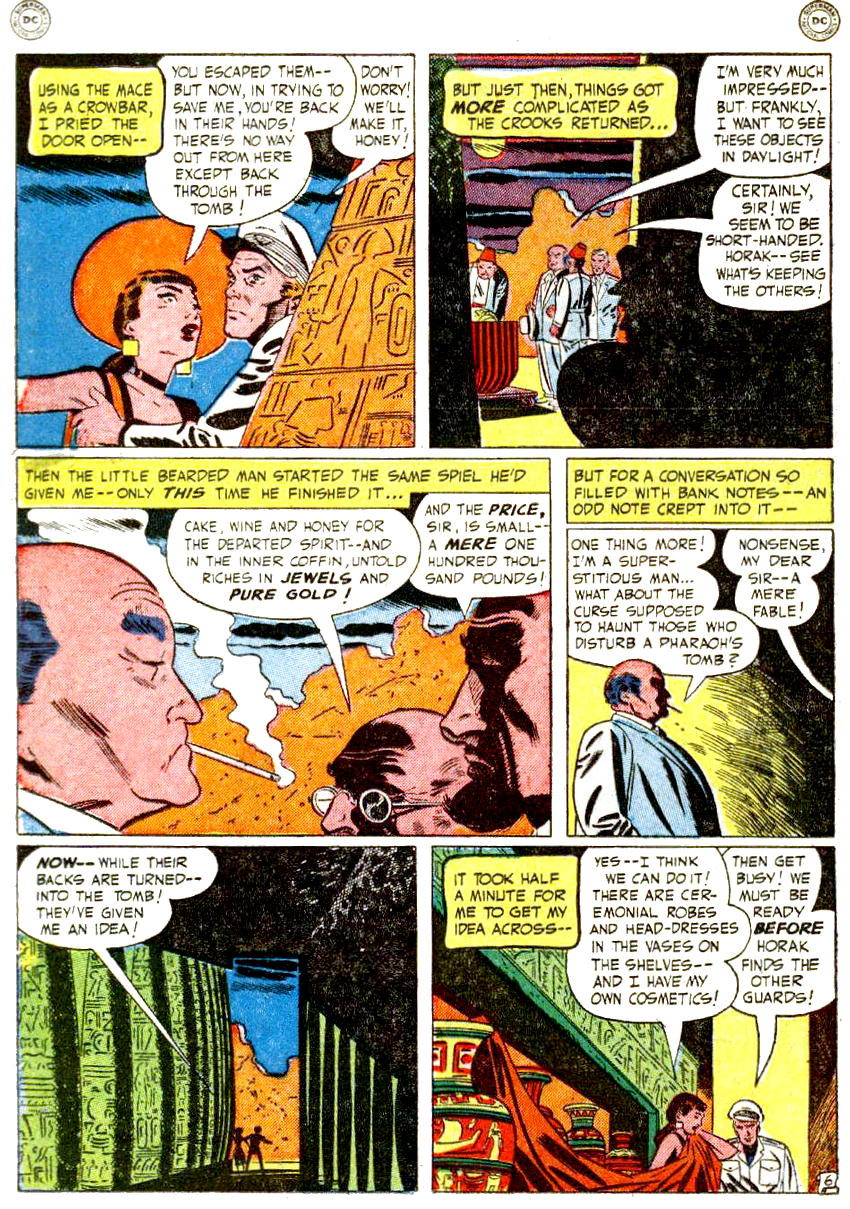 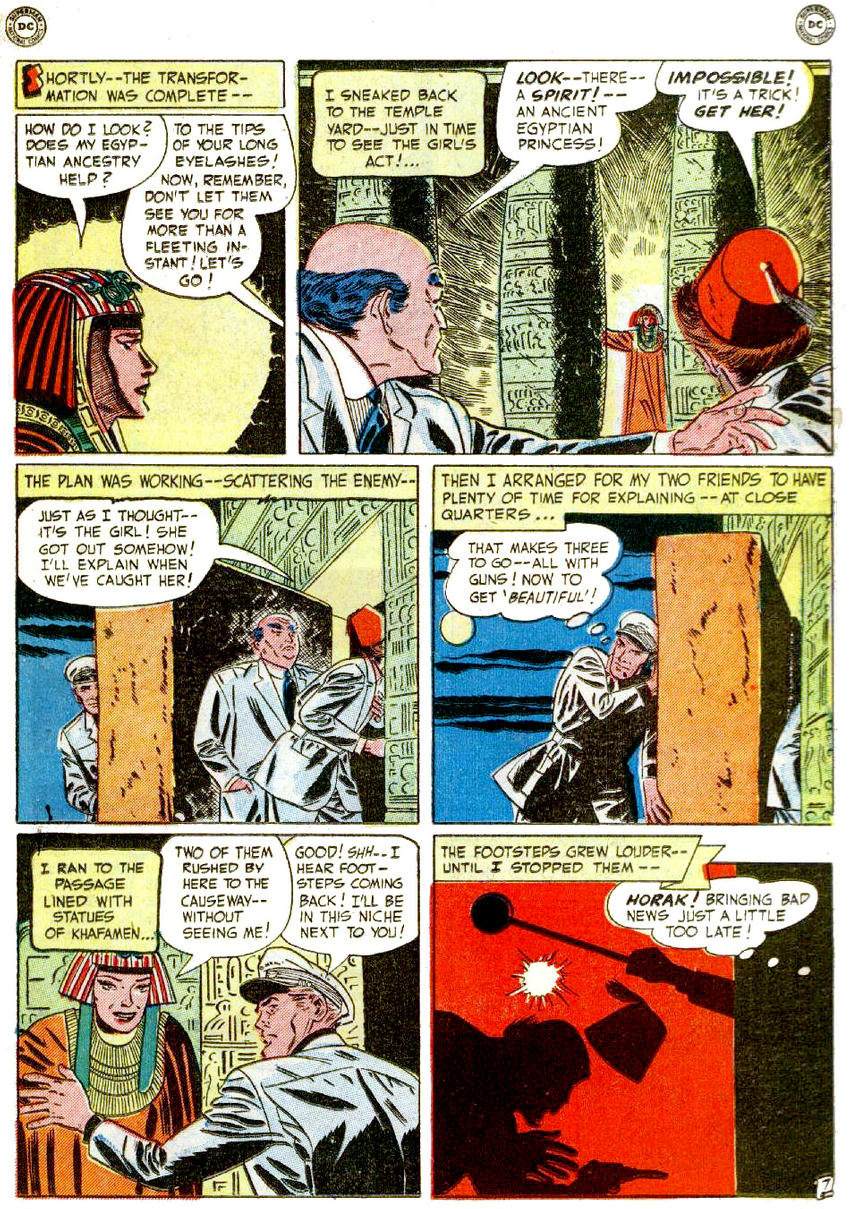 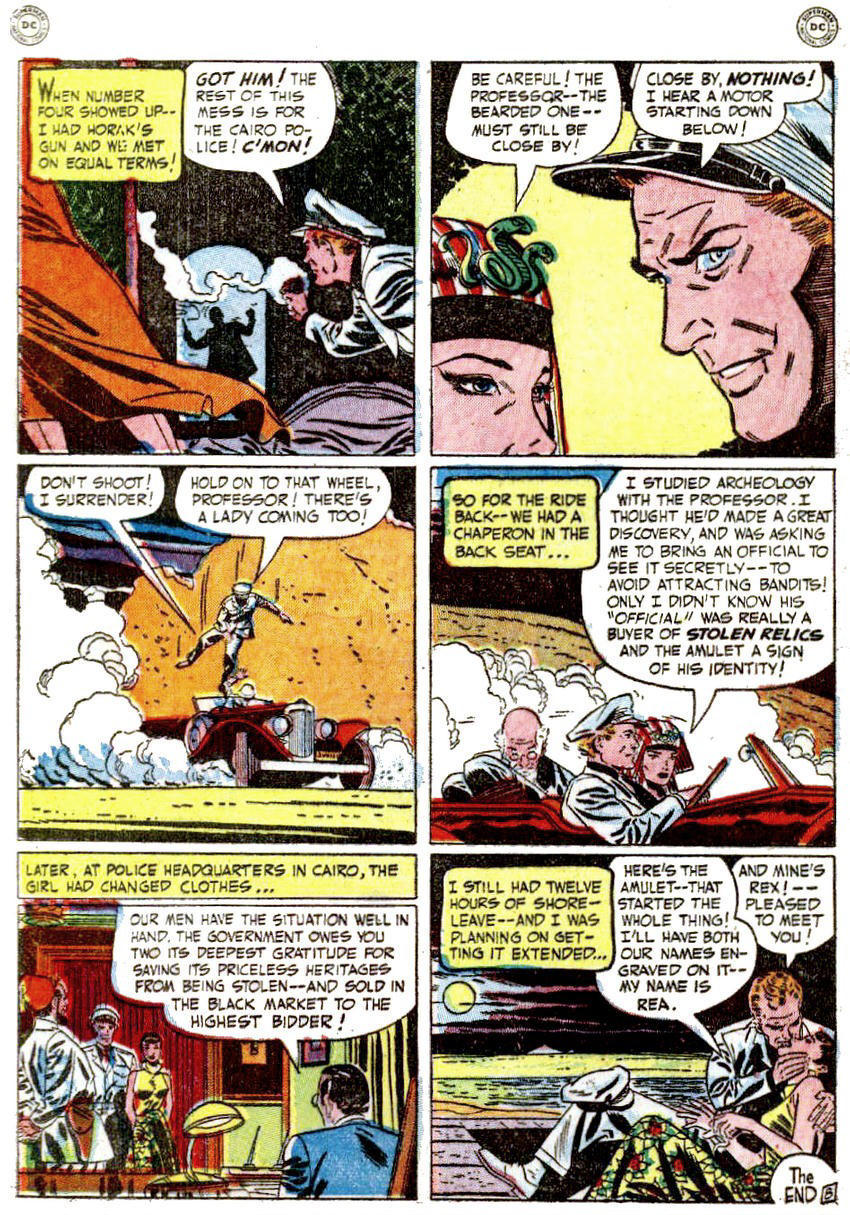 As promised, the link to another Danger Trail adventure. Just click on the thumbnail. 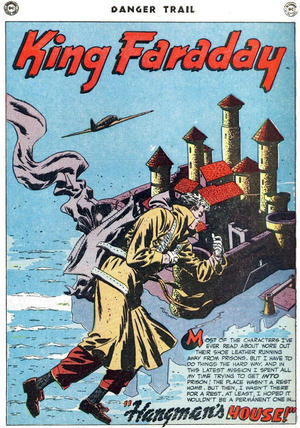 Aside from the art, this one's unintentionally funny. "Aren't we EVEN going to exchange names?" And of course the hunk misunderstands the lady adventurer and keeps repeating cheap macho lines like a real clod...Seldom I've seen such an annoying dumbass "hero". I must say the second story is better. Wordy or not, we have at least a cool hard boiled dialogue in pages 1-3

J D, David Vern Reed (né David Levine) was a pulp magazine writer brought to the comic books by DC editor Julius Schwartz. He is mostly associated with Batman. You have him to blame for the dialogue.

A comic book entitled “Danger Trail” or “Danger” ought to convey a sense of excitement and of, well, danger. This tale does not.

The essential story is a lot like the sort that would once have been used for two-page text filler (to qualify for discounted postage). The first-page splash doesn't fit the tale to be told, perhaps because no thrilling scene lent itself to be made into such a panel.

The delivery is padded. For example, the second page uses six panels to do the work of three.

And, beyond that, this is a very wordy attempt to embrace the ethos of a “man of action”. (Your comment on the history of the writer provides some explanation. It would seem that he'd not learned how to let the pictures in a comic book carry weight that words would have to bear in a pulp.)

Both Danger Trail stories entertained me. The plethora of captions, the first-person macho narration, amused. The overreach of the writing style strikes me as funny. Names of our heroes, Rex & King makes me wonder if Danger Trail might have had other stories with lead characters named, say, Regis, Nabob or His Majesty. =smile= Maybe you'll post some more Danger Trail one of these days, Pappy. I would never have seen these if not for your blog, I suspect. Thanks.

7f7, good catch on the names. Since the editor was Julius Schwartz, who was affectionately known as Julie, perhaps he was sensitive toward real kingly names for the stories. A tough guy named Julie just would not do.

"Nabob" I like...I called my brother, Bob, that until he insisted I stop that and call him Robert. Tsk tsk. He'll always be Nabob to me.

Daniel, on the one hand I understand why Danger Trail used the text-filled stories, to try to appeal to those readers who may also be reading paperback books. I assume comics like this were aimed at slightly older readers, maybe teens or guys in the military.

But you are right about telling a story visually. I find the same thing in movies. I would rather see the character in action than have him talk about it.

Daniel, certainly proper names: King, Rex, Regis —maybe named in wishful thinking or as a salute to a natural leader. Should Pappy's parents named his brother Nabob? I don't know but my parents would have done fine to name me Foregone Conclusion.

I have DANGER TRAIL #2 and interesting enough this is the only issue of that title that I have physically seen. Why are these early fifties DCs so scarce? You can't beat Alex Toth's creative story telling techniques. Just think if he had gone into the motion picture industry instead of comics...I bet he would have made the same lists as such greats as Orson Welles and James Wong Howe.

Mike, I don't know why these things are so hard to find. The only issue I own is Danger Trail #4, and that is missing the covers and the four center pages!

A. Everyone who owns an issue of Danger Trail is hoarding it, or:

B. They sold poorly when publishing, so they are rare.

I suspect B to be the correct answer.

That doesn't explain your larger question of why early fifties DCs are scarce.