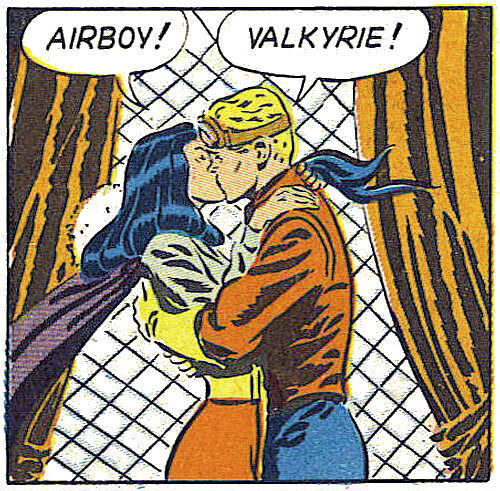 The instant Airboy sees his old flame, Valkyrie, he and she are magnetized together. Lust is in the air, boy, when Valkyrie enters the room. One wonders with that lip-lock going on in the panel above how either of them got a word out.

Five years ago I showed the original story of Airboy’s Valkryrie. Just see the link below this story. I also have another link to another treat, a different Valkyrie: from Blackhawk, drawn by Reed Crandall.

But the Valkyrie we are concerned with today appeared in Airboy Comics Vol.3 No. 6 (1946). The artwork is by Fred Kida. 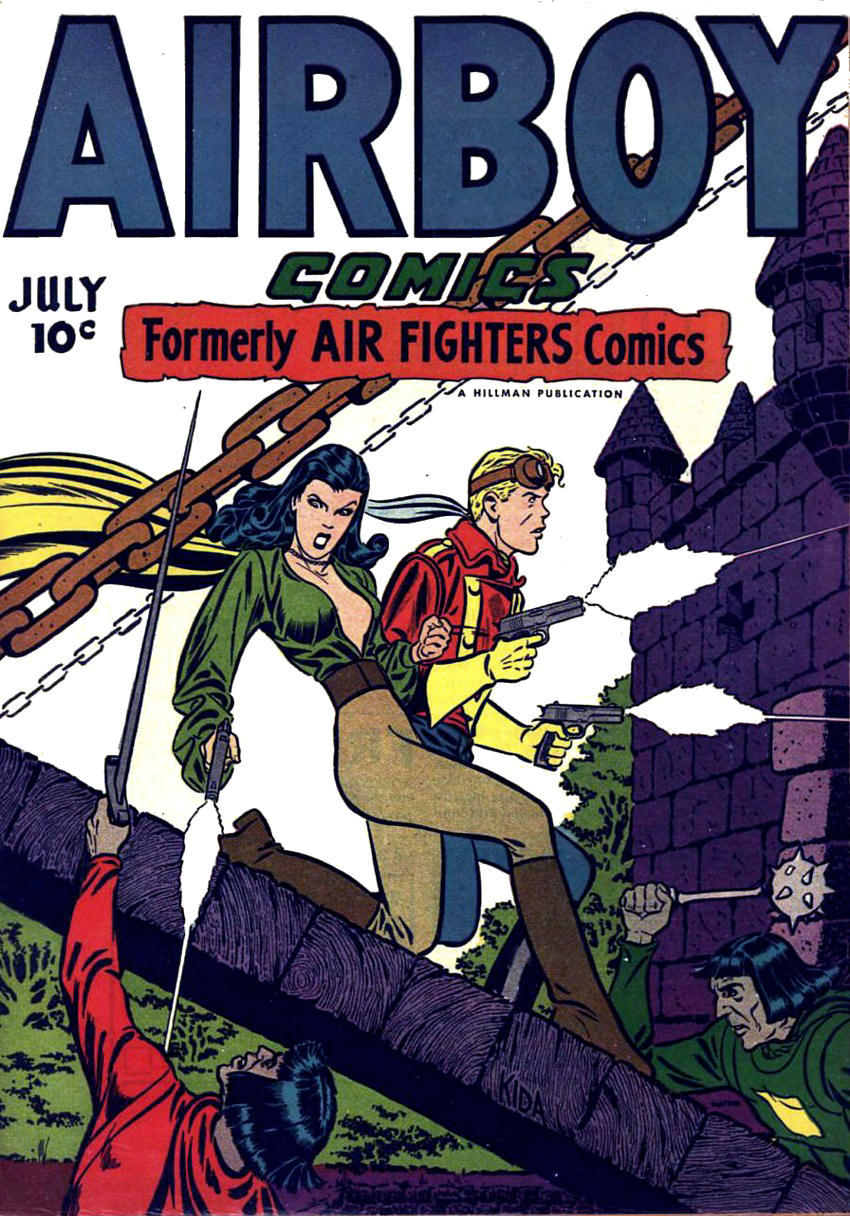 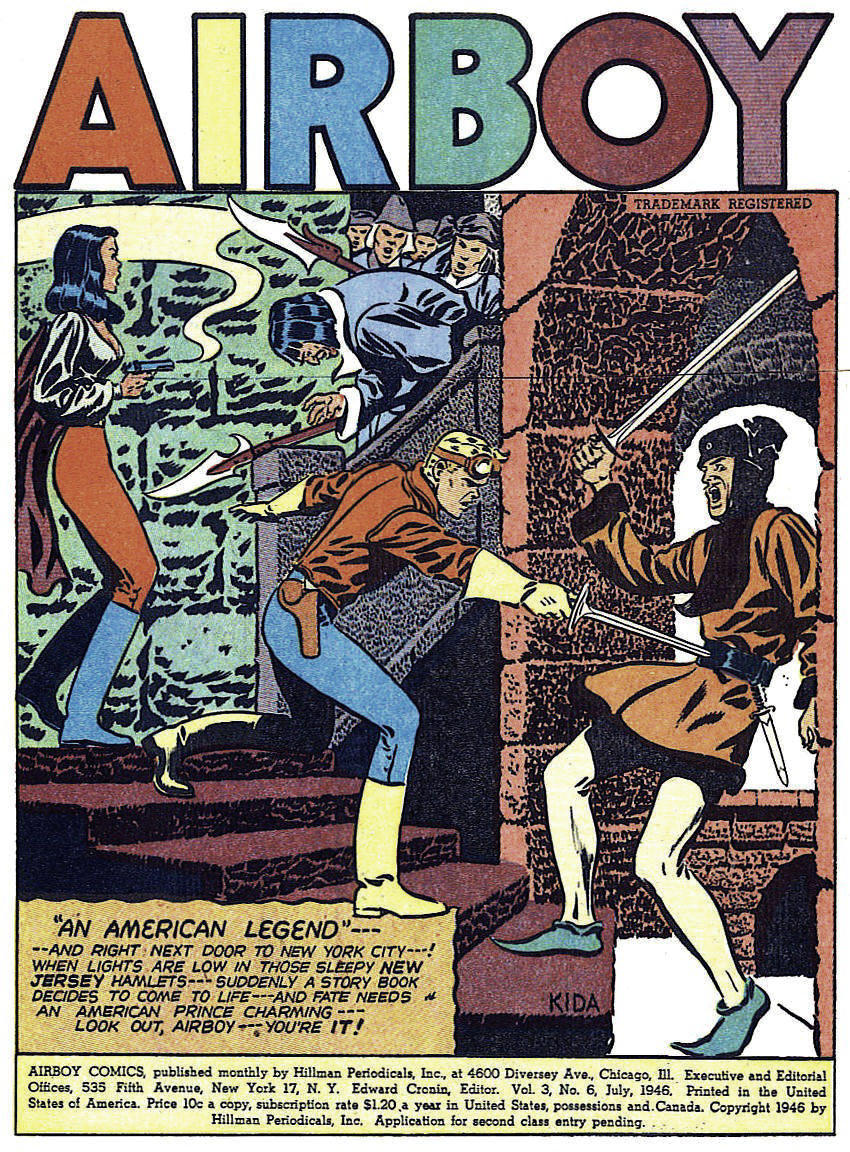 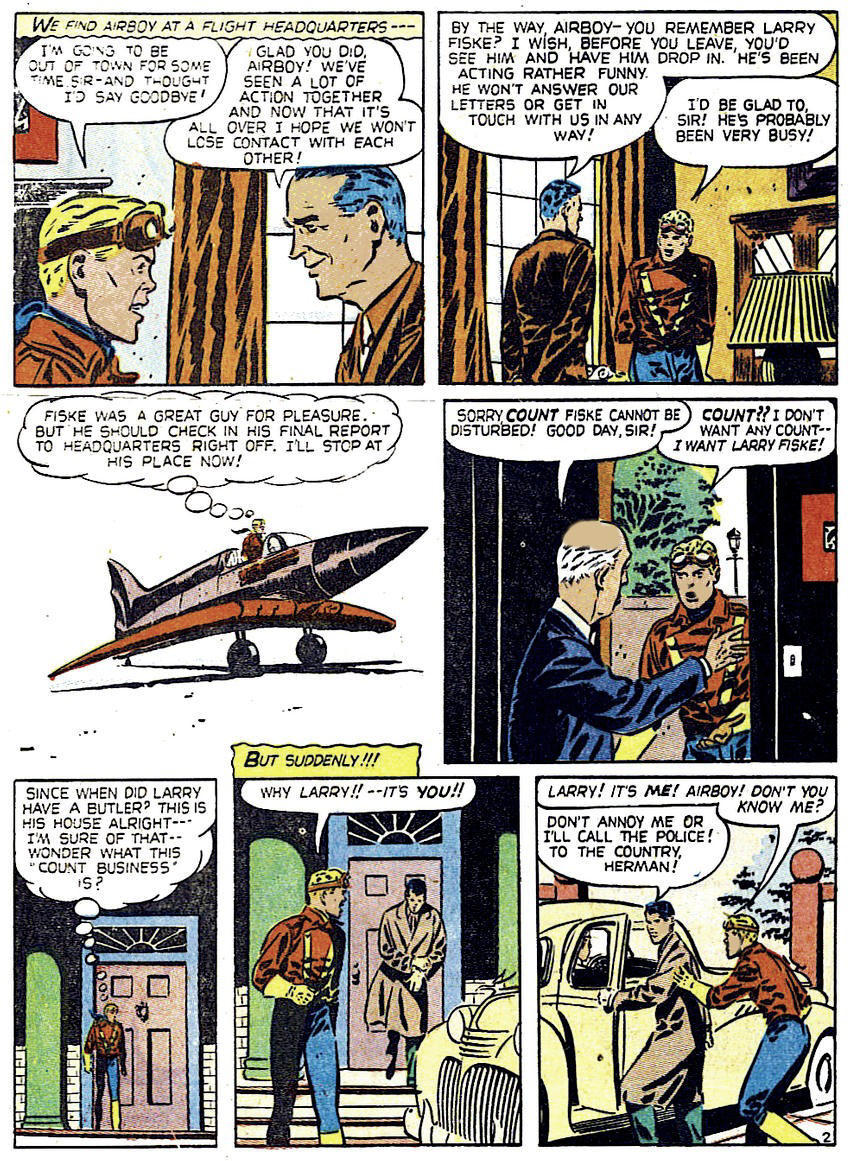 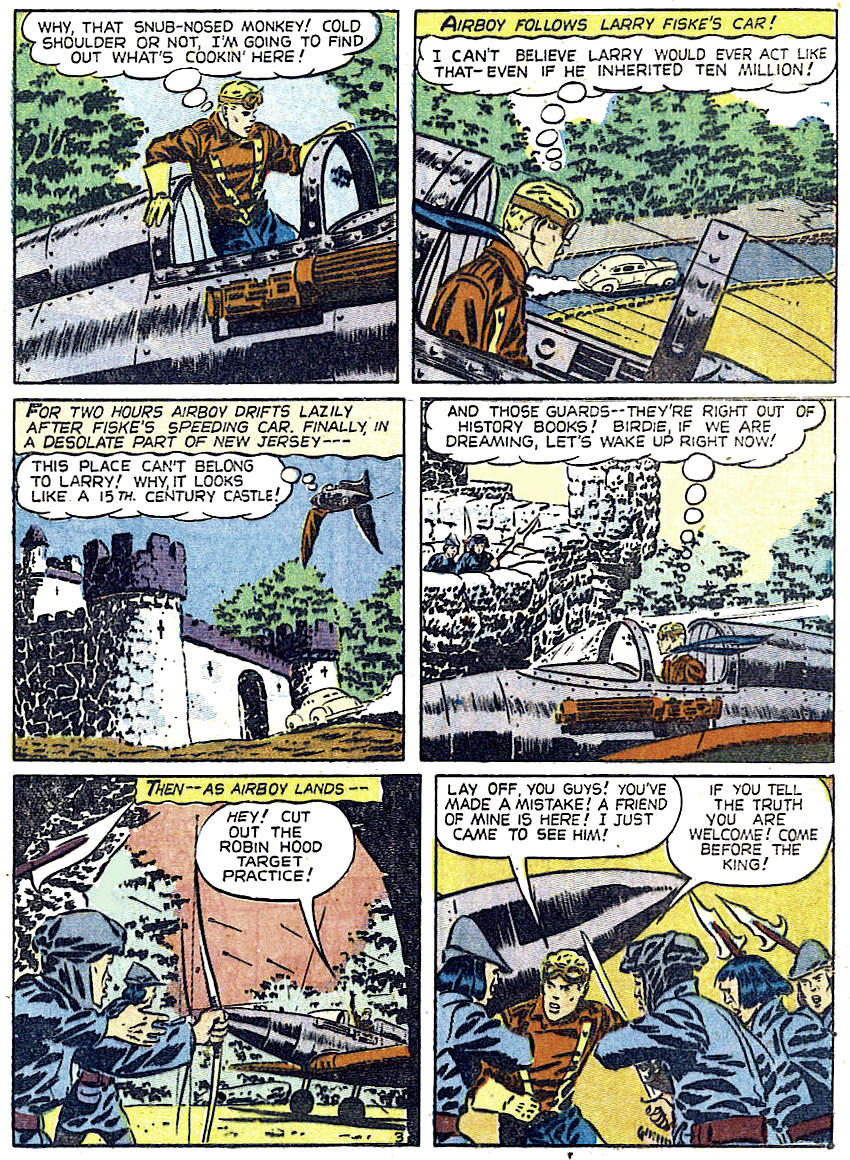 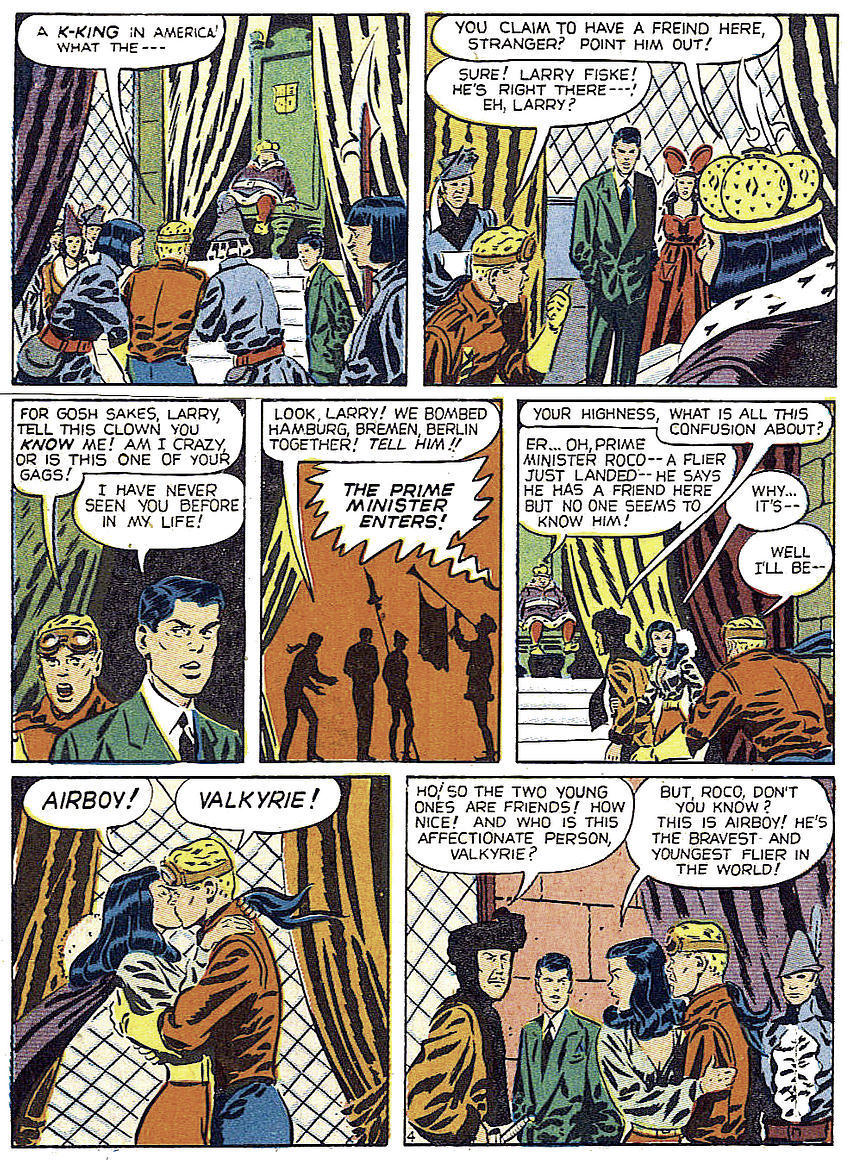 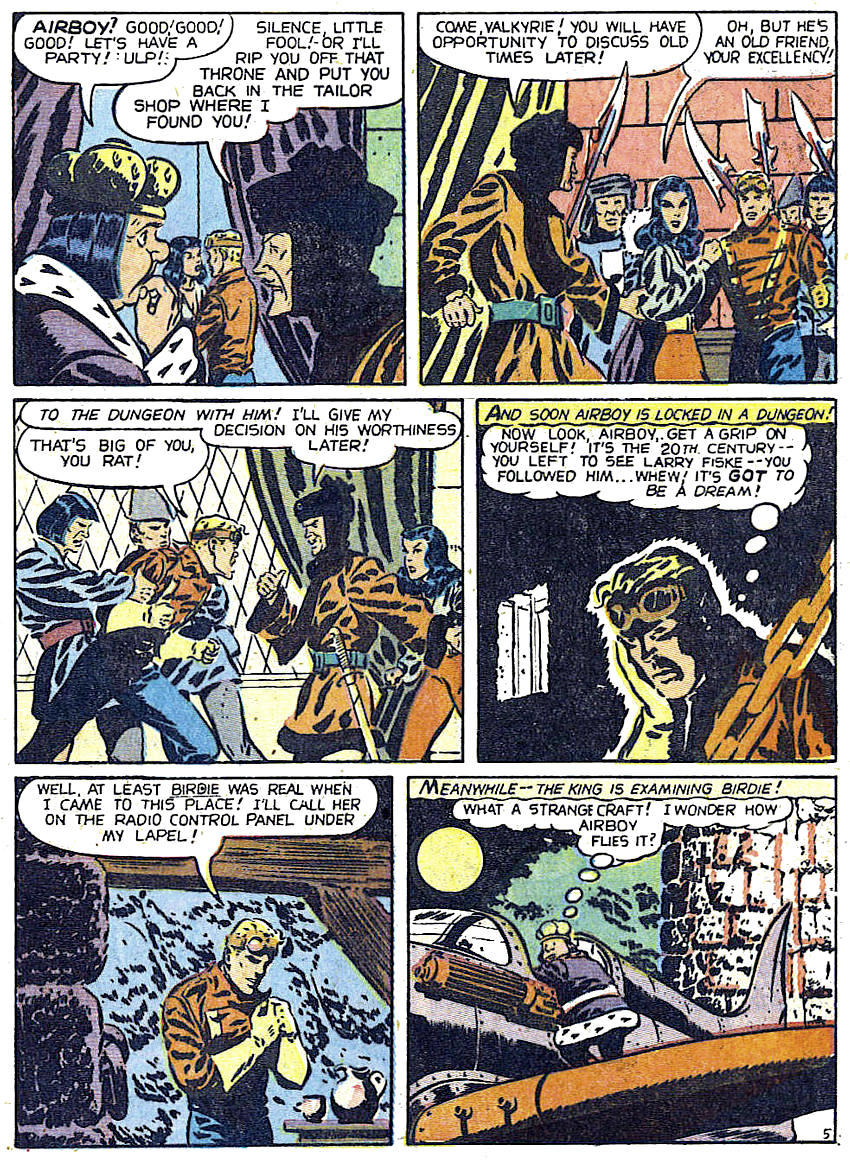 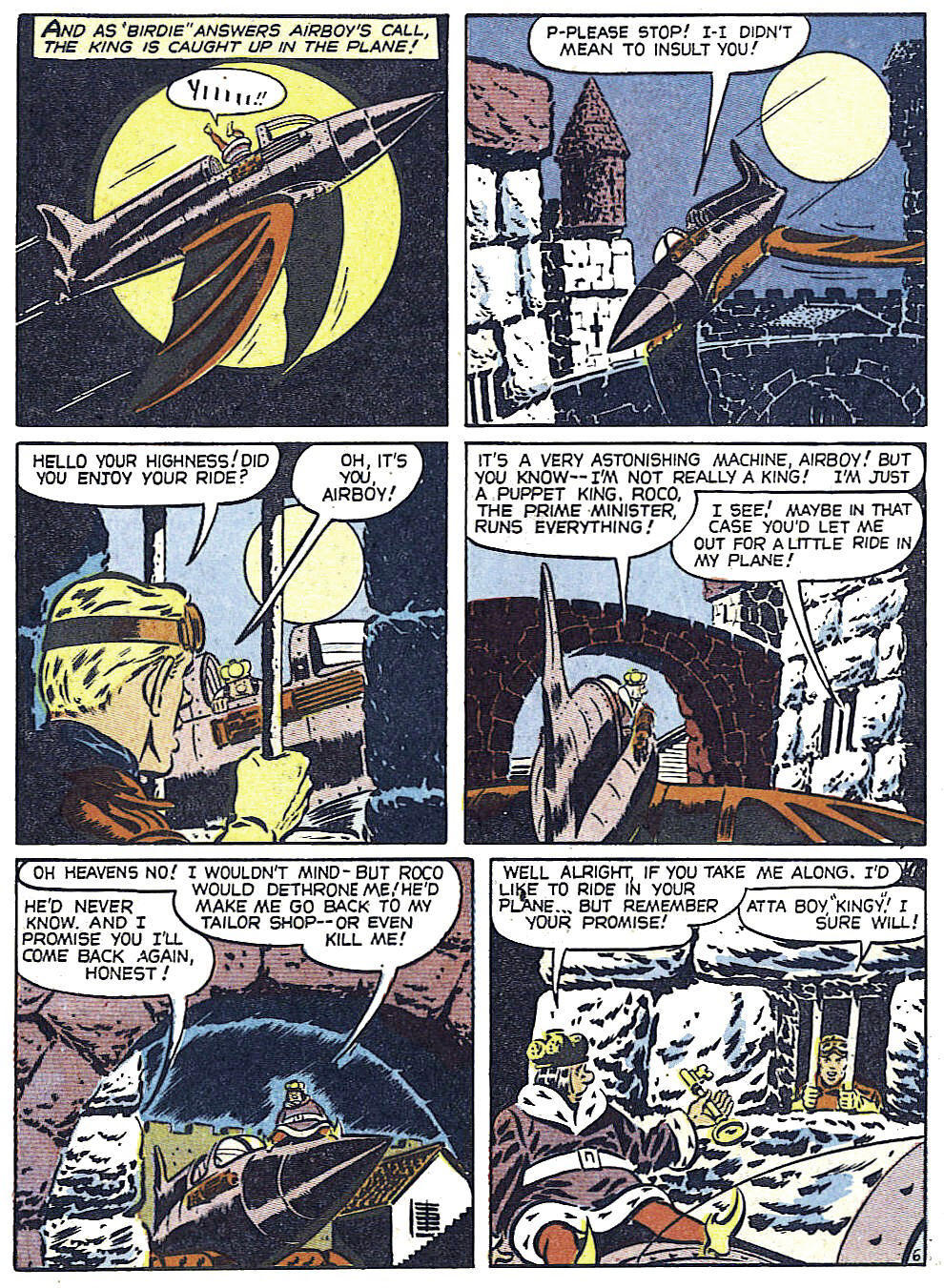 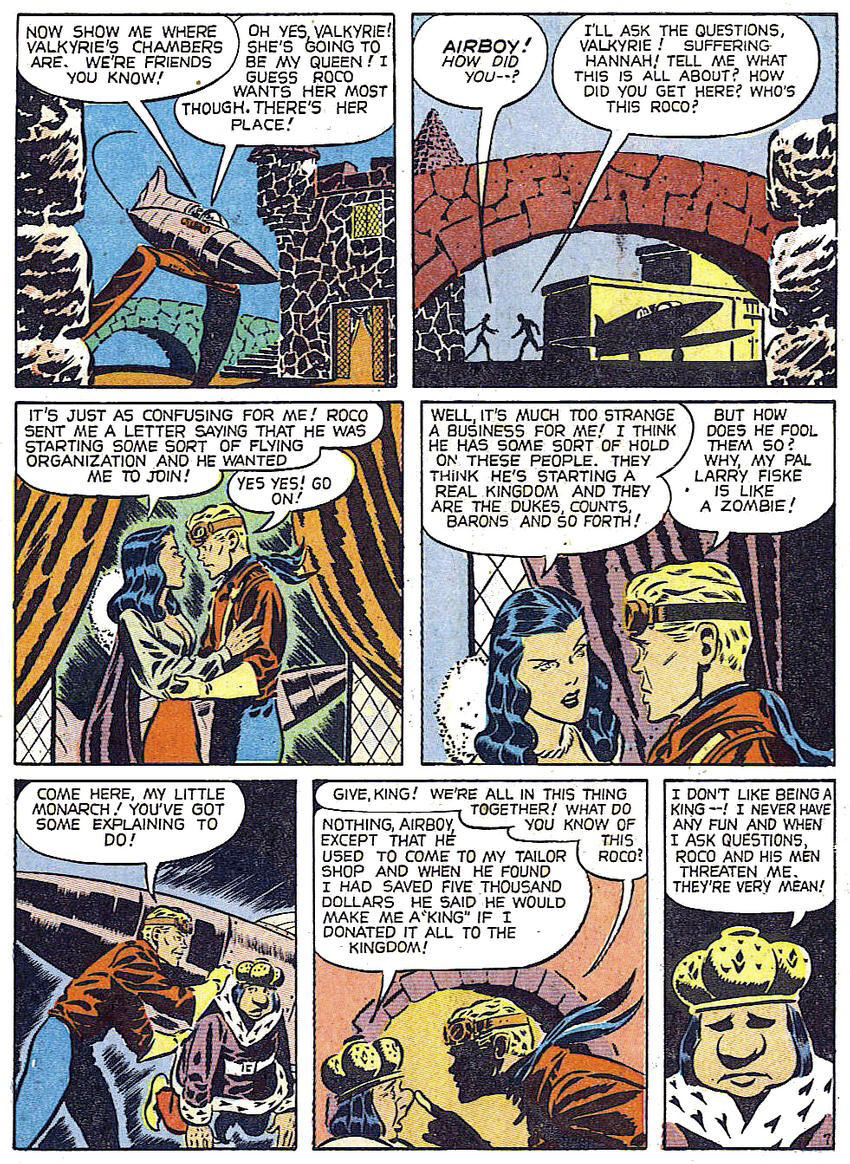 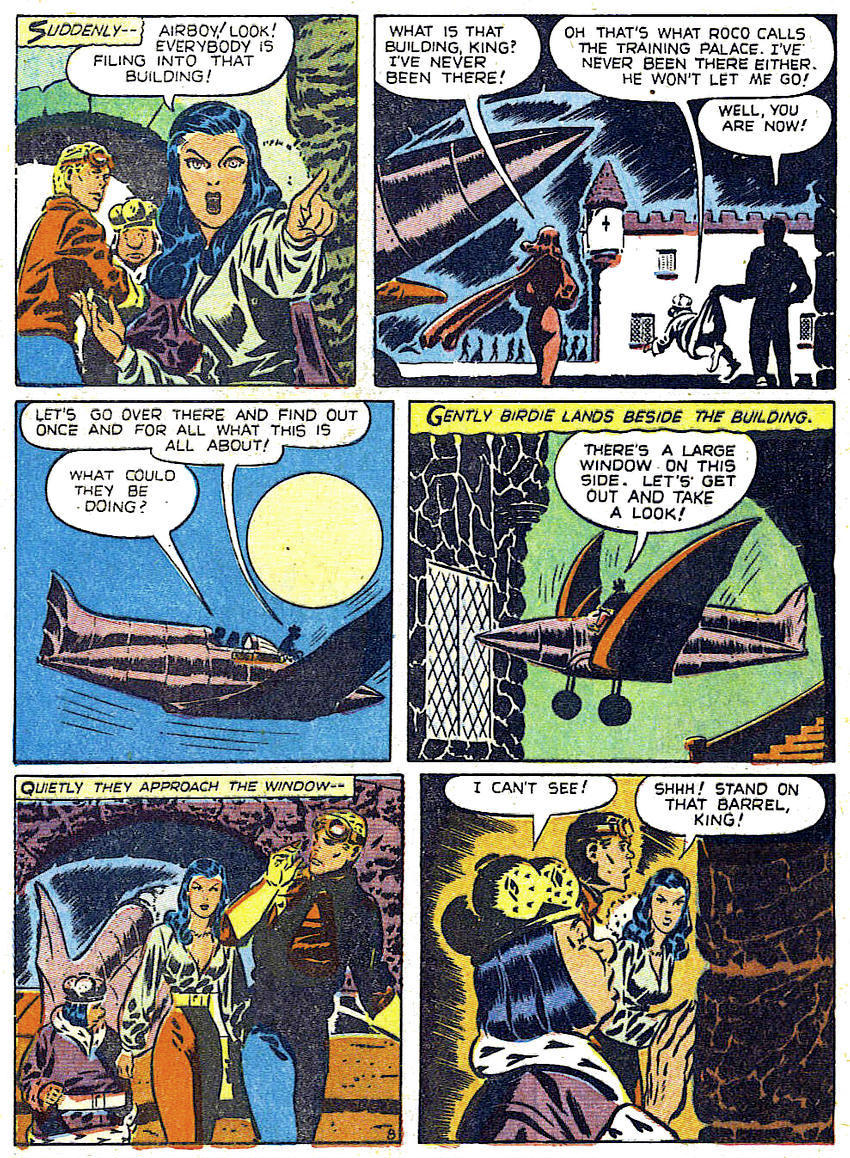 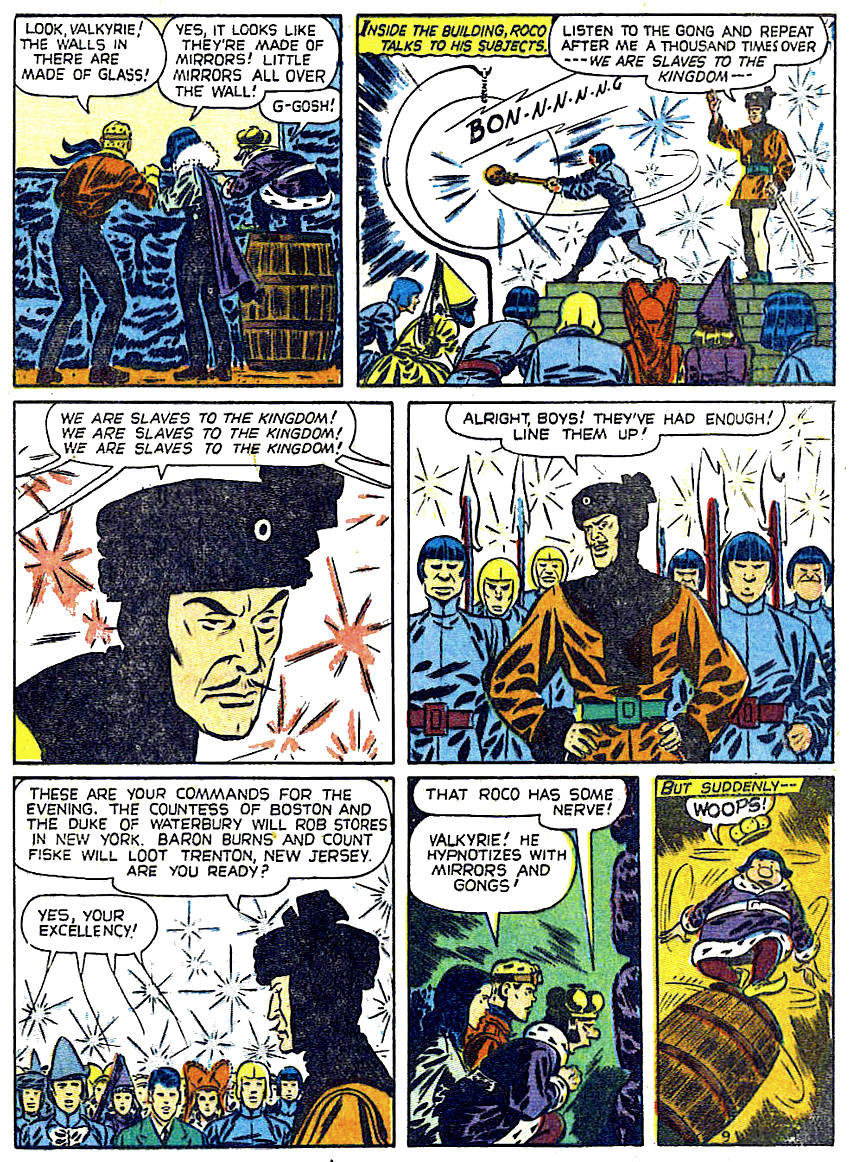 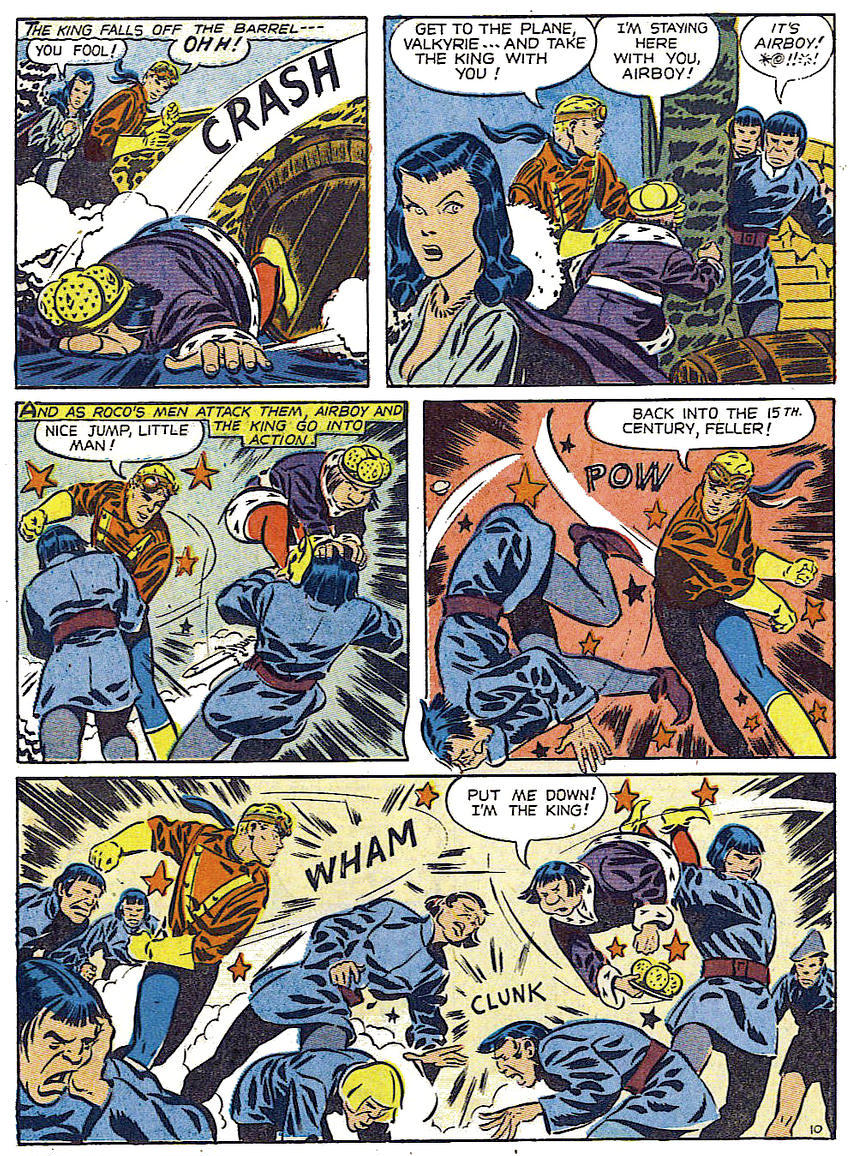 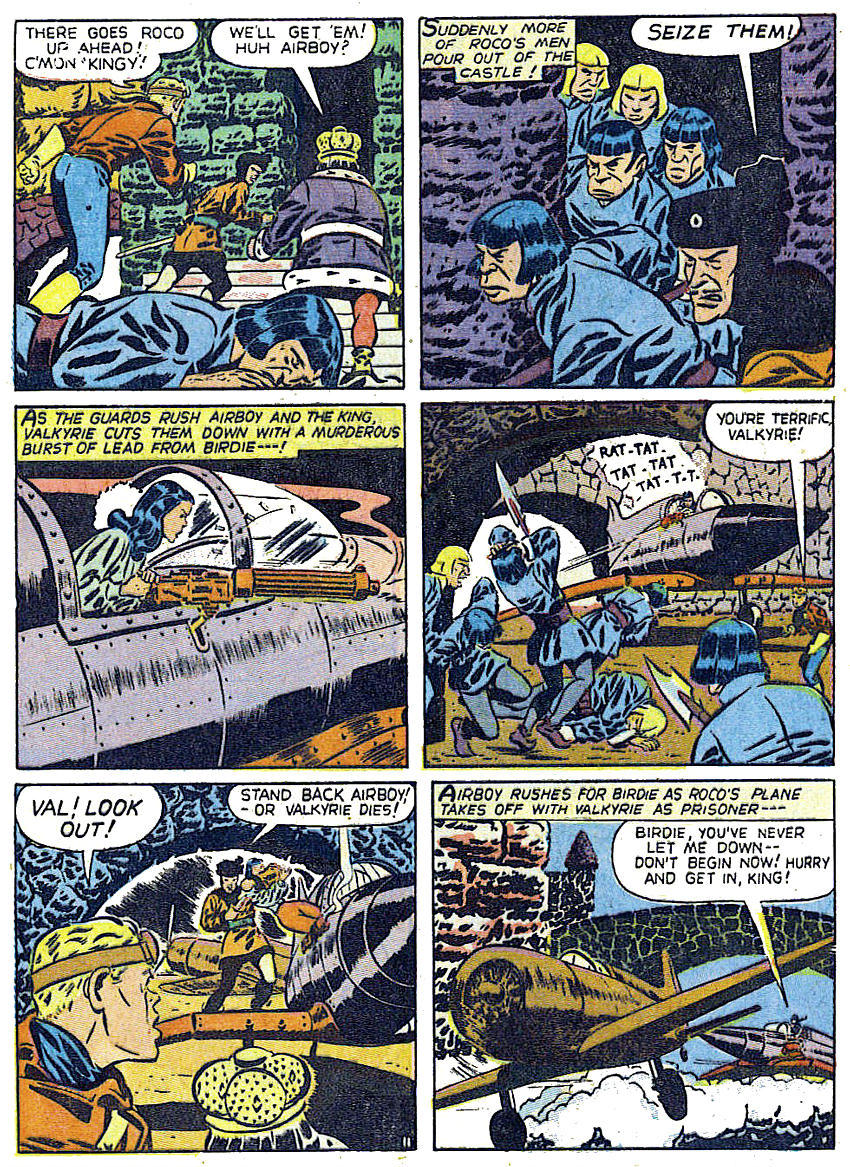 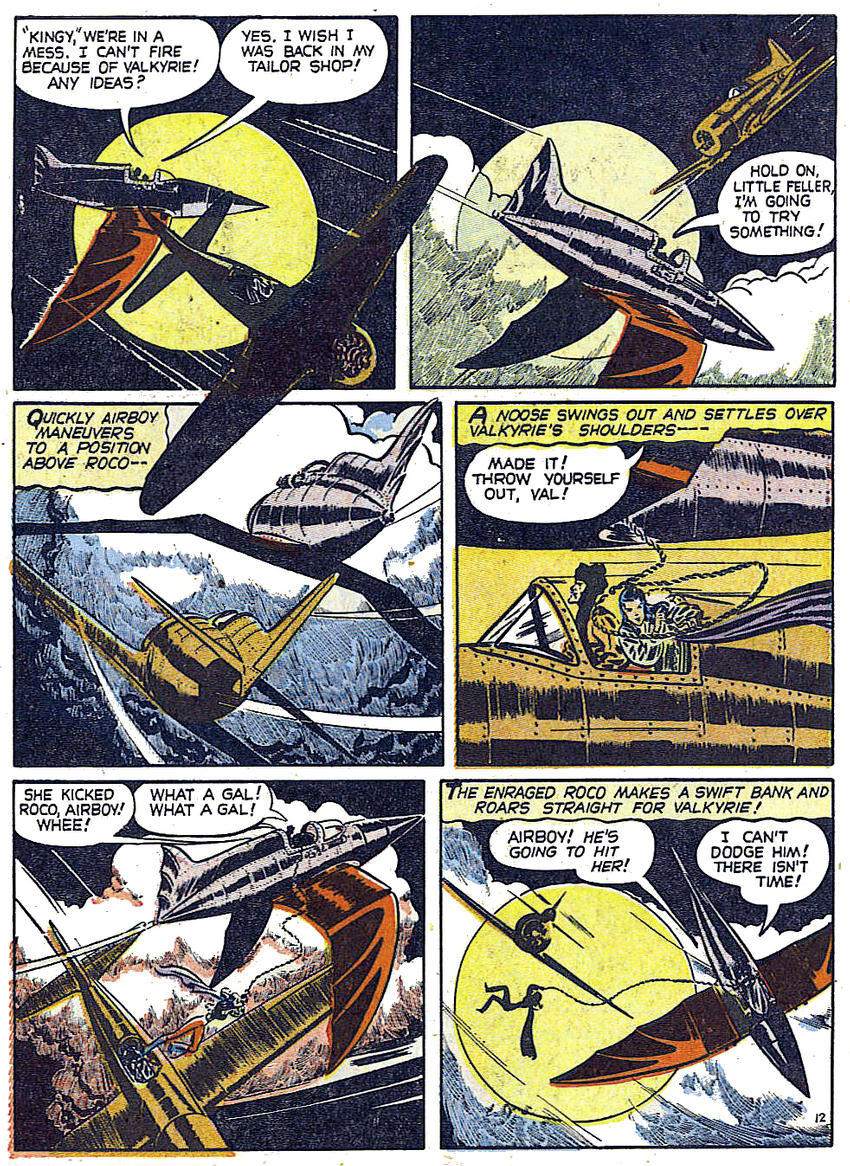 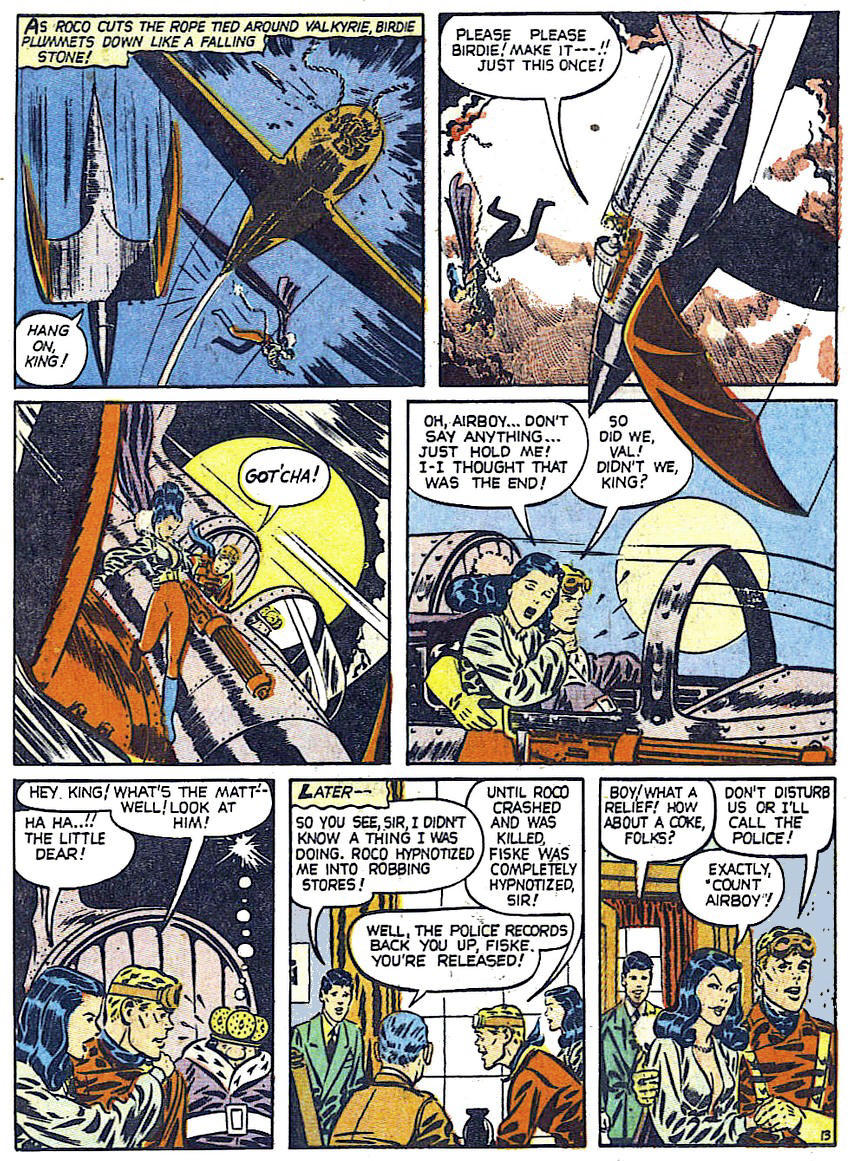 As promised, more Valkyrie(s)! Just click on the thumbnails. 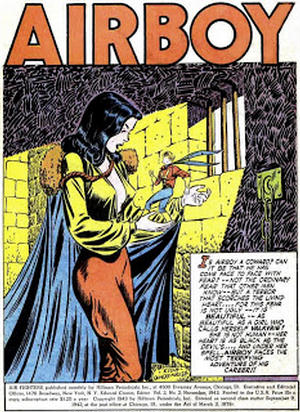 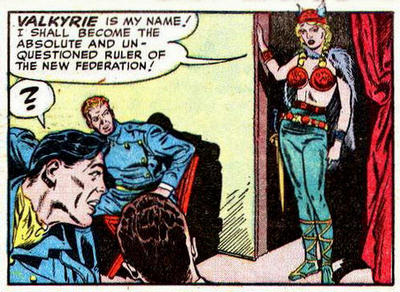 Hard times for comics veterans in 1946. No more Valkyries to redeem, no more Nazis and, up to now, no Koreans commies to fight. So you end up in campy stories like this.
But it's always nice to find an old buddy ("We bombed Bremen, Hamburg, Berlin together". Good ole days!).
I got a friend, haven't seen her in, say, 15 years. Don't know where she is. Should I meet her, I'd do exactly the same thing Airboy did (not sure about her reaction, though).

I have that story in a black and white collection devoted to Valkyrie, but it's nice to see it in color. It's kind of annoying how everyone calls him Airboy all the time; it's not like he's a masked superhero with a code-name. He even calls himself Airboy instead of Davy! Weird.
Have you read Eclipse Comics' "Airboy" series, Pappy? It was a pretty good "sequel" to the original, and Valkyrie was better fleshed out (no pun intended). But it was creepy how she was in love with the original Airboy's son, even if she had been kept young through suspended animation.

Ryan, I have the Eclipse Airboy issues in storage, haven't looked at them in years, but I remember them. I think for an update they seemed less revisionist than most re-do's of old comic book characters.

J D, ah, you hot-blooded Italians. You were too young, so you couldn't have been the brash male who pinched my mum on the butt when she was visiting Italy in 1969. I would advise you not to launch yourself at an American woman and give her an Airboy/Valkyrie liplock. It's considered assault or at best sexual harassment, hereabouts.

No, in America it is illegal to kiss someone against their will, but in some circumstances it is legal to shoot them. Go figure that out!

That friend was special, Mr. Pappy. I even made a couple of random phone calls here and there. "Excuse me miss, are you the same E. S. who used to live in...", go figure this! Nothing. Disappeared like dust in the wind. Oh, well...
Aside from that, Ryan made me think: If Val became the German Steve Rogers in 1945, maybe this story was just a dream in her suspended animation... This would be the only way to save this story, a nightmare" per se".
P.S.: Your mom chose a VERY interesting year to come here.

Daniel, I could repel any home invasion without a gun, just by threatening to kiss the intruder. No one would wish to suffer such a fate.

J D, well, if the person is that special, then good luck on your search.

It is just me, but I never try to find anyone from my past. I'm in the telephone book, and if they wanted to talk to me they could just call me. The trouble is, the people who have reached out to me over the years were those with whom I didn't care to reconnect. I would not call someone who might not want to speak to me. A sort of pre-emptive rejection on my own part.

Pappy,
There's another Valkyrie, appearing in Comic Cavalcade #17 (Oct/Nov 1947).
I've no idea if she's related to the Valkyrie in Arak, Son of Thunder #46 (July 1985)? Arak died while in the company of Vikings and was mistakenly taken along with them to Valhalla.