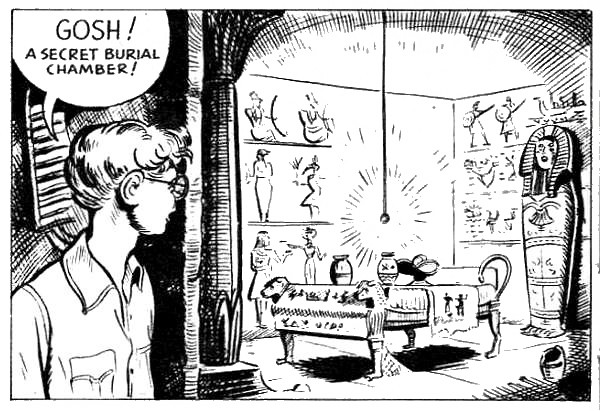 Thanks to Paw Broon for the online upload of this interesting comic from the UK, Masterman Comic. The date of the comic isn’t given, but based on what scarce information there is, the year of publication is probably 1953.

Masterman is an imitation of Captain Marvel, using a similar origin, including a supernatural being who gives young Bobby Fletcher a ring he rubs that turns him into a man. Since it has been done a few times (the later origin of The Fly comes to mind, also), the idea of a young boy suddenly gaining a man’s body, and a super-powered body at that, is a fantasy that is close to home. When I was a kid I would have loved to have suddenly become big and handsome and had super powers. Who wouldn’t?

The cover says “American Comic,” and the writing is a good approximation of an American comic, down to the dialogue. In this “American” comic no one says “Crikey!” or calls friends mates, or other young males lads or blokes.

There is also a science fiction story that is so wordy it is hard to get through, with a space hero (member of the “C.P.A.” So he's a Certified Public Accountant?) named “Gorton,” not to be confused with Flash Gordon, and believe me, you won’t. It has some giant penguins and a dinosaur, though. A special surprise is a four-page story by Dick “Frankenstein” Briefer, a Western strip which appeared in America in Hillman’s Dead-Eye Western Vol. 1 No. 8 (1950).

I cleaned up the original scans, blowing out the brown color of the pages to create a blackline copy. Working with others’ scans is a part of this job I like. 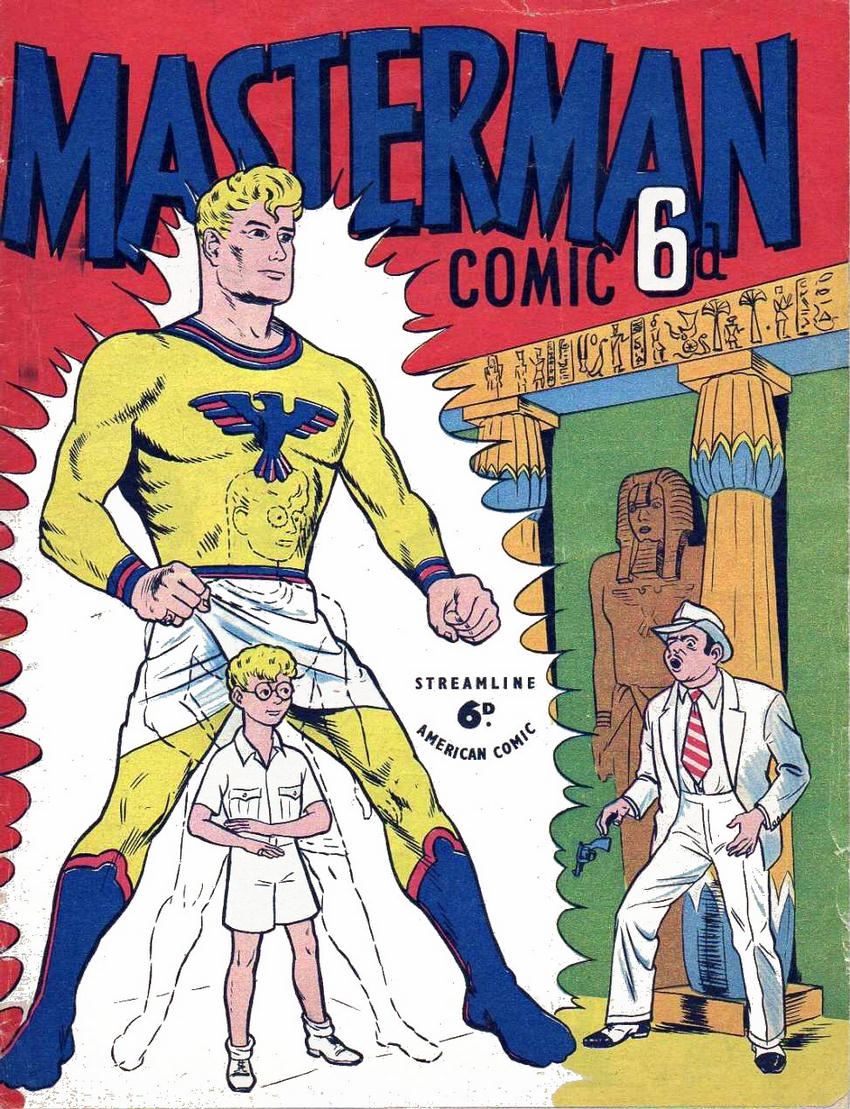 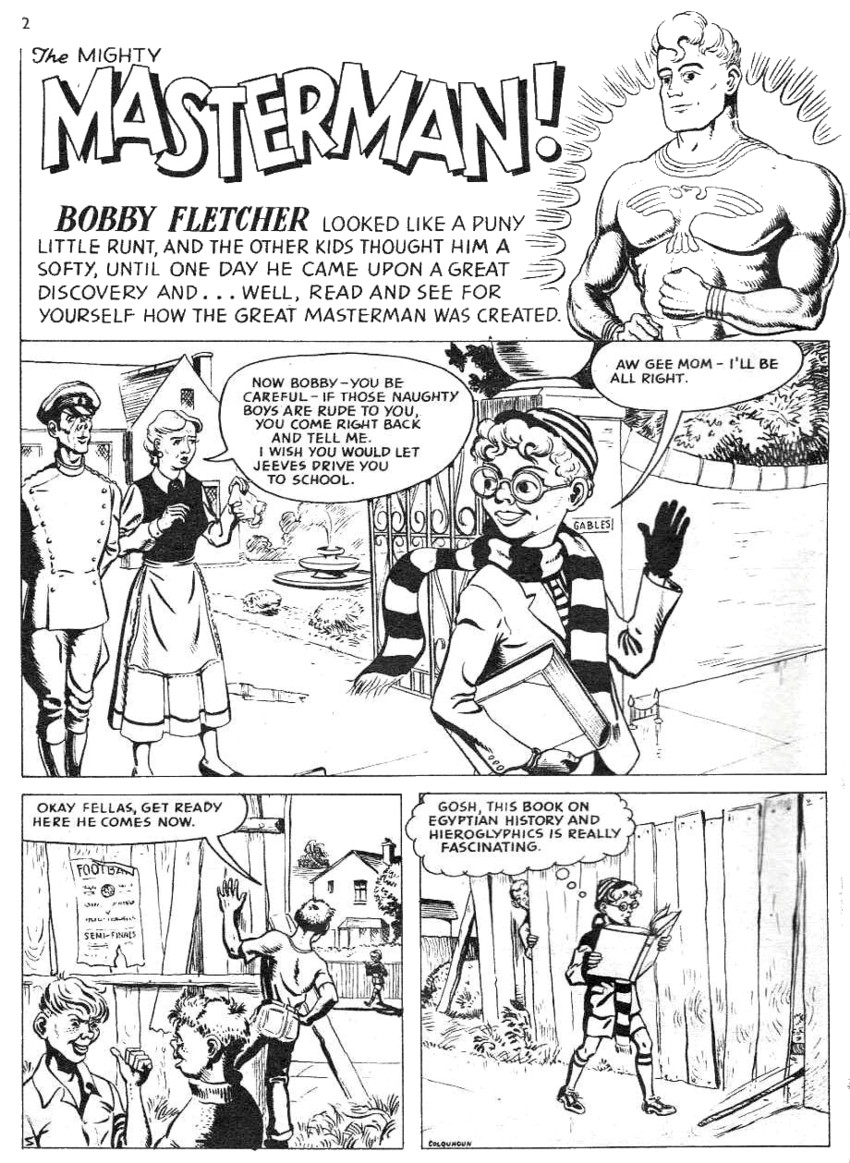 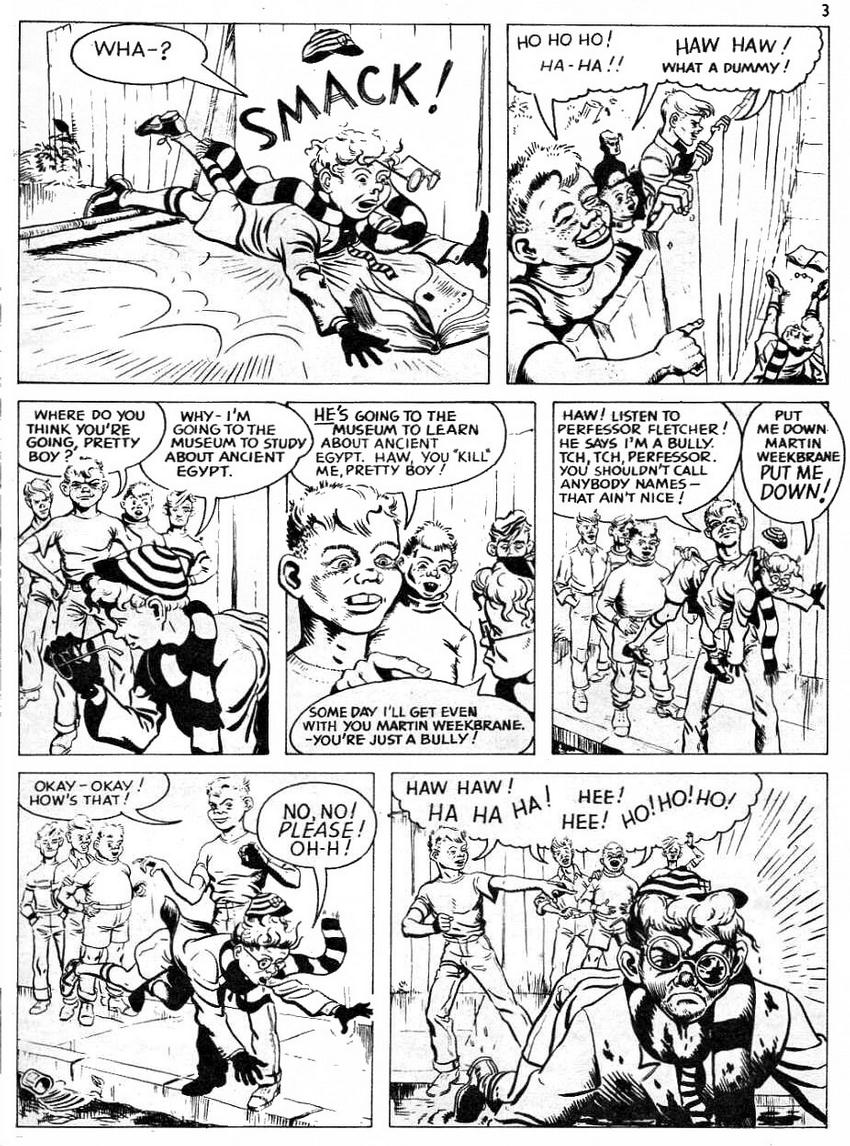 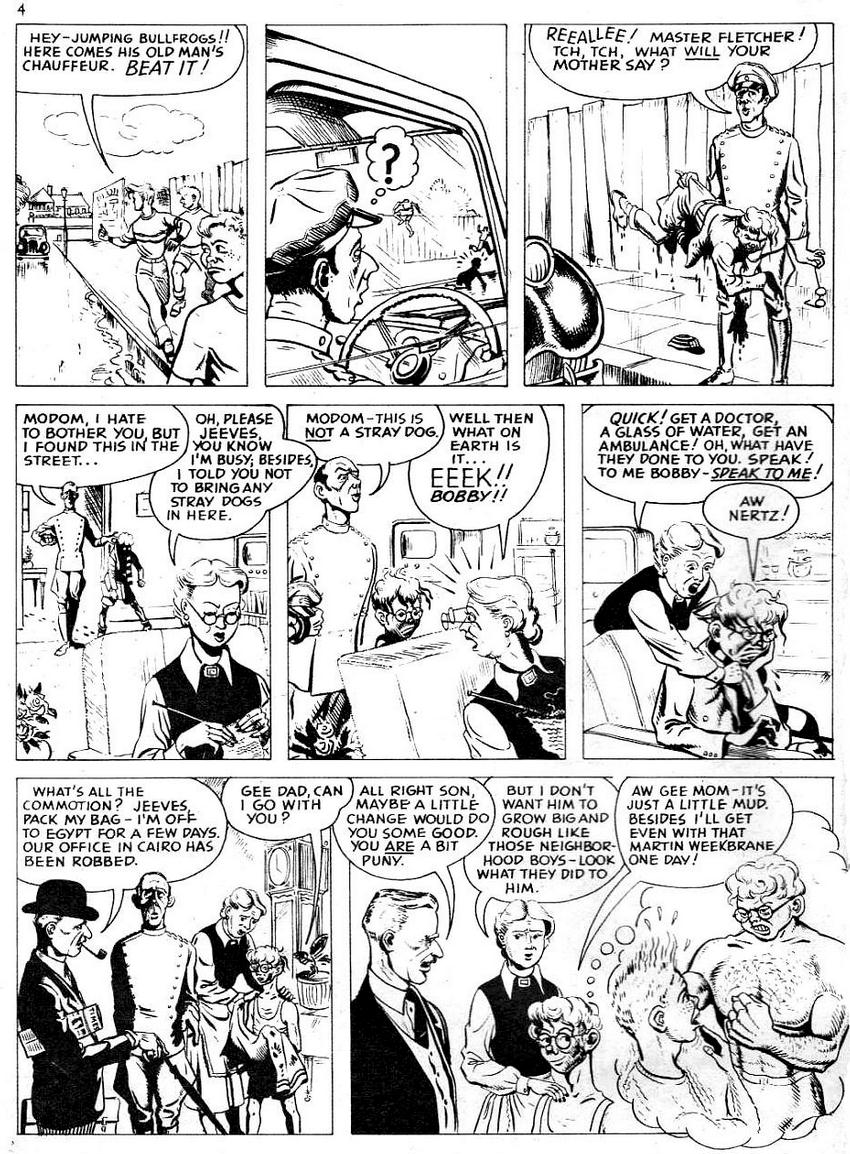 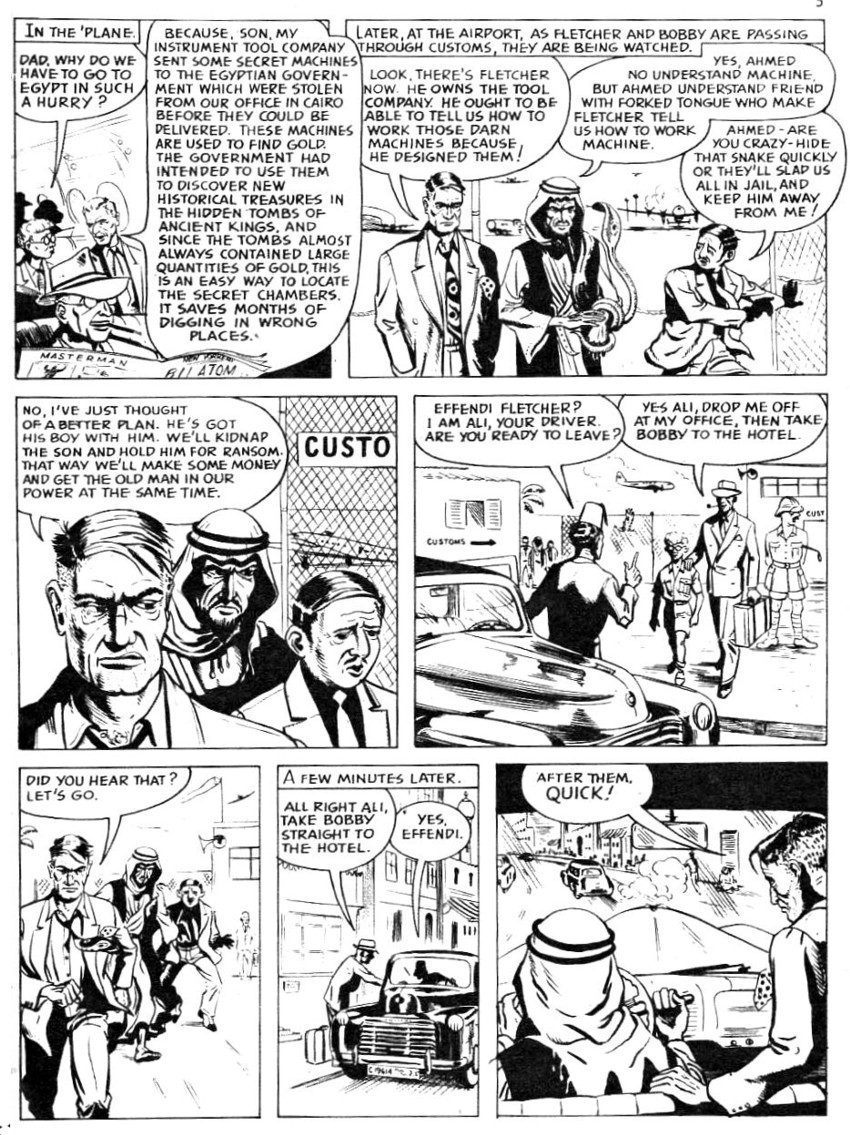 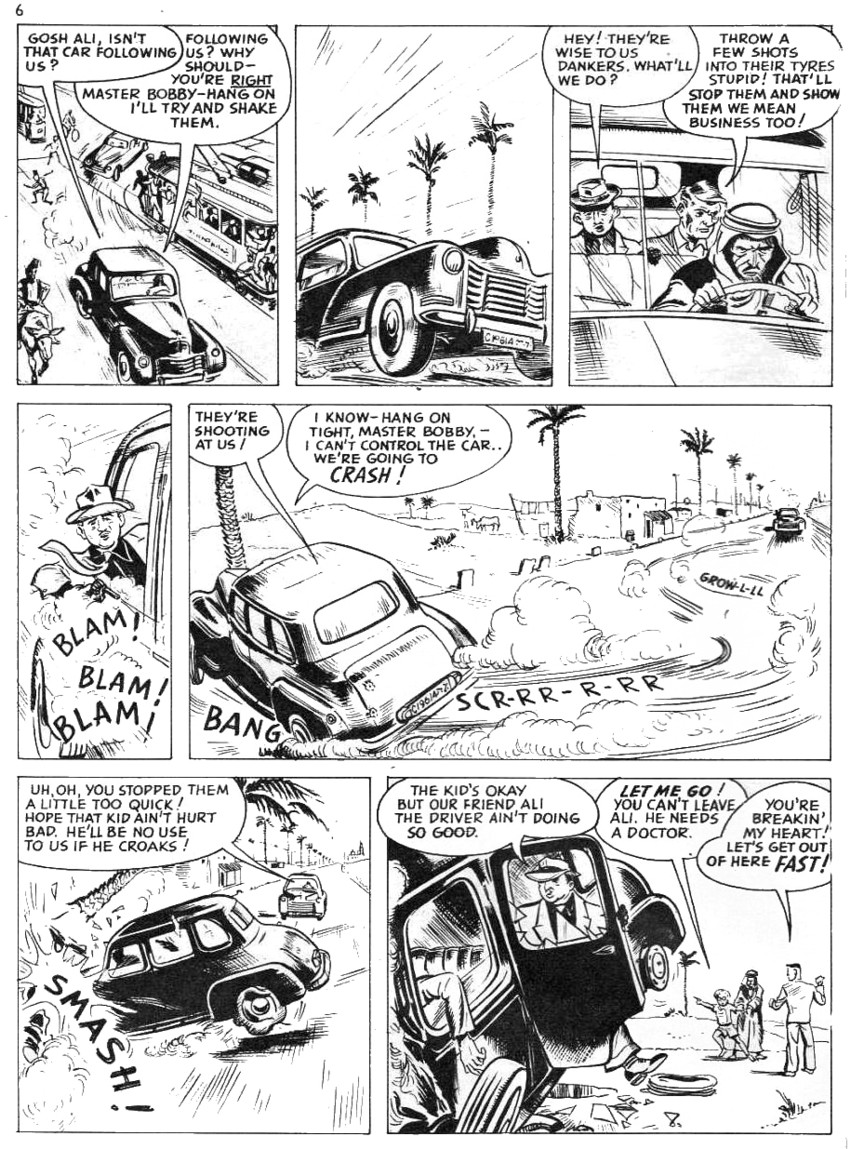 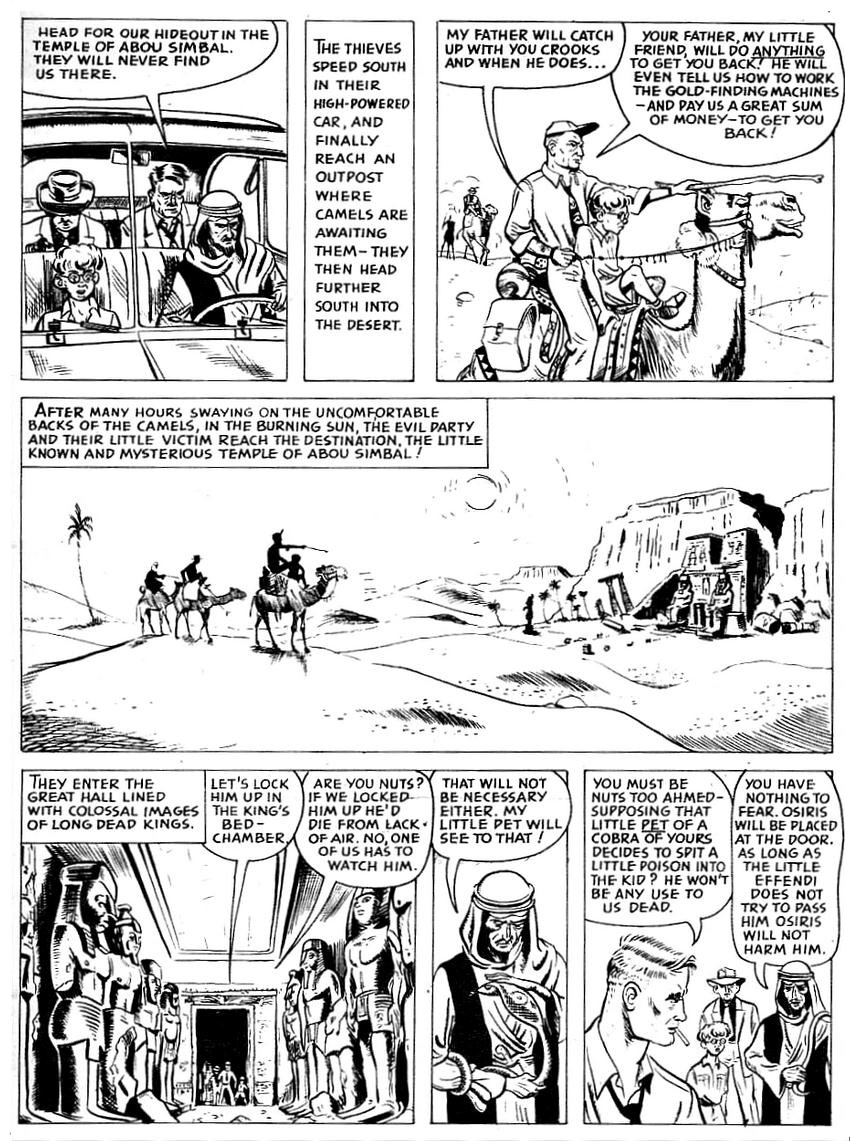 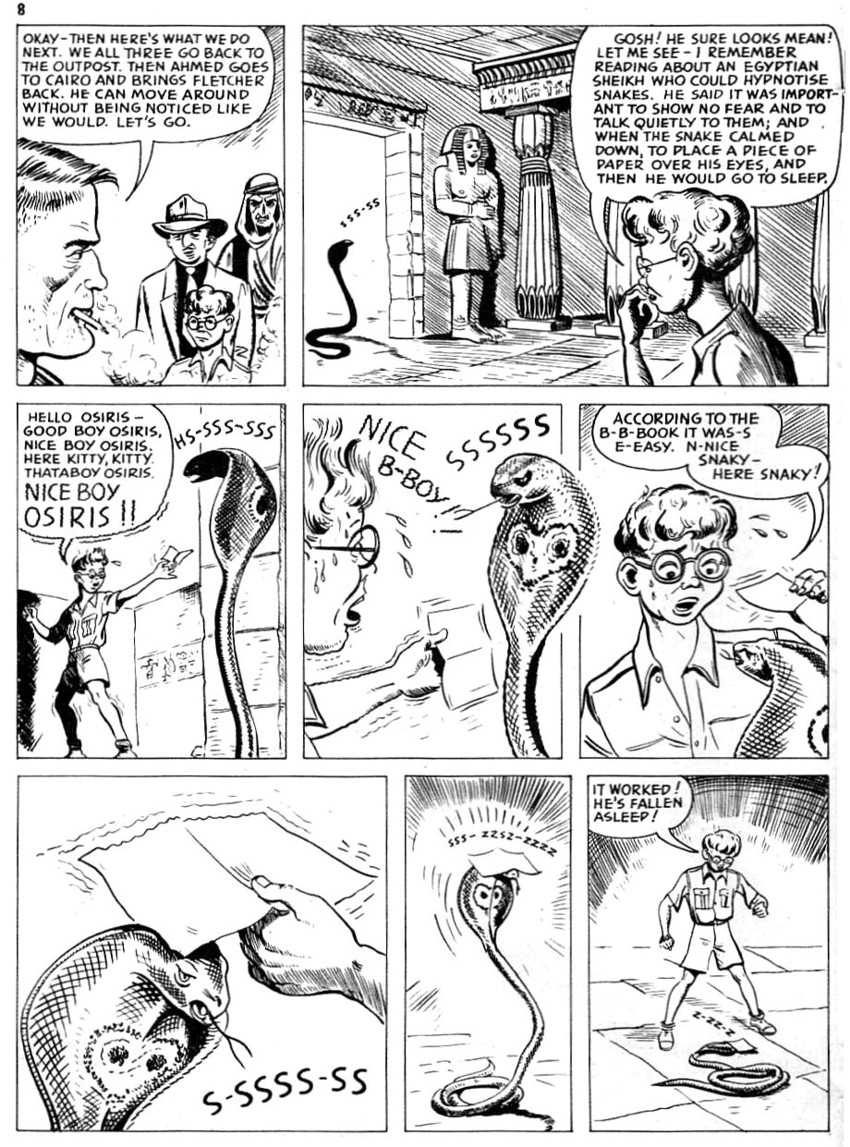 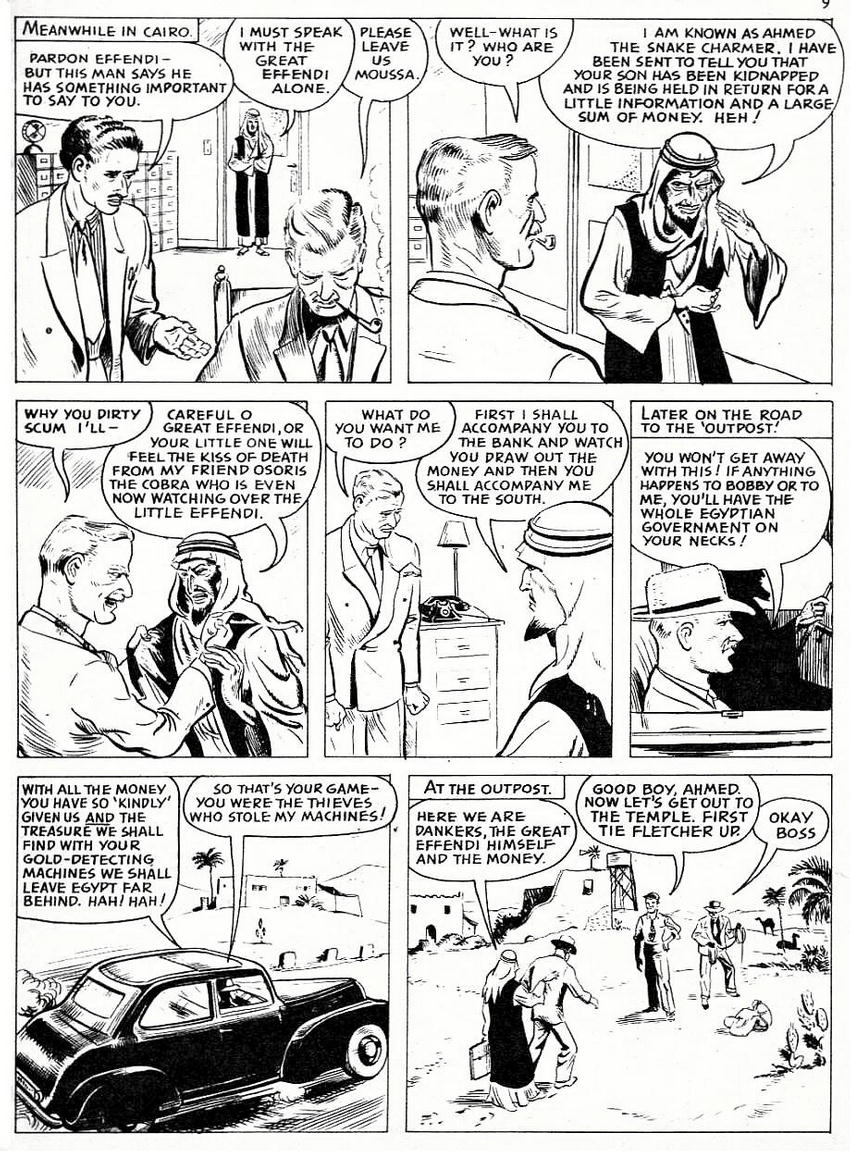 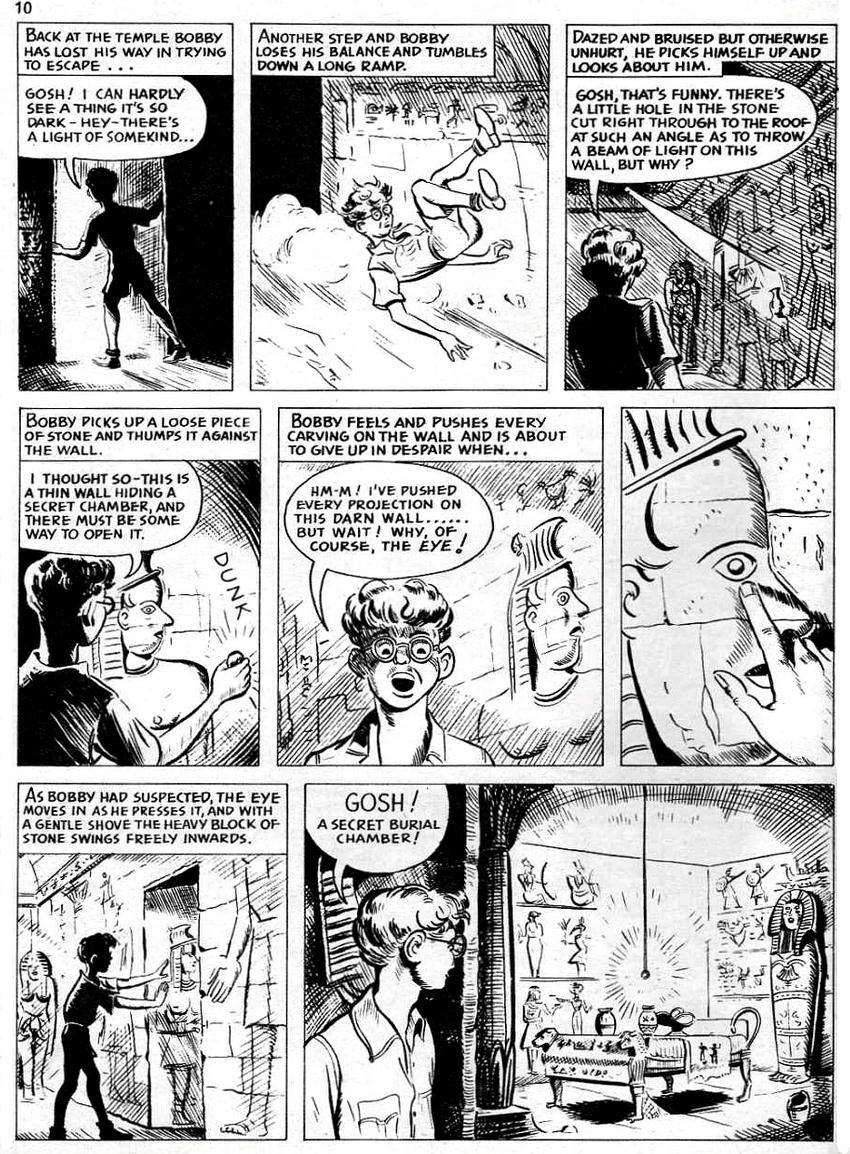 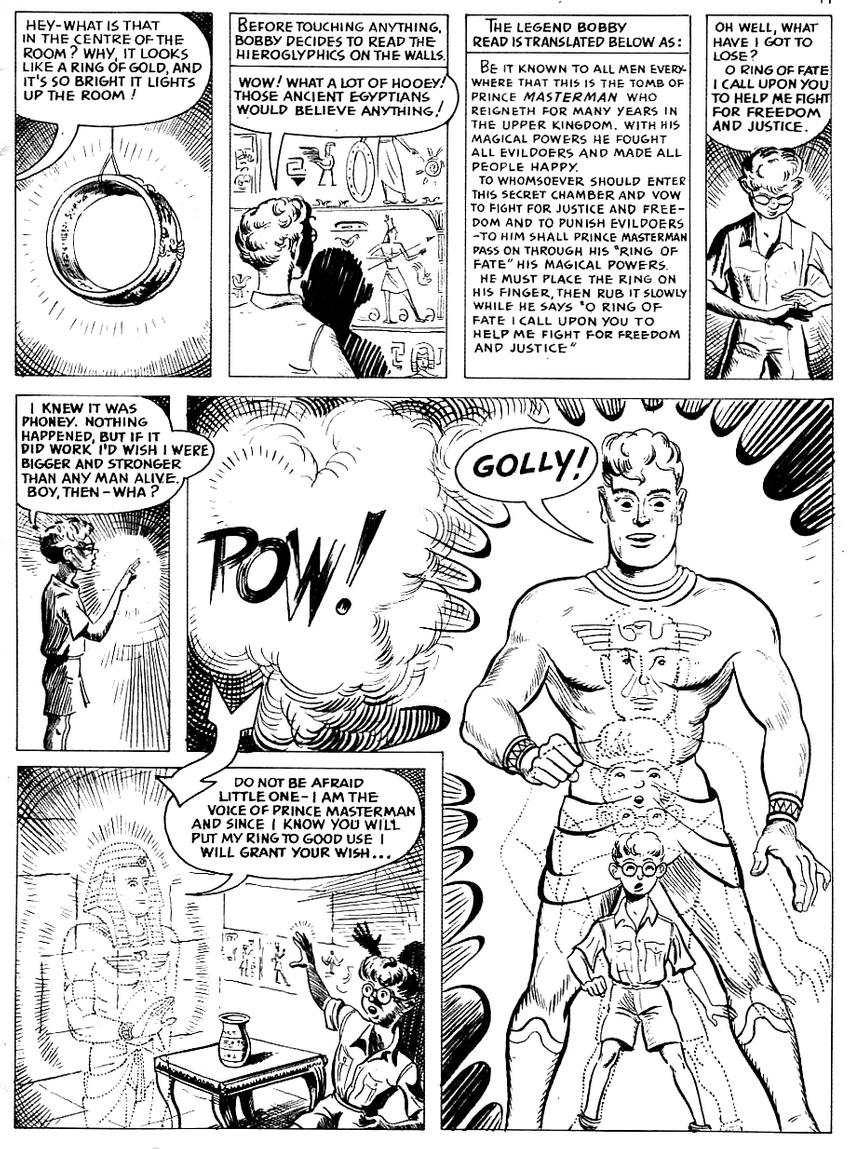 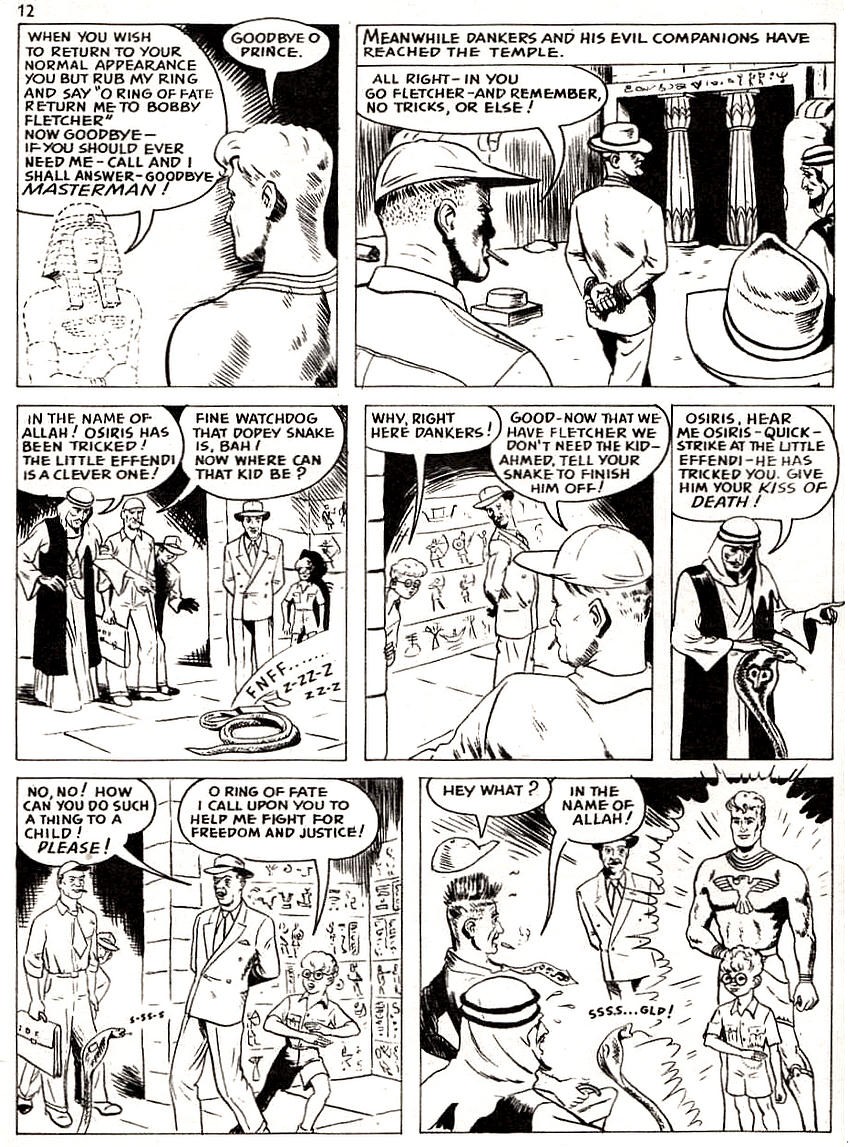 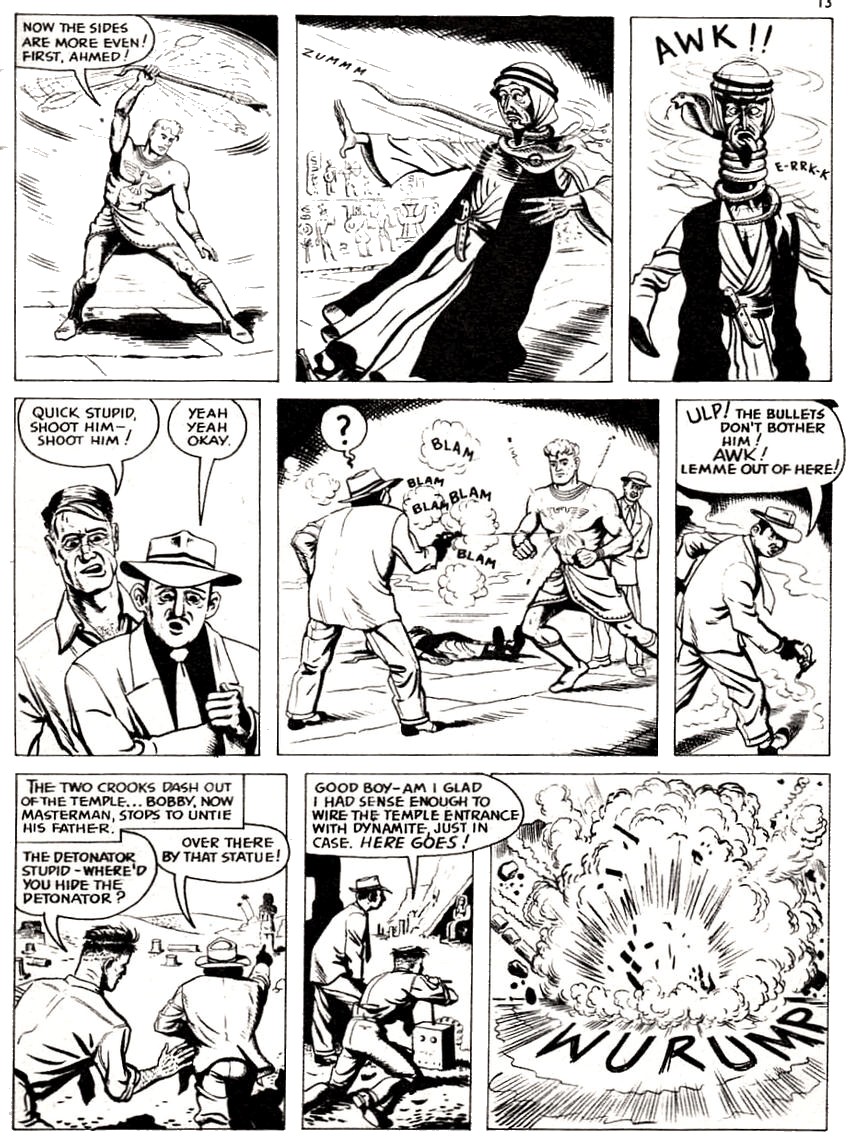 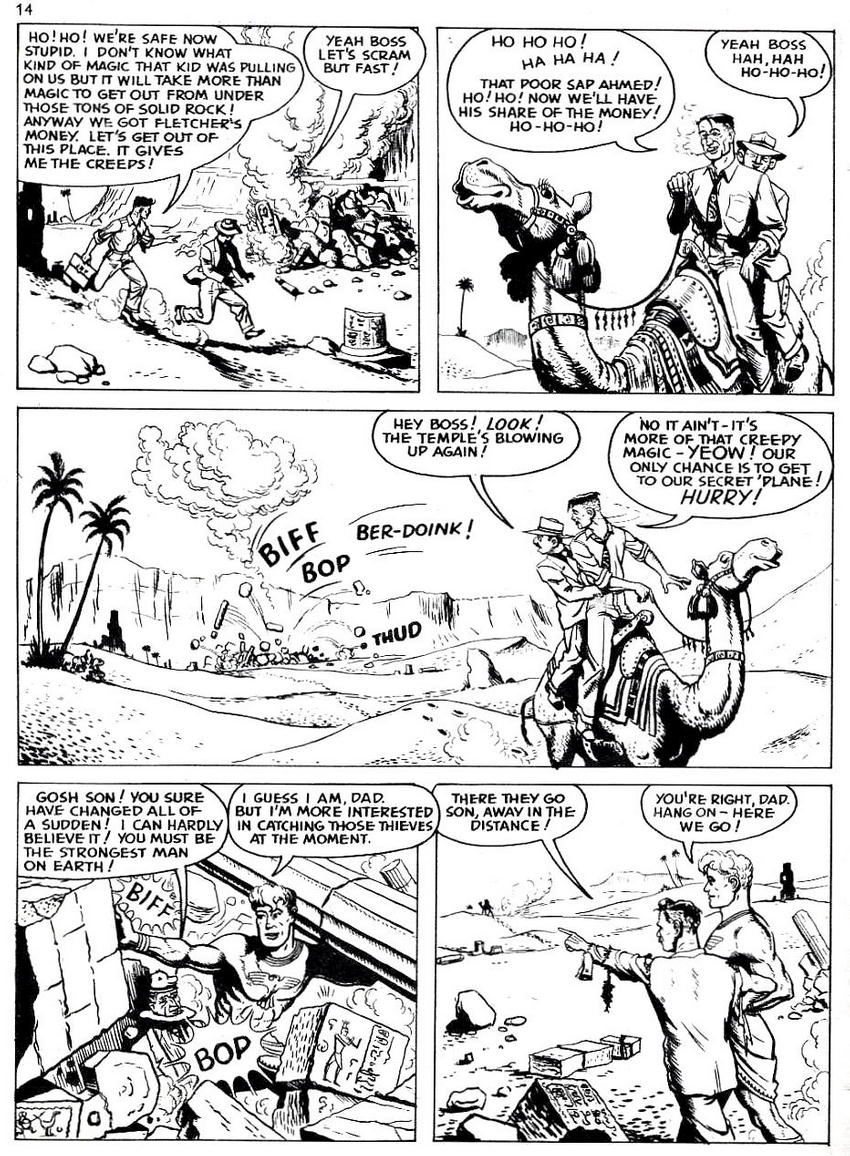 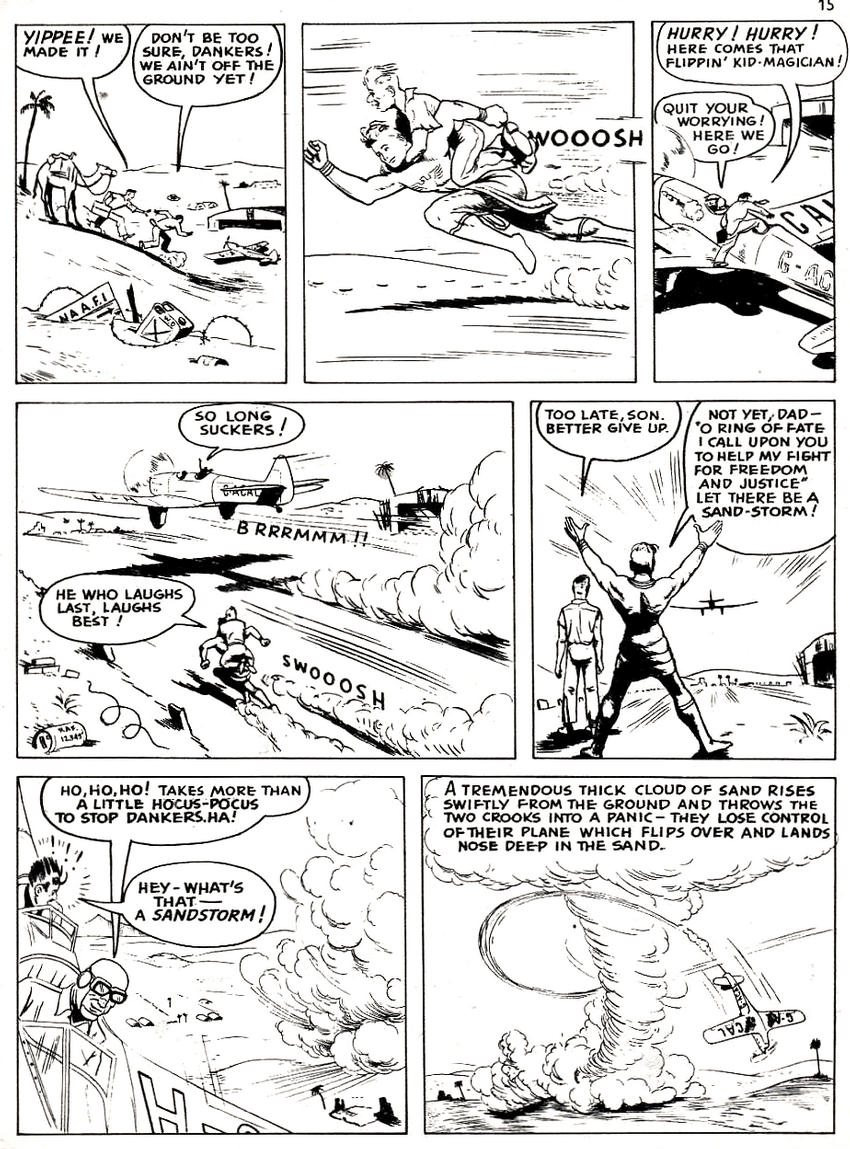 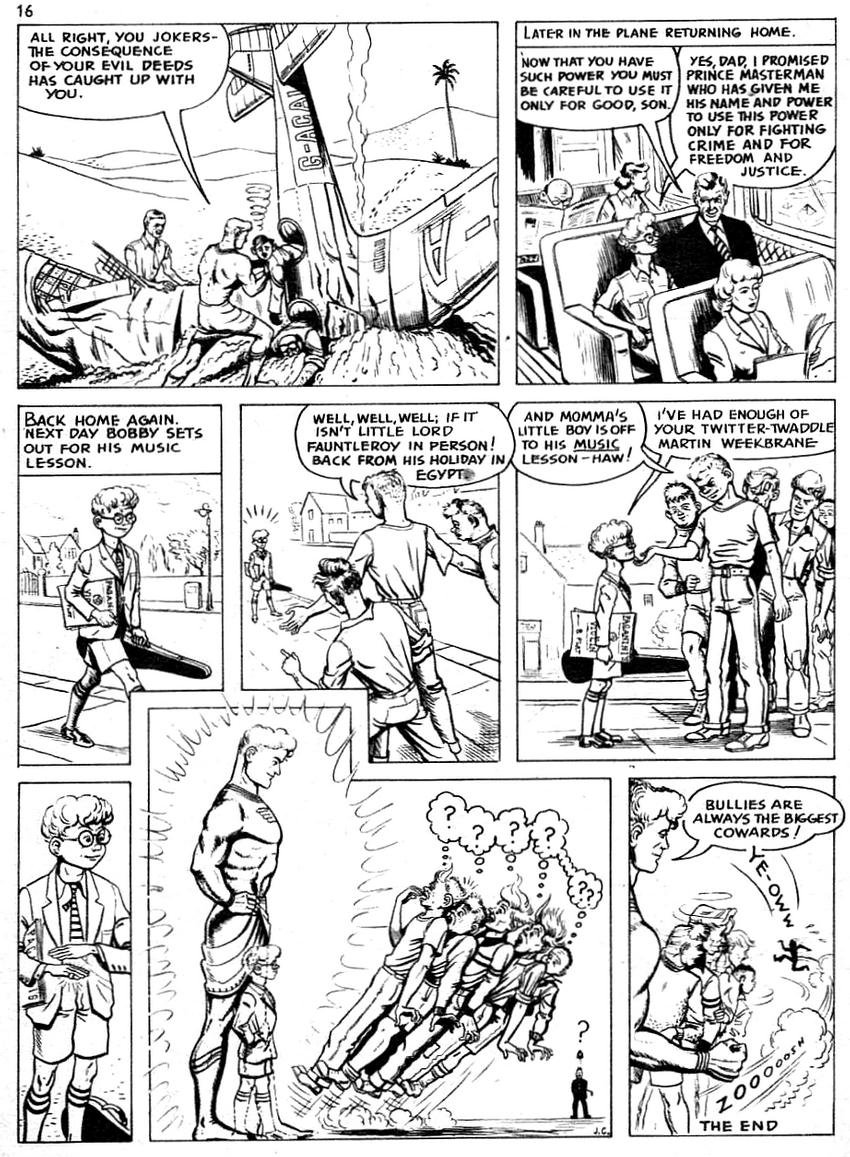 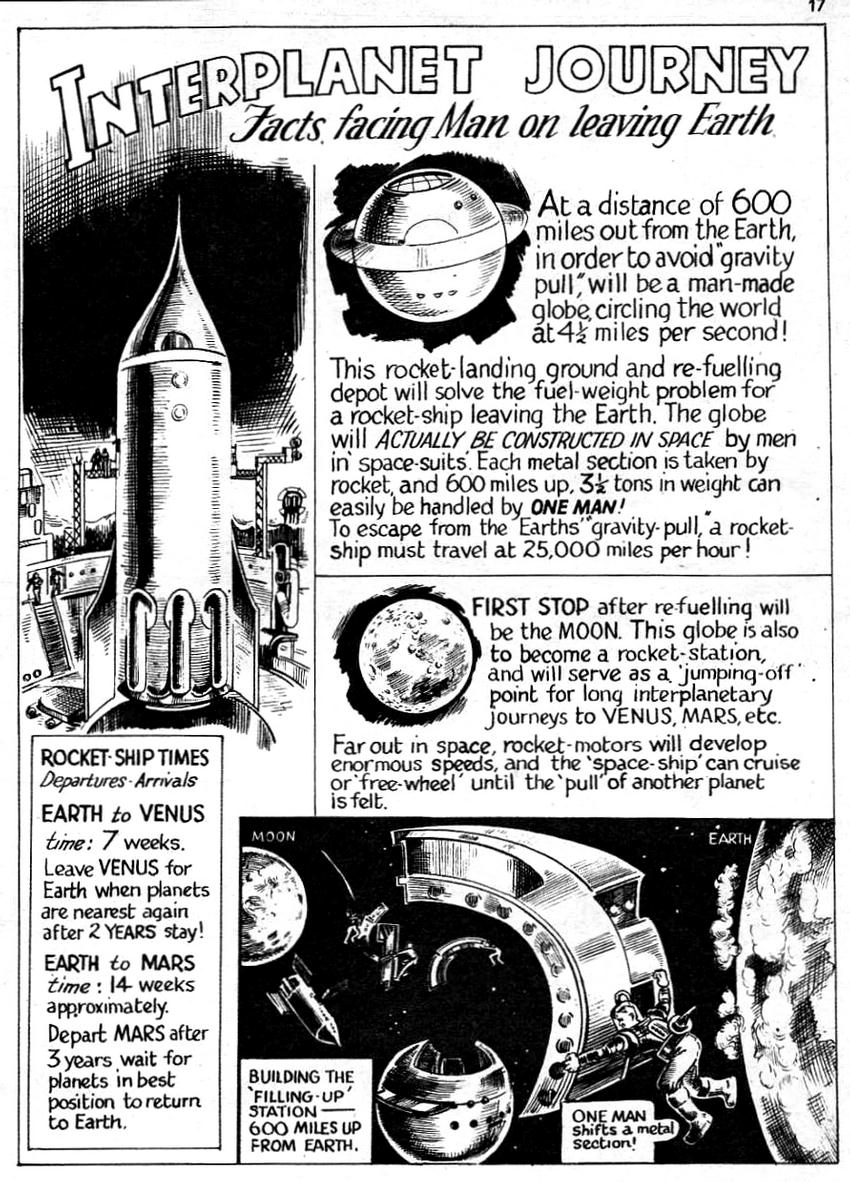 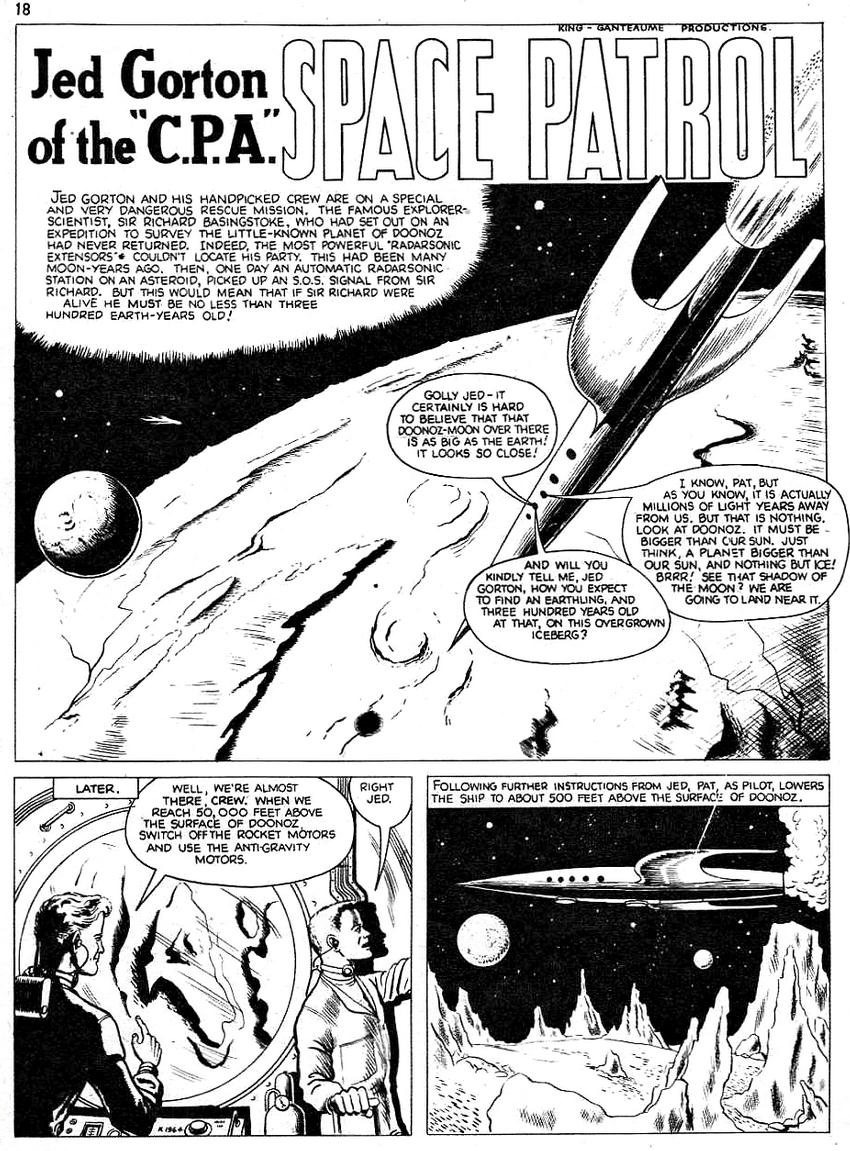 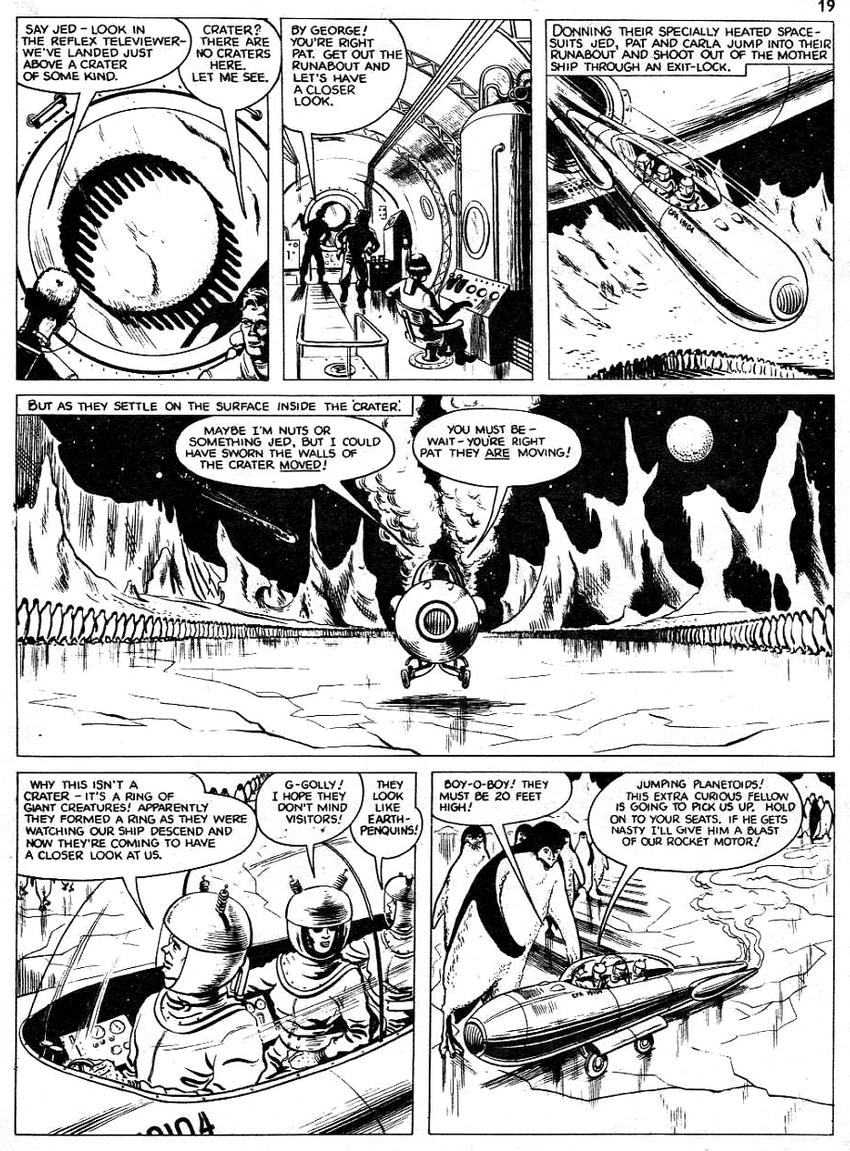 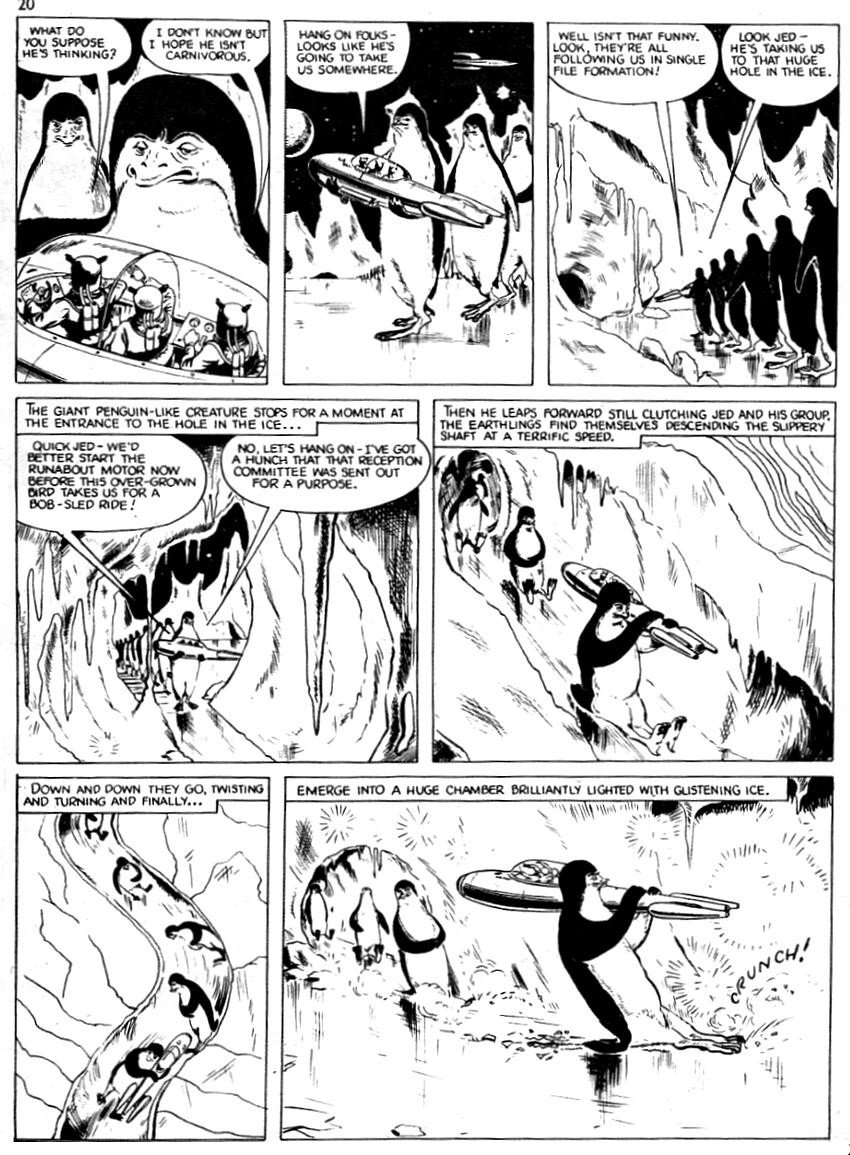 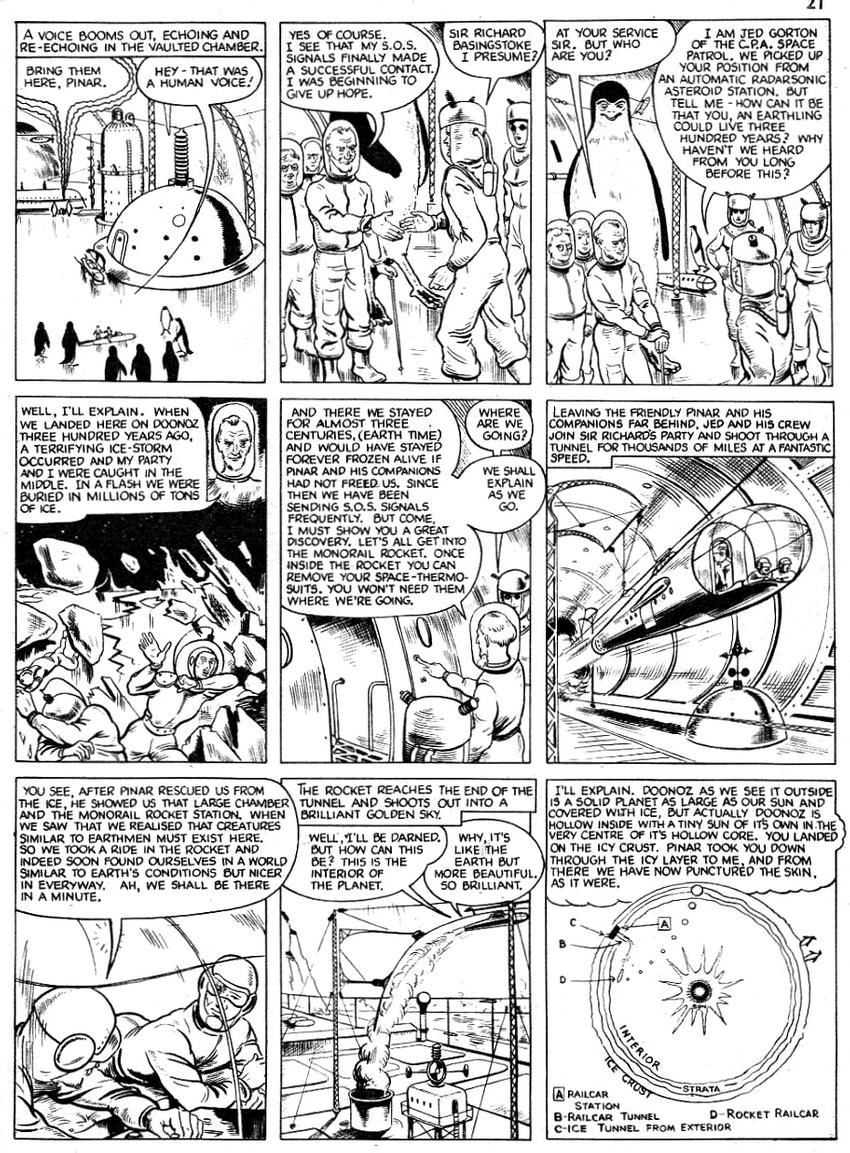 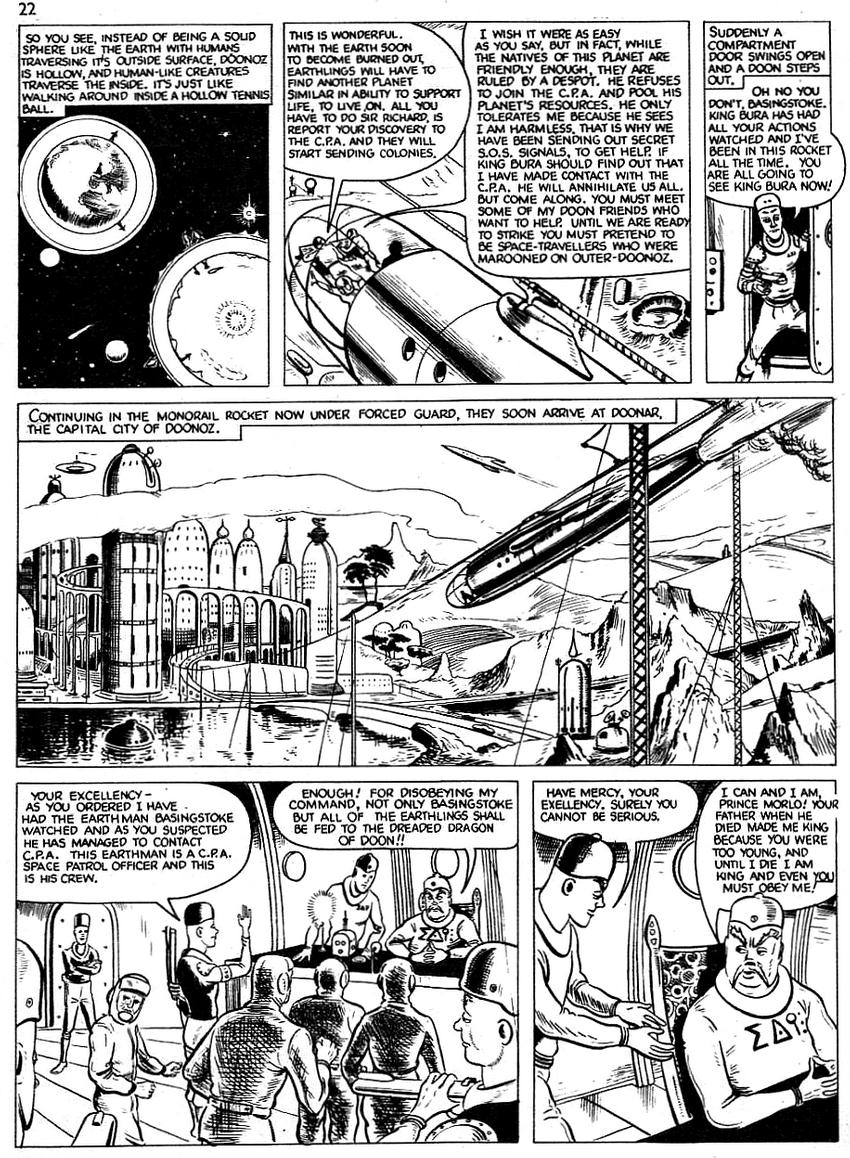 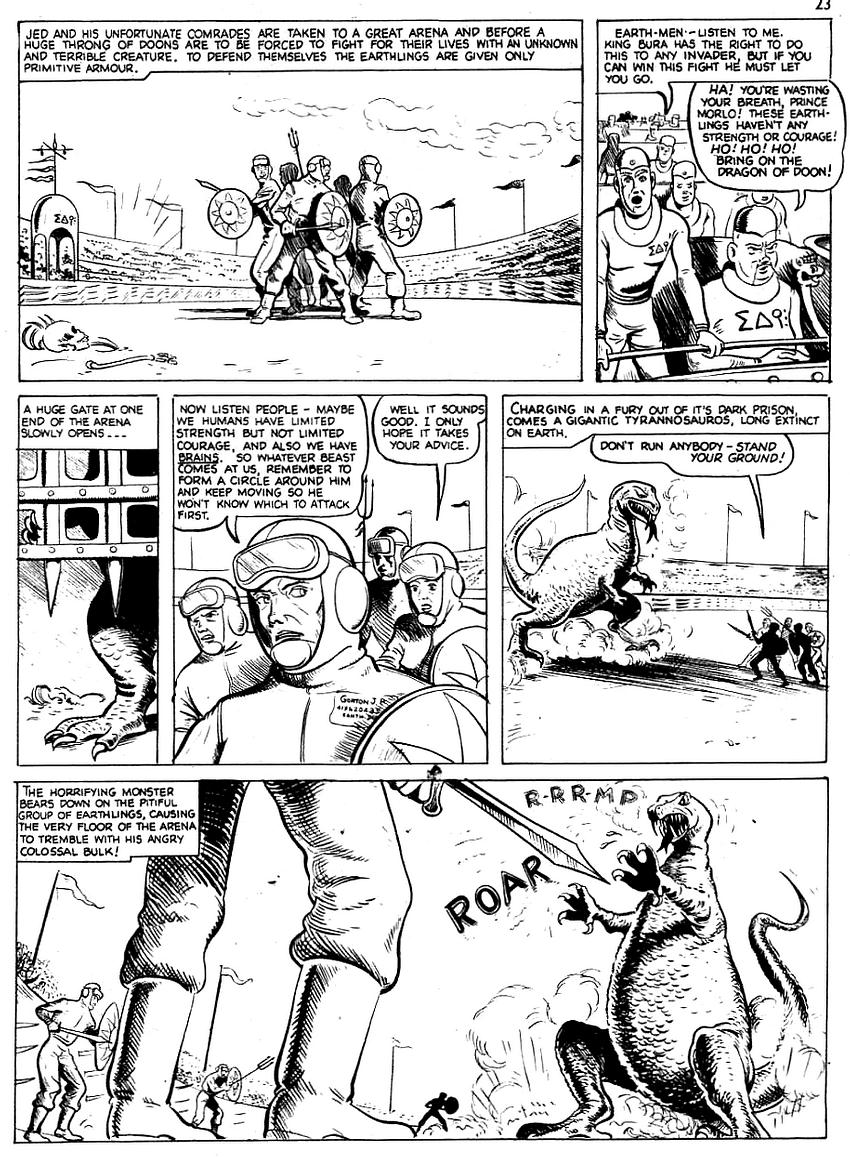 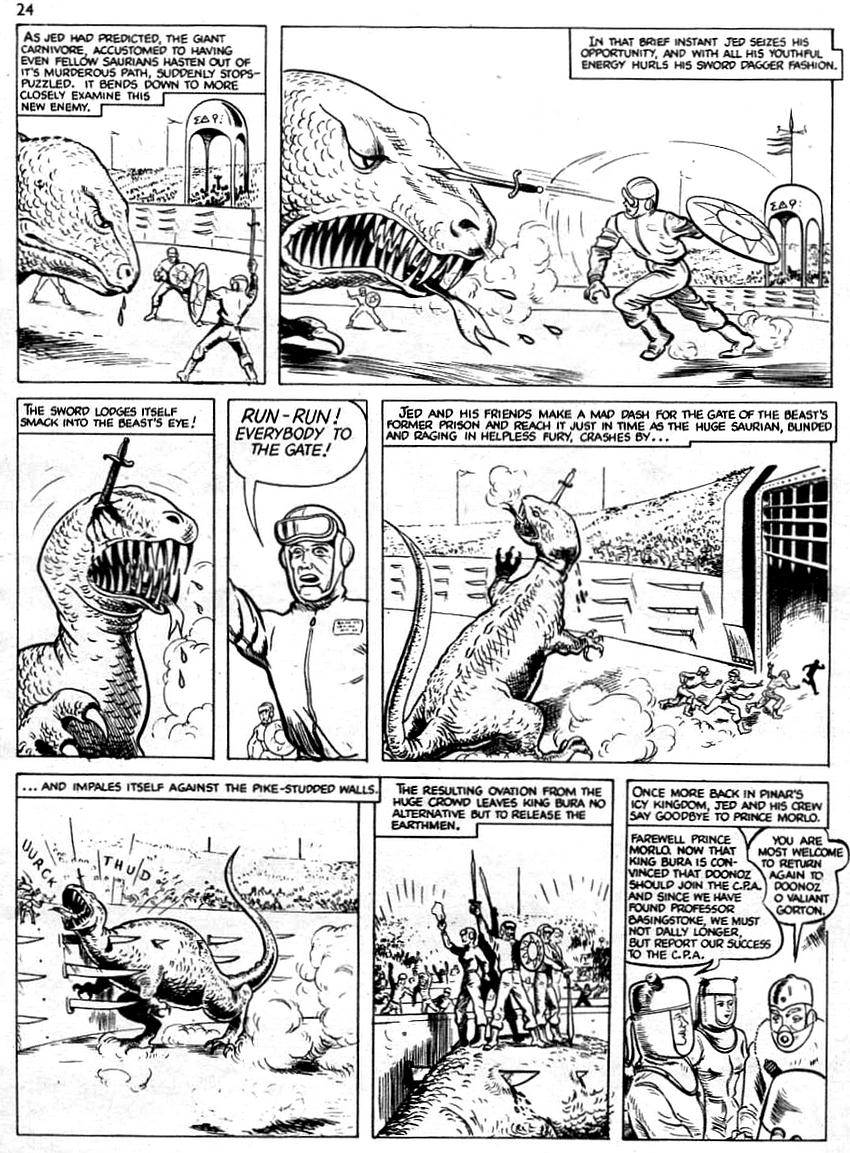 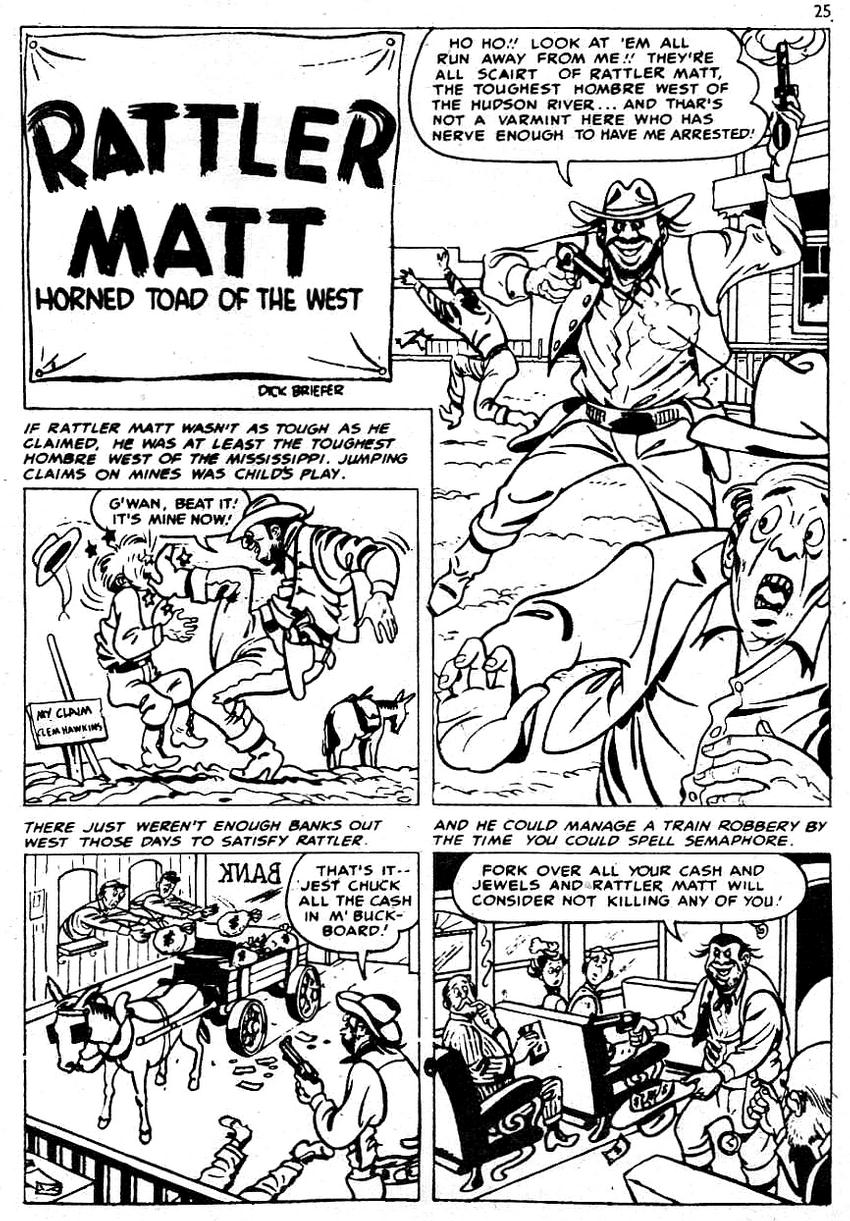 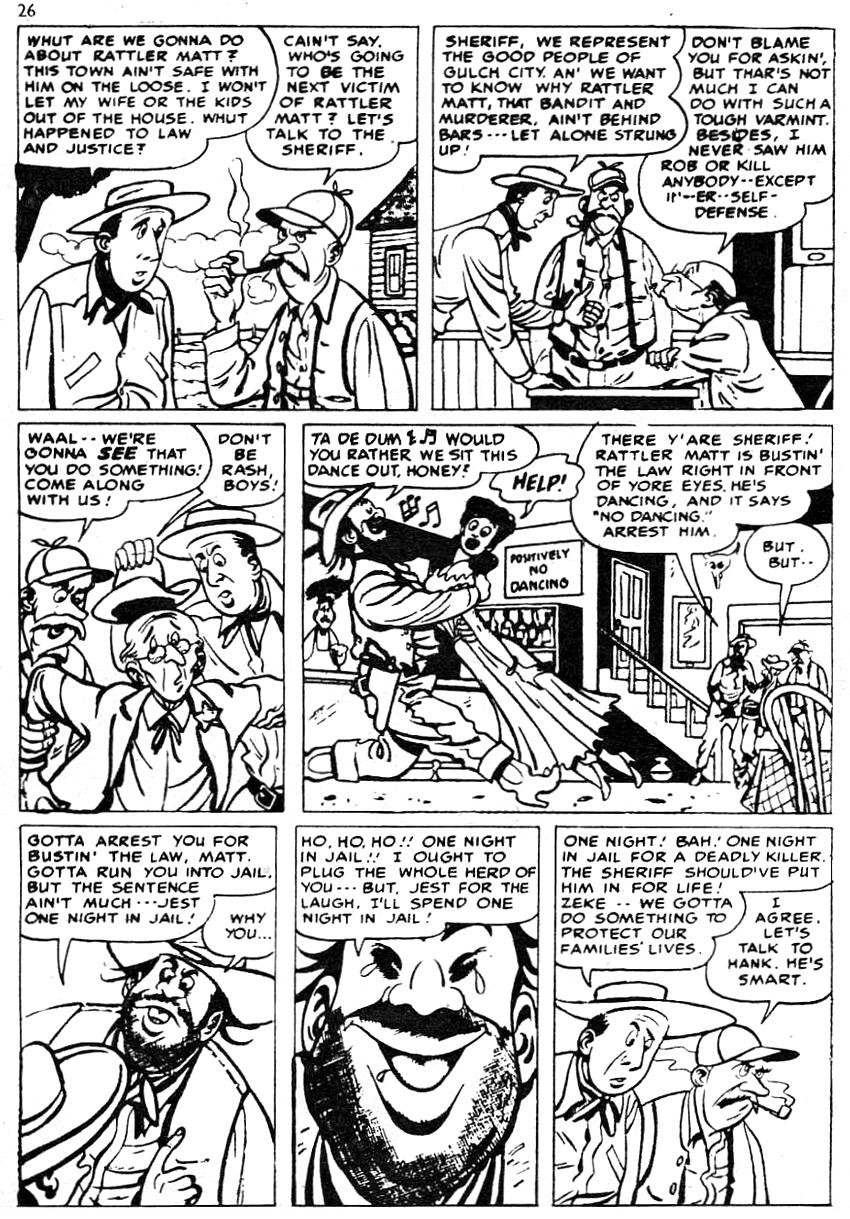 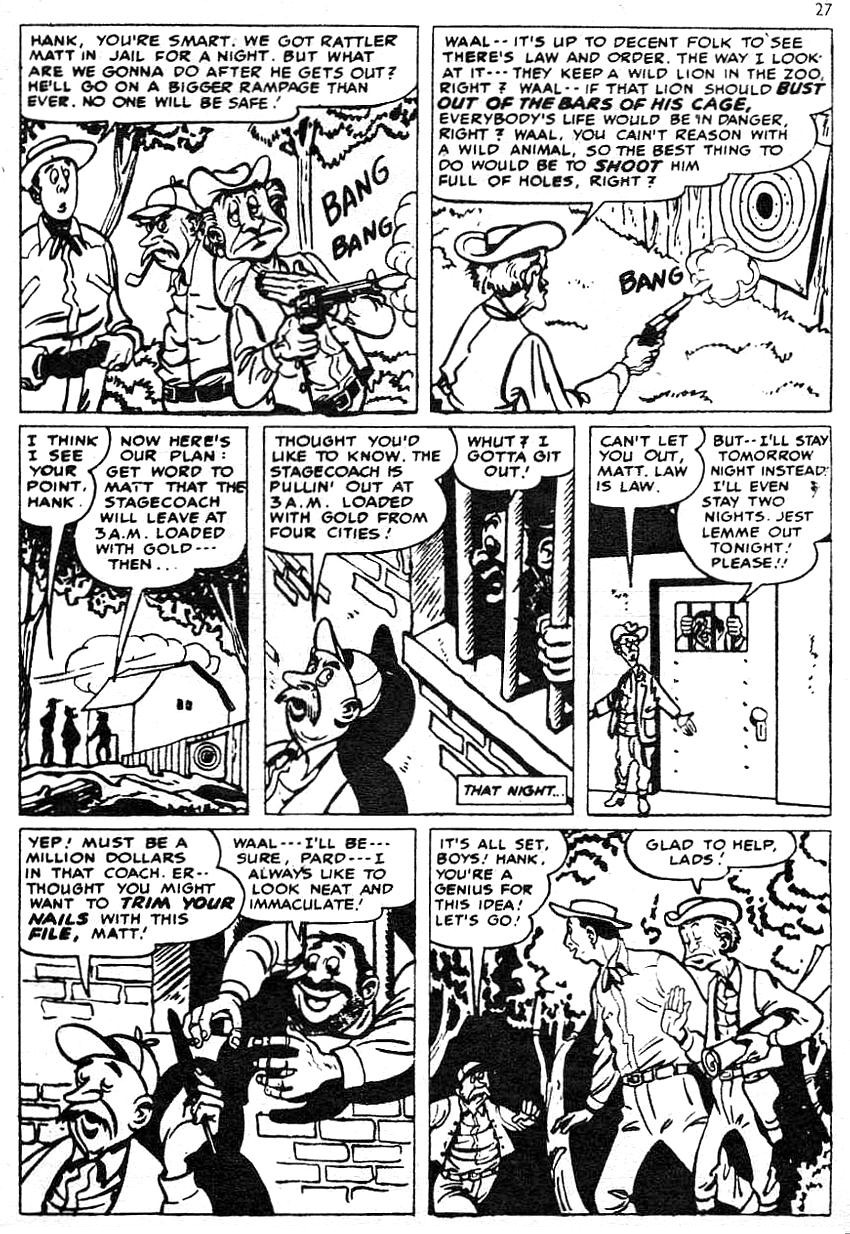 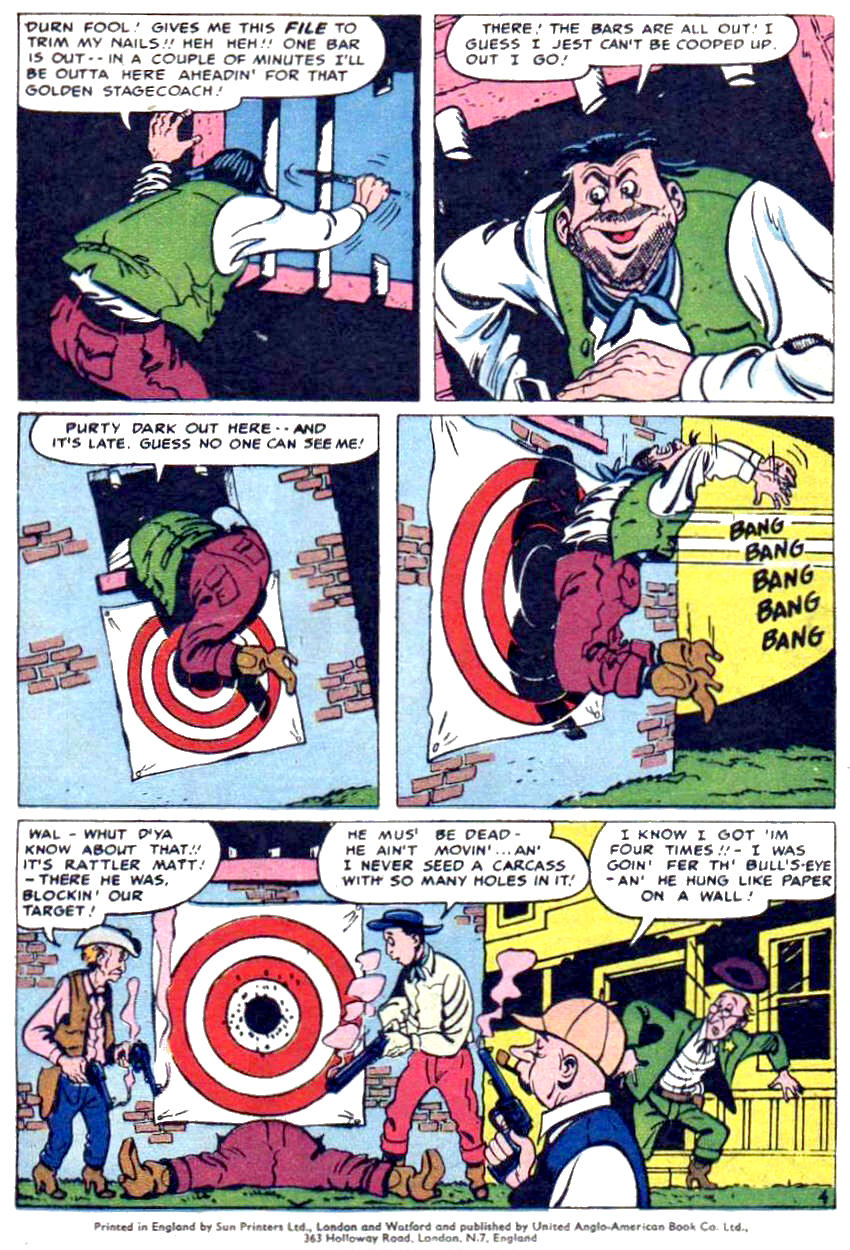 You don't like the Sci-fi story? I think it's fine, not as wordy as this comment, and very British, for at least 5 pages. Then it does get a little fuzzy with the annoying fat ruler of the Sigma-Delta-Qoppa Brotherhood.

I really dig the spaceships/suits, the camera angles, the "Hollow Earth" theory, the fact that Earth will soon become burned out so another place is to be found (a leit-motiv in Japanese toons 2 decades after), and especially the big "penguins" (thanks for turning the scans black & white, by the way). Let's face it, the Brits CAN create great aliens and nice space opera.

The ending is a let down of sorts, like a classic Star Trek story where Cap Kirk shows the skeptical aliens how wonderful is to join the Federation = CPA. And the name "Gorton" sucks. But we have Briefer.

I don't have much to say (thank heavens!) about first one, except that the boy doesn't feel the need for a secret identity. So much for an "American Comic". To me, this is definitely a more than decent English comic book.

Cor! There's entirely too much to criticize here!

Ah ha! I found a Britishism in the first story that gives away that it's not an American comic: the spelling "tyres."

The sci-fi story was very wordy, and the writer and artist obviously couldn't get together on showing and not telling absolutely everything. But the artist at least knew how to draw buildings and ships.

Is it just me, or was Matt's killing at the end of Briefer's story a bit much? Y'know...overkill?

Thank you, Pappy, for these swell scans. The first story could easily have been merely a smart kid vs. less-smart baddies (which with just a little care would have been a much better tale) but the super power route is a smile, anyway. Had to get through the requisite elements in so many pages for the kiddies, so the interior logic of the story doesn't get fussed with, sure.

I agree with J_D's assessment; the Jed Gorton space yarn I rather enjoyed. A few more pages and an ending balanced with the rest would have made it better. It shows what a lot of comics show: that putting together a good story in a set amount of pages is tricky. Low pay, deadlines and a "just for kids" attitude made for the sloppy heroics often presented. But we love those, too —maybe even more for it, at times.

So my big lesson -heh- from these old comic books: take life more like a goofy comic book. Forgive much and laugh a lot. Our lives might be knit together better than a Carl Barks duck story but we just don't have the perspective. Tends to look more like the hack jobs but, who knows?

What a whacky Briefer story! Sincere thanks, Pap.

Sure, it's a lift, but the snake around the neck is just a great imagine, and would be something you'd see in Captain Marvel.

One thing that's interesting about most of the Marvel rip-offs is it retains the one thing I always liked; the kid, even when he's a kid, is pretty crafty. He gets himself out of one situation -- the snake -- using only his wits.

"Masterman" was (according to Denis Gifford) produced by the King-Ganteaume shop, which put out another fake "American" comic, "Electroman," who looked more like Captain Marvel than even Marvelman.
The art on the Masterman story is signed "Colquhoun" - whether it is an early effort by Joe Colquhoun, who did excellent work in the '60s and '70s, I don't know.
The writer had a good grasp of American slang and spellings (except for "tyres" at one point), but the artist slips a bit in that regard: though the cars (except for the one driven by the butler) have left-hand drive, and drive on the right, they have wide number plates like British cars.

rnigma, because the story wasn't meant for U.S. audiences, it probably didn't seem that critical that it be 100% "American." I thought maybe the publishers were trying to get away with an American comic without having to pay a reprint fee to an American publisher.

7f7, so I have two votes from you and J D that the science fiction story is fine, and one from Ryan who agrees with me that the story is wordy.

Does anyone like those monster penguins? Has a giant penguin ever figured into a story before? I think it is a first for me.

Brian, you mention something that maybe hasn't been discussed before...how the kid part of the boy-to-adult superhero transition is himself smart.

I always wondered about poor Billy Batson, though. He got thumped on the noggin and knocked out many times while in his non-super state. I wonder if his concussions caused problems later in life, like they do for football players.

@Daniel: Oi, c'mon, Guv'nor... give these guys a chance! Joe Colquhoun (yes, it's him) improves his art greatly and does some great war stories later. And those birds are cool! Looks like the King-Ganteume studio is a sort of mistery even for the English. I found these, but don't help a lot:

I'd really like to know who the authors of the Penguin story are. Maybe some British mate can help.

Daniel, thanks for the links. I am familiar with "Charley's War," but didn't realize it was the same artist.

"Bob's reminiscence mentions the possibility that he drew 'Marvelman', although I think this unlikely... instead, I offer you another possibility: 'Masterman'. And the Americans that Bob met were not Bailey and Souster but Kenneth King and Malcolm Ganteaume, although the King-Ganteaume agency did also supply strips to a number of Len Miller's comics. He may also have been, contemporarily, working for Bailey-Soustar on comics published by Sports Cartoons / Man's World. If this is the case, Peaty would have been in good company as these two agencies had such talents as Joe Colquhoun, Jim Holdaway, Syd Jordan and Philip Mendoza on their books."

Darci, this opens up a whole other area I'm not familiar with. I appreciate your research on this.

I guess Ill have to say it...MASTERMAN looks like its made for a Marvelman style retcon....no,not another project Zarathustra...lets just say the new past would come from Mastermans real appearance...A STORM like alteration suggesting like Masterman is BLACK...in place of the bird symbol on his tunic, something on his jade necklace. And none of that cartoony thing as we saw...say that Masterman is a reality manipulator-and as time passes, Mastermans personality becomes more and more unlike Billy...Just had to offer that...

Hi Pappy, I’ve been a long time admirer of your blog, but never commented before. I’m working on a Joe Colquhoun book at the moment (a personal project with the possibility of future publication). I’m tracking down much of Joe’s published work but
finding these early books extremely hard to find, and was wondering if you would be so kind as to send me your scans for possible use in the book? Of course i’d be mucho grateful and give you a credit in the book (if and when it comes out, I may even be able to send you a copy). My email is danrachael73@icloud.com if you wanted to Dropbox or we transfer me the files.
Regards.