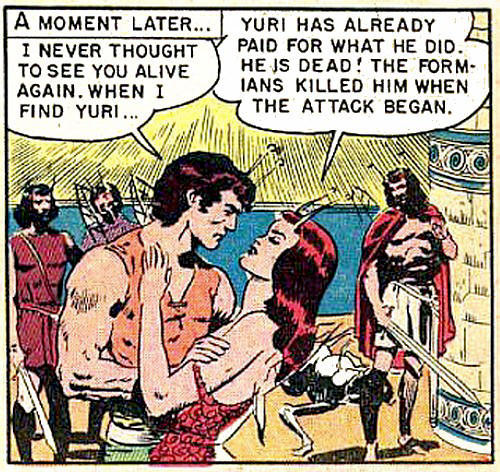 Over 100 years ago when Edgar Rice Burroughs created his Mars novels starring John Carter, they made a major impact on twentieth century fantasy fiction. I read all of them in the late fifties and early sixties, and also the Burroughs-inspired novels of authors like Otis Adelbert Kline and Ralph Milne Farley.

Which brings us to An Earthman On Venus, written as a novel by Ralph Milne Farley in 1924 and published as The Radio Man. Avon adapted it to this one-shot comic, well illustrated by Wallace Wood, in 1951. They also released the novel under its new name as part of their paperback line. 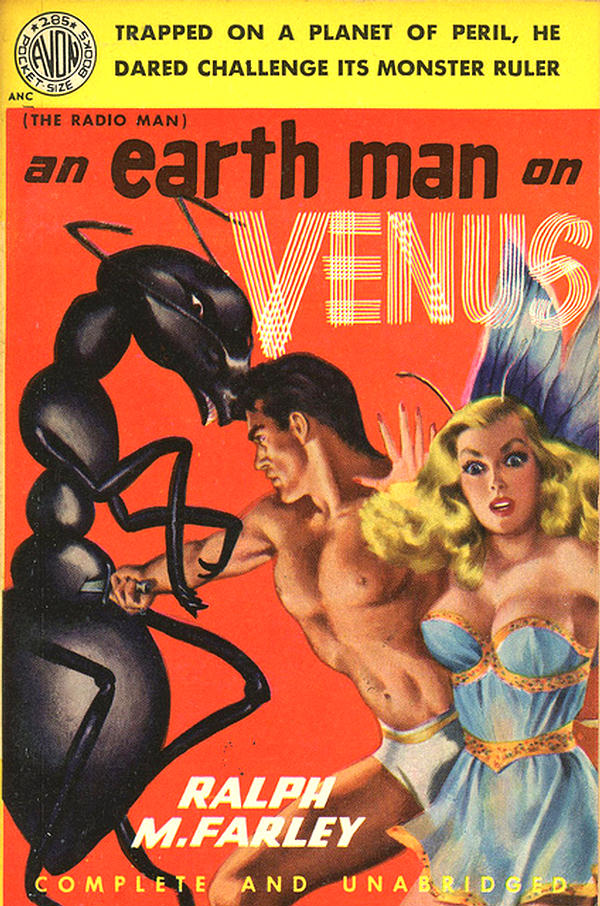 Ralph Milne Farley was the pseudonym of Harvard educated lawyer, Roger Sherman Hoar, who wrote pulp novels when not publishing books under his own name, like The Tariff Manual or Unemployment Insurance in Wisconsin. In choosing what to read, I'd much prefer a far-flung space opera/fantasy over a book on unemployment insurance laws. 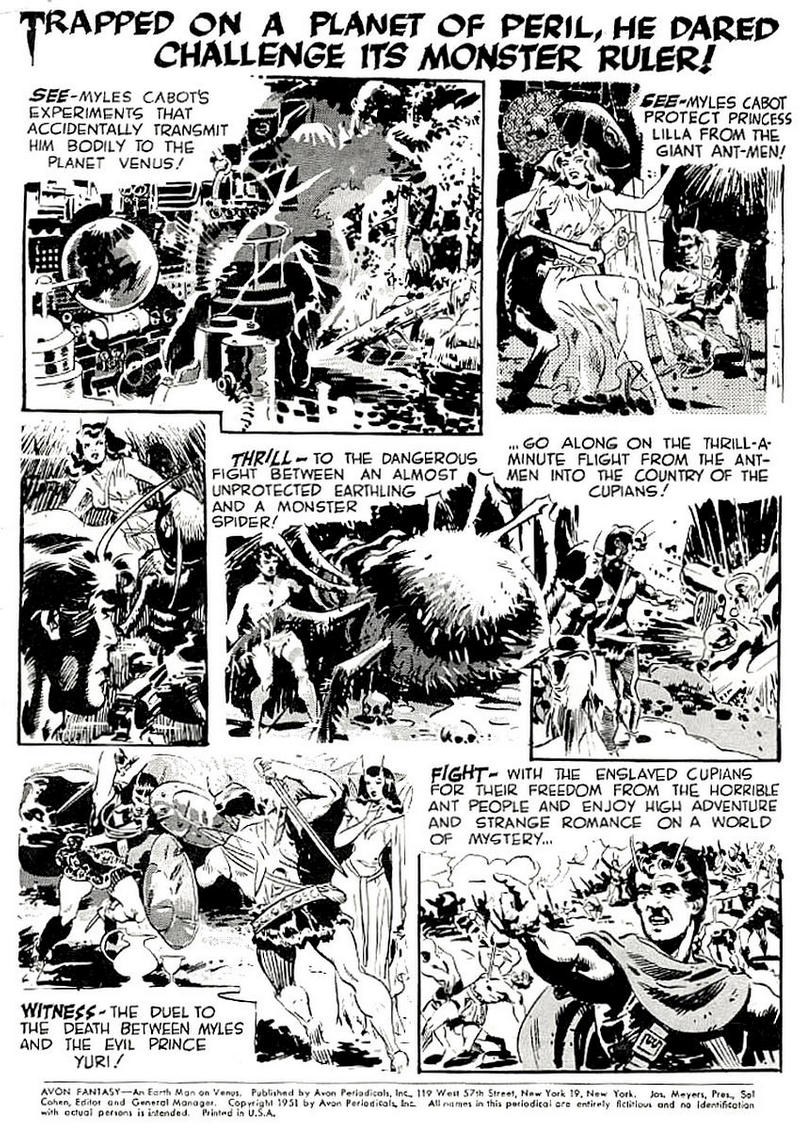 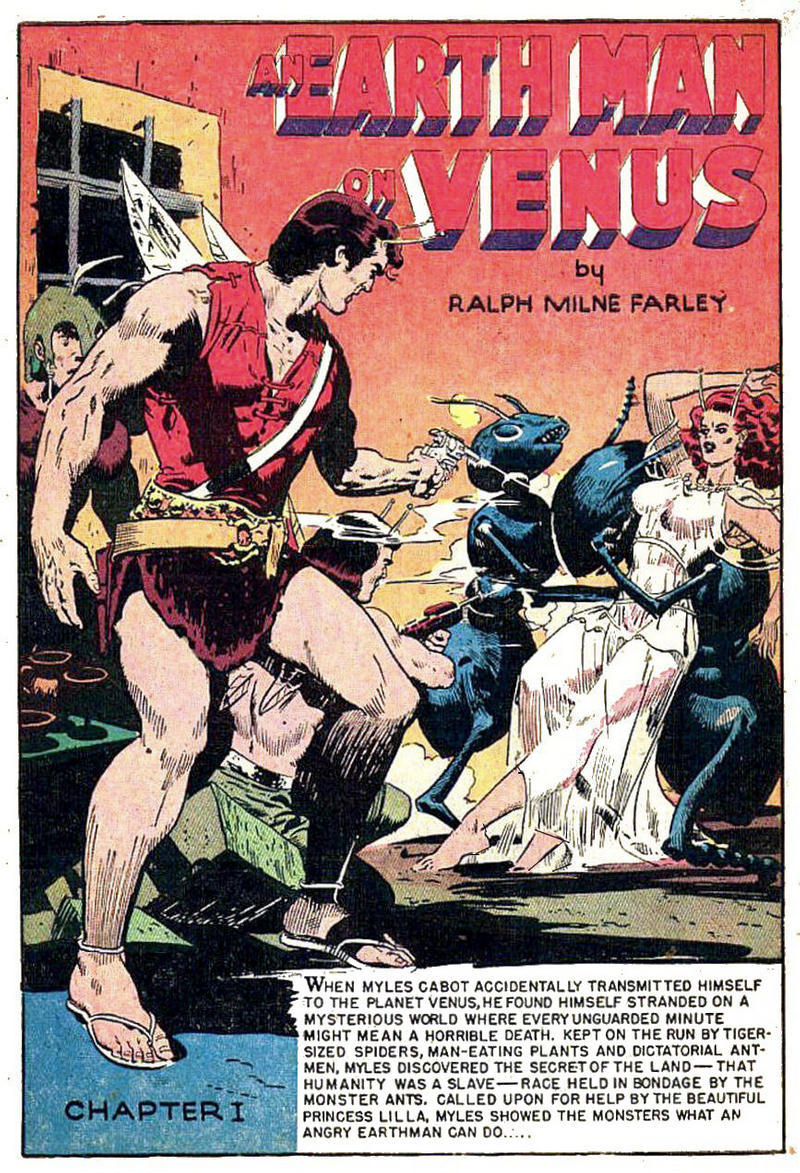 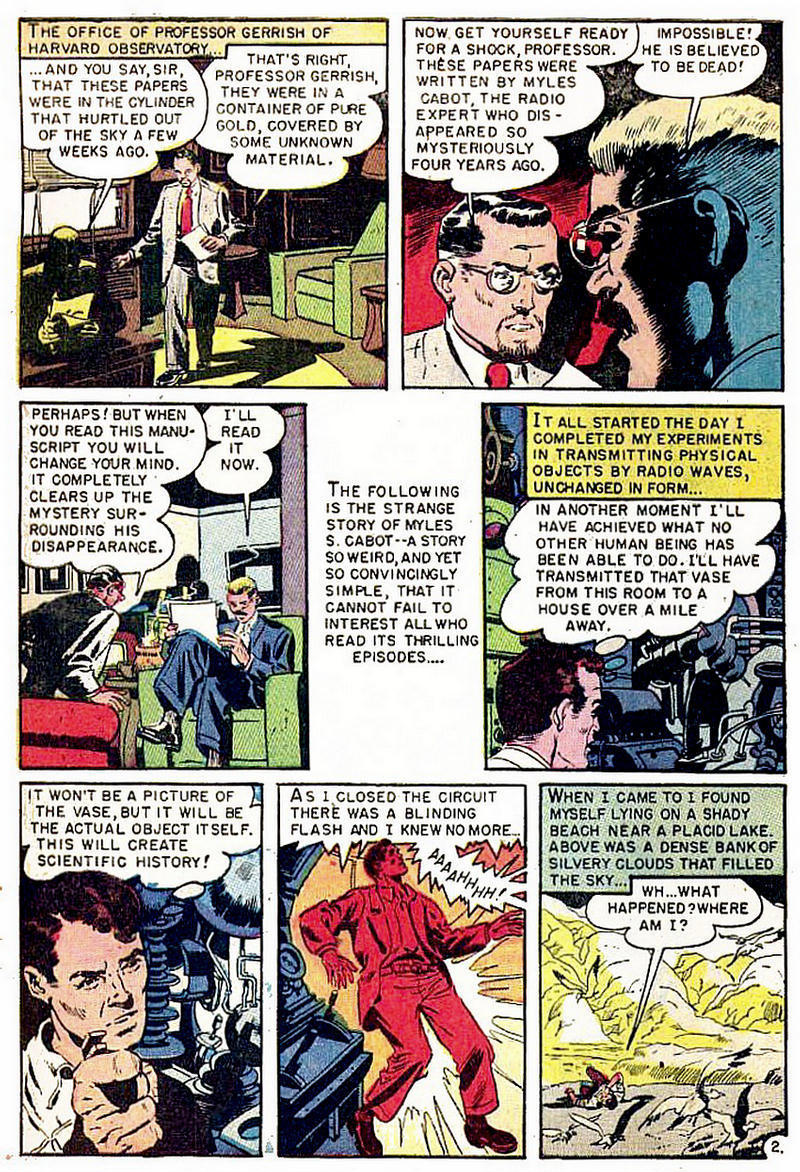 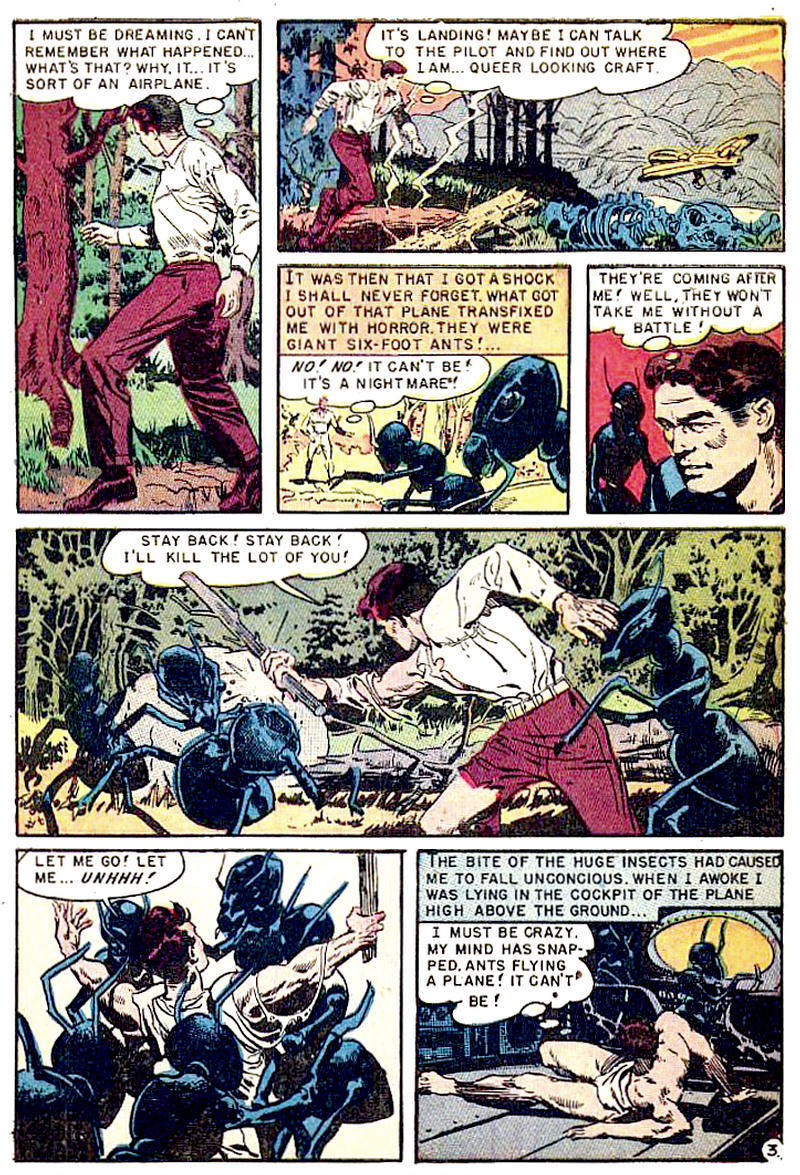 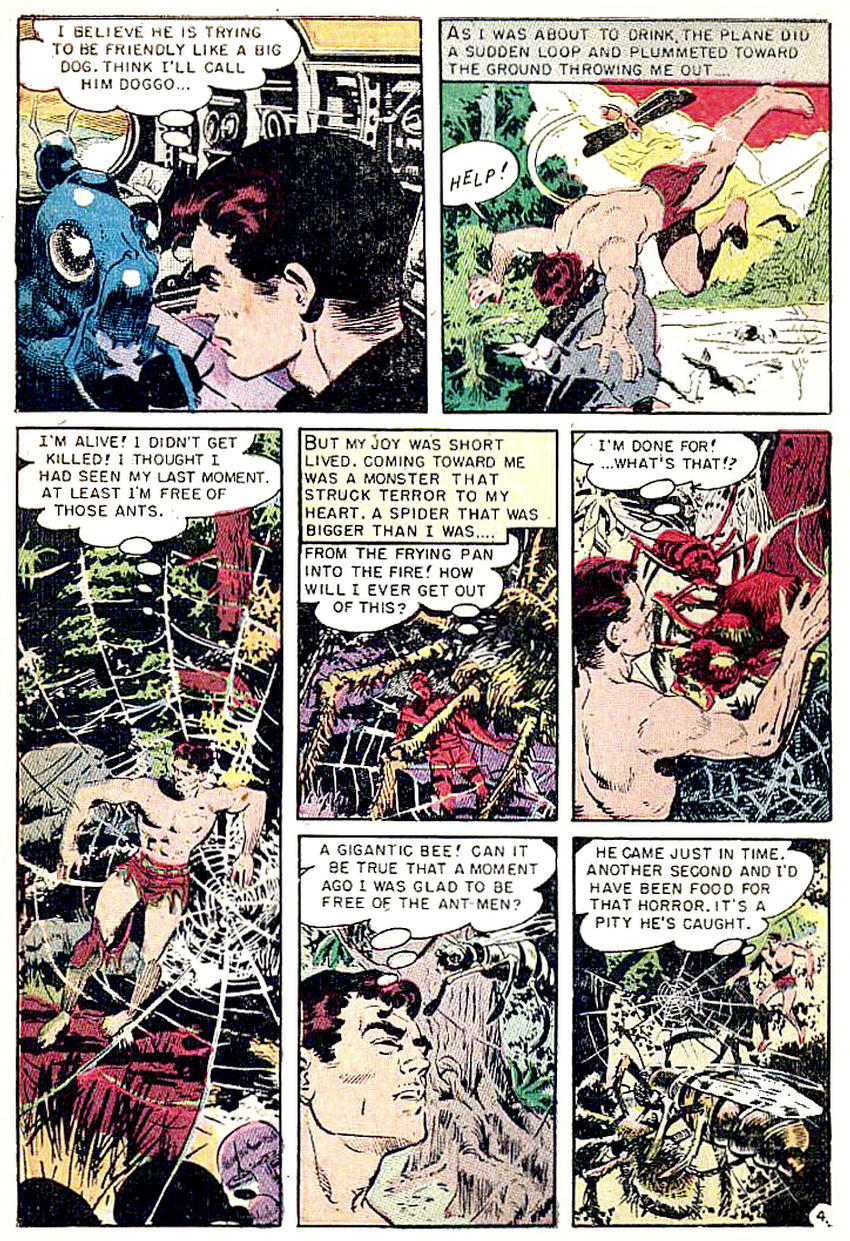 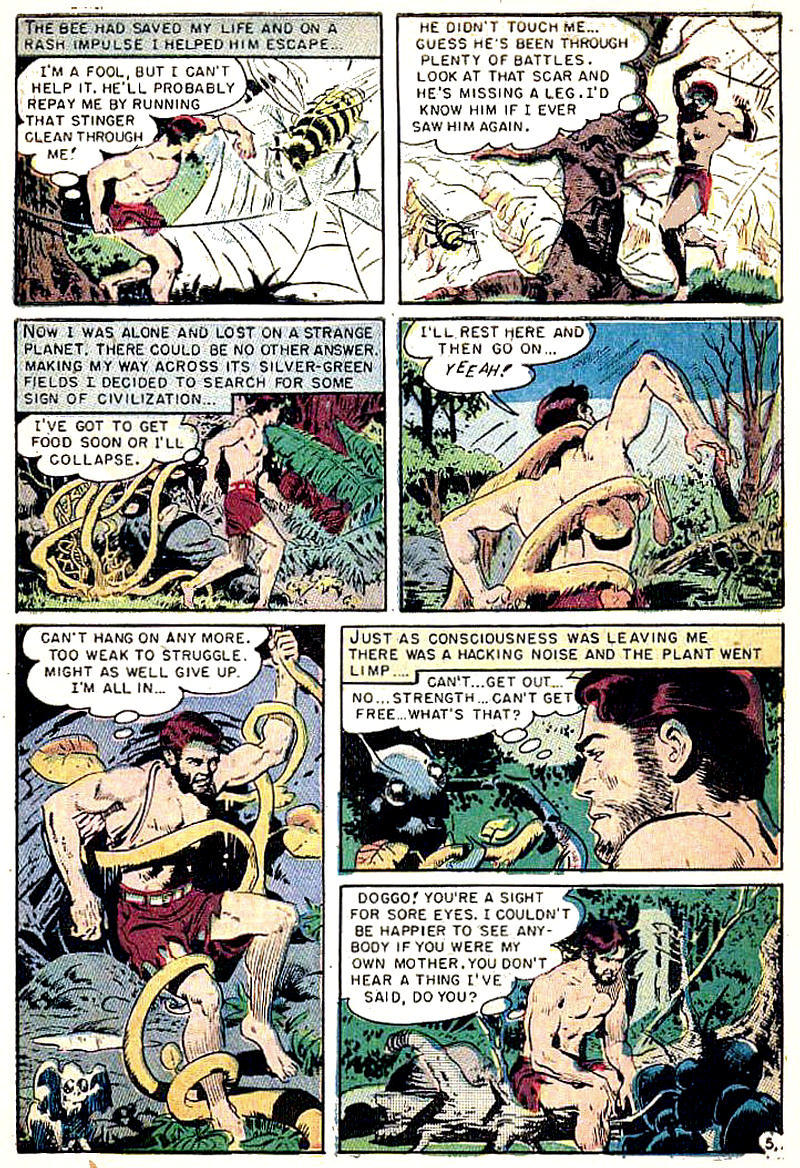 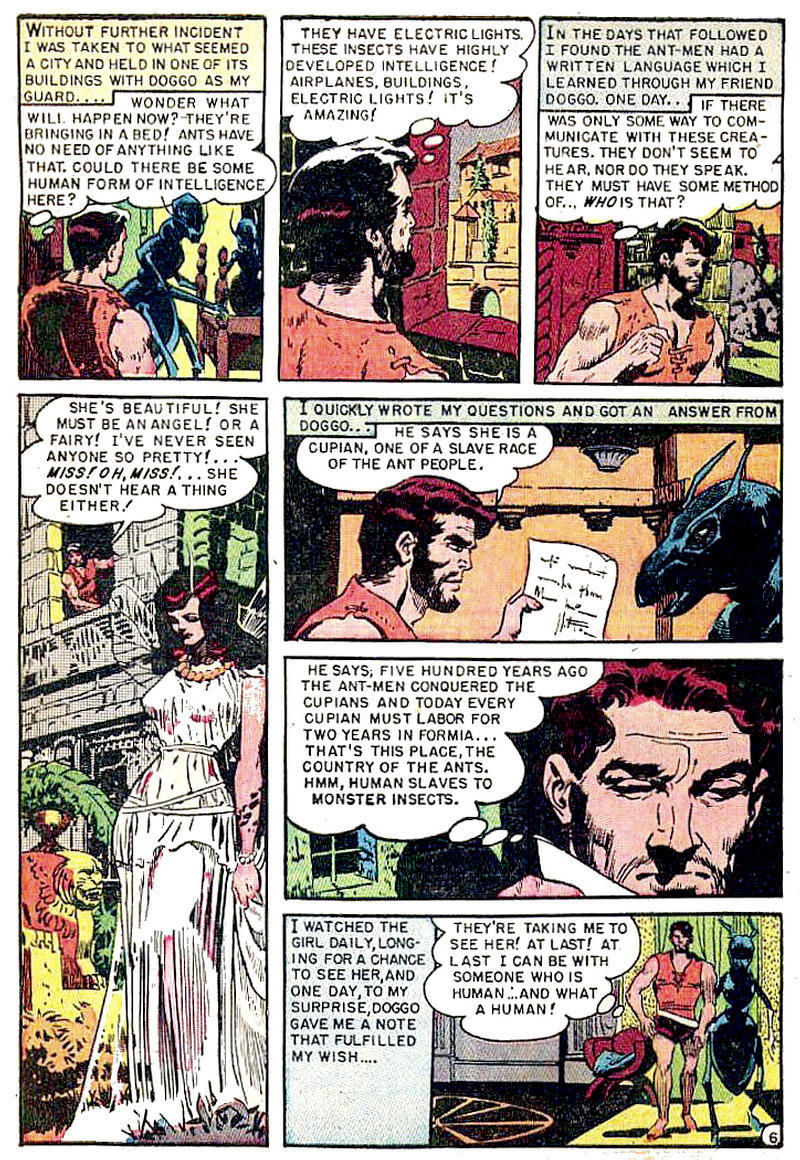 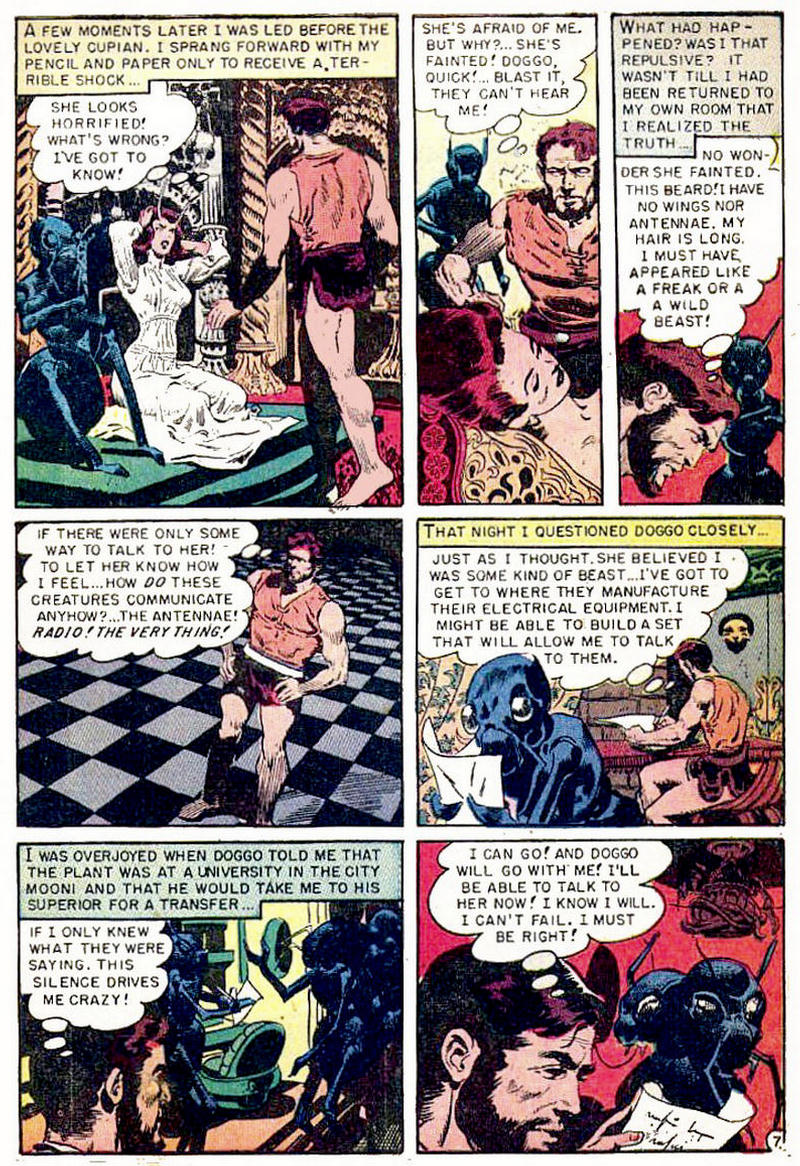 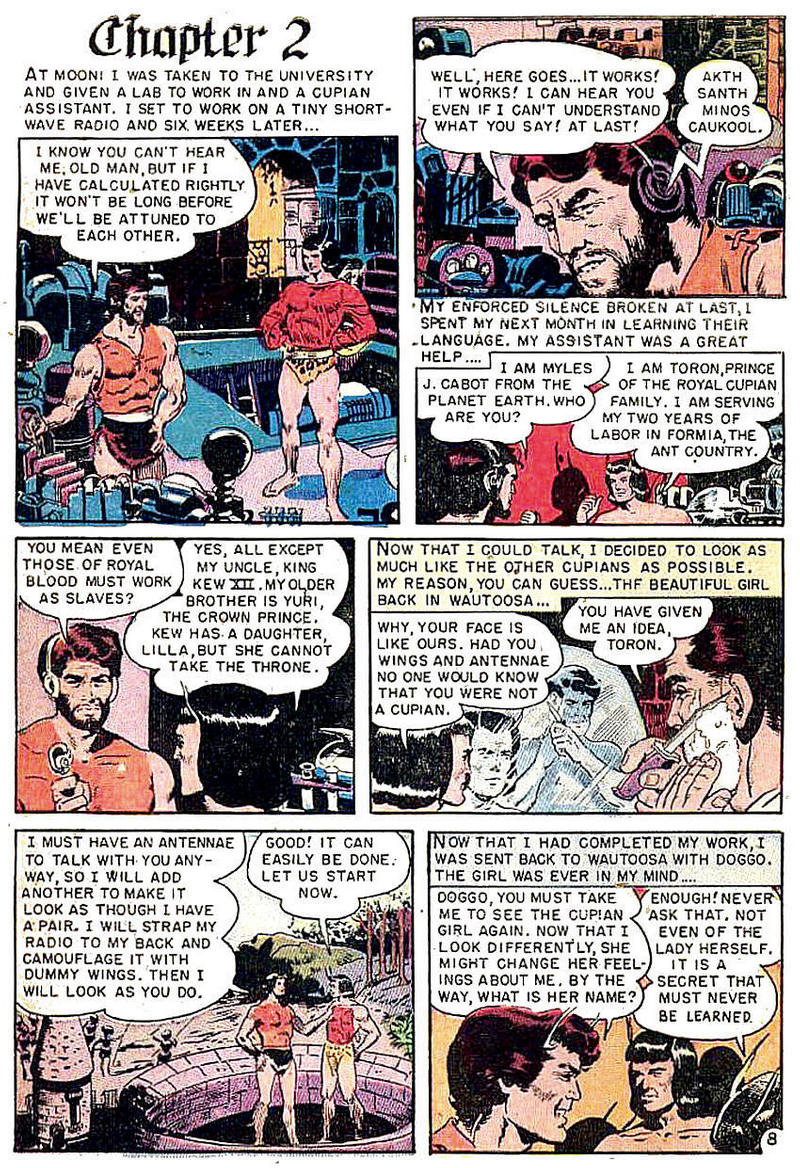 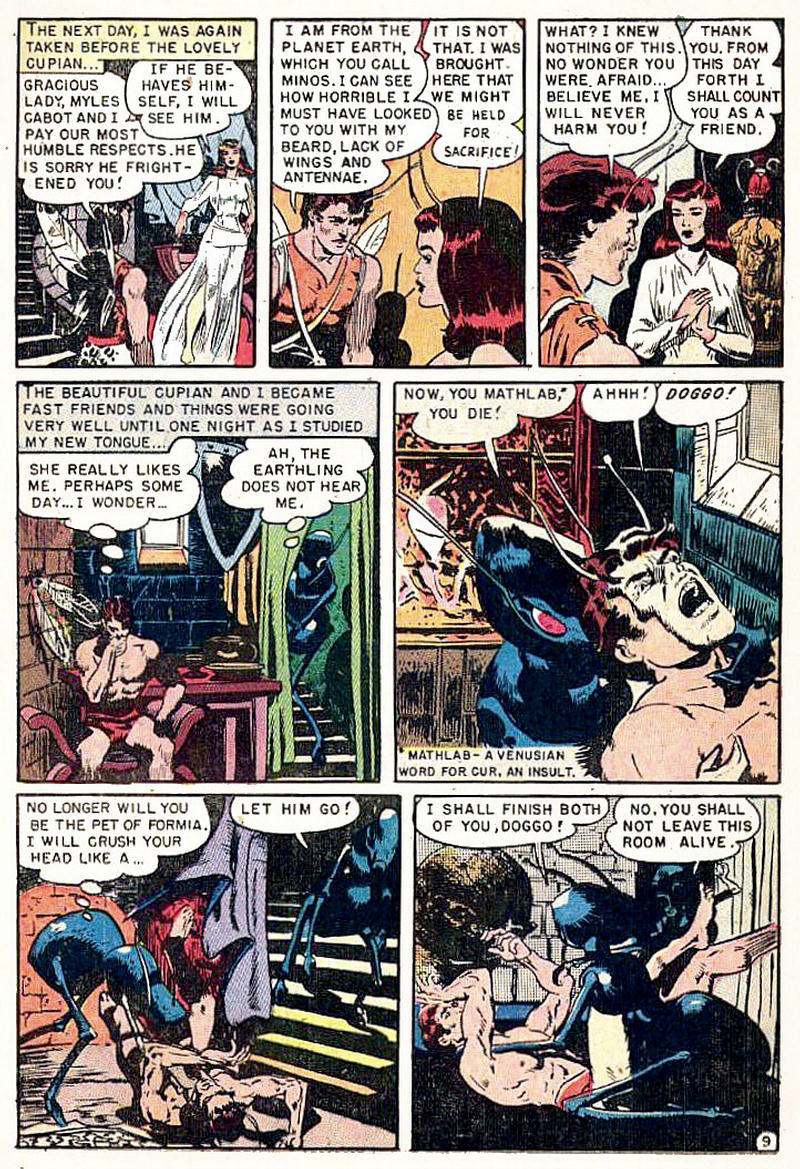 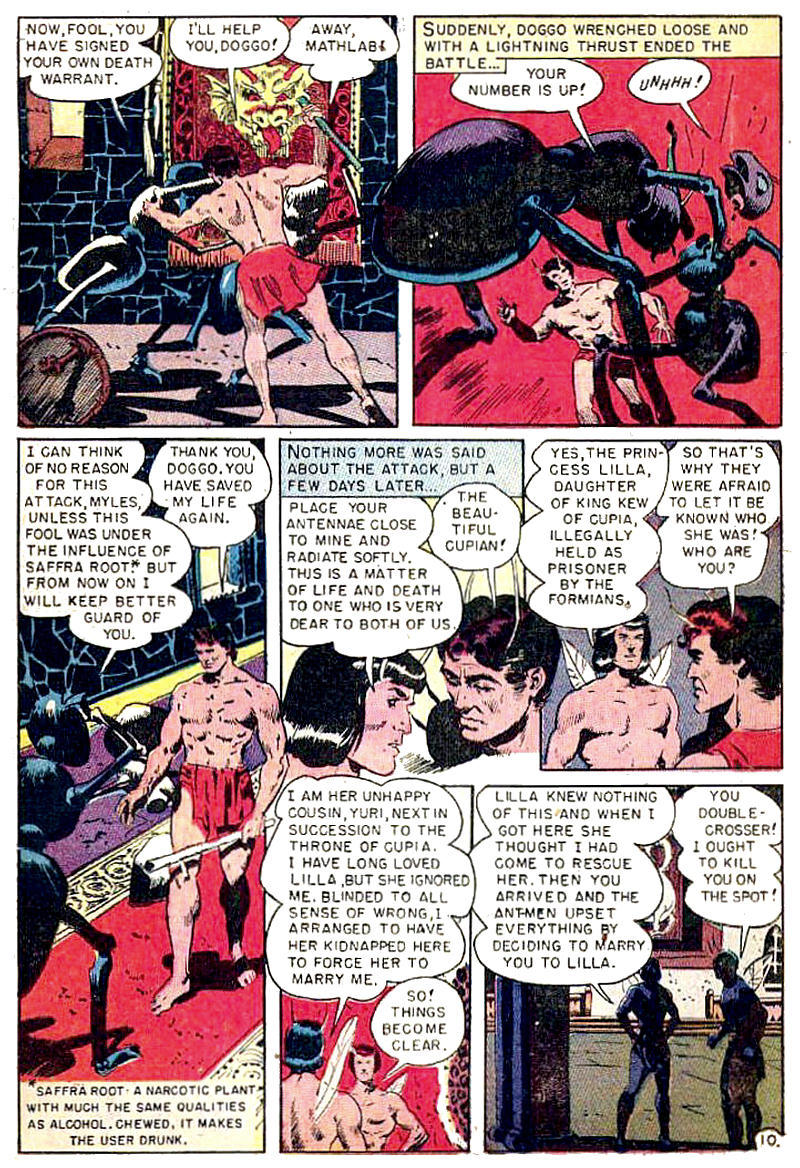 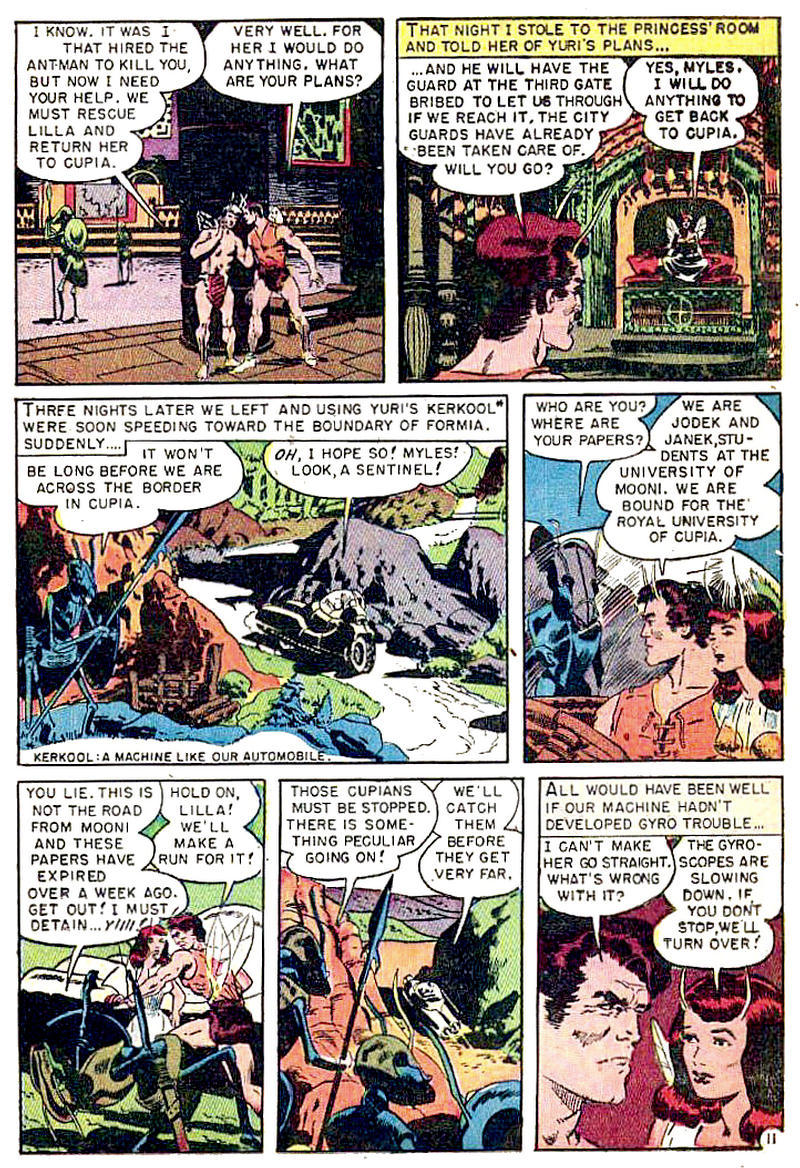 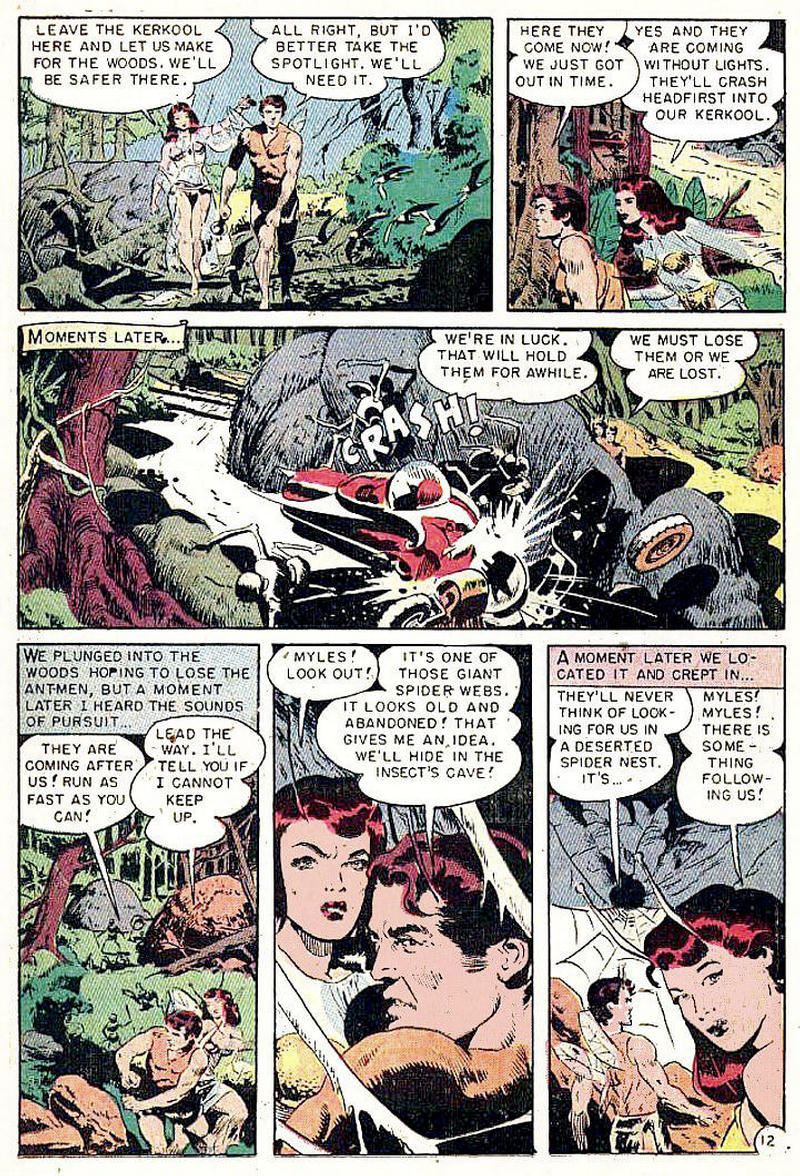 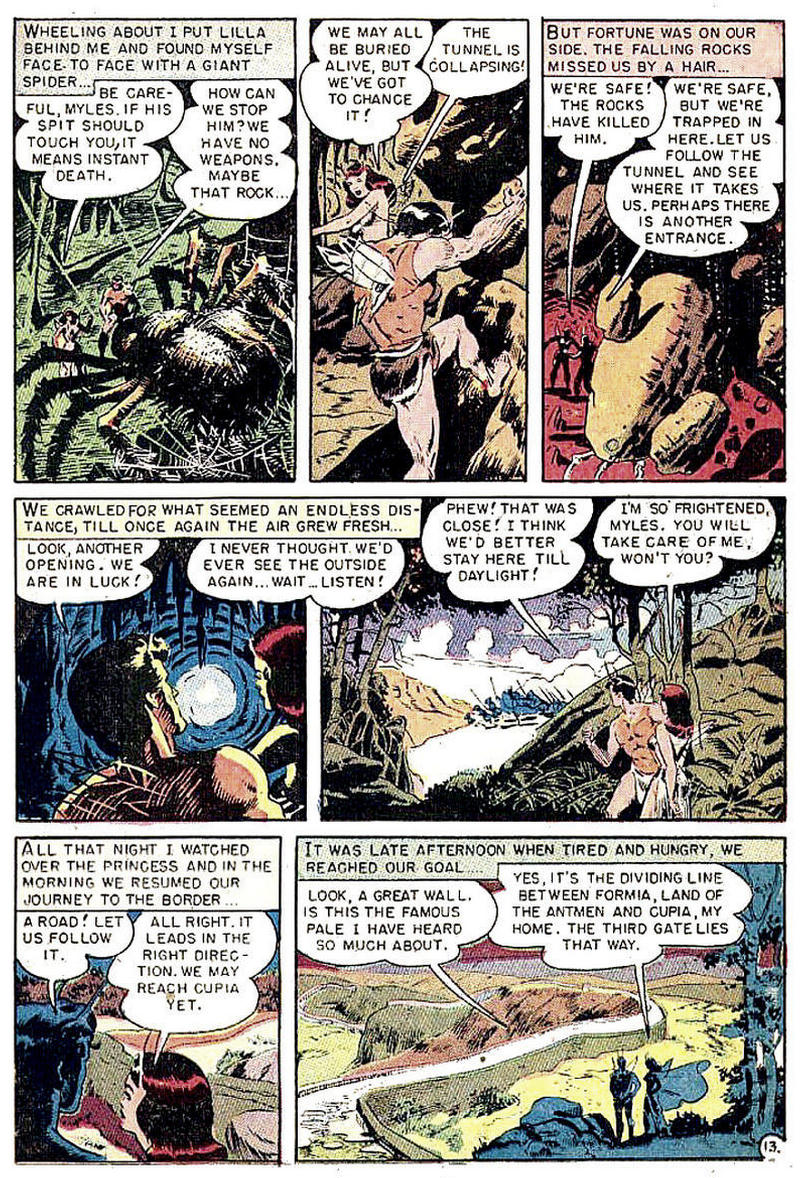 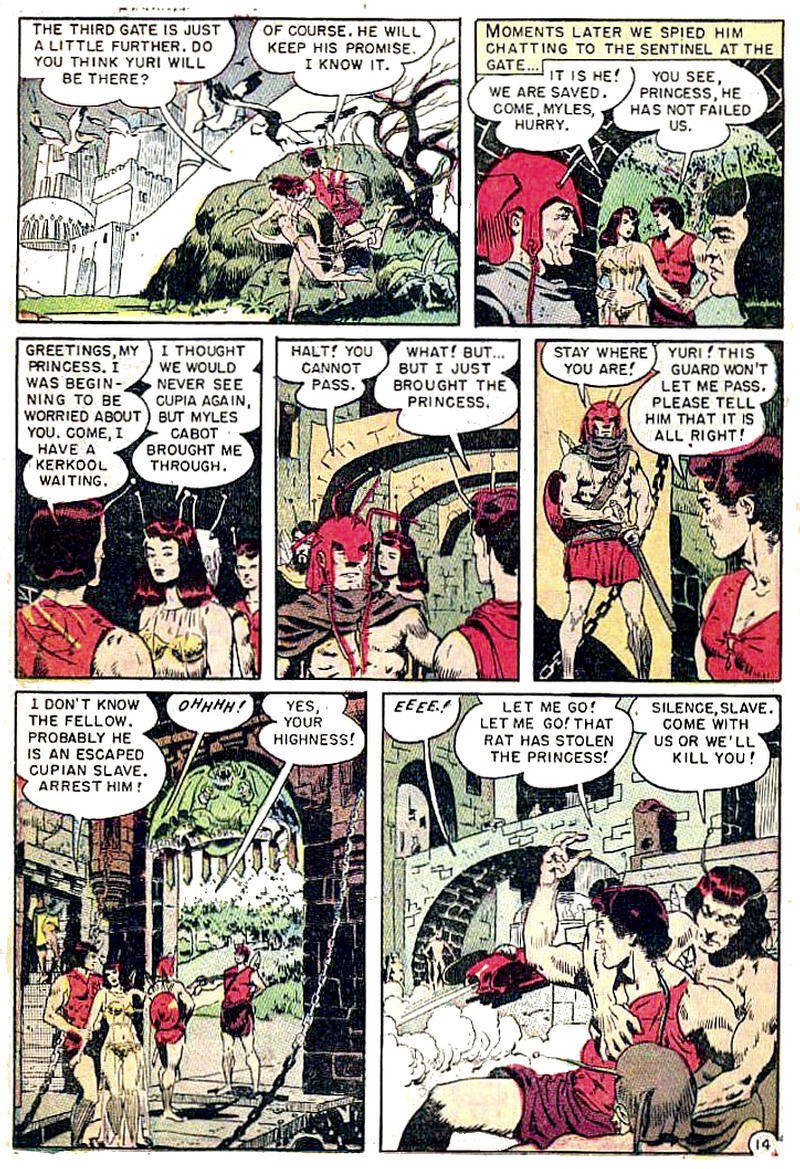 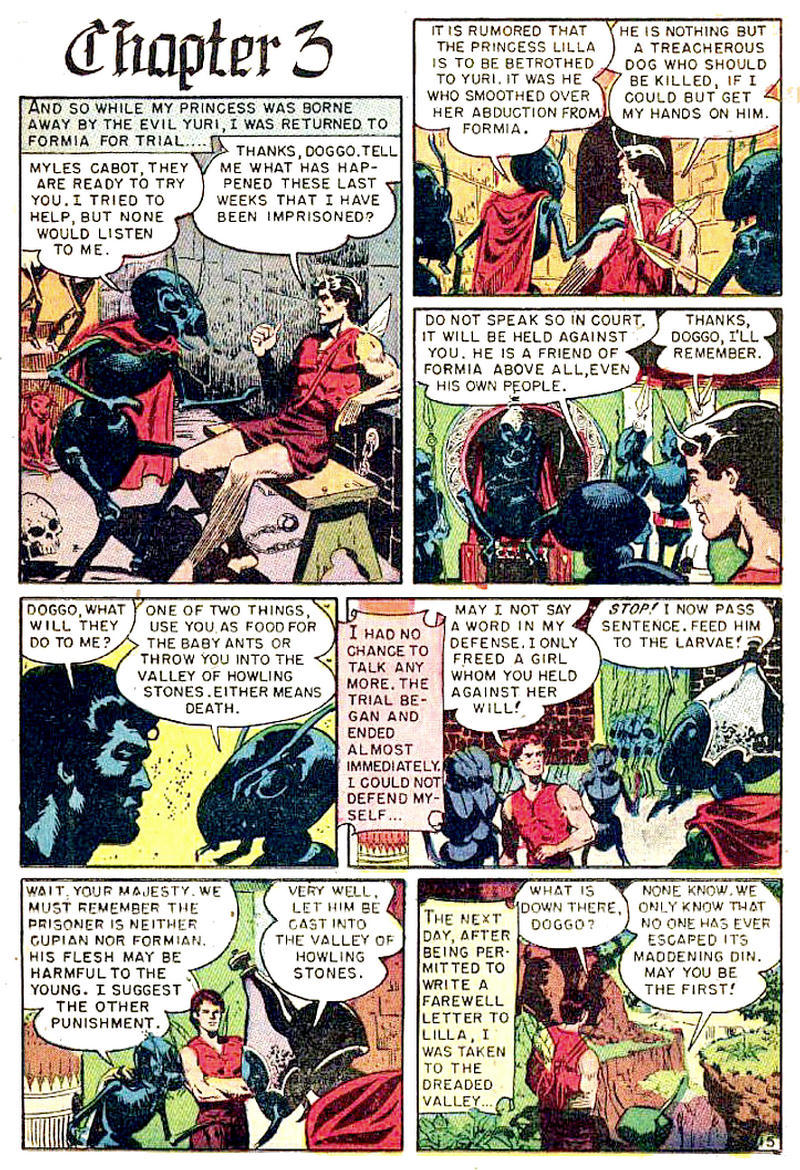 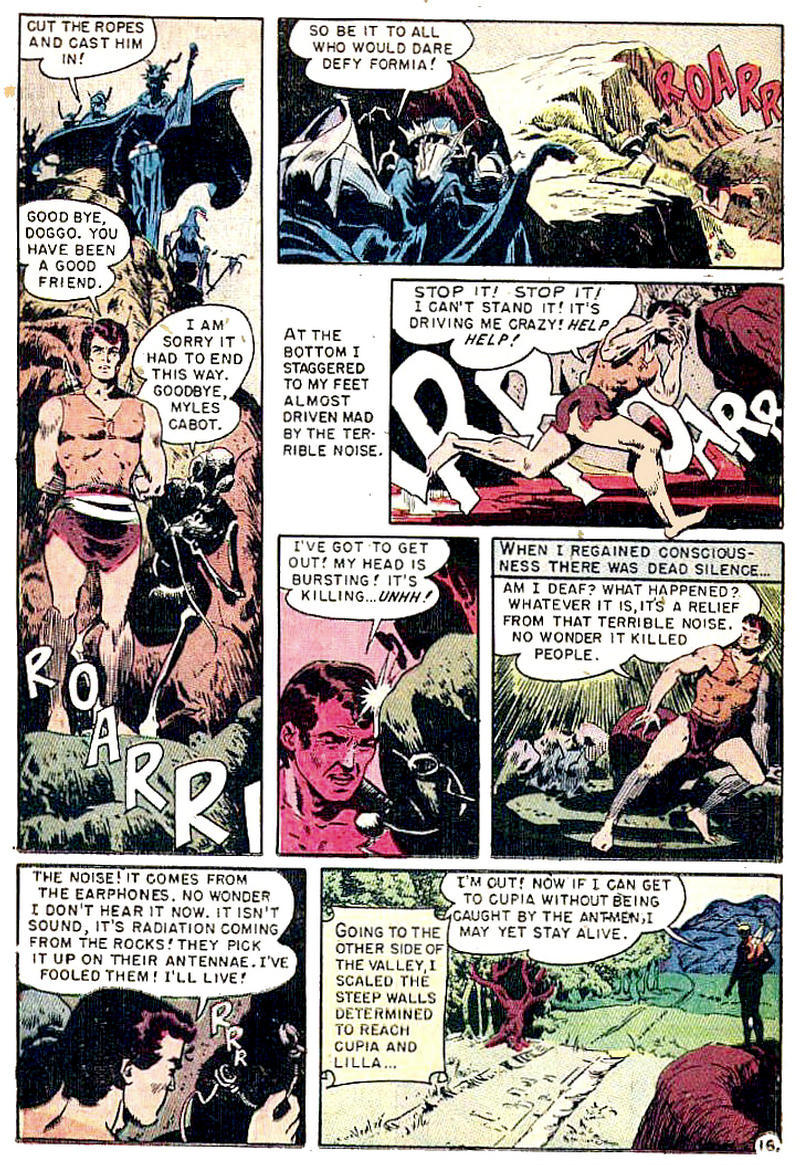 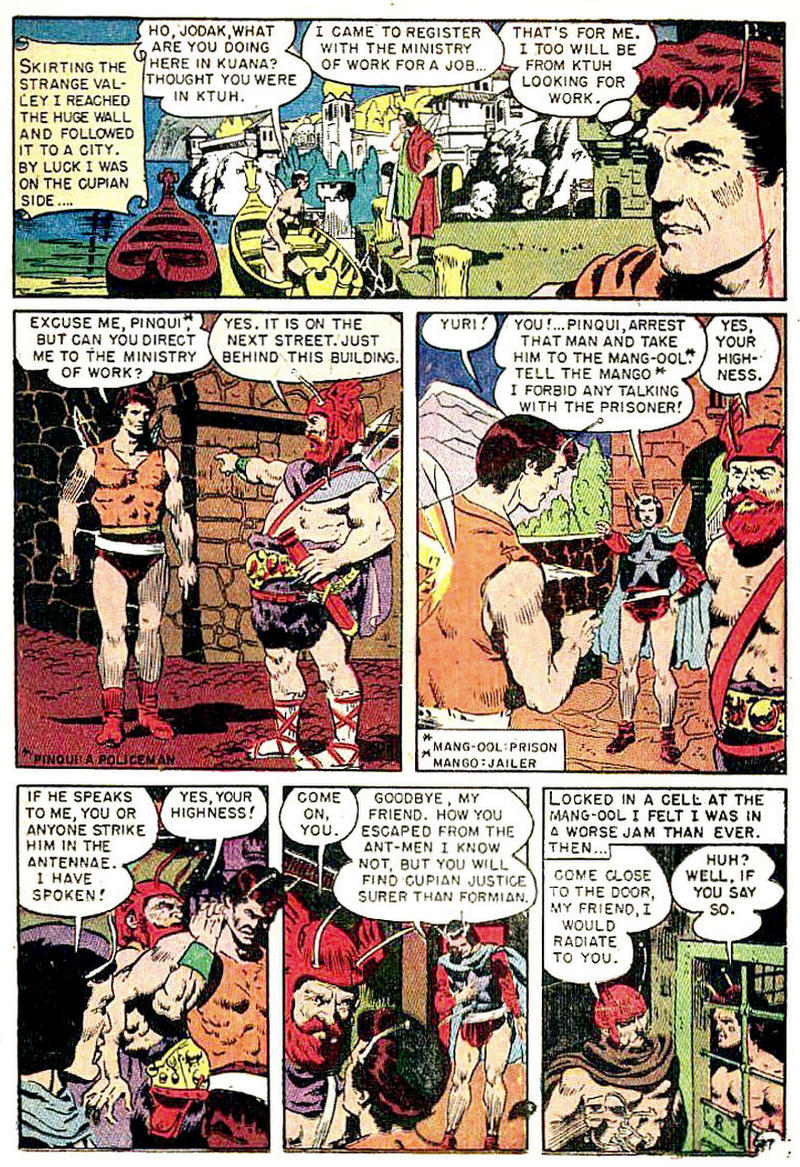 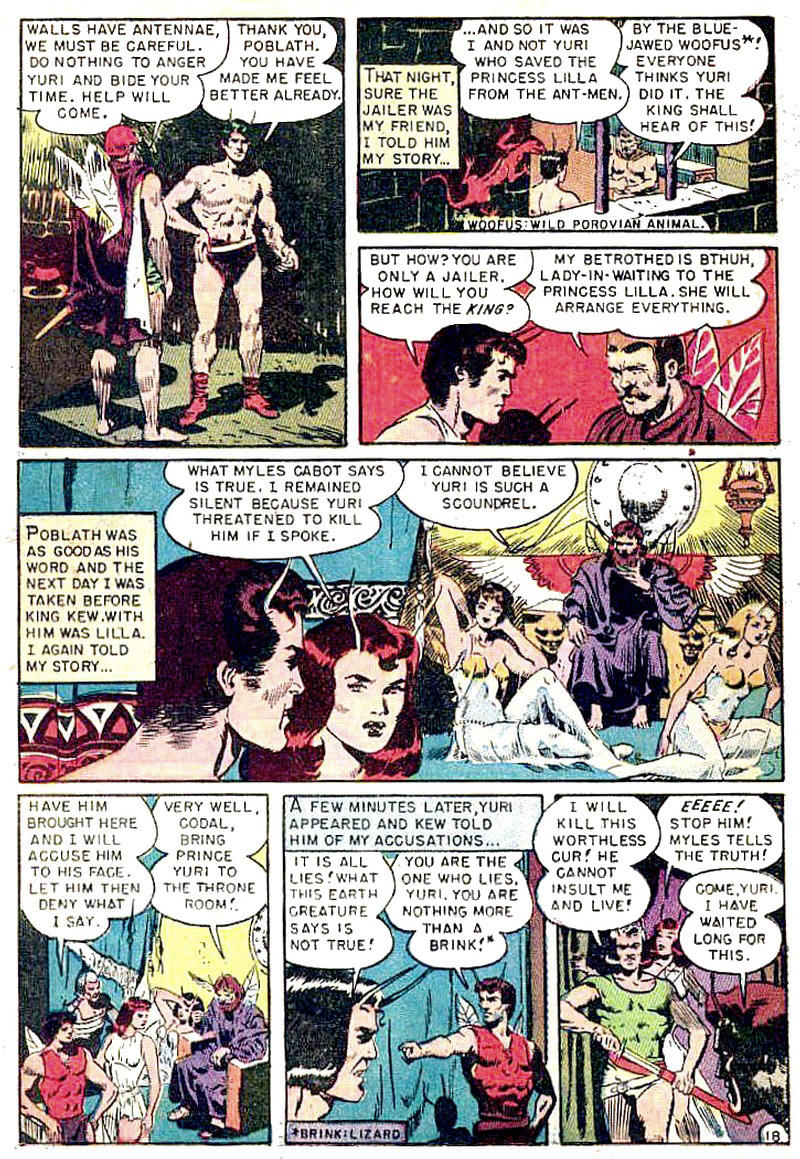 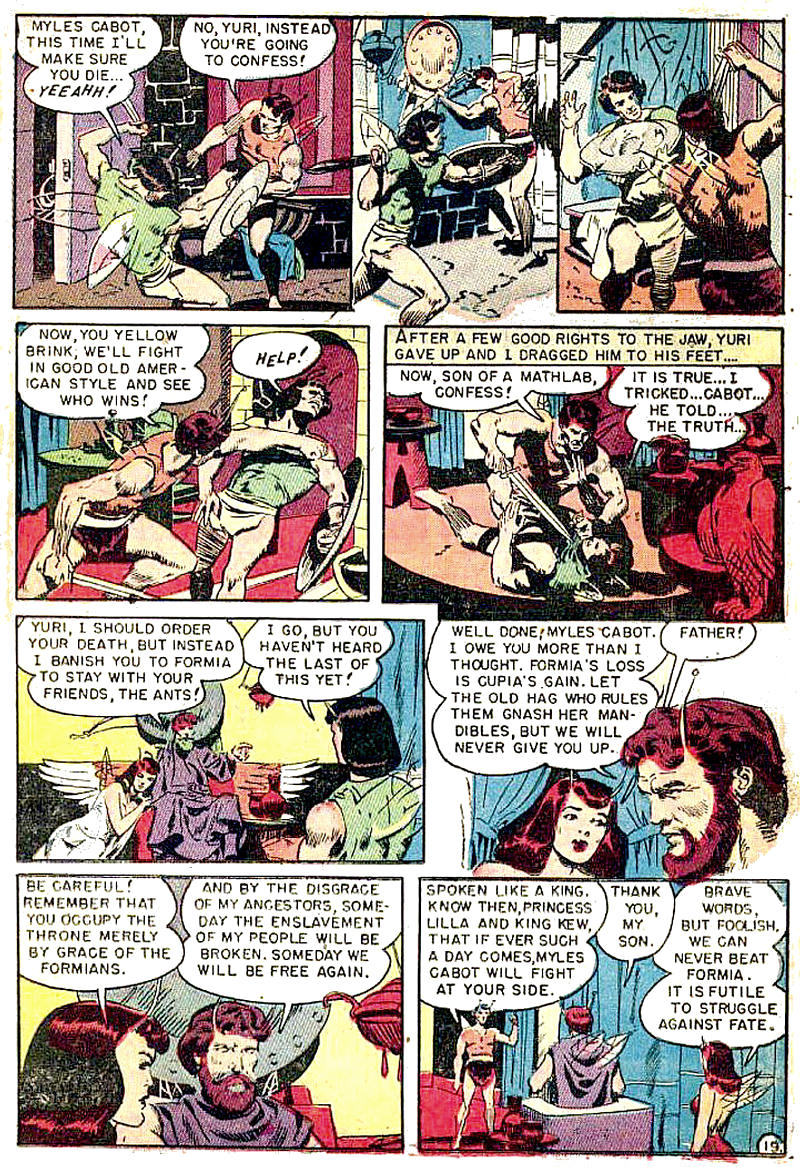 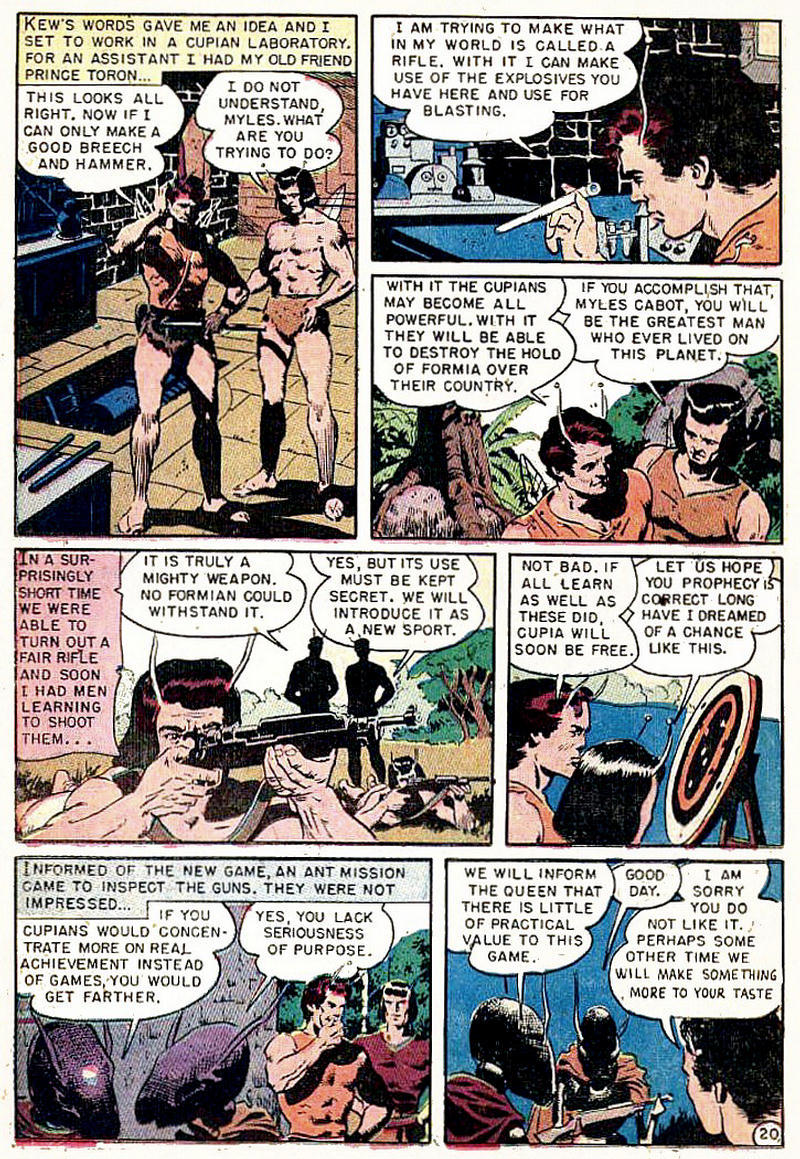 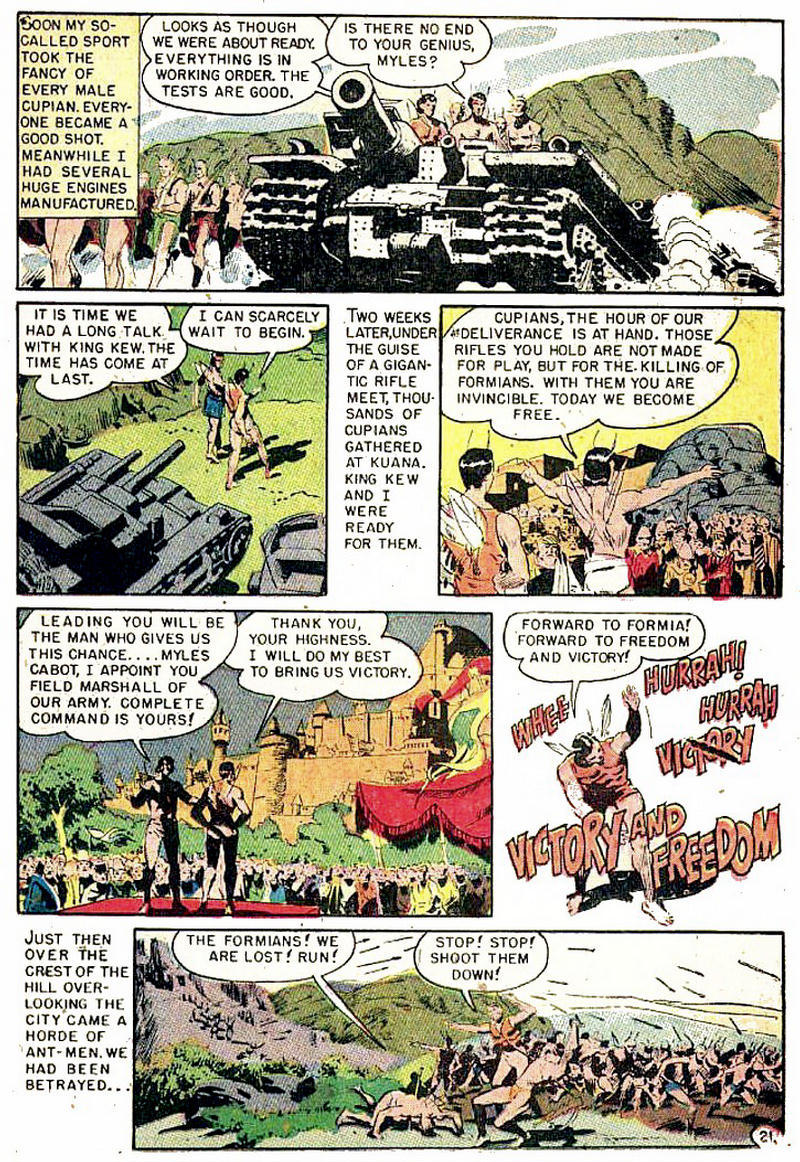 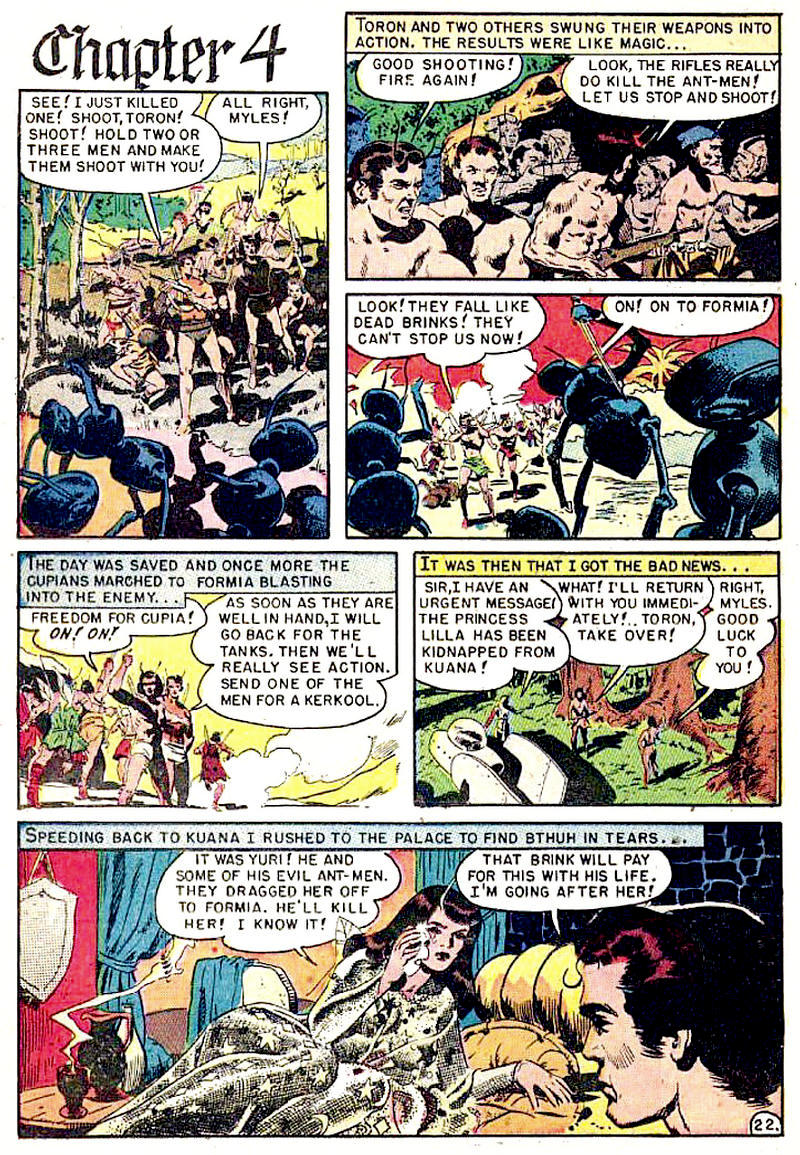 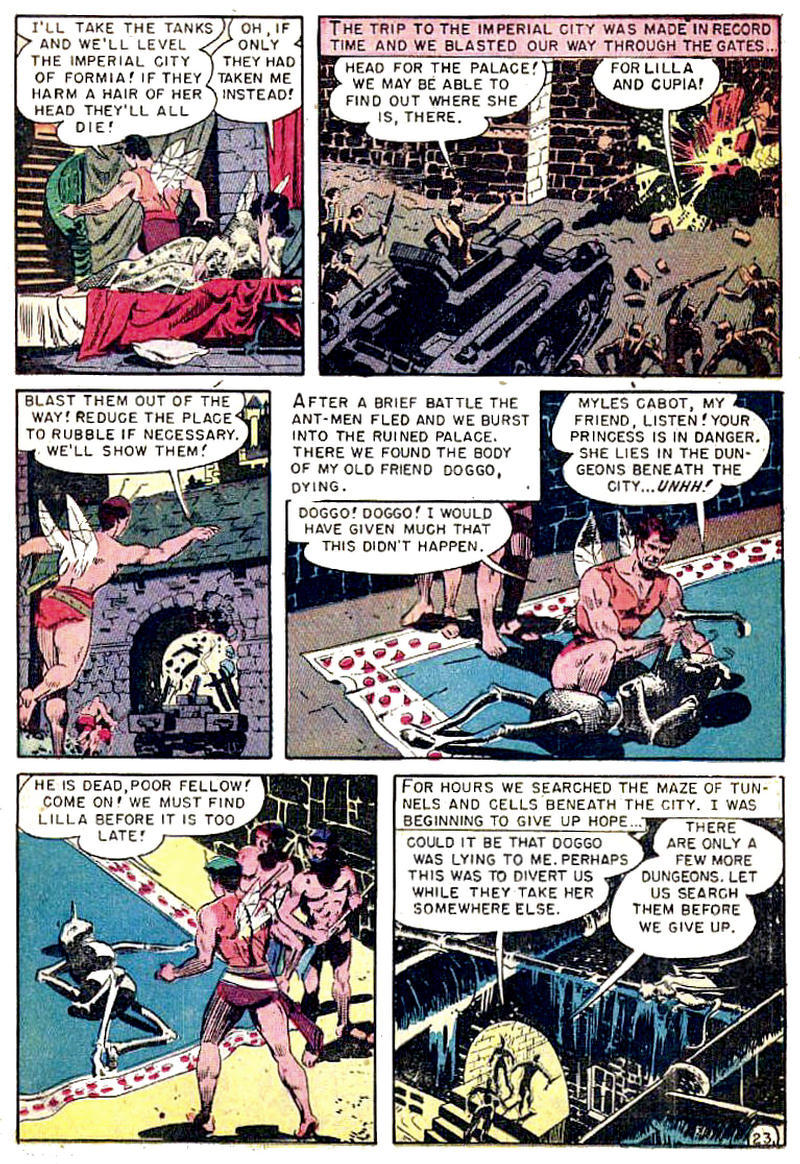 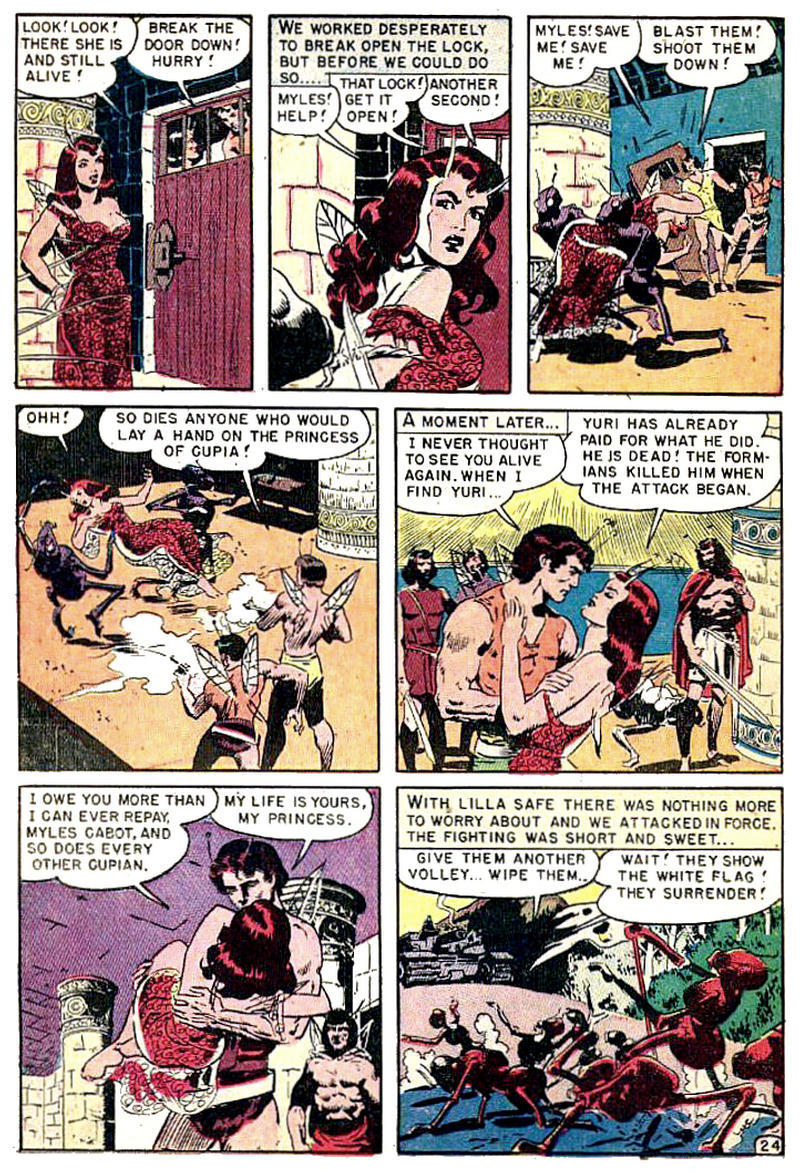 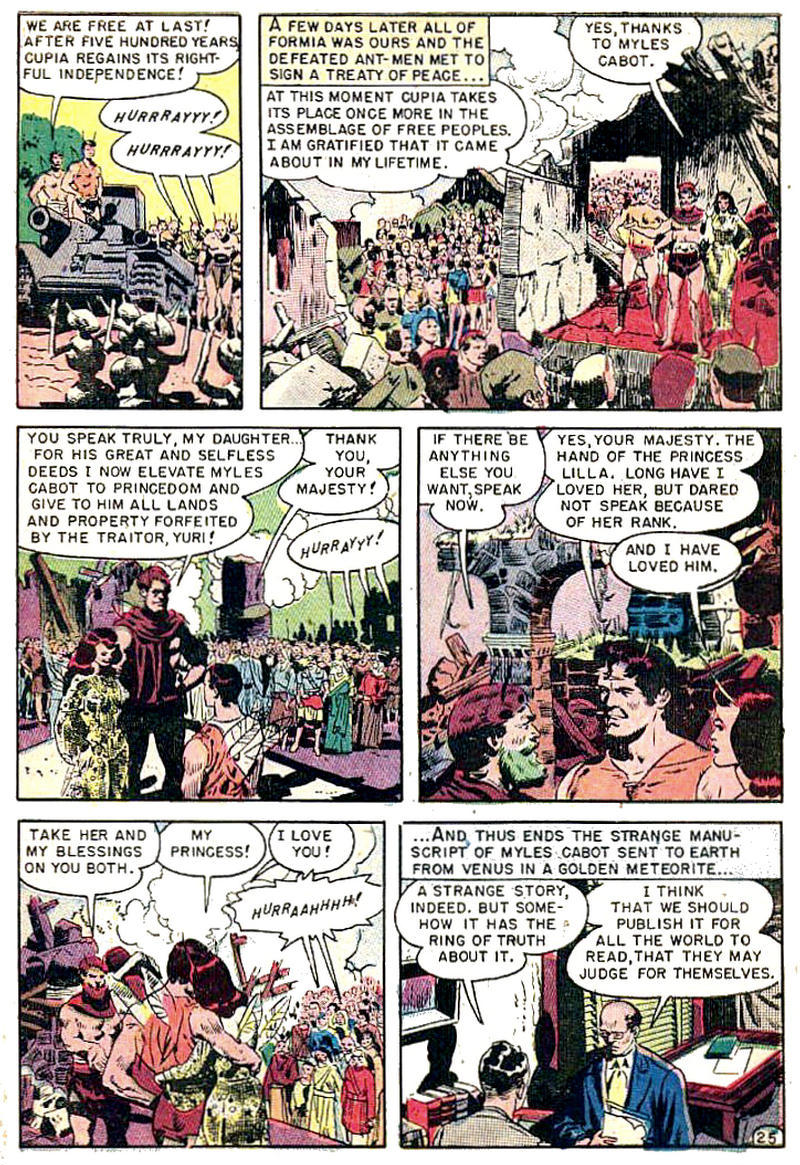 That was entertaining. The only thing that bugs me (mildly) is the idea that this science nerd would become a battle-hungry he-man. At least John Carter was a soldier. And I really wanted the guys at the end to ball up the story and exclaim, "Pah, rubbish!"

All right, Pappy, I can take a hint and will not discuss unemployment insurance in my comment!

Instead, I will again discuss the issue of giant spiders!

The strength of materials is basically a function of cross-sectional area, and this grows as the square of linear dimension. But the mass (and hence weight) of material is a function of volume, which grows as the cube of linear dimension. A big spider is less structurally sound. For example, a fall from a desktop onto a hard floor on the surface of the Earth is usually enough to mortally wound a tarantula. And bigger spiders would have great trouble just hauling-around their own weight.

So, on Earth, truly giant spiders are an impossibility. The gravitational pull on the surface of Venus is a little more that 82% of that on the surface of Earth, so spiders could get bigger; but not that much bigger. Ball-park the Venerean maximum as something just greater than 121% of the Terran maximum.

Now, as you have mentioned elsewhere, Terran spiders used to be bigger than they are to-day. The respiratory systems of spiders do not scale well, but Earth used to have an atmosphere much richer in free oxygen — so rich, in fact, that lightning storms could ignite it! As the amount of biomass that was animal increased, and that was vegetation decreased, the amount of free oxygen declined. Spiders settled at a smaller size, with the goliath bird-eating spider now being the largest sustainable. (6 ounces, which is still too d_mn'd big for anything less that horror, if you ask me!)

In real life, Venus has a lot of carbon dioxide, and not a lot of free oxygen; but, in '20s science fiction, it might well be oxygen rich. So perhaps the spiders would get to about 121% of the largest spiders every to skittle nastily across the surface of the Earth. Or maybe these spiders would use an entirely different respiratory system. Still, the aforementioned structural issues would come into play, and the Venerean spiders would be nothing like the spiders shown in this story.

Okay, enough of that.

Myles is advised that his facial hair makes him appear to be a strange beast to the princess, yet at least two of the Cupians are later shown bearded, one being the father of said princess. I suspect that Wood is responsible for this inconsistency, as I don't imagine Hoar having described any of the Cupians as having beards after the previous twist.

Thanks for this tie-in with Pulp's world. Burroughs martian and Tarzan stories were such a hit that many rip-offs were generated (his rivarlry with Otis Adelbert Kline is famous), but I never heard of Sherman Hoar, who appears to be a friend of Burroughs. The premise of Radio Man looks quite clever and anyone who works for Weird Tales is interesting to me. Looks like Hoar was another remarkable man from New England.

Ryan, that was my thought. Why would they think it was anything more than a ms. for a pulp magazine story?

J D, I'm sure Sherman Hoar kept his Ralph Milne Farley secret identity so no one would come up to him and say, "You're that guy who writes all that crazy stuff."

Daniel, that birdeater tarantula of South America, seen in this National Geo video, is way too big for me. Even at his size, 121% would be pretty big, especially if I saw it waiting to pounce on me. Size isn't all that scares me, man.

As for unemployment insurance, I collected it a couple of times in the mid-seventies. After that I went to work for a taxpayer funded entity that did not put into the fund.

Recently my next door neighbor told me he was going through some stuff in his basement, and found an uncashed unemployment check made out to him, from 1976. He actually deposited it, but got it back with a note telling him it is unclaimed property, and how to go about claiming the $110 from the State. I should be so lucky.

OMG Pappity its so long! My I's hurt cuz we wer @ tha Yankees game last nite getting drunmk in tha Mohegan Sun Sports Bar & it lasteded like 19 periods or quarters? PIC & I dont rememberize how we got home yo butt Deb is asleepering on my couch & also on my end table. MayB I'll hav my art guy blow up each pannel of this comic 2 full screen than I can try 2 readerize it omg Pappity tha head egg I've got rite now yo omg we luv u Pappy xoxoxoxoxo

Alicia, dear, take this fatherly advice from your Pappy: do not hang out with the wrong crowd. They will only be bad for you in the long run. In other words, don't hang out in baseball parks with sports fans.

Oh, yeah...and sports bars, too. They are their own brand of trouble.

Gene Roddenberry was an Edgar Rice Burroughs fan, so Star Trek may have been at least partially inspired by the John Carter of Mars stories.