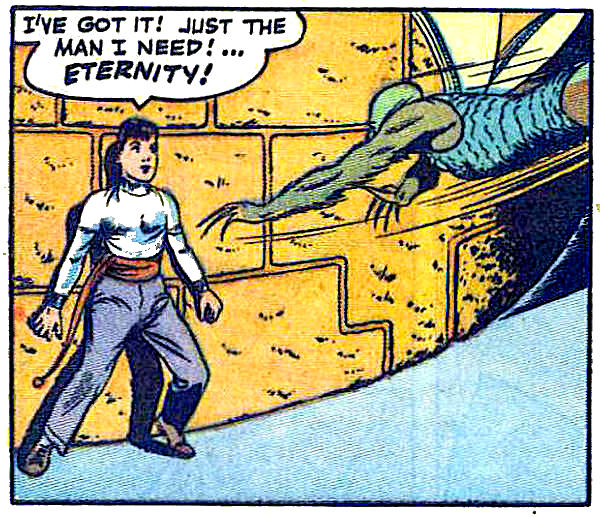 Kid Eternity’s job was to aid people in trouble, and did it by coming to Earth from his home in Eternity. In this episode Kid E fights off ancient monsters, the Thuggoths. Centuries ago the Thuggoths were defeated by none other than King Tut, also known as Tut-Ankh-Amen. In reality Tut lived a short life, and as shown by the BBC and a photographic re-creation based on his remains, was physically challenged as a result of inbreeding. 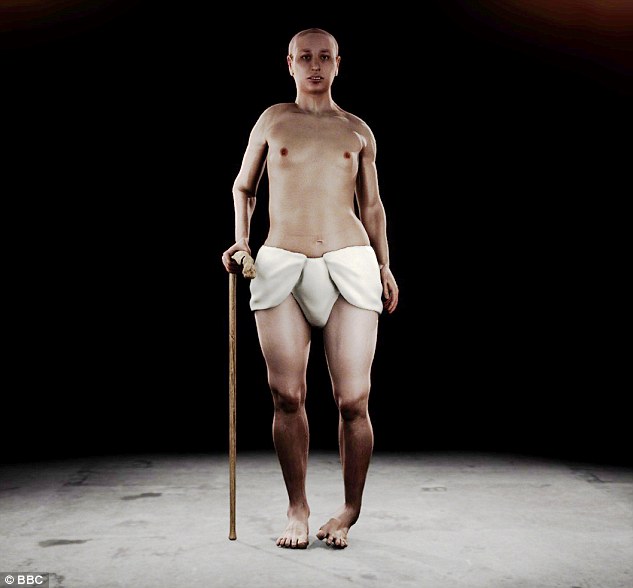 In the Kid Eternity stories the Kid calls famous people from Eternity to help him fight whatever menace he is battling. He does not differentiate between mythical figures, like Atlas, or real-life people. William Tell is regarded to be legend, but Johann Martin Shreyer was a real person. The kids who read these stories might have been a bit confused...or maybe they just did not care (personally, I do). The art is by Al Bryant. Credit — or blame — for the script goes to William Woolfolk. 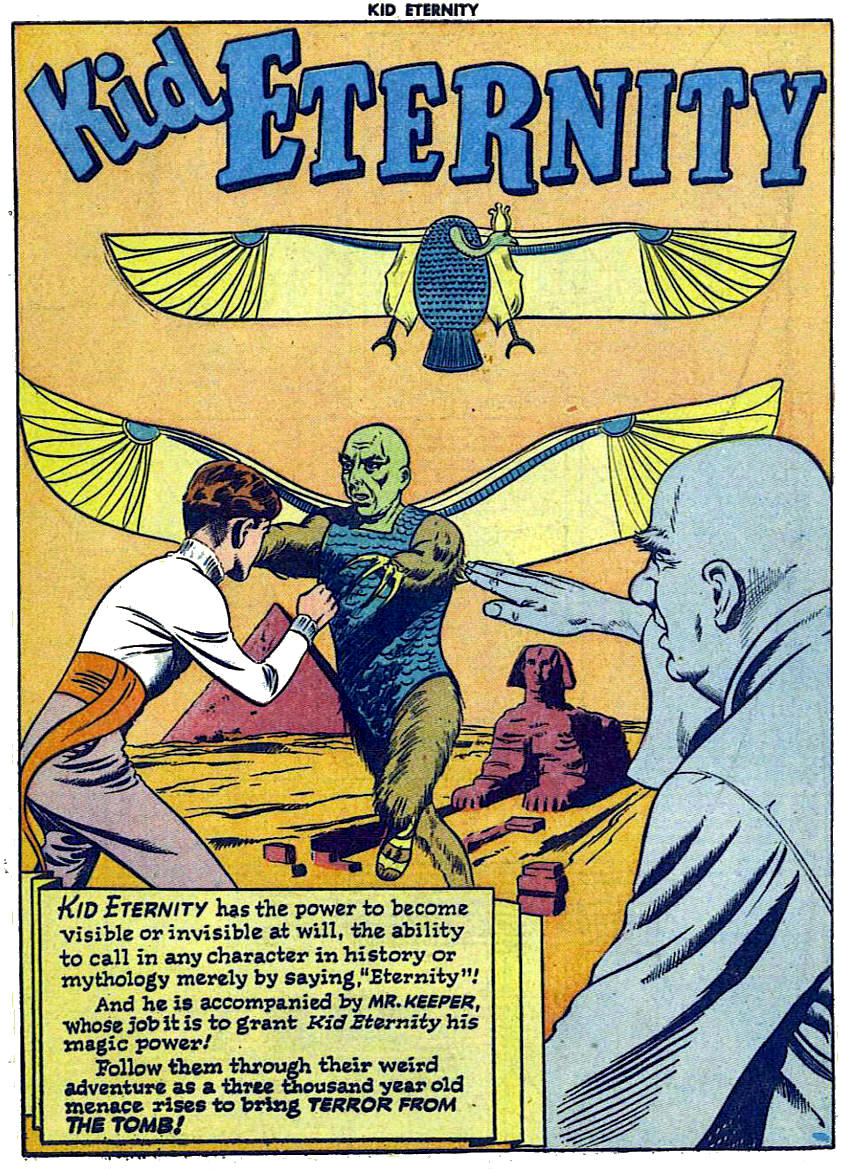 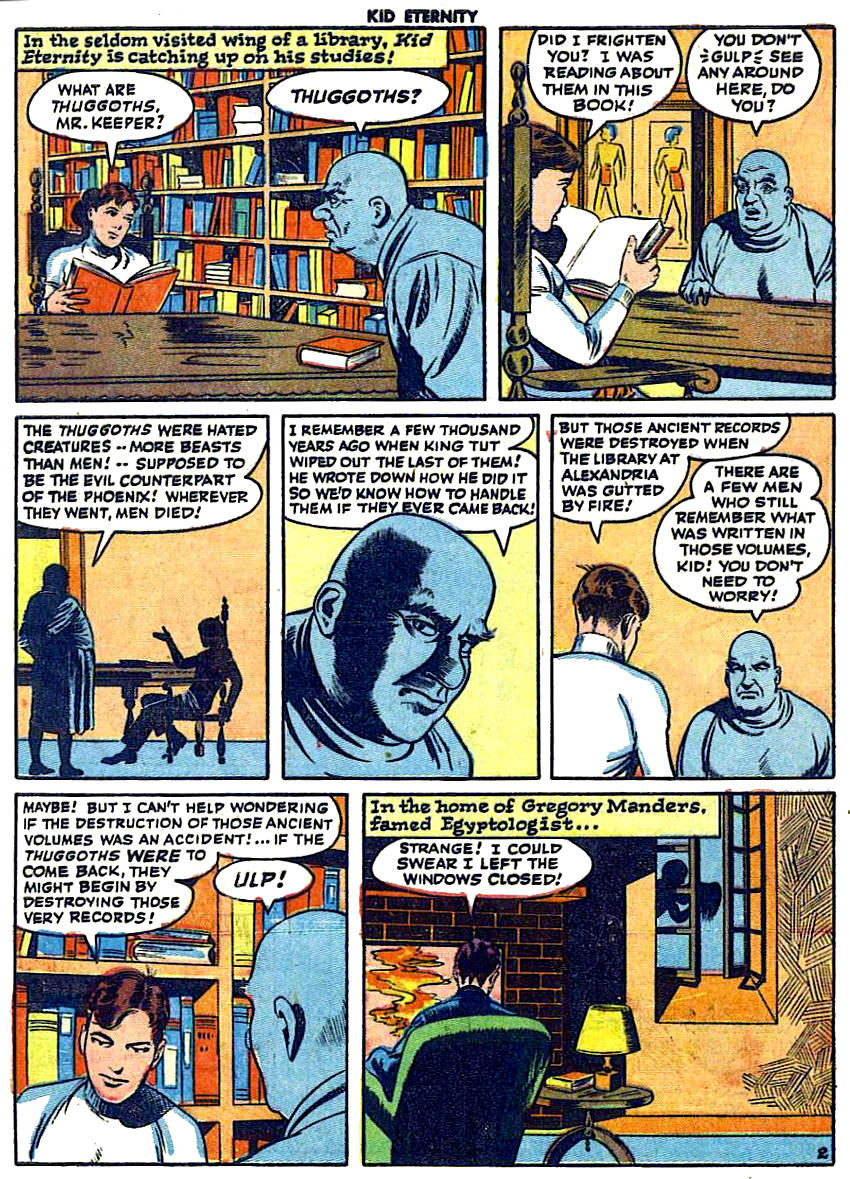 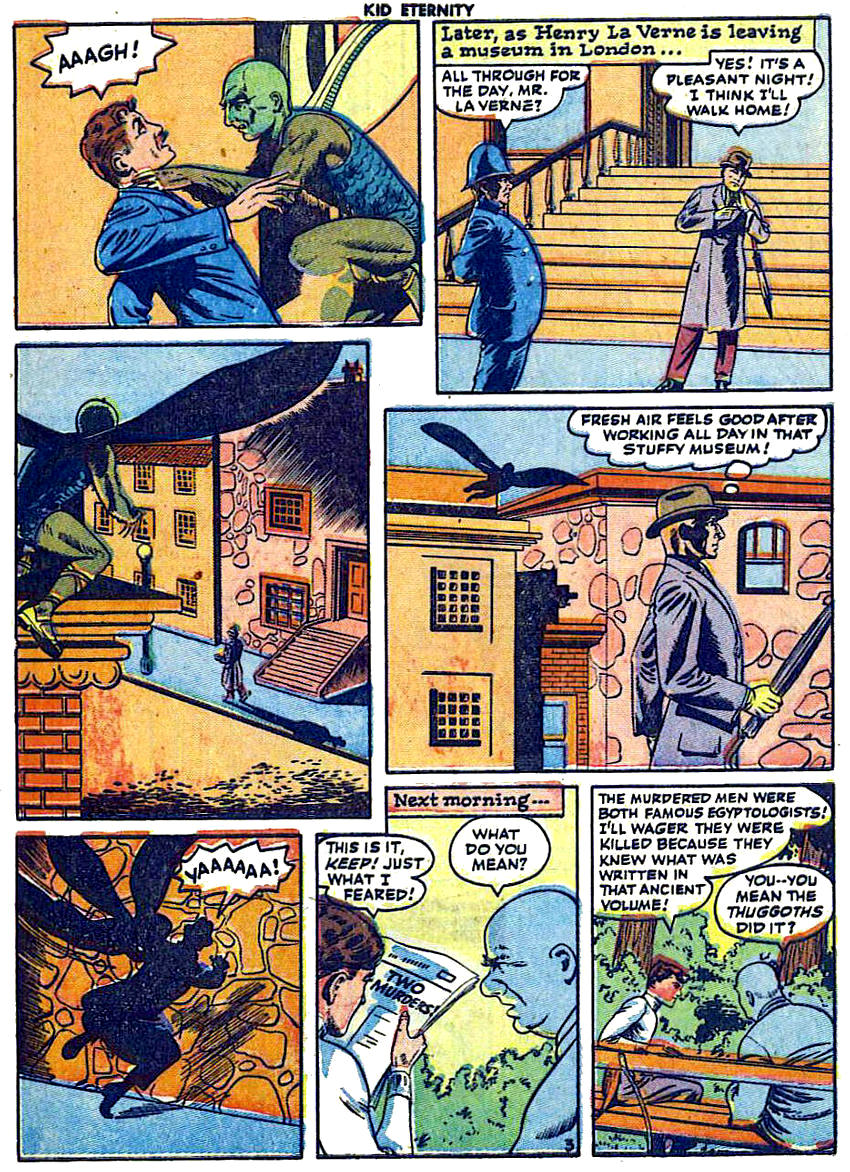 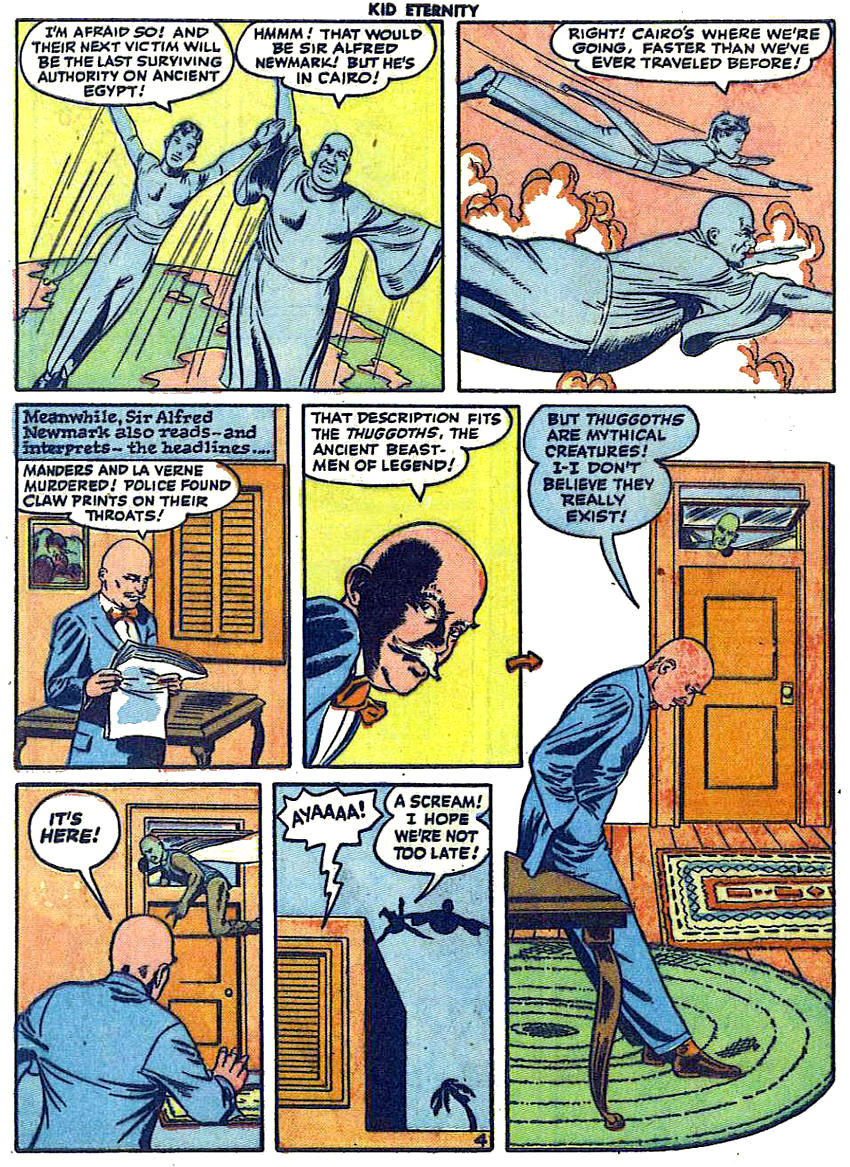 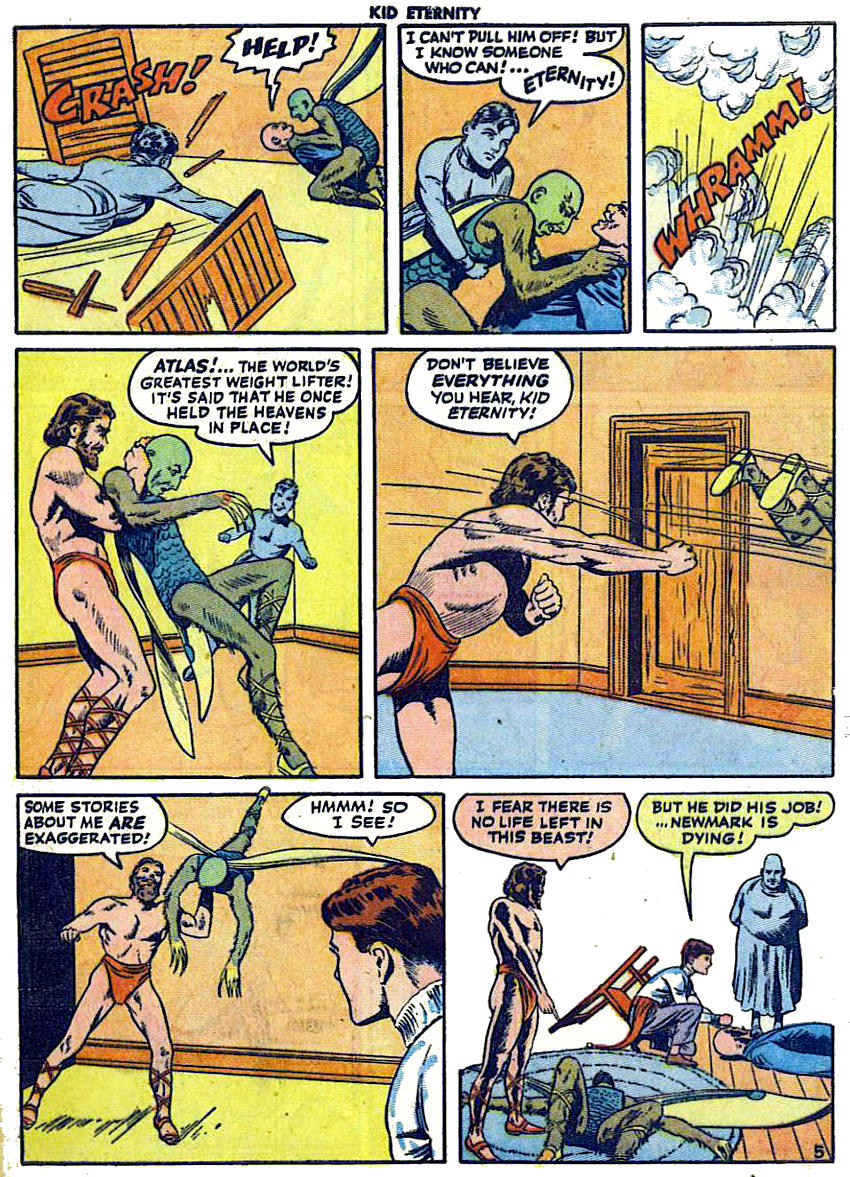 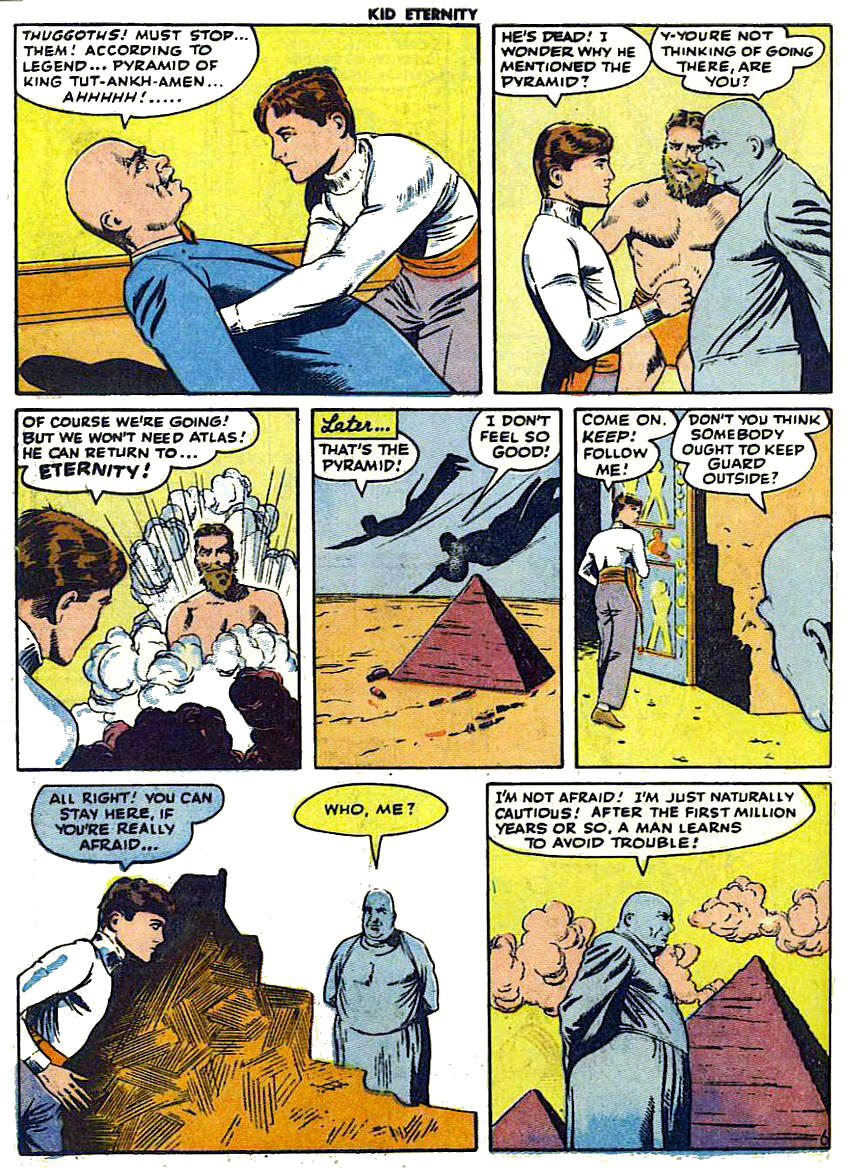 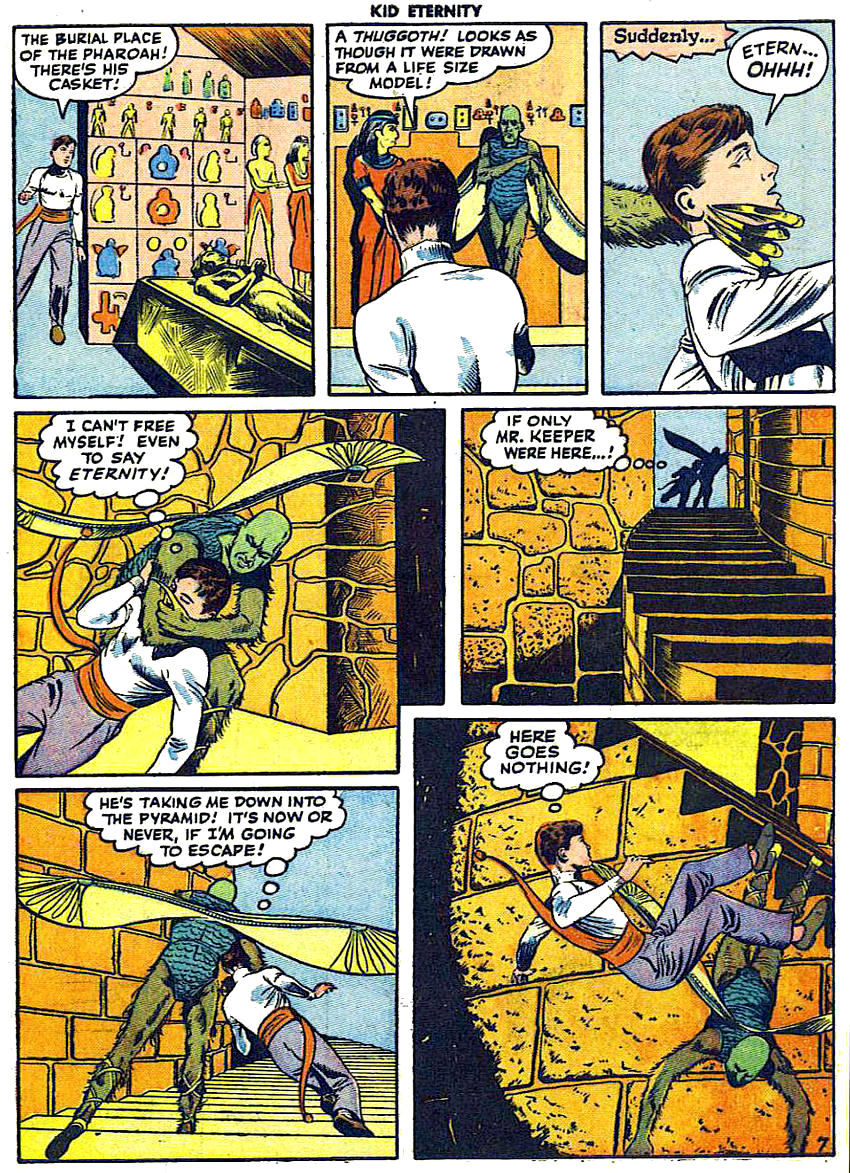 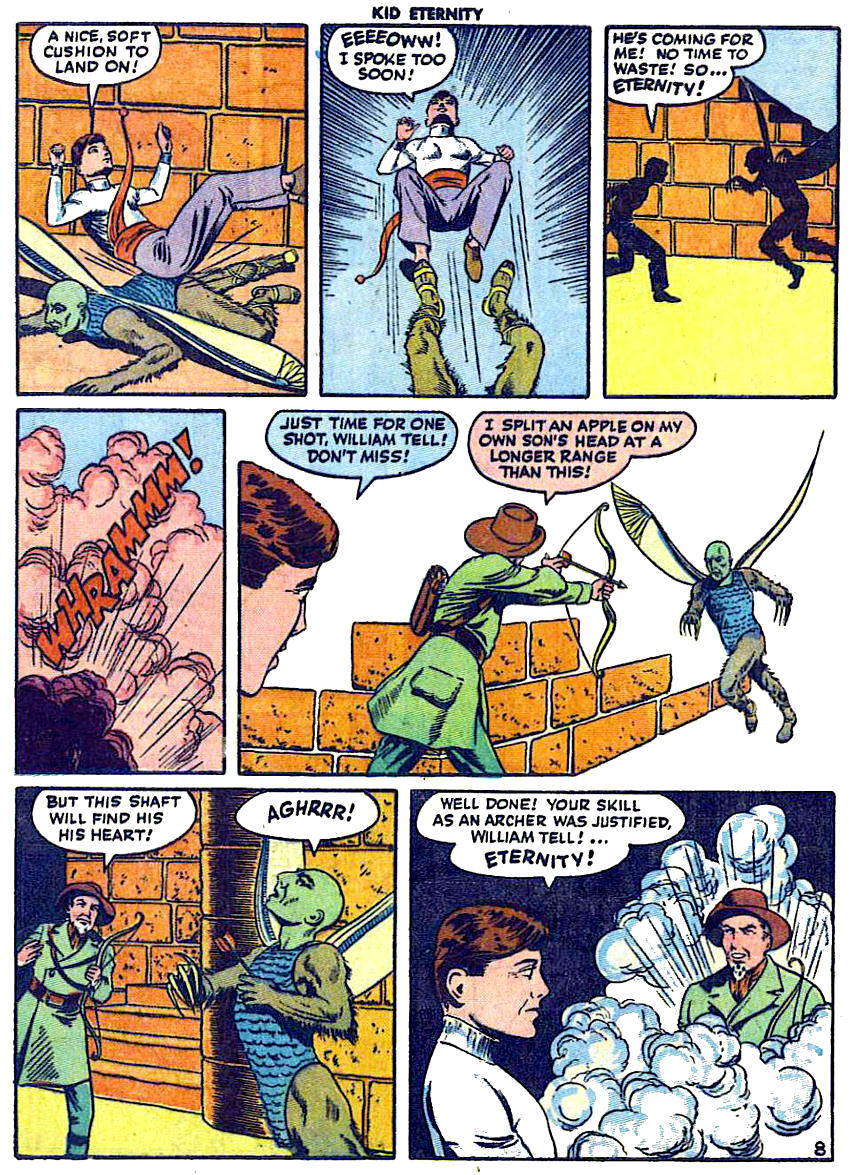 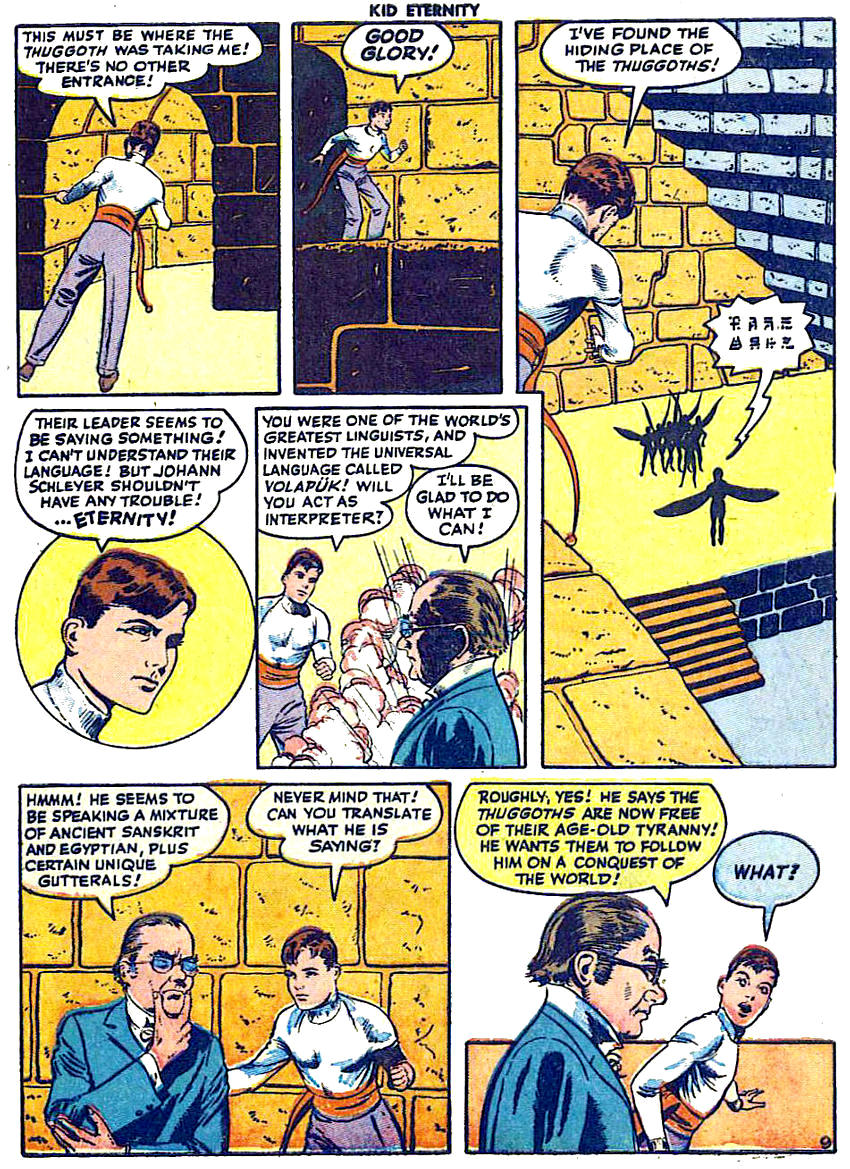 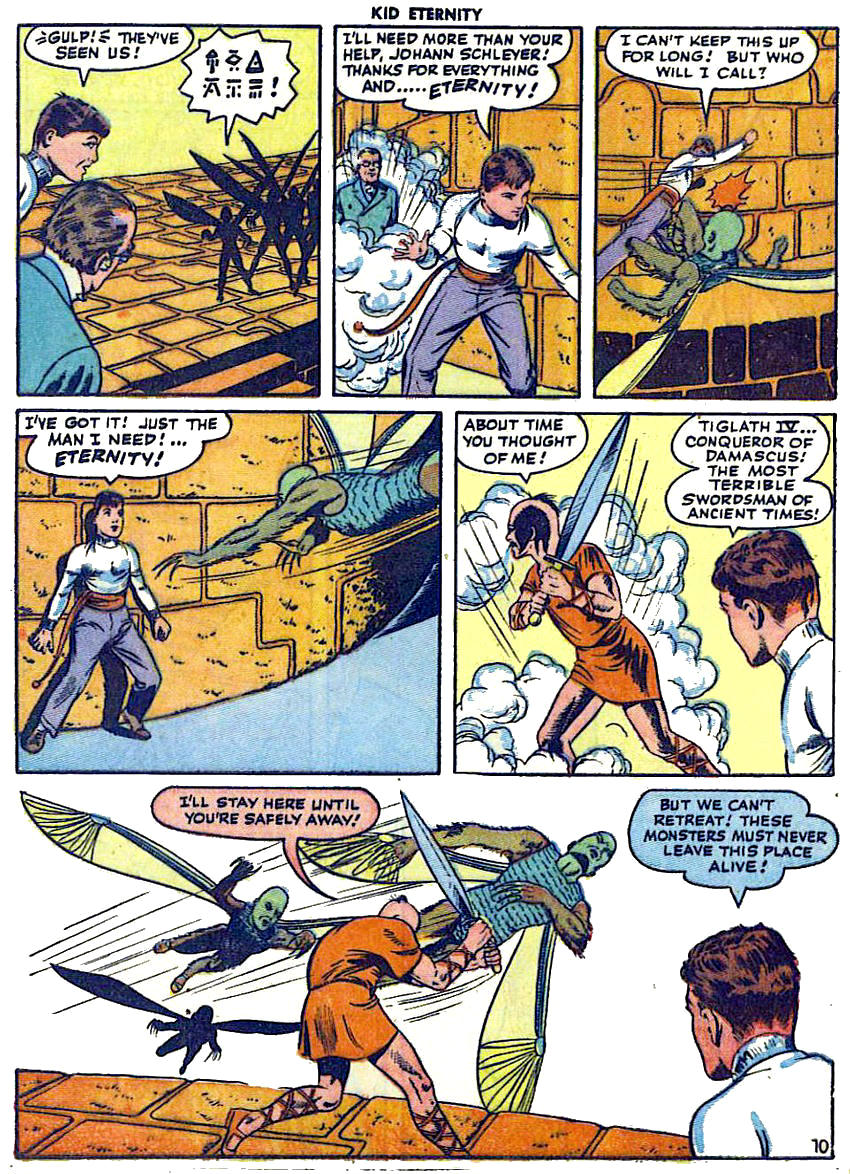 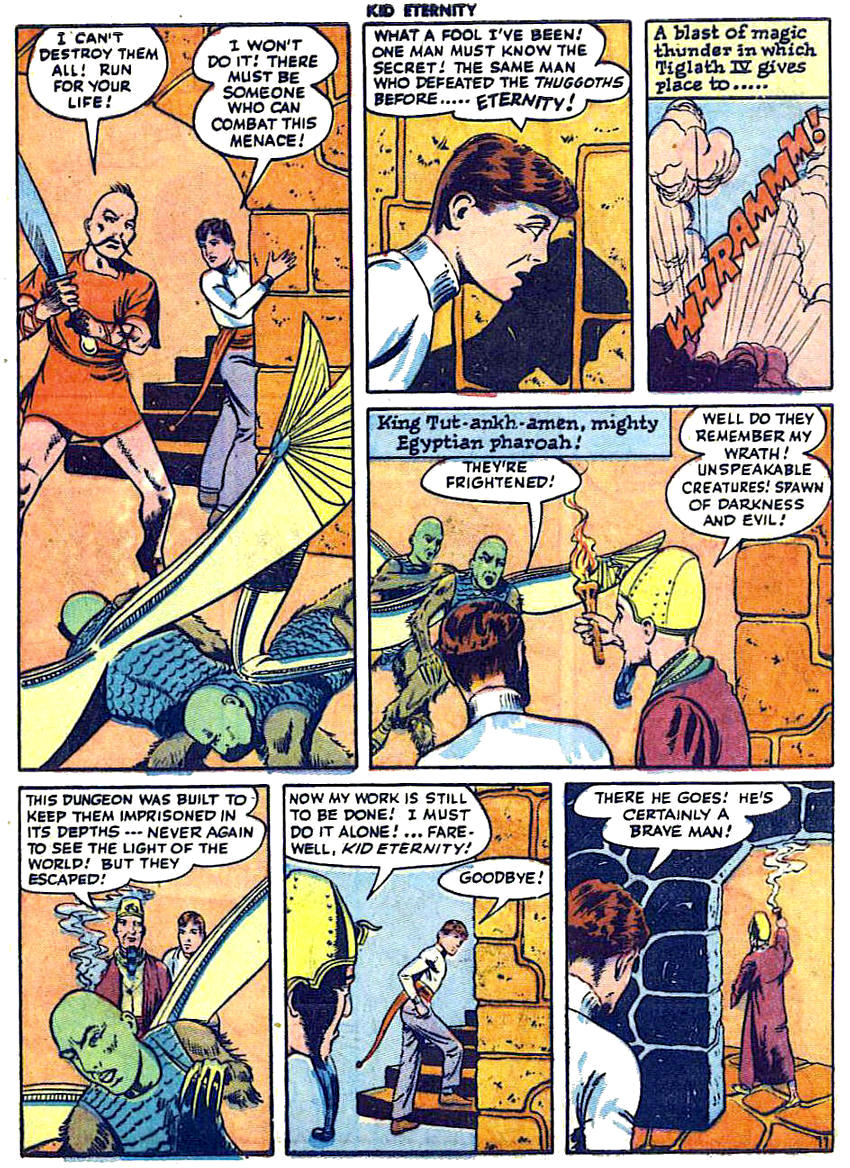 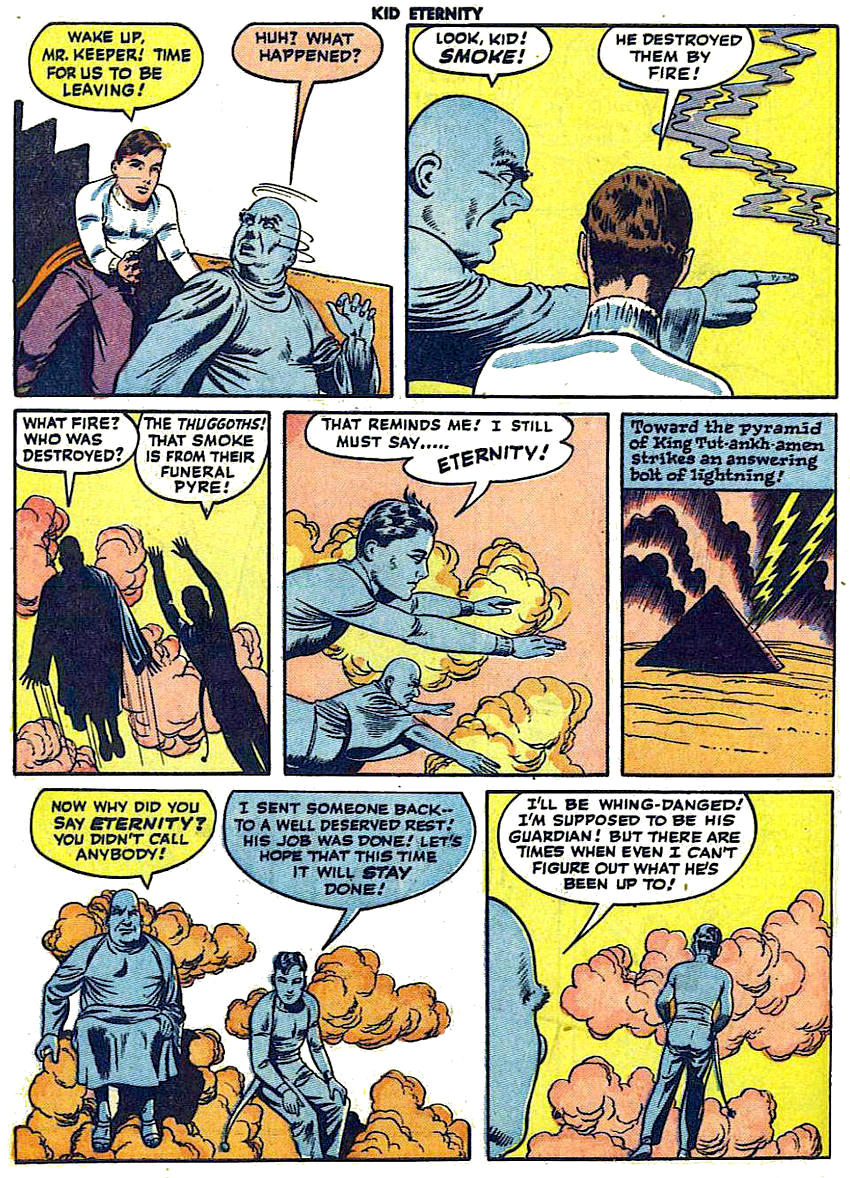 Interesting article on the real King Tut from The Daily Mail.

Uhm, if not Tut himself, then why not summon the murdered Ægyptologists?

(Should we be playing the theme from I Dream of Genie here, in recognition of a story driven by a failure to use power in obvious ways?)

Well, I think it's quite clever. Immortus have done/does/will do (Hey, he's Immortus!) something similar in a famous Avengers story. I also like the idea of creating "new" legends using older elements for inspiration, e.g. those "Thug - goths" might have been Harpies. Robert Howard and others great writers did something like that. "Thuggoths" sounds very Lovecraftian, by the way.

I just wish that people would stop calling him King Tut. Is it so much effort for people to use his full name, Tutankhamon?

You don't call Queen Nefertiti by the name Queen Tit?

So, the one thing that's interesting about the script is, obviously, how convenient it is. He's just reading about the monsters right as they escape, and even spells out their plan before they execute it. This was done, of course, to move the story forward.

But it reads as if Kid Eternity, dying for adventure, actually set this all off secretly in the background! No wonder Helper was so scared! He's just powered up a nut!

What kid wouldn't enjoy such a lax guardian? And what kid hasn't known the exhilaration of saving the world while their timid, fuddy-duddy, whing-danged guardian is fast asleep? It just goes to show that you got to get up infinitely early in eternity to pull one over on Kid Eternity.

PS: I would add that the writer had a whole splash page caption to explain the series and he didn't clarify what characters all-in-blue indicated. Maybe it meant being imperceptible to work-a-day humans. Baddies and the characters invoked out of Eternity seemed to perceive them, though.

I would give the writer credit for another fun romp in whackiness. Those old comic book creators would never have imagined folks like us looking back after all these decades and musing over their work with amusement and mild criticism. Heh.

...yes, you make a good point. Tutankhamen is his name, but probably shortened by newspaper headline writers in the 1920s.

(I like your King H8nk for Henry VIII. Thanks!)

J D, not just with this story, but based on other comic stories (some of which I have provided in this blog), I believe that several comic book scripters were familiar with H.P. Lovecraft, and used similar themes at times.

Brian, good catch. You may have discovered the secret of Kid Eternity. I'll pay more attention when I show any more from the series. Maybe we have in Kid E the equivalent of a fireman who sets fires to appear as a hero by putting them out.

7f7, now that you mention it, I assume the blue characters (including coloring on Kid E at times) would indicate they were in a ghostly state. Whereas Kid Eternity appears to be able to appear in the flesh, Mr. Keeper appears to stay in his discorporated form all the time.

Daniel, I believe an average episode of I Dream of Genie would probably make about as much sense as the average Kid Eternity story...with the benefit of seeing Barbara Eden in her harem outfit.

Wow,"Queen Tit" I'll have to remember, but "Emperor Nap" is even more funny, as Bonaparte was said to be an insomniac.

Pappy their is no difrererence btween real peeps & frictional peeps yo omg ucchh!! Kid Eternity is GENIOUS. Its baseded on New Thot philosiphy yo. What u can mamagine can B real. KE's super power is that he's dead LOL Kid Eternity is our flavor8 cartune character of all thyme exsept 4 Tawky Tawny tha Talkering Tigger Yay! <3 OMG Pappy 2day is Deb's birthday, she turns 21 agen.

Alicia, maybe someone could come up with an all-dead squad, consisting of Kid Eternity, Deadman, the Spectre, Spencer Spook, and Casper the Friendly Ghost!

A belated Happy Birthday to Deb. May you stay forever young, as Bob Dylan says.

LOL Yah Casper can B tha comededy releef. OMG chek this out: http://ifanboy.com/wp-content/uploads/2012/07/Hit-Comics-25-1942.jpg C thoze hands? Reverse-Spock hands. We found out Michalangelo used that, peeps think it's about Mary Magdalane cuz he's making upside down M's. That KE pic is by Mac Raboy who inspired Elvis w/his Capt Marvel Jr drawerings. KE is pubic domain, Debbie wants 2B in a 3D comic w/him that wuld B about how tha entire universe is actully in our mamagination Yay!