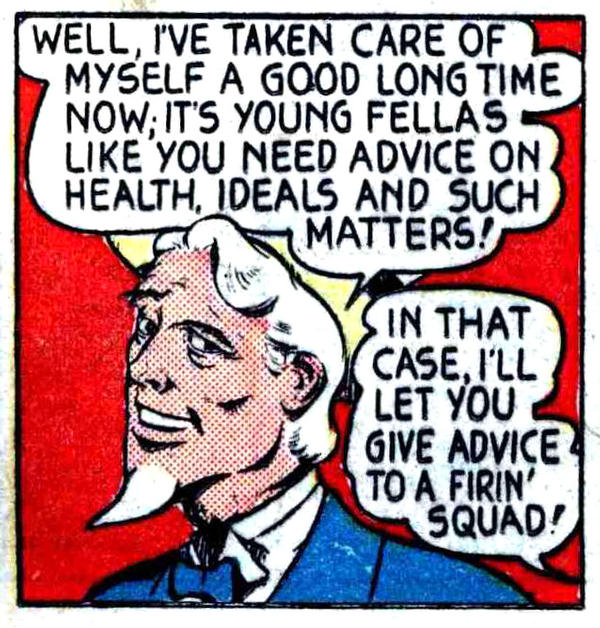 In retrospect it seems only a natural. It appears Will Eisner stole a march on his fellow comic book creators by grabbing an American icon, Uncle Sam, to be the star of a new comic book. War was going on in Europe, and the threat of involvement was reaching across the Atlantic to America. National Comics #1 (1940) presented Eisner’s version of an origin. Uncle Sam is a symbol so Eisner chose to make Uncle Sam a supernatural being, paired up with a human youngster. They fight enemies of America, internal and external. It is a tall order. This Uncle Sam did not even last out the end of World War II. My feeling is Eisner should have put him in cape and domino mask, which would have made him look more like a comic book hero. But, no. That would be blasphemy to some, wouldn’t it?

Life had a 2 1/2 page article, shown below, in its July 2, 1956 issue that shows us a different origin of Sam. According to Life, Sam had once been a “country bumpkin,” Brother Jonathan. Not a bad secret identity! Maybe Eisner could have used it. 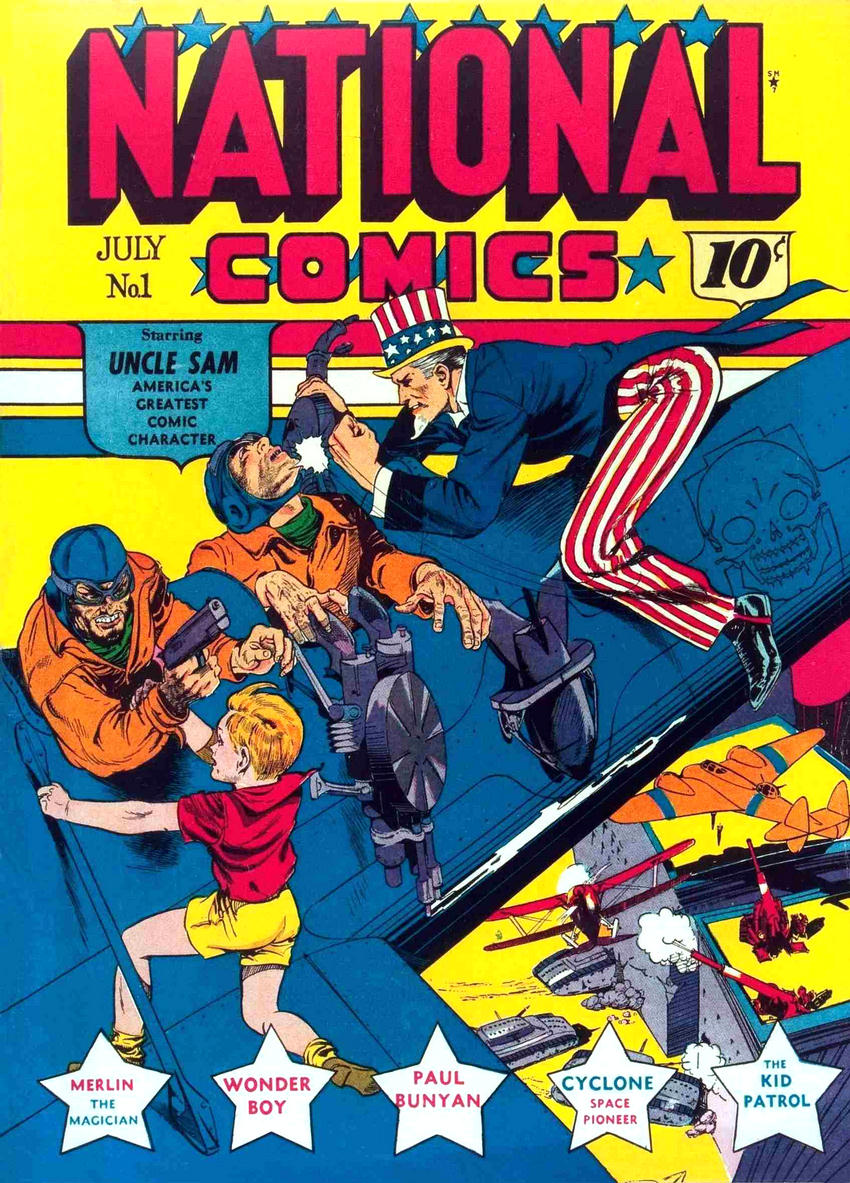 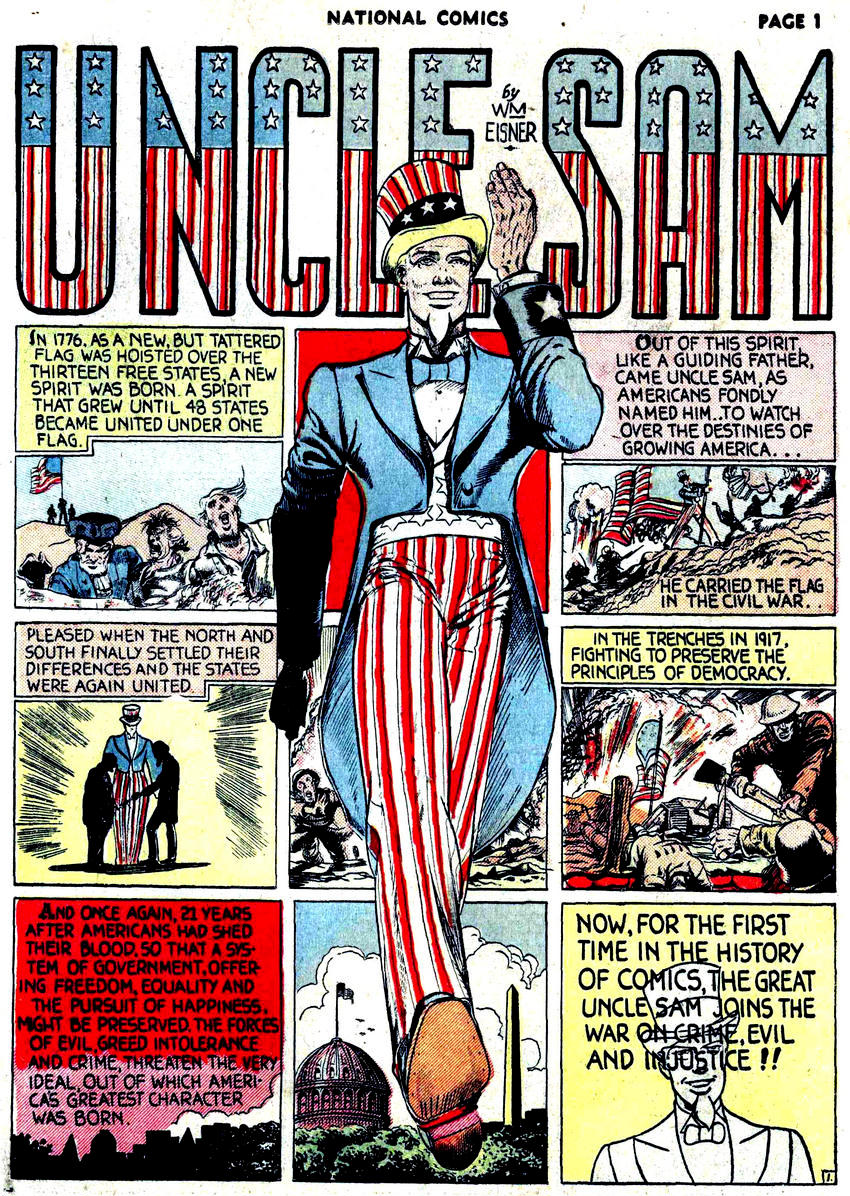 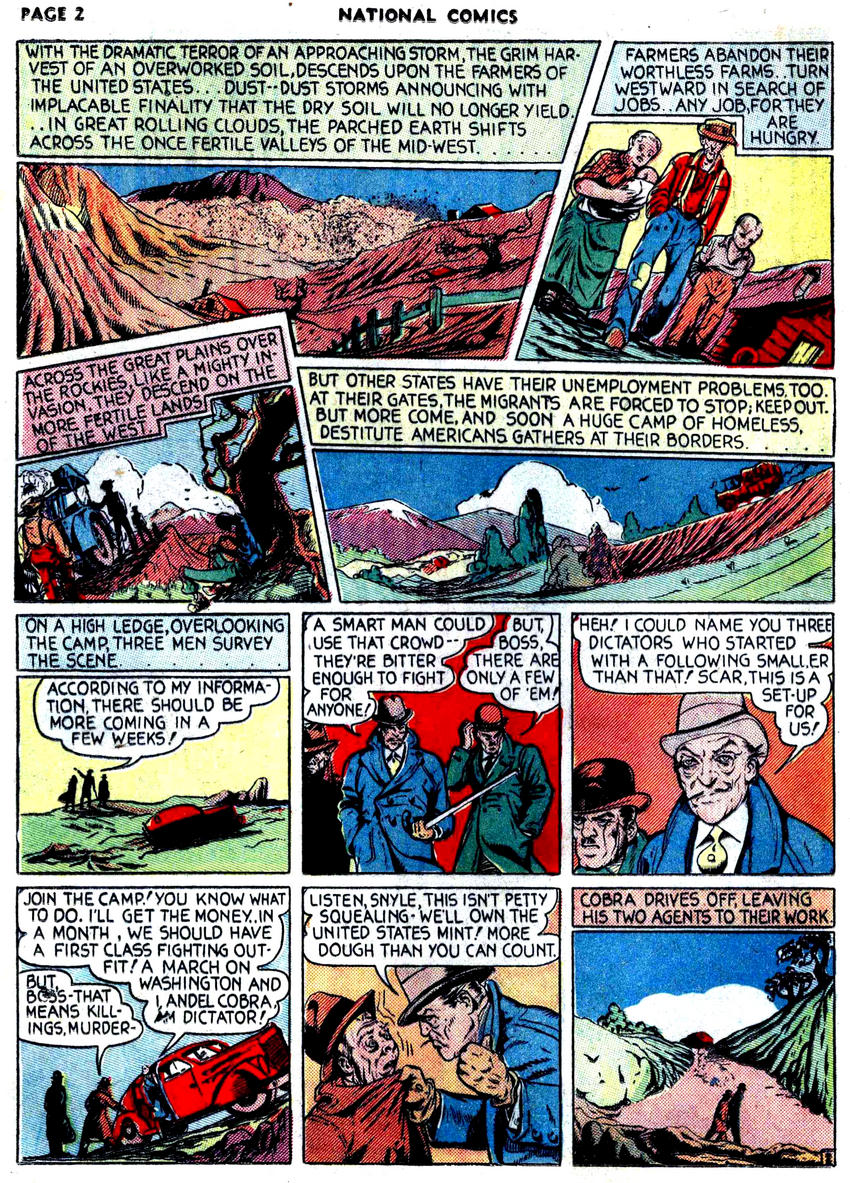 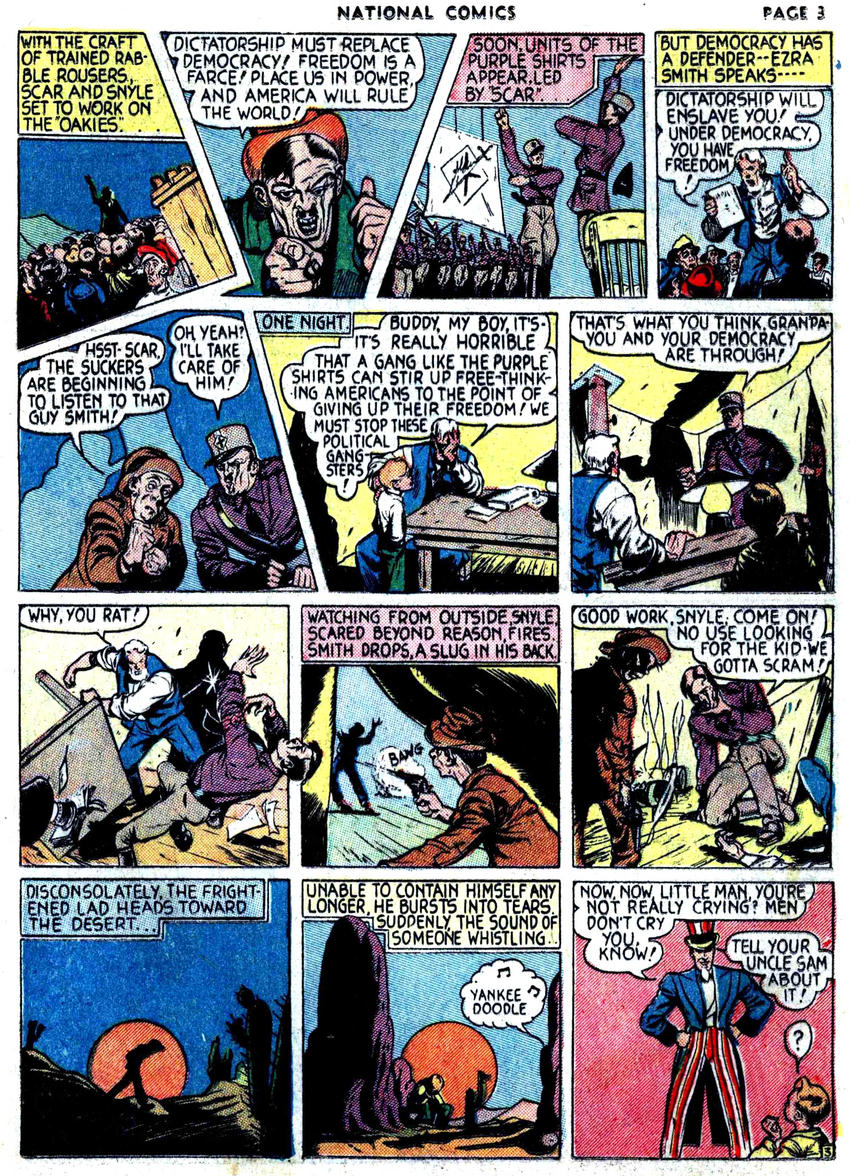 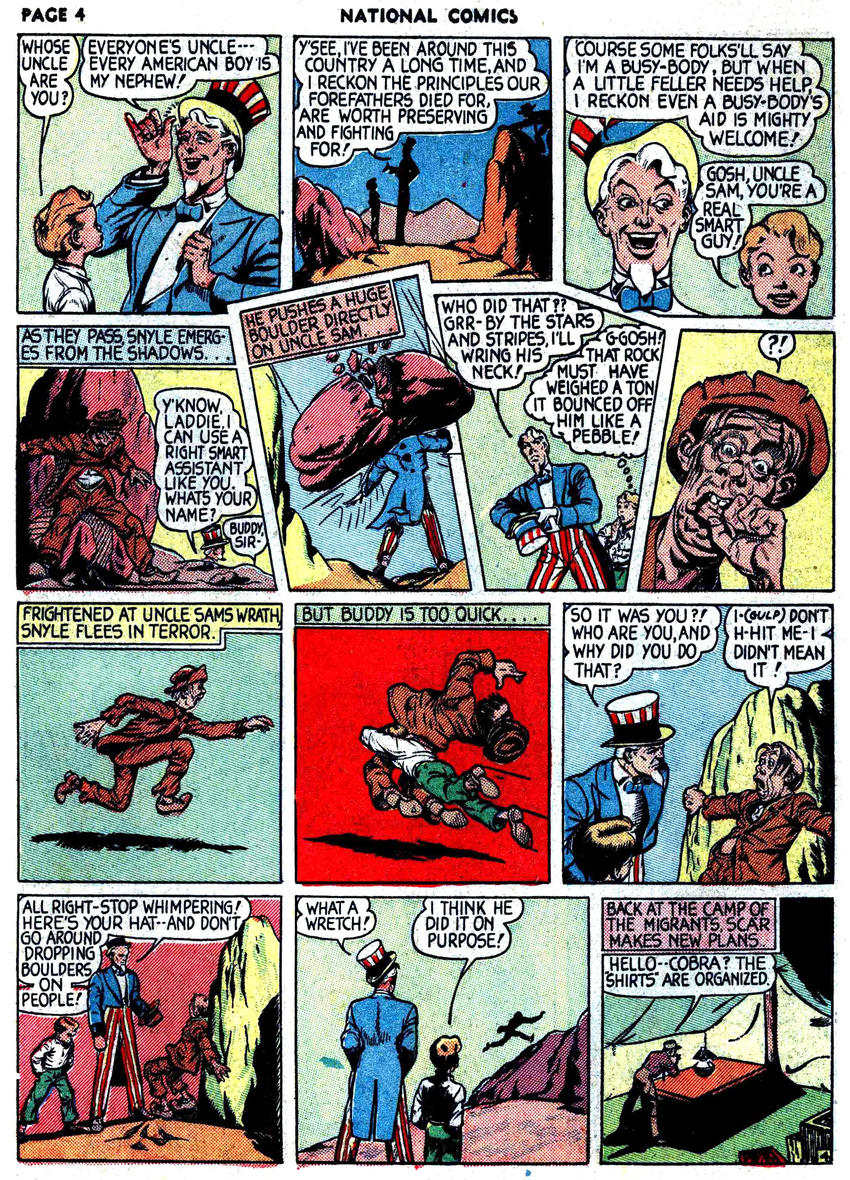 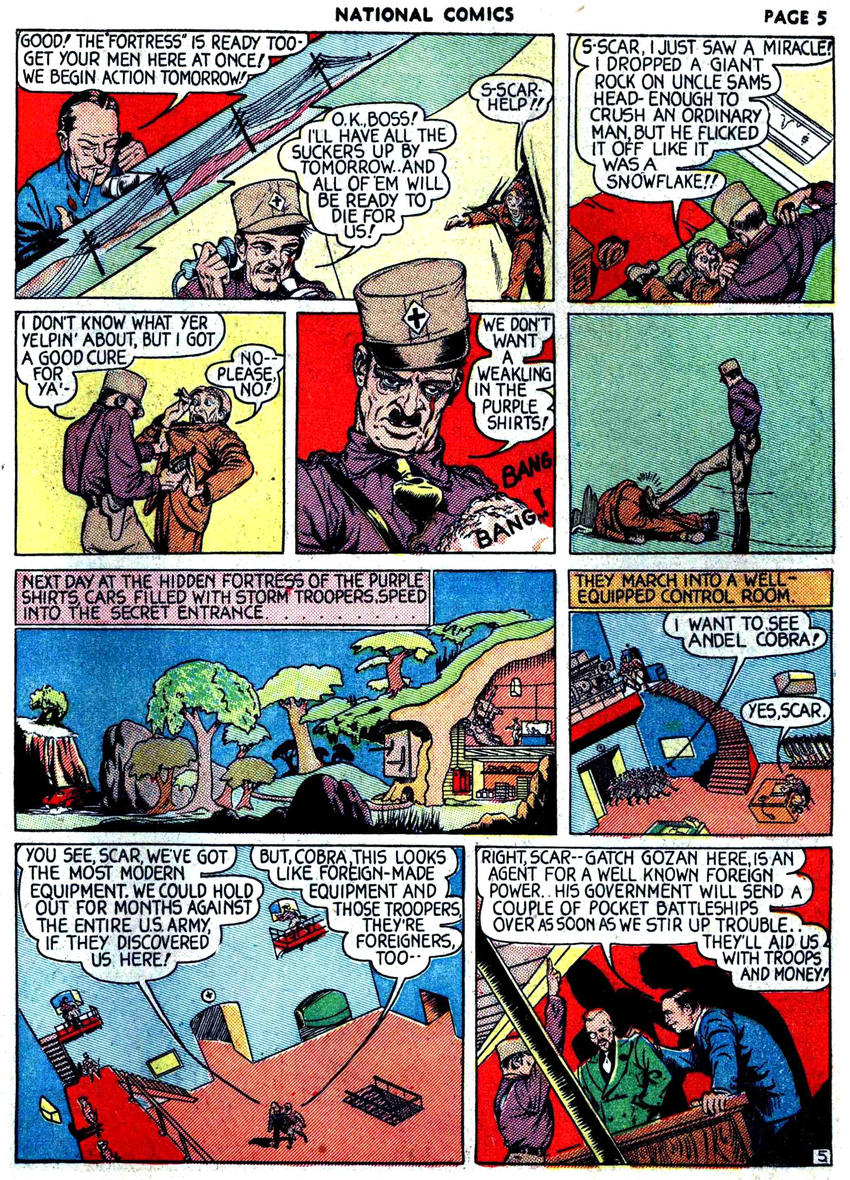 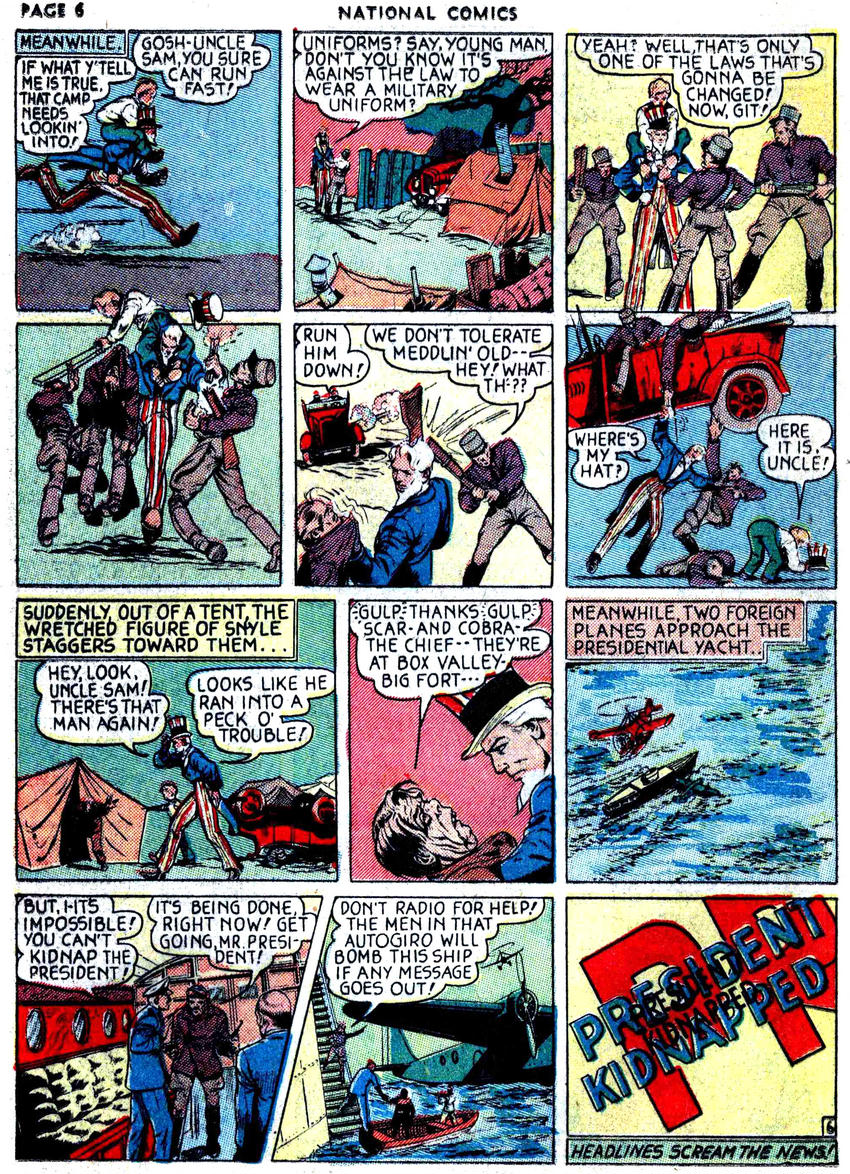 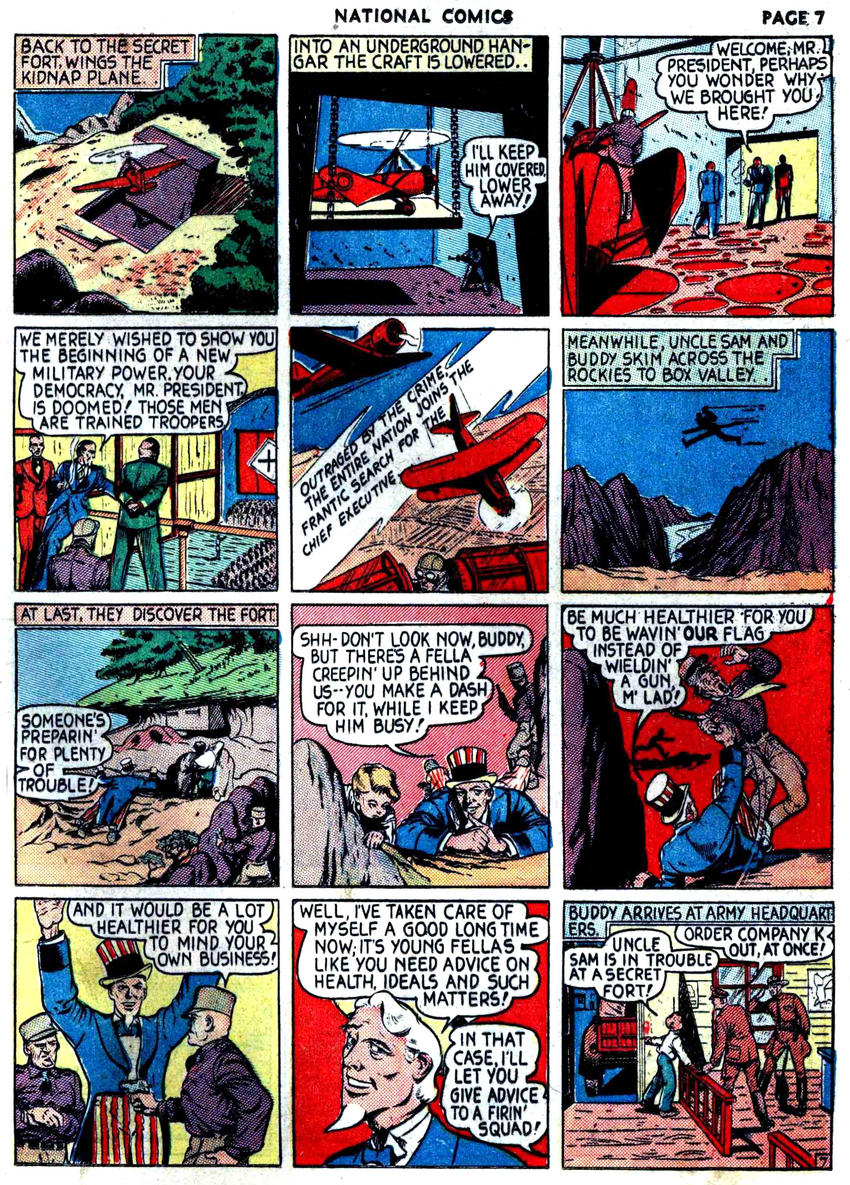 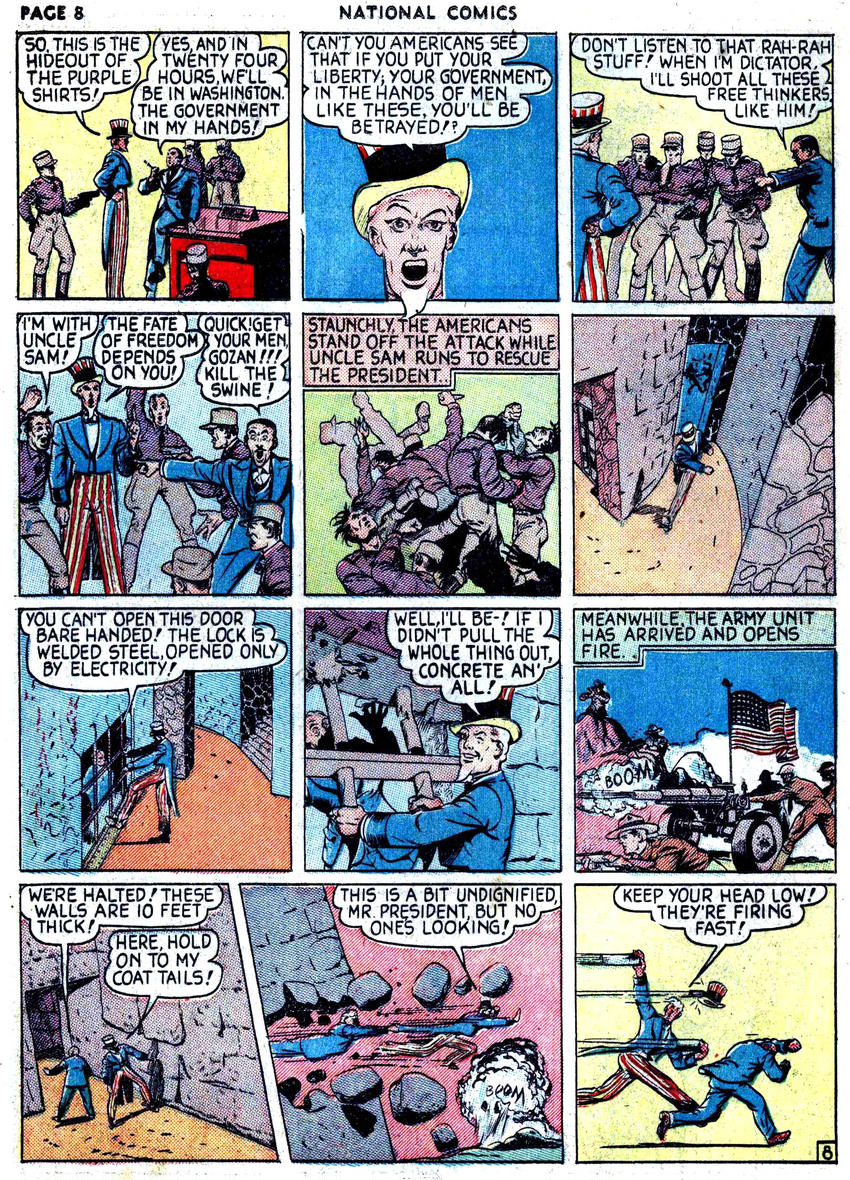 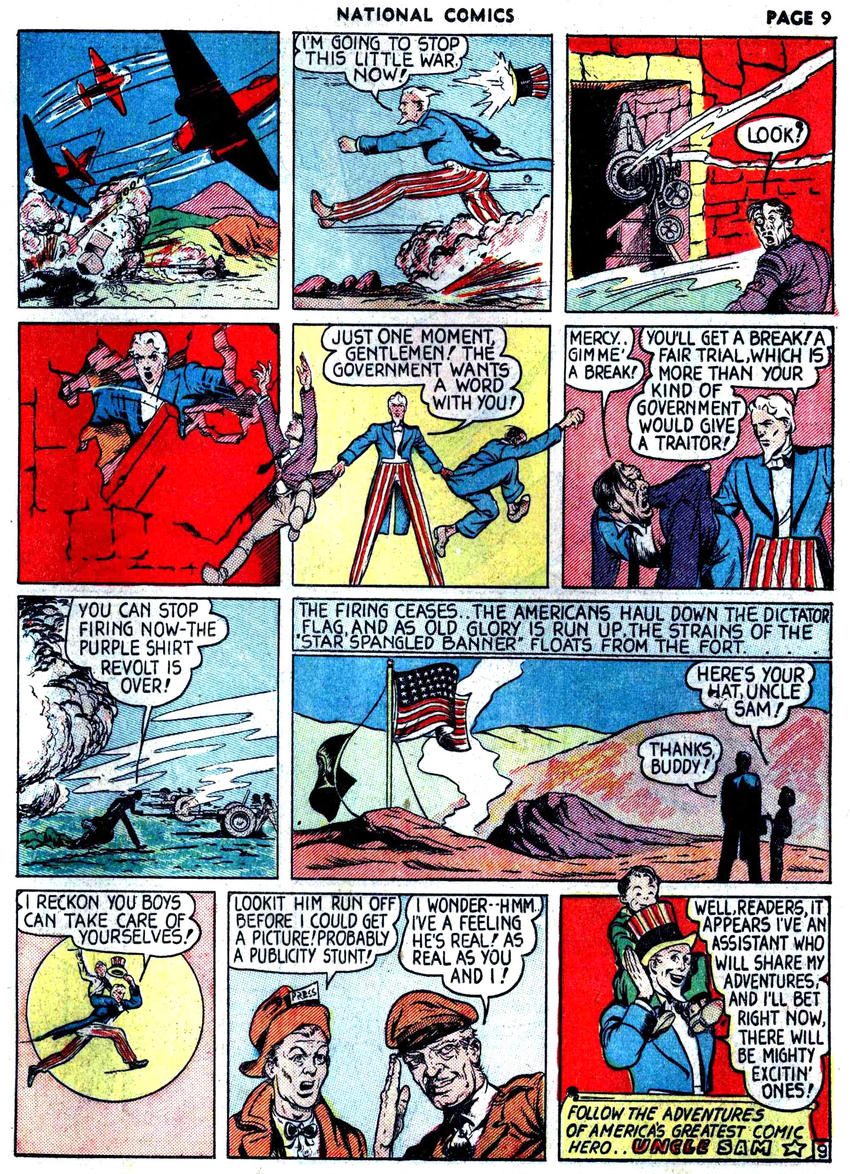 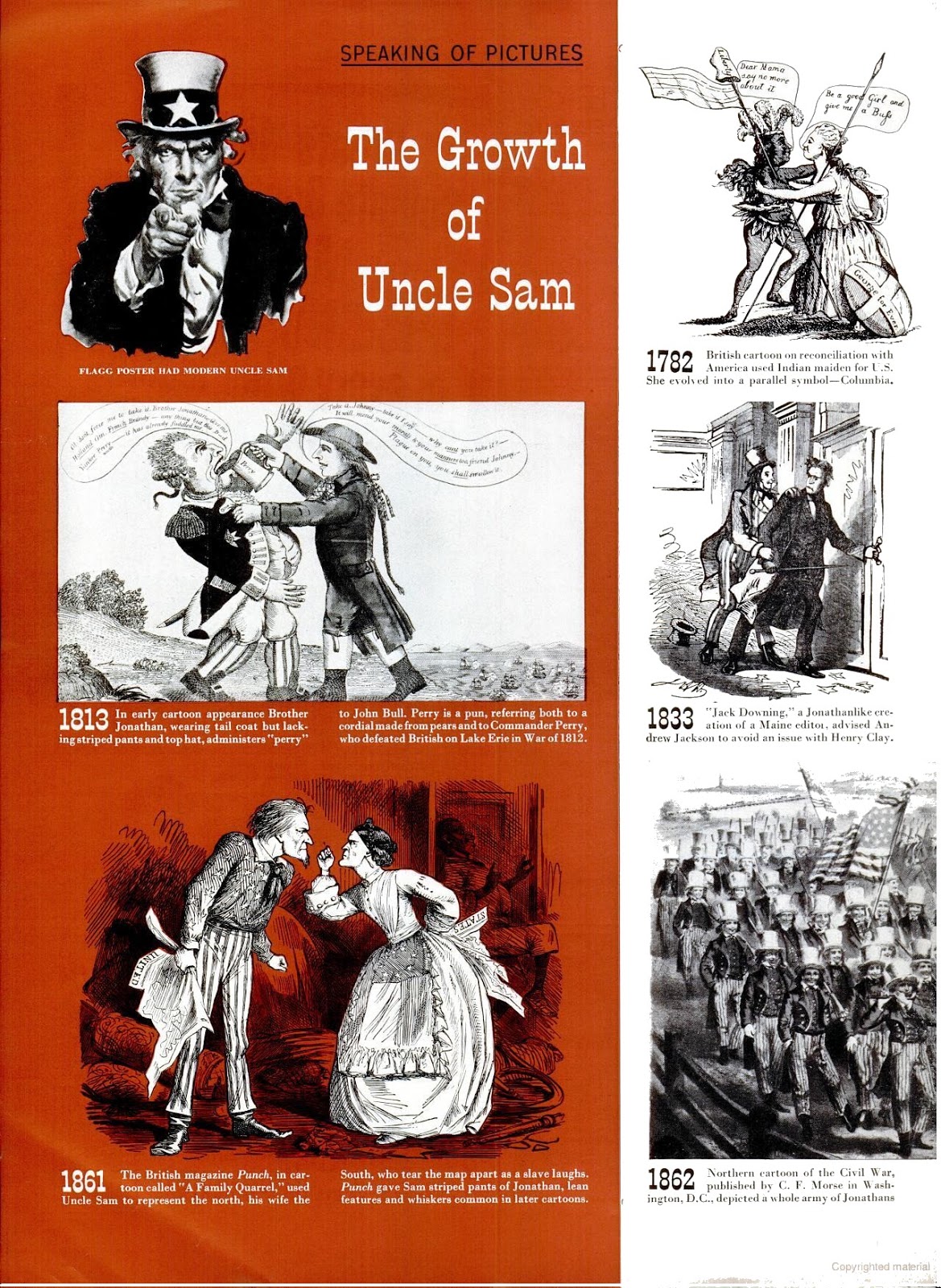 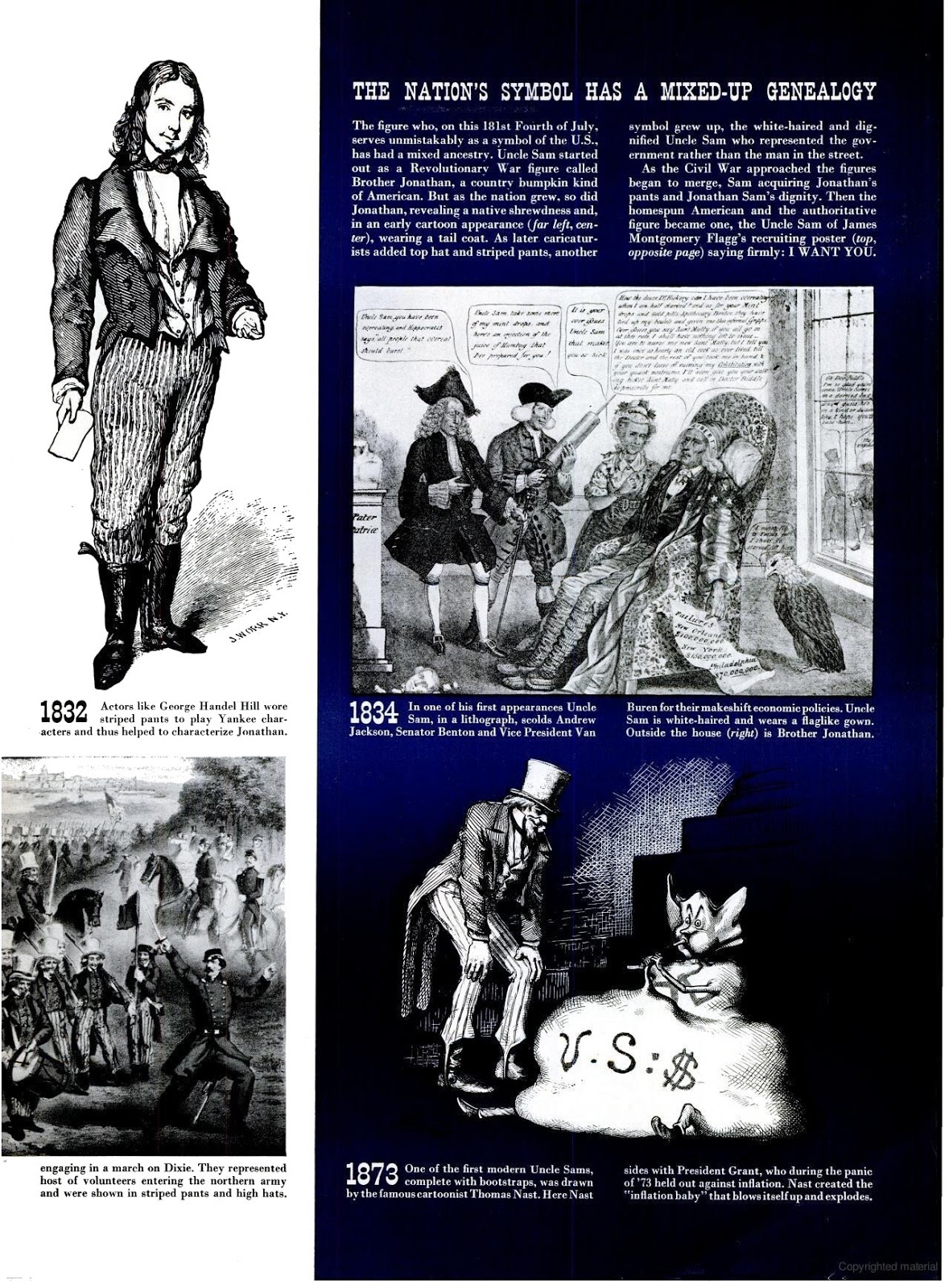 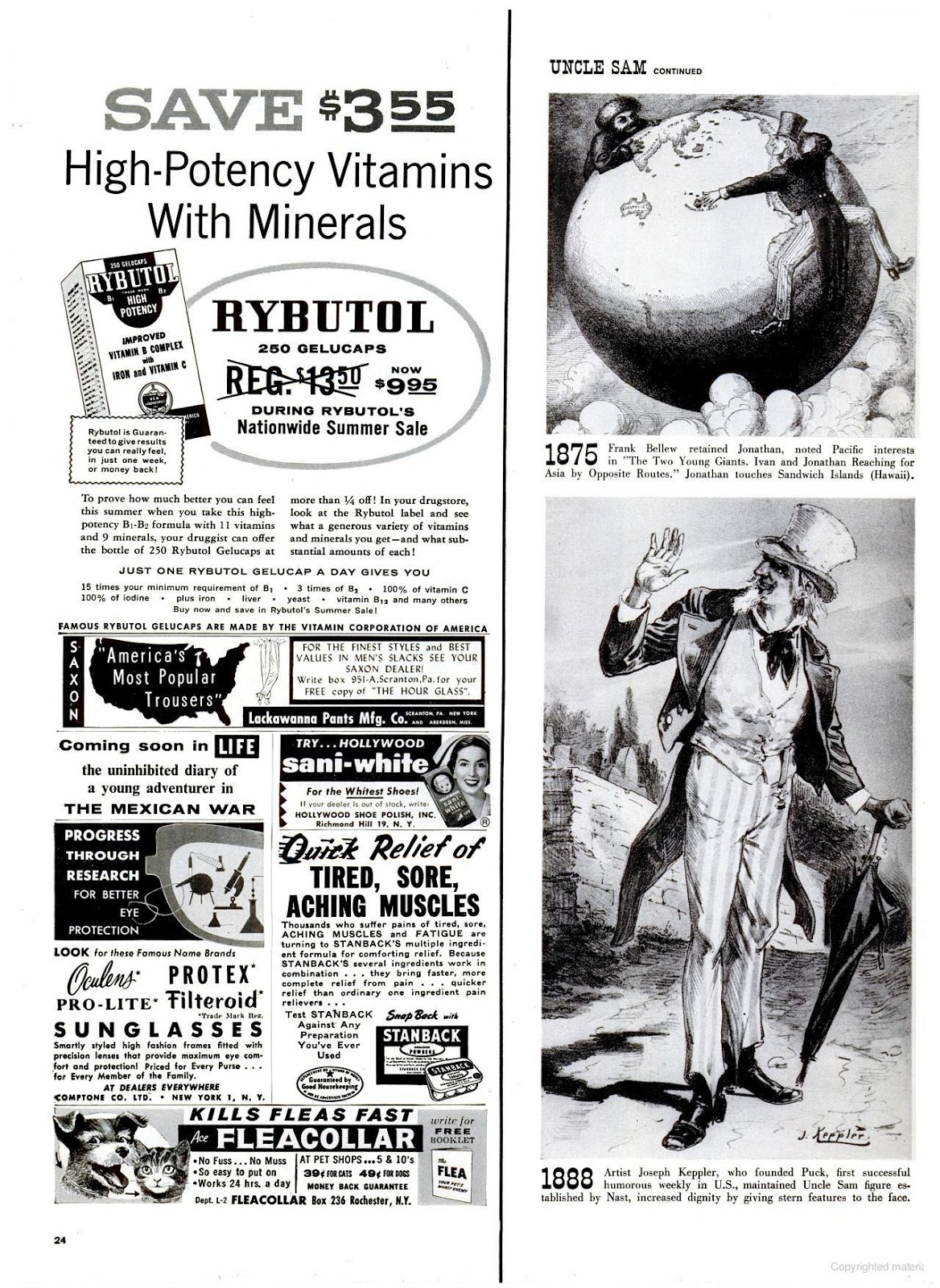 Cool story. The Uncle Sam character may look silly, but pages 1-4 represent neatly (with some understandable oversimplification) the rise of German Nazis at least until the Beer Hal Putsch. I think it's a great way to explain things to kids.

J D, Uncle Sam has always been an interesting symbol, because where he was used in times of patriotic fervor to great effect (the James Montgomery Flagg "I Want You" poster from World War I is a good example), nowadays I see Uncle Sam mostly in editorial cartoons, used in a humorous way. Looking silly is kind of what Uncle Sam represents anymore, alas.

Man, that Uncle Sam is a preachy cuss! I've read that story before and didn't notice how annoying he is. DC picked him up many years later and put him on Earth-X of their multiverse; on that world, the Nazis won WWII, so I guess Sam wasn't very effective there.
I knew about Brother John. I wanted to include him in this epic comic I've been planning, but I think someone else already used him.

Steve Darnall and Alex Ross' Uncle Sam mini for Vertigo was brilliant. Other modern attempts to resurrect the character as a superhero--including the short-lived horrifying Judge-Dredd-meets-Hawkman eyesore known as "The Patriot"--not so much.

Uncle Sam seems to have got his beard from Abraham Lincoln. In an editorial cartoon, Lincoln was costumed as Sam, and thereafter Sam sported a beard.

Alicia, now that is a trio! You two and Lady Liberty!

Daniel, seems a natural, though, doesn't it? Men in those days were like they are right now, bearded. It would follow that Uncle Sam would sport a furry chin.

Beards go in and out of style. It doesn't affect me. Except for rare occasions, I have worn a beard since 1969.

Ryan, I still have my issues of Freedom Fighters from the seventies, featuring Uncle Sam. I haven't read them in many years. After looking them up online (easier than going to my — shudder! — basement where my comics are stored) I realized I had the storylines confused with the Golden Age heroes of the All-Star Comics revival of the same time.

You say the Nazis won the war?!

@Pappy: In the JLA/JSA crossover that first introduced the modern comic world to the Freedom Fighters ("Crisis on Earth-X!"), the FF were Earth-X's last surviving heroes in a world where the Axis won World War II.

After the combined forces of the League, Society and Fighters toppled the Axis, they apparently got bored really quickly and migrated to Earth-One in Freedom Fighters #1 in search of excitement. (You'd think an entire planet steeped for decades in Nazism abruptly losing its world government overnight would result in plenty of "excitement" for its handful of metas, but hey, comic books. Unfortunately, the multiverse was merged before the FF could return to their forsaken homeworld to see what happened after they abandoned it. I bet it wasn't good.)

BillyWD: Well, no wonder I wasn't on the "in" of Earth-Nazi, because I don't have that JLA crossover issue.