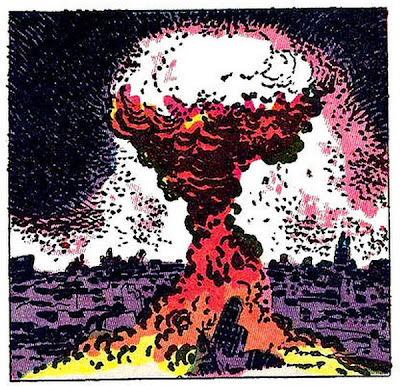 The most fearsome weapon ever built by humans, the atom bomb, caused a lot of postwar jitters, both in the U.S. and around the world. There was fear that someone could build a bomb, pack it in a suitcase and detonate it in a city. We still worry about that, but nowadays we have all kinds of terrors to worry about. Nuclear devices are amongst our list of fears, but not like they were in the late '40s and early '50s. 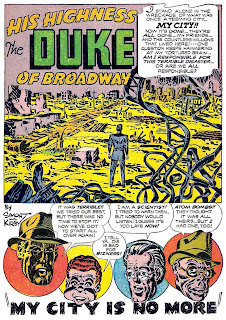 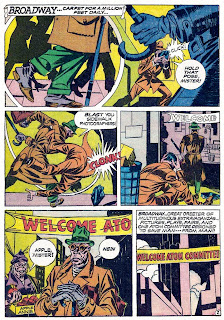 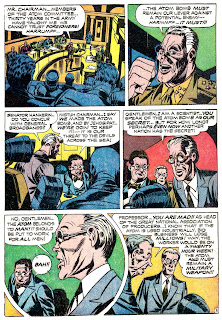 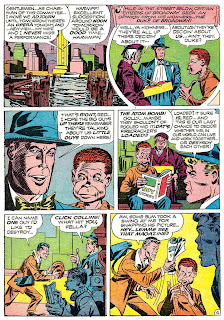 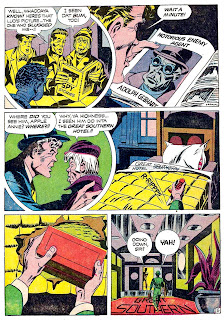 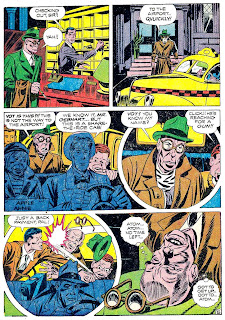 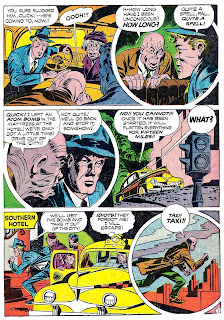 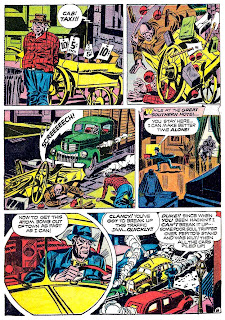 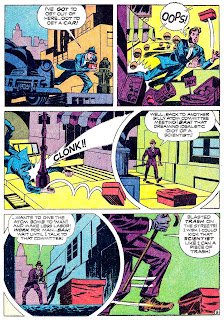 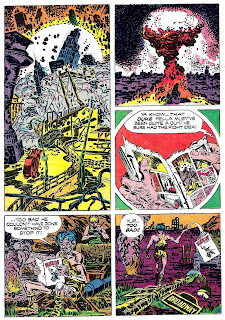 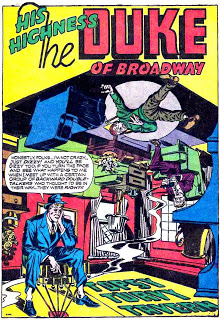 Notice on page one that Simon reverses the POV of each panel, except the last. I have to wonder if launching a story with rapid-fire revere shots serves a good purpose here, since I'm writing this, instead of finishing the story.

Yikes. That was pretty heavy--not just the downbeat, rule-breaking ending that was ignored the following issue, but the fact that it happens because the "hero" trips and headplants into a street lamp. That's not exactly Kiss Me Deadly.

Naturally, I love it.

There's a lot of politics in this, and even when I disagree (not in this case), it's always fun to see the author putting out his view point.

That said, though, Simon should have tried a little harder than "using atomic bombs in industry will give everybody a 20 hour work week." It'd more than likely give them a 0 hour work week as they would have been blown to smithereens!

Paranoia strikes deep, eh, Pap? Great stuff as always. The fifties were such a strange time of loving the potential of atomic power, and the primal fear of the such a nearly biblical weapon of destruction. This captures it perfectly.

For the first few years after the nuclear bombings of Hiroshima and of Nagasaki, American attitudes were characterized less by fear than by an effort to depict the atomic bomb as some sort of boon to mankind. It was when the Soviets first detonated one (29 August 1949) that most Americans were compelled to consider these devices more realistically.

This story was ahead of the wave in acknowledging that American cities could be destroyed by nuclear bombs, but it's otherwise dumb.

We're supposed to see the problem in the attitudes of some members of the Atom Committee, but no change in those attitudes could have stopped Adolph Gebhart.

(And does one really imagine the spokesman for industrialists appalled by the thought of being able to substitute capital for labor? Yeah, somebody won't like that idea, but it won't be the employers!)

Some great comments on this posting, and I've decided to just let the readers have their say.

About the only thing I can further contribute to the discussion is that nuclear paranoia pops up now and again. It did after 9/11, it was there during the '80s and it was sure there in the 1950s. I don't know if I worried more or less than my fellow students, and maybe I was the only one really worrying, since I tend to internalize external fears.

I've probably mentioned this before, but in retrospect I find the amount of lies from authorities staggering. On the one hand civil defense officials were telling schoolkids we could get under our desks and survive an atomic blast, when they knew the effects of even small devices on the cities of Nagasaki and Hiroshima and that within a certain blast zone we and everything around us would be vapor.

The idea of a small suitcase nuke being detonated in a city like New York was floating around. Philip Wylie wrote a book called The Smuggled Atom Bomb, published in 1951, and several later books used the theme. There's no telling how many Sunday supplement articles or science fiction magazines had stories using a variation on the theme.

Pap: Regarding the oft-ridiculed civil defense shorts instructing kids to get under school desks - this strategy was employed because the effects of Hiroshima were studied intently. Of course, a fetal position under a school desk would not safe anyone at ground zero. It was discovered, however, that many people were killed when buildings collapsed on top of them far from the center of detonation. Those that had survived had been found under the protection of desks and other heavy structures. Thus, the civil defense films instructing school kids to crawl under their desks. If not at the center of the blast, it at least offered the best chance for survival. A wistful hope, to be sure. But at least not as ridiculous a strategy as is so often assumed.

Mykal, there might be a perception of safety, but unless there are other factors in play it creates just an illusion. Having children hunker down under their desks might have been a best chance to survive, but is far from sure that anyone would. Buildings must be fortified, and before tougher building codes that just wasn't true. As an adult I worked for the same school district in which I was educated in the fifties and sixties. When I went to work for them in 1976 they were in the process of replacing buildings built in the twenties back through the 1890s! They were not prepared for any kind of attack or natural disaster. Consider the unprepared schools in Oklahoma hit by a tornado just recently which were gambling on luck or providence to avoid disaster, and lost the bet.

My local schools weren't prepared for earthquakes, and we live in a seismic zone with a major fault line under us. They are mostly up to code now, but it has been a decades-long and expensive process.

While I appreciate what you have presented, and it could be true in some cases, it wouldn't have been true had my school been anywhere in or near the blast zone.

And actually, my real complaint is with the government officials who gave us hope that when the Russians dropped bombs on us that we could survive with simple techniques rather than a massive upgrade of our infrastructure. They also tended to downplay the effects of radiation, which they well knew from Hiroshima and Nagasaki, and they allowed open air testing, sacrificing downwinders in Southern Utah, for example.

Mykal my friend, don't make me say more on this subject. It's bad for my blood pressure!

You got it, Pap! Back to the comics!